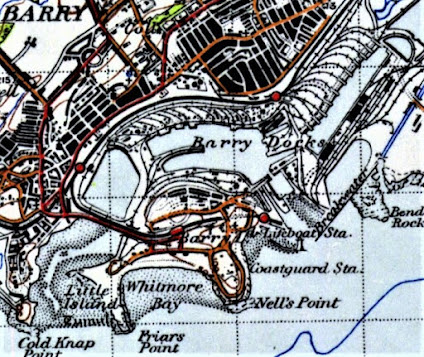 The four stations at Barry in South Wakes were Barry Docks (just above the label "Barry Docks"), Barry (the town station (although never called "Town"), Barry Island (label "Barry I") and the fourth just above the words "Lifeboat Sta". This was Barry Pier station which will be the focus of tomorrow's blog. 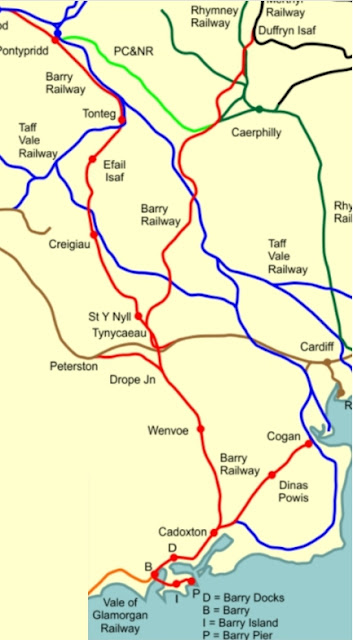 ... was one of the many companied making money out of transporting coal to the docks, those at Barry being part of the railway company's business. With the enforced "grouping" of the railways in 1922, the Great Western Railway sought to rationalise its operations in the valleys and freight was concentrated on the routes of the former Taff Vale Railway (BLUE).
In 1909 about 8,000 women and 10,000 men were employed in the docks, and by 1913, the docks were the busiest coal port in the world, exporting over 12 million pre-metric tons (per annum?) at peak. Coal exports declined after World War I (1914–18). Strikes and the Great Depression of the 1930s caused further problems.
The area around the first dock, now called The Waterfront, has been redeveloped for residential and commercial use. 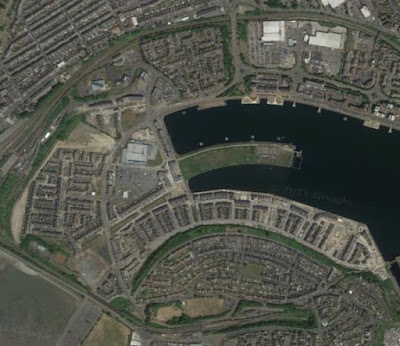 Parts of the docks have become industrial estates such as the Atlantic Trading Estate, 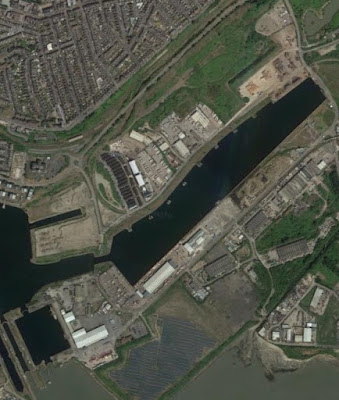 The second dock is still active and generally handles chemicals and timber.
Three of the original four stations are still open. Barry Docks has lost all its buildings which were on a broad island platform. 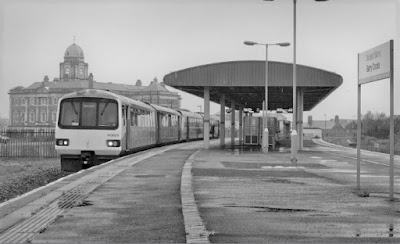 The entrance was either from a steepish ... 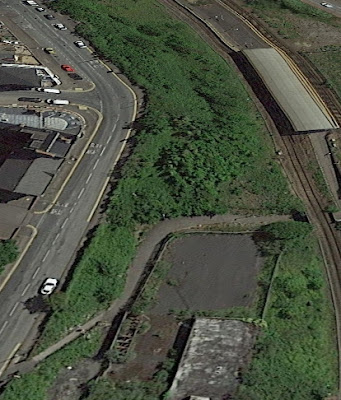 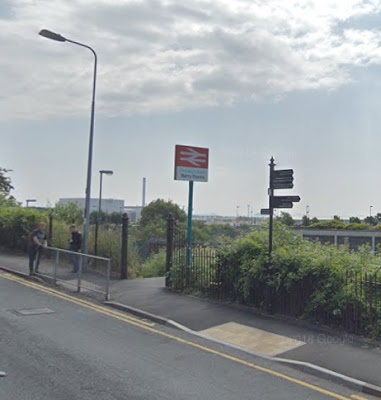 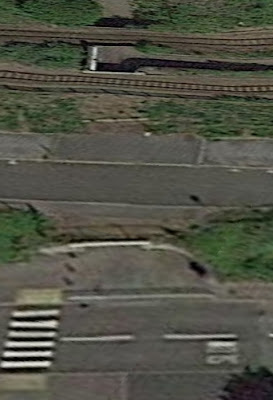 ... from Millennium Way to the south. 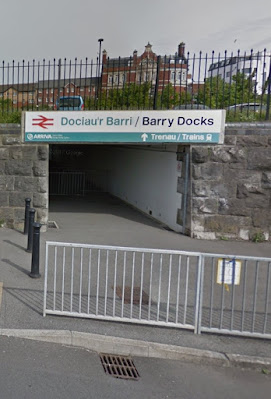 Spooky!
There are lights on the platform and really lavish illumination of the ramp up from the tunnel. 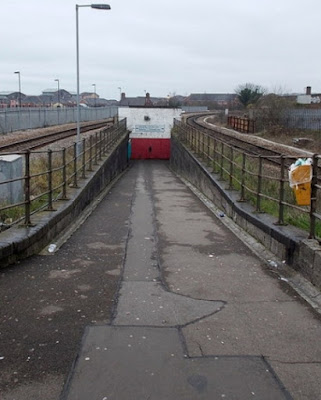 The posh building in the background above is the former Offices of the Barry Docks and Railway. 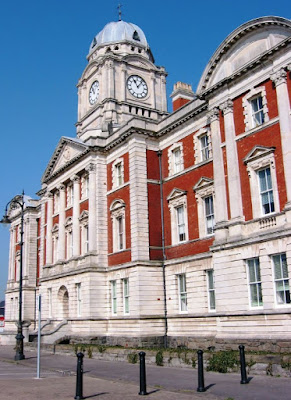 Wow! There sure was money in coal!
Barry (town) station has gained a more modern station building ... 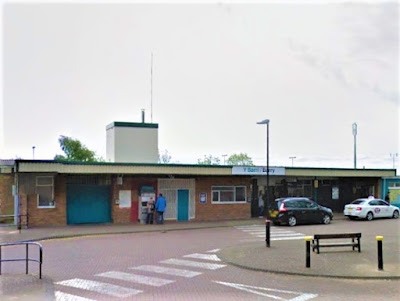 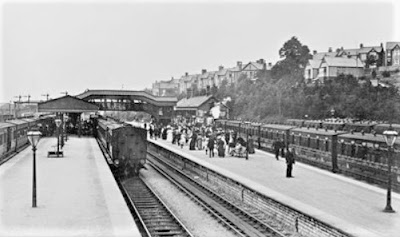 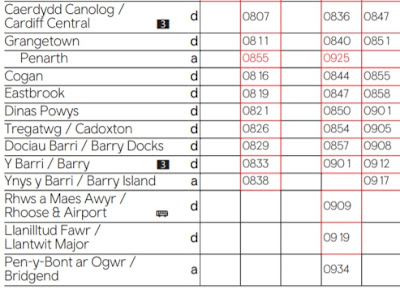 We looked briefly at Barry Island station previously; but, because of seaside day trip traffic and Butlins Holiday camp, it was the biggest and the busiest of all four. Looking back towards the fairground (which peeps in top left) in the 1960s we have three platforms, all with canopies, AND a diesel depot! 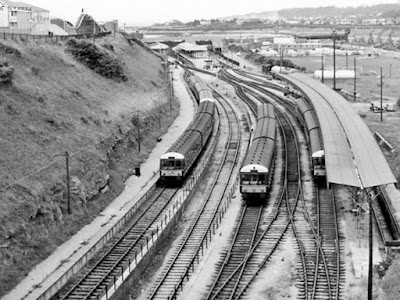 The DMU on the left of the above snap is standing at the former excursion platform, extra-long to take full-length excursion trains. Note also the former broad footbridge to help move the crowds. 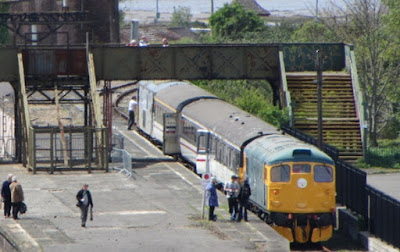 Crowds would come by train to Butlins, whose holiday camp filled the promontory beyond Island station. 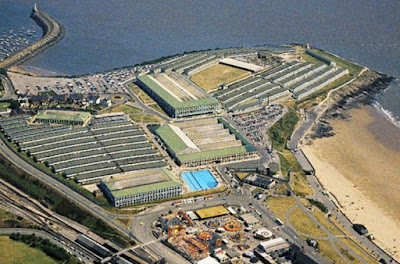 Now replaced by housing, the weekly exchange of crowds is no more. 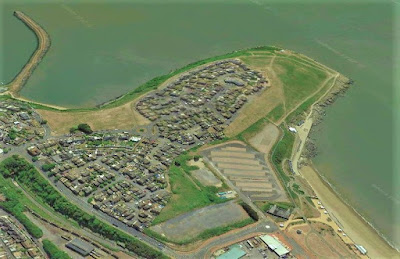 And we have already seen that the fun fair is but a shadow of its former self. The new owners have brought in new rides, but they are mobile showman's rides that come on the back of lorries. The spectacular fixed excitements have all gone.
At the tip of the "Butlins" promontory is Nell's Point where is located a lookout station manned by the volunteer "National Coastwatch". 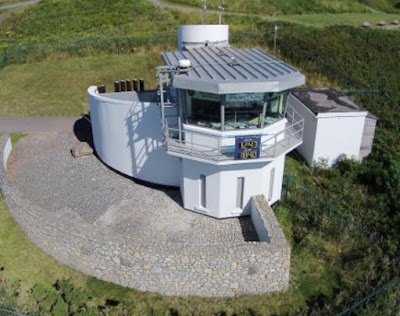 From here the staff on duty have a view across the Bristol Channel towards Weston-super-Mare, Bridgwater, Minehead and Ilfracombe - all nice places for a boat trip! 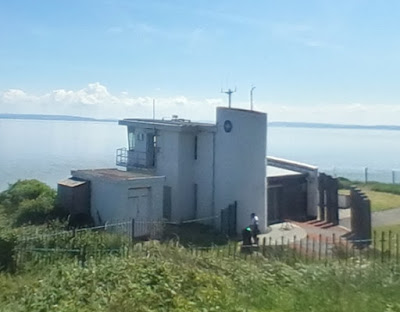 But look closely at the diesel depot picture above. One track seems to be dipping down between two kevel sidings. 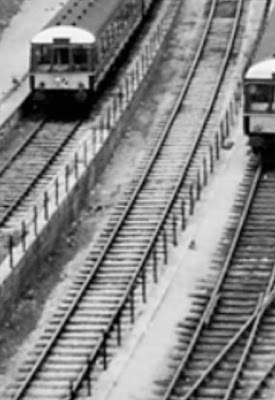 That will take us, in tomorrows posting, to the fourth Barry station.
The "Beacon Of Green" 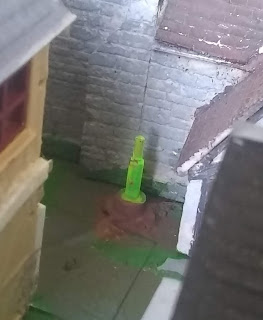 This unusual piece of modern art, recently installed at St Hardulph's Church, which sits above the tunnel used by Peterville Quarry Railway, was awarded for the church's work to turn its ancient building into a Zero Carbon establishment. Made of recyclable plastic, it is illuminated at night and accompanied by a plaque on the side of the porch. 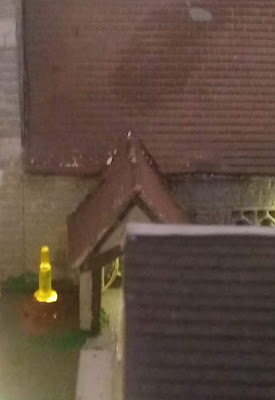 Not only is the 4mm to the foot ecclesiastical edifice proud if its award, but so is fbb for inventing the idea! 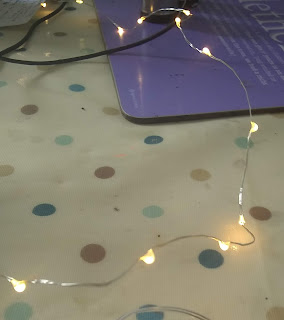 Using strings of very small LEDs, ready wired to their battery, seemed a good idea to fbb - but it did mean that the buildings had to be fitted to the lights and not vice versa. It was easy for the carriage shed and platform canopy as they were just straight runs plus bits of buildings at the end.
But the church/pub combo was more difficult; and, however your author pulled and poked the string of lights, there was always one left on the floor between the back wall of the pub and the church porch. 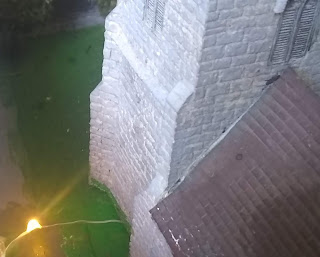 Then, taking after the late No 2 son, the old man had a jackpot idea! Glue the LED to the "ground", pack it round with a few plidgets of plastic and find something transparent to make a light tube.
In the box of miscellaneous bits that might one day come in useful, was something that did come in useful. It was piece of dayglo green tinted "space" Lego. Snip off the end, glue to the LED, surround with some "earth" and ... 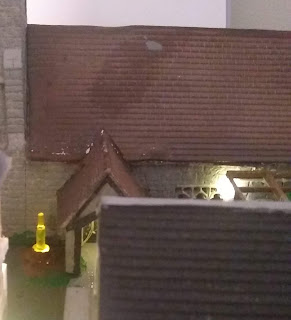 ... the "Beacon of Green" shines brightly through the dusk that sets over the station and village. It is these occasional (VERY occasional!) flashes of creativity which make railway modelling such a delight.
But do not get too smug, O elderly one. Proudly fbb showed his "work" to Mrs fbb; "Oh that," she riposted, "it looks like a bit of Lego to me!"
Next Integrated Transport blog : Friday 9th July
Posted by fatbusbloke at 02:00