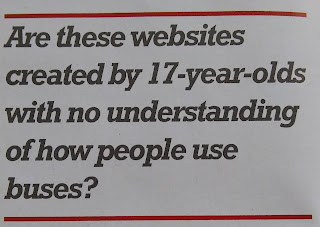 You could say the same about information screens, as in this one at the Royal Devon and Exeter Hospital. 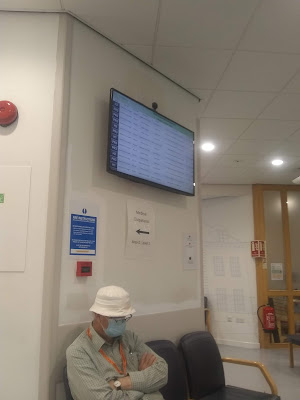 The text is far too small, that much is obvious at first glance, but the screen is plonked on a "convenient" blank bit of wall without a large-print label so is easy to ignore. There is, of course, nothing electronic at the bus stops ... 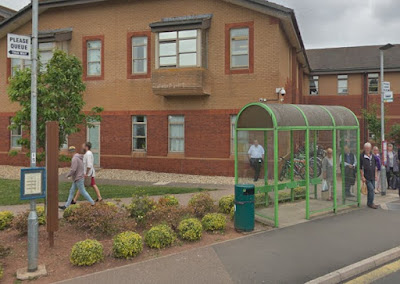 ... but the timetables in frames on the stop poles do appear to be up to date. Unfortunately due to subdued and relaxing light levels in the reception area and fbb's occasional shaky hand, his enlargement of the screen leaves a lot to be desired. 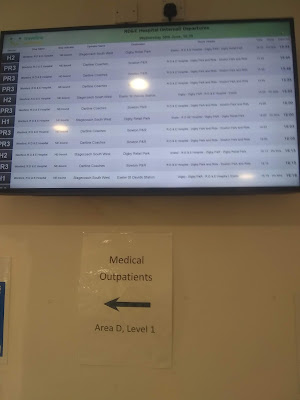 Down the left of the screen is a list of route numbers, as usual these appear in departure time order which is not as helpful as it might be if you are looking for a specific journey. But at least the text is BIG! 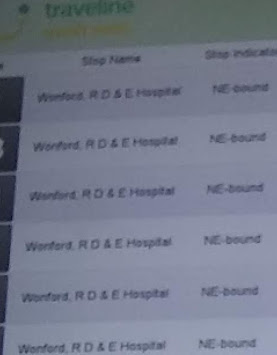 ... which gives the potential passenger the essential knowledge the the bus will will be north east bound. All bus passengers will, of course, be carrying their very useful Silva compass ... 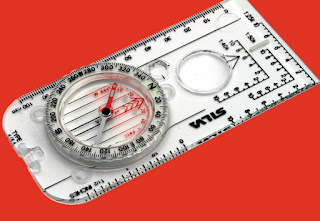 ... so they can check that they are on the bus pointing in the right direction.
People can be a bit confused after a trek into the darkest jungle of the hospital corridors, zones and lifts, but fbb thinks that the majority of patients and visitors (i.e. those who have come by bus) will not need telling that they are at the Hospital's main and obvious bus stop!
The next column on the screen ... 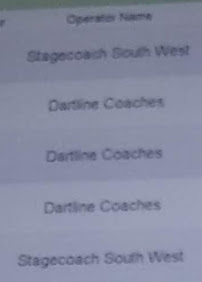 ... tells which company operates the bus. Another piece of essential information as there is so much choice. Why not keep it simple and say "Dartline" or "Stagecoach". In fact the operator name is also unnecessary.
Poor camera work makes the rest too fuzzy to see but fbb can de-fuzz virtually! We have a destination ... 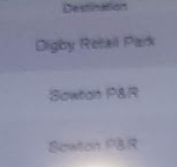 ... a route summary including the destination again ...

... a scheduled time and an expected time, usually the same! You can just see that ALL the buses go to R D & E Hospital which is where you are! Useful eh?
Stagecoach buses could be going to St David's Station via Central Station ... 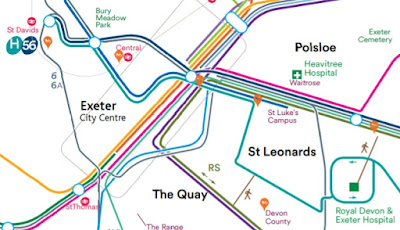 ... although Central doesn't get a mention. OR they could be going to Digby. 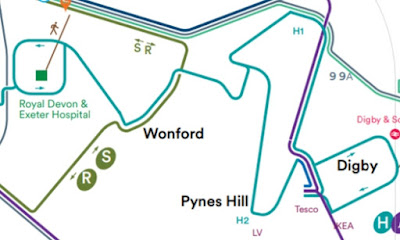 The timetable shows that there are two buses an hour to Digby ...

... and for most of the day a further two buses an hour run between Hospital and the city. 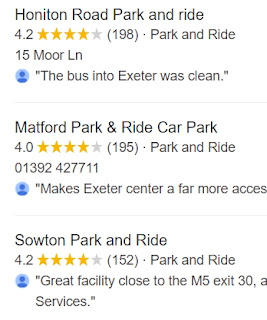 ... isn't an Exeter Park and Ride; it is a Hospital Park and Ride! It doesn't appear with the three Exeter Routes.
The shuttle, operated by Dartline, has been launched because the Trust’s existing Digby Park and Ride is changing on 1 June. Members of the public will still be able to pay to use the Digby bus if travelling by foot, but from 1 June only RD&E staff with valid parking permits will be able to park their cars at the Digby site. Members of the public travelling by car are advised to park at Sowton and use the new shuttle. RD&E staff members currently without Digby parking permits can also park at Sowton and take one of the regular Stagecoach buses to the Waitrose site next to Heavitree Hospital for a 33% discounted fare.

So the Hospital Park and Ride car park at Digby (not the same Digby as Stagecoach's terminus for the H1 and H2) is not available to the public who must use the Sowton Park & Ride which is one of the three Exeter sites.
If the Hospital really wants to be helpful then the screen should look something like this :- 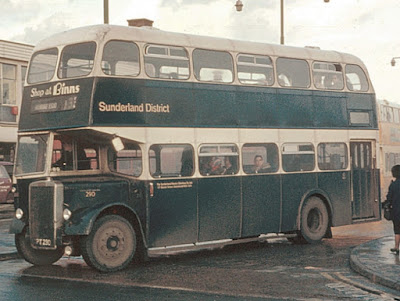 Although part of the BET "Northern" bus company, Sunderland District buses were painted a rich and distiguished dark blue. Even after the arrival of the over-arching centralisation of the National Bus Company, Sunderland's longer distance service retained the blue with National Express style lettering. 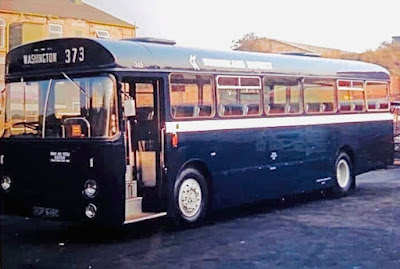 It was a darker blue than the short-lived National Bus Company blue as worn for a while by Midland General.

Sadly, Sunderland District soon becaame red and Northern.
But today's Go Ahead North East (successor to Northern) has announced the resurrection of the name, but not the blue, for its Sunderland area services. The name Sunderl And District (or maybe Sunderland District?) is the brand.
Or is it?
This bus parades the purple version of ther name but seems to highlight a fruity flavour. 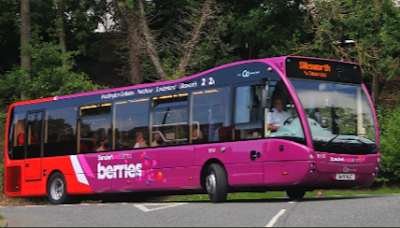 Fruit did not last with First Potteries (remember "Cherry Line") ... 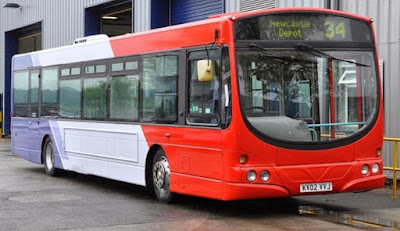 ... so fbb awaits with expectation what other fruit will appear in Sunderland. 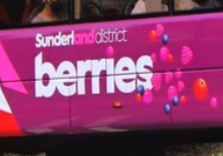 But please do not confuse the former Sunderland District with Sunderland Corporation buses.
They were green! 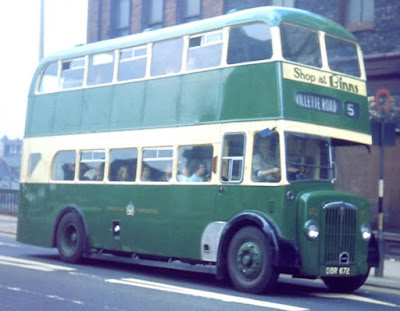 But you were still exhorted to Shop at Binns!
Cotswold Contravision? 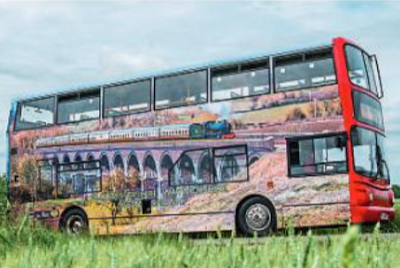 The bus is from Marchants and is spotified on both sides ... 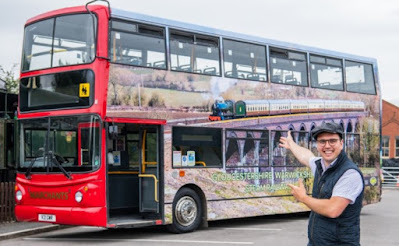 ... oddly with a mirror image of Jack Bosker's picture. As a further promotional quirk, the bus has been re-egistered V21 GWR. 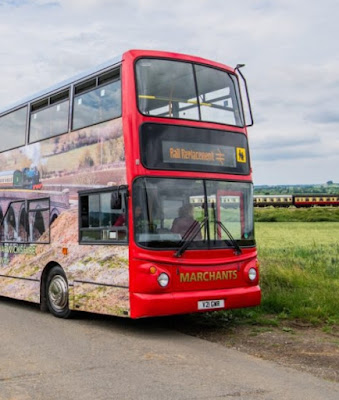 The train is on Stanway Viaduct. 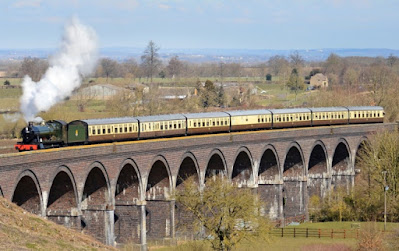 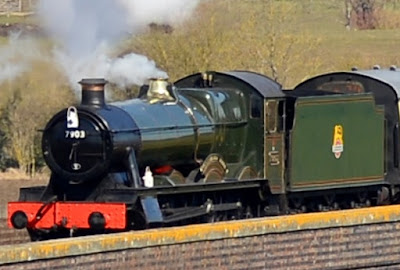 Sorry, Marchant's passengers, that you will suffer spots before the eyes in the interests of Heritrtage Railway PR!
Bodging Continues! 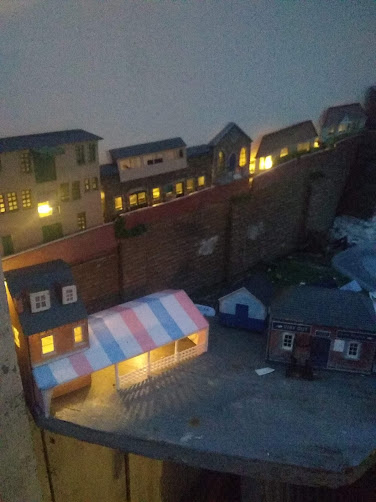 The problem with fitting lights to the low relief buildings above Peterville Station is that you need it to be, if not dark, certainly a bit dusky. So you can see the problem above. One light is right behind an opening and takes over the camera, out lighting all the other lights.
fbb is certainly baffled, but does need a baffle!
Likewise that bay window in the bungakow is over lit. 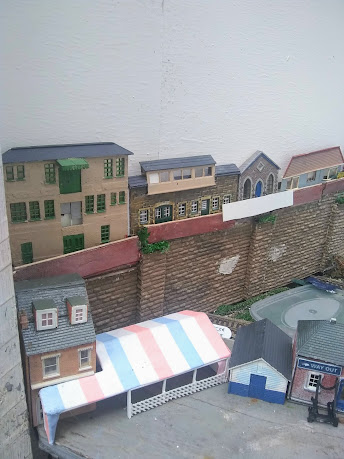 Thrre is a baffle behind the centre cargo-hoist doors, a filled in window where a huge overscale screw intruded rather noticeably. Although not visible in this shot, an attempt has been made to baffle the bungalow.
The strip of white plastic is a replacement for a chunk of brick wall originally made of plywood but which was too thick to accomodate the cut down chapel. The strip is not straight, but its wiggles will not be too noticeable.
But how do the lights look? 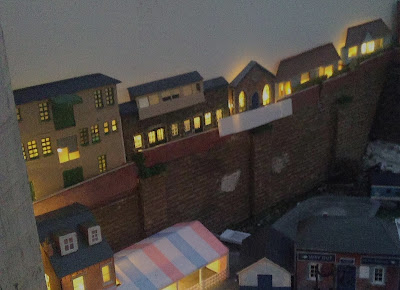 Definitely getting better as photographed at 2150 last evening with the camera over-reacting to the lights. But a bit more bodging is needed. Light spilling from behind the buildings needs to be eliminated.
More Variety tomorrow : Sunday 18th July
Posted by fatbusbloke at 02:00