Having perused an article in the August edition of Modern Railways outlining the proposals for LNER services on the East Coast main line from May 2022, fbb thought it would be "interesting" to see how the company explained itself and its proposals. The above video was pretty, but not particularly helpful.
As usual with a rail operator web site, there is page after page of unwanted clutter. 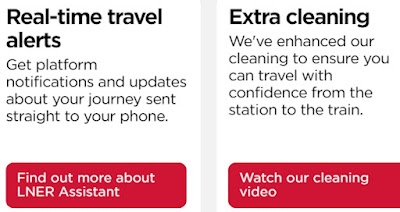 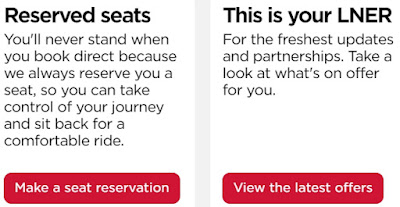 ... which seemed rather fatuous as, by dint of looking at those pages, fbb has already decided to "try L N E R". Then comes the exhortation to avail oneself of cheap fares in September. 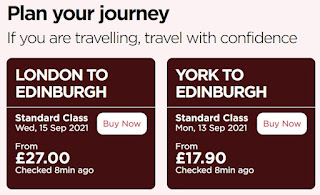 Presumably there are lots of potential customers who trawl web sites and plan their journeys to fit the cheap fares. Most customers already have dates in mind before they get ouit the electronic trawl net!
If fbb is resolute (and he neeeds to be) there are some lists of stuff lurking at the bottom of the home page ... 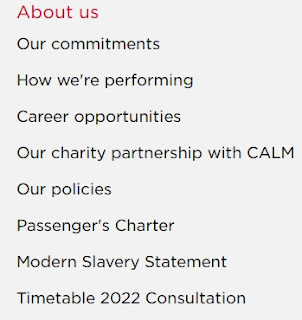 ... one of which is about the May 2022 changes. Bearing in mind the toroise-like (a toroise in a paper bag, utterly disorientated!) progress of establishing a train timetable, you do wonder what possible outcomes there might be from the consultation! It all starts in approx 10 months!
But L N E R are desperate for fbb's opinion, apparently ...

... so desperate that they ask TWICE! This follows immediately below the graphic above.
Have your say
From May 2022, we are looking to make significant improvements to our timetable which will allow us to run up to 39 more train services a day meaning up to 17,000 extra seats across the LNER route.
As a result of over a decade of planning and investment, including our new Azuma trains and Network Rail’s East Coast Upgrade improvements, we are also able to deliver faster journeys.
Your opinion matters to us and we know the proposed changes may impact you. We are running a consultation which is now open until Thursday 5 August.
Then you have the happy little vidoe which headed this blog. Then L N E R ask you for a THIRD time.
We want to understand your views on our proposed timetable. We are consulting from 11 June to 5 August 2021.
You can read a summary of the changes for each station and give your views online through our consultation survey. You can also read the full consultation document  as well as the proposed new timetable.
fbb glimpsed in a sort of terrified way the "full consultation document" but felt that its 140 pages were overkill. One good bit in the "full" is the simple diagrams of the present, proposed and later further improved pattern of service.
So here is present pattern (left) alongside "proposed" pattern for May 2022. 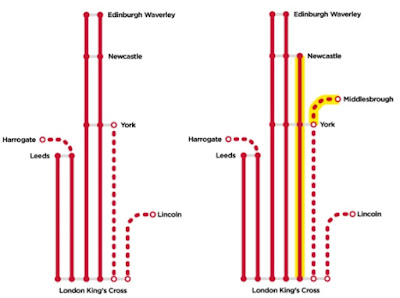 Solid lines are hourly, dotty lines are two hourly.
The new bits are highlighted in yellow. So new is a third train every hour between London and Newcastle. Also the present York train (every two hours) will be extended to Middlesbrough. 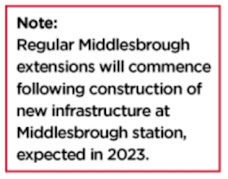 Except that it won't happen until Middlesbrough station gets a bit more platfrom!
So it seems a whole lot of fuss for one extra train. L N E R has "access rights" for six and a half trains every hour (that is six hourly and one two hourly). So the extra two hourly departure is not being taken up - yet.
Now we compare may 2022 with "sometime in the mid 2020s". 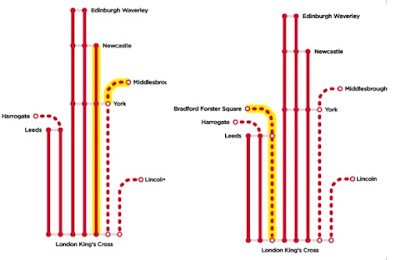 We see that unused two hourly path provides an extra train to Leeds and continuing to Bradford.
In summary, and when the whole shebang is in place "later", we will have gained a third train every hour from London to Newcastle, a two hourly extension from York to Middlesbrough and a two hourly extra train to Leeds ongoing to Bradford.
Impressive!
So, again, the question. Extra trains, so why the consultation?
The devil, they say, is in the detail. We are told that many services will be speeded up. Some of us remember an aspiration for a four hour journey time London to Edinburgh and, indeed the "Flying Scotsman" was accelerated a while back to give that headline running time.
Let's look at a chunk of actual timetable.

The fast hourly train to Edinburgh leaves at xx30 and takes 8 or 9 minutes over the four hours. It stops at York and Newcastle. The other hourly train at xx03 has additional stops at Peterboprough, Newark, Doncaster, Darlington and Berwick; but it arrives in the Scottish capital barely ten minutes before the following fast. If the fast omitted, say York, it would be arriving at the same time!
The new xx33 to Newcastle has yet a further different pattern of stops which means, for example, that passengers from Stevenage would have a 30 minute wait to continue their journey to Edinburgh.
This is L N E R's big gamble. Some passengers from intermediate stops will lose their through service to the far north. There will be grumbles. Hence the "consultation"?
The xx10 and xx40 also have different stopping patterns south of Doncaster with the same possible grumbles if, say, local links are no longer possible using L N E R.
Some journey opportunities are maintained by Grand Central and Hull Trains.
Note that one Leeds each hour train extends to Harrogate.

The xx47 runs either to Lincoln or as an "extra" to Yotk, later to trundle on to Middlesbrough.
The current L N E R occasional services (occasional but important) still run to Aberdeen, Inverness, Glasgow, Hull and Bradford/Skipton.

But, remember that bit of clutter about reservations? 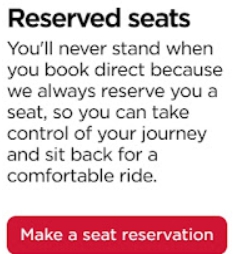 Don't you believe it!
Here is Roger French's recent experience.
Then I had to endure the complete farce that is LNER’s current service offering and its ludicrous policy of compulsory seat reservations. I booked my ticket on the 08:33 from Kings Cross to Leeds last Tuesday being allocated a seat in coach B. The next day, Wednesday, I received an email to advise the train formation would now be different so “seat reservations will not apply”. The same thing happened to me on the same journey a few weeks ago too. 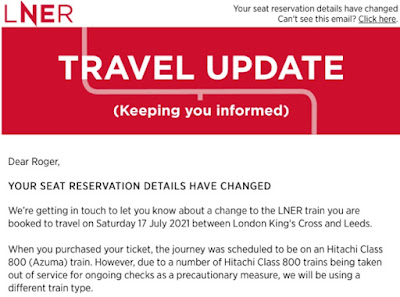 It shouldn’t come as a surprise as that journey is now allocated to a diagram worked by a Class 91 and Mark 4 set of coaches rather than an Azuma. I read about this regular occurrence in a rail magazine a while ago so it should be well known to LNER’s computer and makes you wonder why the company is causing unnecessary confusion and distress to its customers? 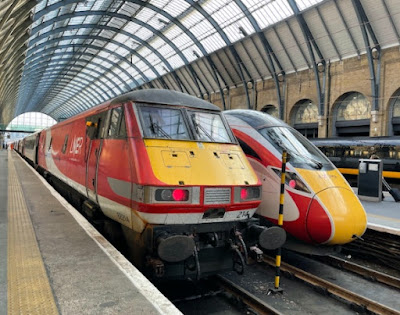 All the more so on Saturday because as passengers were boarding at Kings Cross there was a look of bewilderment on the faces of everyone walking up to the front end of the train with their seat reservations in hand in search of a missing coach A who’d obviously not seen and read Wednesday’s update. They ended up wandering into coach B wondering what to do.
Meanwhile Train Manager Charlotte was introducing herself over the PA telling us about all the usual introductory stuff including what tickets you couldn’t use on the train (“those marked Thameslink, Great Northern, Grand Central and Hull Trains” – such a welcoming way to greet us all) and explaining there was “no coach K due to a mechanical issue so could passengers use coach L or coach M instead” ...
... but no mention of the missing coach A and she insisted in a forceful tone “you must sit in your designated reserved seat”.
Yes, you've got it. "You must sit in your reseved seat - only it doesn't exist!"
Appalling customer service.
Is It REALLY A Month?
One of the many joys of old age is the realisation that months are a lot shorter than they used to be! It only seems just over a week that fbb was grappling with the monthly mailing to "congregations" of the two get-togethers that the fbb's ran untillock down.
Next week's mailing is in preparation for a grand re-opening from September and starts a new series on the "pre-history" narratives from the book of Genesis. It's been a bit of a struggle to squeeze thoughts about the Creation account in Genesis Chapter 1, plus a few quizzy bits and some appropriate illustrations into four sides of A5.
One asks for the names of geometric solids ... 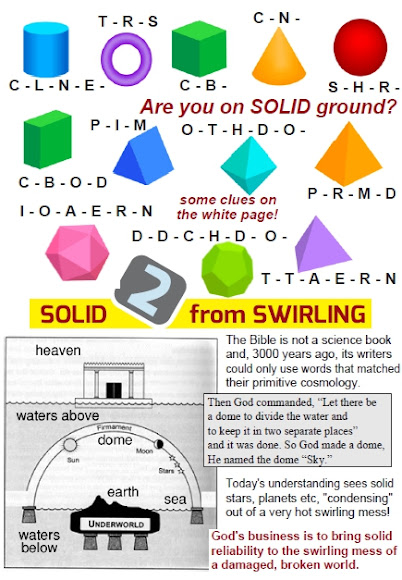 ... whilst helping readers understand the "solidifying' as seen through the eyes of Mesopotamian cosmology.
And another page links some questions involving "time" to the Creation Day 4 appearence of sun moon and stars. 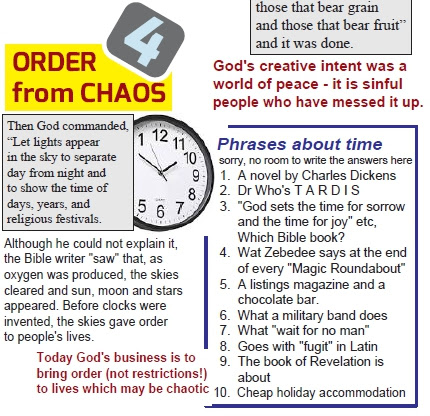 Doubtless the recipients (mostly NOT church goers) will enjoy the mix as usual. For the more theologically minded - and the perpetually cynical - it is fascinating to see how modern cosmology has moved closer to Genesis rather than further away.
Bearing in mind the bible was never intended to be a science book, it is amazing to see many similarities between words writted down 3000 year ago and the ourpourings of the Brian Coxes of today!
Tomorrow; amongst other things, the tortured tale of fbb's mobile phone.
Next "Isn't Technology Wonderful?" blog : Friday 23rd July
Posted by fatbusbloke at 02:00