Wading Through The Black Lake (1) 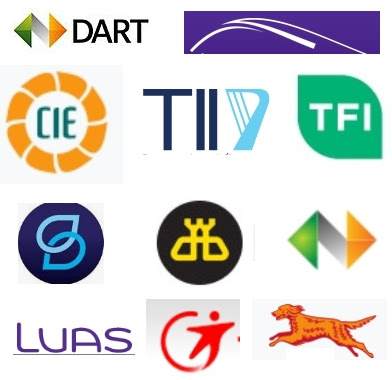 People often suggest that having some form of state control would ensure that public transport was properly coordinated and utilities such as timetables, maps and web sites would be clearer and easier to use.
Apart from a few airport bus services, almost all public transport in the Republic of Ireland (RoI) is state owned or state controlled. But it is not quite as simple as it seems!
Eleven brands, eleven logos, eleven structures are all involved in supplying buses, trains and trams to the good folk of the land of leprechauns! 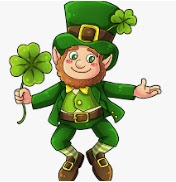 Sadly the Leprechaun Line coach company operates from a base in ...

New York State, USA.
We start with the easy bits.

Iarnród Éireann, also known as Irish Rail in English, is the operator of the national railway network of RoI. 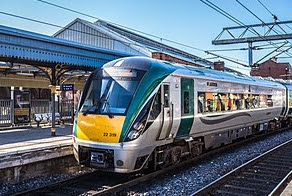 The Dublin Area Rapid Transit system (stylised as DART) is an electrified commuter rail railway network serving the coastline and city centre of Dublin. The service makes up the core of Dublin's suburban railway network, stretching from Greystones, County Wicklow, in the south to Howth and Malahide in north County Dublin. 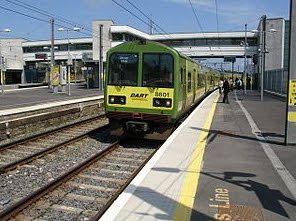 Oddly, it only uses the English name, probably because the Irish Gaelic version doesn't make a nice snappy acronym!
And so to the dog.

Bus Éireann, (Irish Bus) is a bus and coach operator providing services throughout the Republic of Ireland with the exception of Dublin Region bus services. 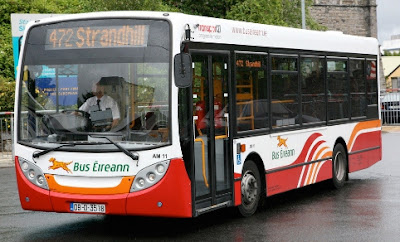 Which naturally leads us to :-- 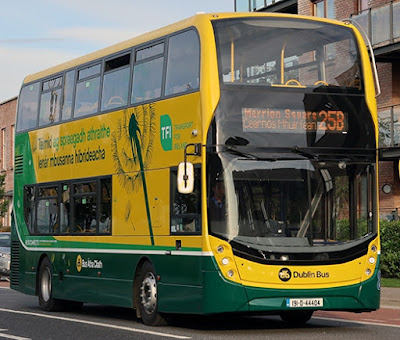 Buses have appeared in a green version of the standard livery to celebrate the "greenness" of the hybrid bus. Note the TFI loco plus text, one of a series of TFI brands allocated in recent times.

The passengers don't care, of course, as long as their expected bus turns up!
But even Dublin Bus is not quite so simple.

Between September 2018 and March 2019, 24 Dublin Bus routes and 125 buses were progressively taken over by Go-Ahead Ireland after their operation was put out to tender. 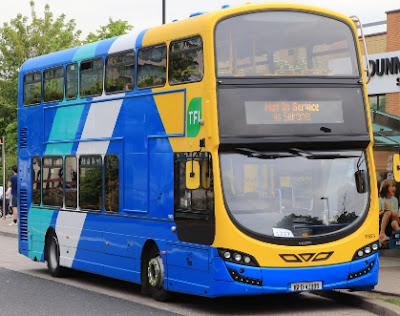 GoAhead buses are big-branded for Transport For Ireland aka The National Transport Authority (NTA) ... 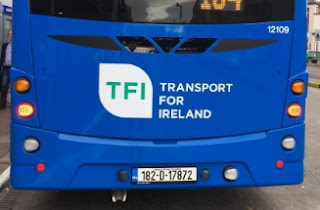 ... with secondary branding for the operator. 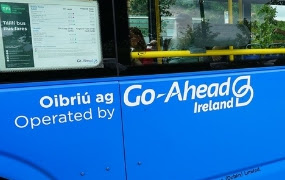 Thus we see that the tendering process was implemented by:-

Údarás Náisiúnta Iompair (The National Transport Authority - NTA) is the transport authority for Greater Dublin and the public transport licensing agency for Ireland. It was established under the provisions of the Dublin Transport Authority Act (2008) and the Public Transport Regulation Act (2009), on 1 December 2009.
The NTA took over certain functions from the Department of Transport and the entire role of the Dublin Transportation Office. It has also taken over the functions of the Commission for Taxi Regulation.
This structure looks a bit like a mixture of a Greater Dublin PTE and The Traffic Commissioners but it is presented to the public as ...

Transport for Ireland.
The scheme was announced to "improve efficiency" or, in other more meaningful words, to save money. We must assume that GoAhead runs a more efficient operation than Dublin Bus OR, maybe, GoAhead has tendered low to get the work and continue with some mega-plan for world domination which does not require every subsidiary company to rake in hyper-profits.
The philosophy of the big bus groups is shrouded in mystery and overseen by the grey suits of the major Stock Market investors. Serving the Public - don't make us laugh!
But there's more!

Transport Infrastructure Ireland (Irish: Bonneagar Iompair Éireann) is a state agency in Ireland dealing with road and public transport infrastructure. The body was established in 2015 by merging the former National Roads Authority and Railway Procurement Agency.
So a mix of the equivalents of the UK's Network Rail and the Highways Agency. Perversely, TII is respinsible for The Dublin tram network.

It would be usual for LUAS to be an acronym, but, in fact, it is Irish Gaelic for "Speed" 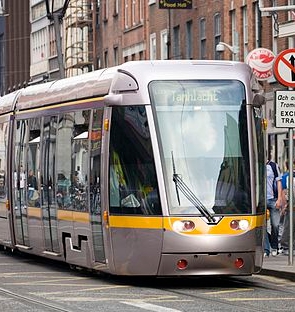 Luas is operated by Trabsdev! 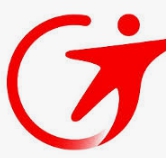 Although Transdev behaves as if it were a real company, it is 50% owned by ... 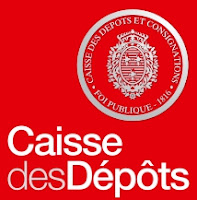 ... which dates back to 1816 and, surprise, surprise, it part of the French Government.
To deliver the desired benefits of state ownership and control (?), all operating companies run their own web sites with their own timetables, so GoAhead Ireland's services do not appear on the Dublin Bus site, Luas is missing from Dublin's bus site and is not present on the national or local rail information sources.

fbb hopes his readers have absorbed all this and so they will be ready for the main purpose of this series of blogs. 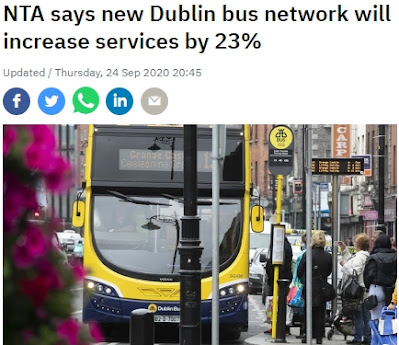 The National Transport Authority (NTA) said the new bus network for Dublin will increase bus services by 23%.
The new bus network has been unveiled based on eight new super frequency spines and 12 orbital route, which will be introduced on a phased basis starting the new year subject to government funding.
The final design follows three rounds of public consultation involving a total of 72,000 submissions.
It is based on the cross city spines lettered A to H arriving every five to 15 minutes connecting with 12 orbital routes and a large number of local routes.
The political organisation (pseudo PTE for Greater Dublin) has come up with a cunning plan involving frequent "spokes" connecting with more local services at suburban "hubs" offering a substantial "improvement" in bus services.
Now haven't we heard something like this before?
But before passing judgement, we need to understand the wonderplan in a little more detail and, as we shall see, that is quite difficult.
And, by the way, Dublin in Irish Gaelic means "black lake"!
-------------------------------------------------
What's Going On?
fbb has just put in a low EBay offer for this:- 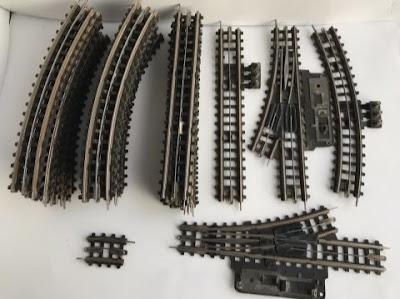 What is it - and what would the old man be wanting it for?
Next Dublin blog : Wednesday 30th September
Posted by fatbusbloke at 02:00