Don't know why this gap is here!!

Church Link
Service starts 1030
Today the church is running a LIVE "Car Park" service.
The fbbs will be attending. It is not possible
to set up an on-screen link before they depart.
A link can be obtained, however,
via the Church YouTube channel
(here) and click on the panel for today's date.
-o-o-o-o-o-o-o-o-o-o-o-o-o-o-o-
100% Increase In Visitor Numbers
On Friday Peterville Quarry Railway welcomed two more visitors, Arthur (5) and Isabella (8), grandchildren of Fran, a church chum. It was their first experience of a model railway and they were mot entirely "au fait" with what it was all about. However they accepted willingly the offer of a chance to drive a train. 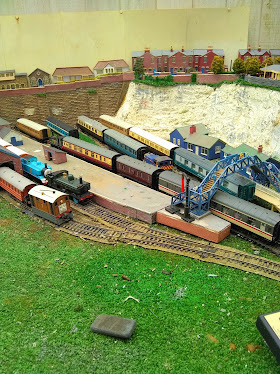 It would be fair to say that Arthur was more interested in crashes and derailments than the subtleties (?) of fbb's modelling skills. The old man held on to the controller very firmly and was ready to click the forward/reverse switch into the centre off position - an emergency stop that was necessary on a couple of occasions. 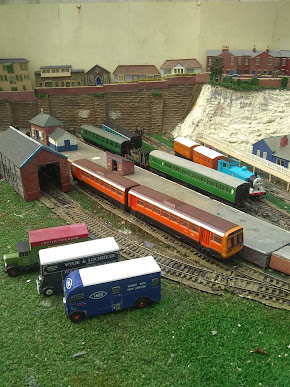 The favourite train was the Greater Manchester liveried Pacer - so somebody likes them.
fbb suspects that it was favourite because it was orange, rather than because of its innovative engineering!
Calder Valley Conclusion
British Railway Class 110 diesel units were built for the Calder Valley lines. 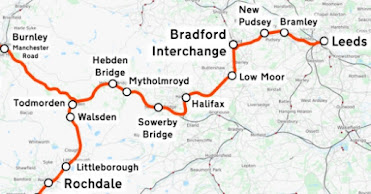 They carried a wide range of liveries, starting with BR green with cream lining and "speed whiskers" ...

... followed by the additon of yellow warning panels. 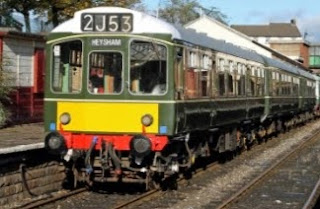 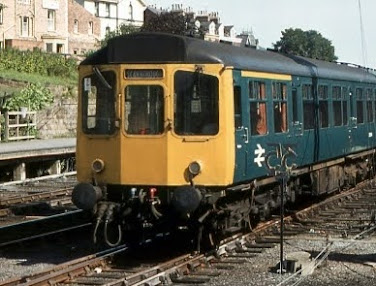 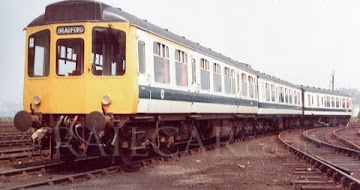 fbb expounded on the problems with his Hornby model of a Calder Valley class 110 3-car DMU in an earlier blog. He bought it cheap, cheap because it was an "erratic runner".

This appeared to be because the little grey gear wheel on the motor was not fixed firmly to its axle ... 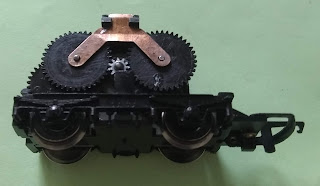 ... which meant that when the going got tough, as in up a slight incline or over rough trackwork, the unit just sat there whirring away happily but remaining annoyingly motionless. fbb solved the problem by applying superglue - alas too much such that the whole motor seized solid!
So depressed was the old man that he put the unit back in its box and expected to be brave enough later to throw it away. 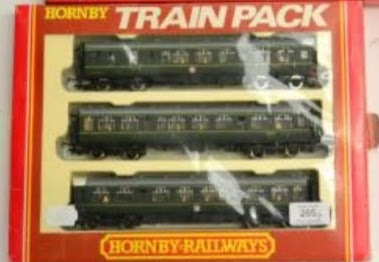 But on Friday morning the old man had another go. First, and in a go-for-broke act of electrical lunacy, he soaked the whole bogie, including its motor, in a mixture of hot water and Mrs fbb's Fairy washing-up liquid. He dismantled the gearing, always a risky business because of the near-certain possibility of not being able to re-mantle it! Thus cleansed and beautiful (the motor, not its owner!) fbb could see what was wrong.
What had actually happened was that the superglue had dribbled into the cogs of the little drive gear wheel, mixed with the oil and crud therein and created a wodge of something like reinforced concrete, but in very small bits.
The actual motor was OK but the complicated coggage would not turn.
Using assorted pointed things, your author was able to pick out lots of minute plidgets of very hard black stuff that had prevented the cogs from cogging. 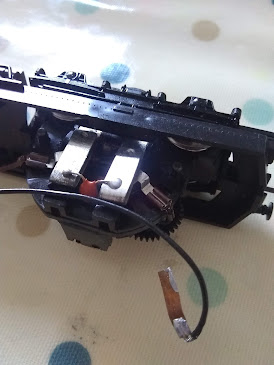 All that was needed was to apply a teensy weesy amount of superglue, re-assemble (successful), lubricate, reconnect the power wires and snap the body back on and - whoopee doo dah - a working three car unit. The hardest part was getting the copper "spade" connector into its socket (see above). It needed Mrs fbb's bodkin, a sharp blade to prize the socket open, and brute force to get the slice of copper to slide in.
The model had cost £40 in its unreliable state and today's "pre-owned" prices seem to be between £80 and £110 on a certain auction site. 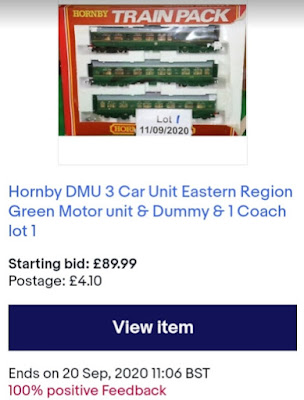 Or, of course, fbb could have bought a similar new three car class 108 unit from Bachmann for about £170 - or, even better, with DCC technology and a sound chip for about £310.

Here is fbb's chesp-o beauty, running in 2-car mode for running in. 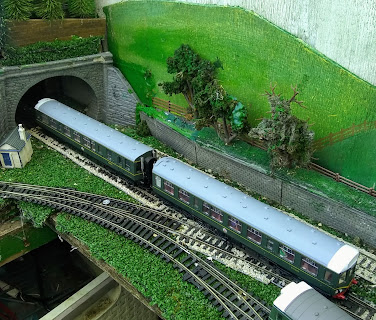 Snakes, The Snake, Devonshire & Bolton Abbey
Readers will remember the discussion in and around this blog about the origin of the now-closed Snake Inn's name. A comment writer suggested a link to the coat of Arms of the Dukedom of Devonshire. It so happens that chum Peter was reading the blog as he chillaxed in an hotel at Bolton Abbey, North Yorkshire. 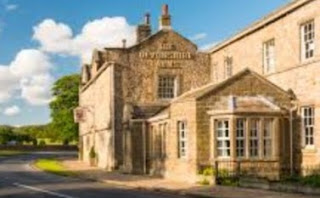 Said hotel is called "The Devonshire Arms" (a bit posh for the fbbs?) ... 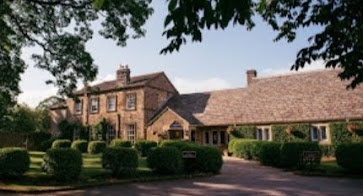 ... and its letter heading includes the Arms of the Devonshires ... 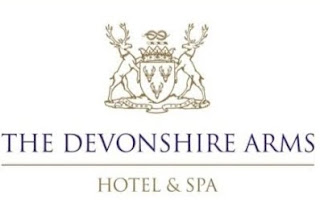 ... but even more significantly, the carpet in the lounge includes just the snake in its design. 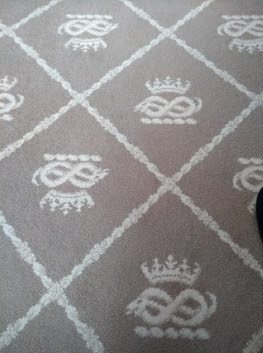 Were you thinking of using public transport to get to Bolton Abbey, perhaps to visit the Steam Railway ... 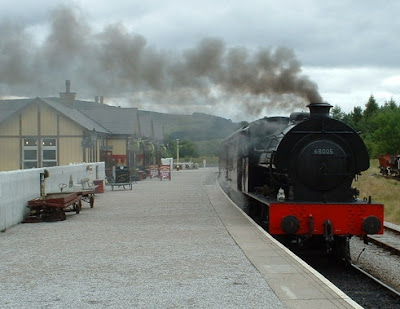 ... you would not find Traveline very helpful! 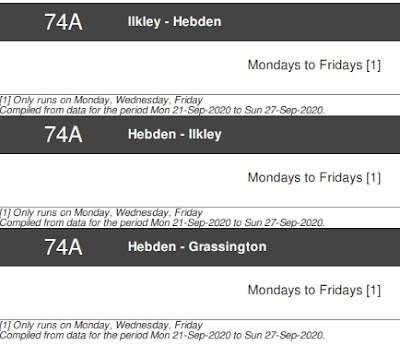 The all stops version looks a little better! 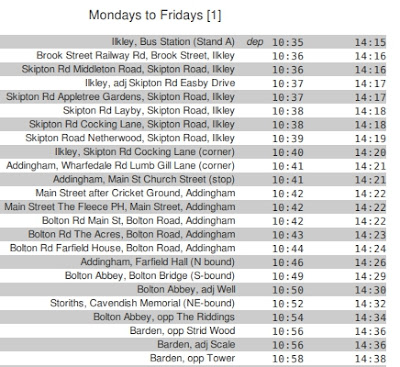 Note [1] means Mondays, Wednesday and Fridays only. The operator is North Yorkshire Council which probably explains the timetabular malfunction. fbb did some very frustrating work for NYCC back in the ice age and suspects that not much has changed since. At least the County's timetable collection agrees with ONE version of Traveline's. 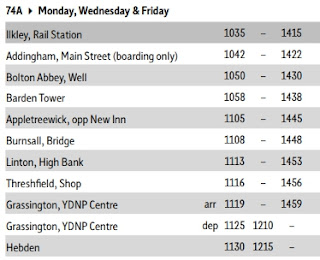 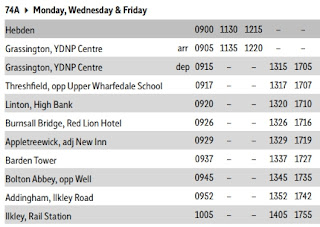 Maybe a couple of nights in the Devonshire Arms could help? Have fun working it out!
One special delight would be a ride on the recently restored and rebuilt 1903 petrol-electric railcar. 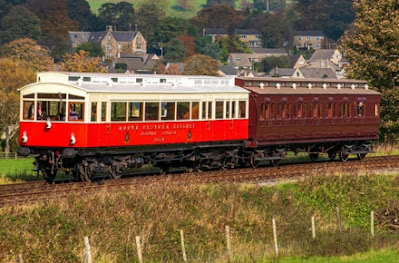 Although the website stresses that you should book for this particular train and that you need to check on which dates it is running, no amount of prodding and clicking reveals the answers. But, all together now ...
It's All On Line! 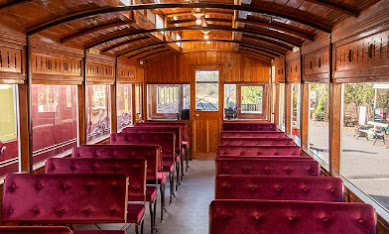 Looks lovely!
Shoebox Simplicity
For many years various Christian charities have encourage supporters to assemble shoeboxes full of goodies for severely disadvantaged children in e.g. South America. Donors have sometimes found it hard to work out what to put therein.
So Samaritan's Purse (here) have come up with a simpler way. 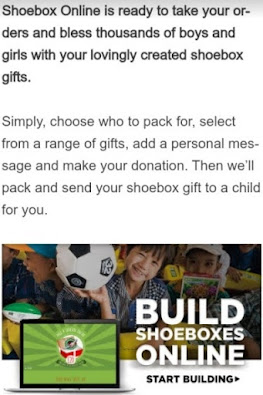 The recipients' stories are truly heart-warming. 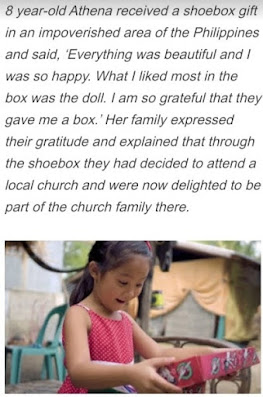 Blogger, part of the Google world domination policy, has changed the design of the Blogger interface. Now it is more complicated, slower to use and less reliable. But it is now "pretty" and full of new twiddly things which are hardly necessary for a transient blog! It took fbb  twice as long as usual to put this blog together. It also does funny things with paragraphs and page layout. AND it doesn't format properly on a phone.

Apologies for any unsatisfactory results and technological blips.

It also has lots of really trendy (and pretty useless) fonts.

If fbb can use them correctly? (This one is called "Lobster").

And if they work on other folks' confusers.

This one is called "Permanent Marker". Why?