Manchester (a k a Cottonopolis) suffered the dreaded PTE-ification in 1969 under the acronym "SELNEC".

It absorbed a whole clutch of municipal bus operators and later the rump of North Western Road Car was added as SELNEC Cheshire.


One of the omnibological delights of greater Manchester pre-PTE was the proliferation of joint services.

Although Glossop is in Derbyshire ... 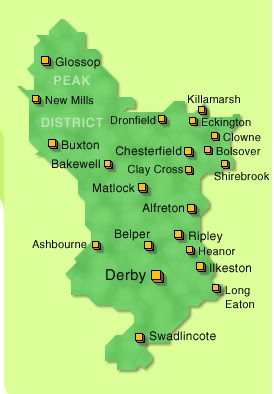 ... its commercial and commuting affinity has always been with Manchester. In another anomaly, and despite Derbyshire's simplified map above, Glosop is NOT in the peak district as shown by its yellow boundary. 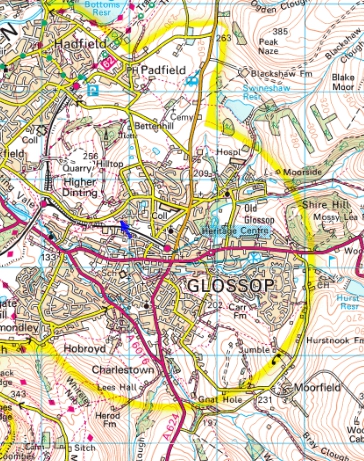 So it was that in pre-SELNEC days four operators provided bus services between Manchester and Glossop, each having a share, for example, of "Limited Stop" route 6. 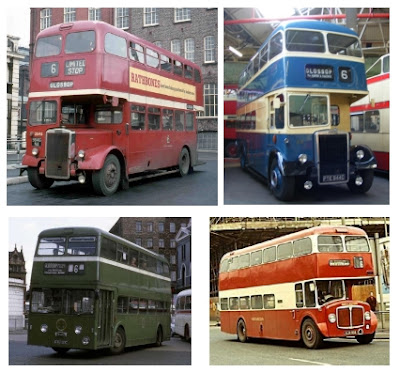 The terminus was pictured as The Norfolk Arms ... 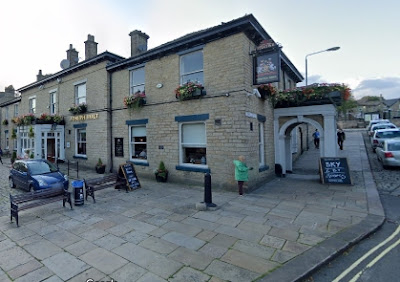 ... still trading  today and just round the corner from the present stops outside the station. 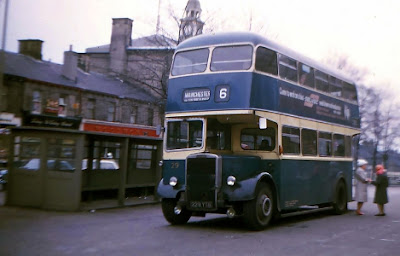 The view above is looking towards Manchester; with the clock tower of the Market Hall peeping up above Ashton's finest ... 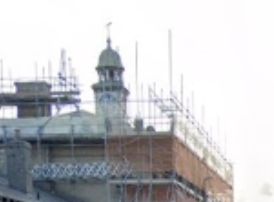 ... and going through a major refurbishment when Google Streetview gurgled by. Where the bus is grazing is now car parking with trees obscuring the clock. 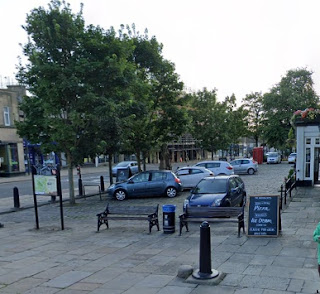 fbb's detailed knowledge of bus routes in Manchester is parlously lacking, but he does remember (or thinks he remembers!) at least four bus services running from Glossop into Manchester. 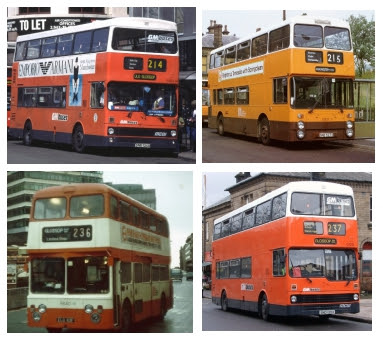 236 and 237 were, at one time, Limited Stop and thus successor to the original route 6. In the days of the Great Britain Bus Timetables these two provided a joint half hourly service into the city. 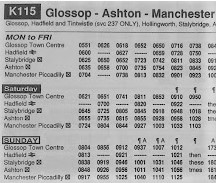 But alas no longer. One of many Stagecoach (successor to SELNEC South!) reorganisations had terminated the 236/7, the last remaining bus service into Manchester itself,  at Ashton ...

... but earlier this year the 236 was withdrawn, much to the opprobrium of Glossop personages, leaving an improved but slower 237. 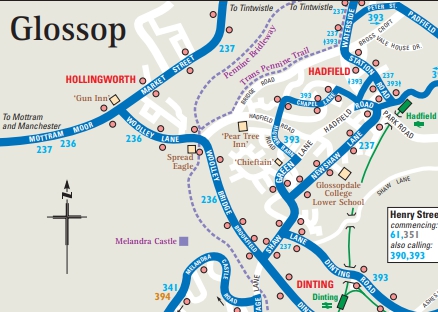 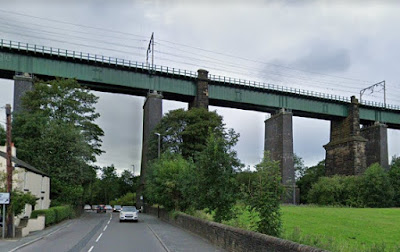 So Glossop has no bus service into Manchester, a gap that will be partially filled by Hulleys "courageous" new service.

Whilst the X57 to Sheffield is two hourly, it is joined at Glossop by the X56 running Glossop to Manchester only. Note "S" does not mean Saturdays only (as most timetabular savvy folk would think), it means the bus runs from/to Shirebrook Park ... 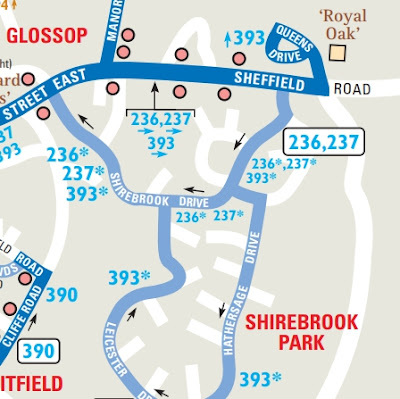 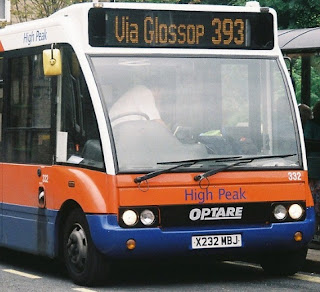 ... every hour; thus giving the good folk of the estate three buses every two hours when the X56 materialises at the end of October. This may well affect the viability of that twiddle of the 393. 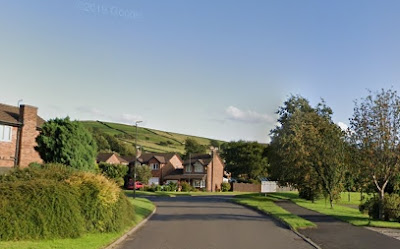 ... but hardly "good bus territory" and unlikely to generate huge passenger numbers for a fast zip into Manchester.

Of course, the main contender for Glossop to Manchester business has to be the half hourly train service. 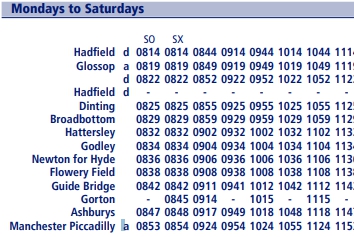 At 32 minutes running time it offers a saving of 8 minutes over Hulley's aspirational 40 minutes, which fbb's lorry driving chum David thinks is over optimistic!

But of course, Hulley's is FREE for us old crocks - which might be an attraction - certainly more "senior friendly" than changing off the much slower 237 on to one of them new-fangled trams at Ashton.

But bus watchers doubt that there will be enough business at Glossop and Hollingworth (the only stop en route) ... 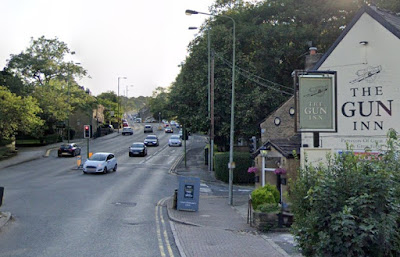 ... to turn the 24 miles of Peak District emptiness between Sheffield and Glossop into a commercially viable service.

But the X57 has one further and intriguing trip up its courageous sleeve. 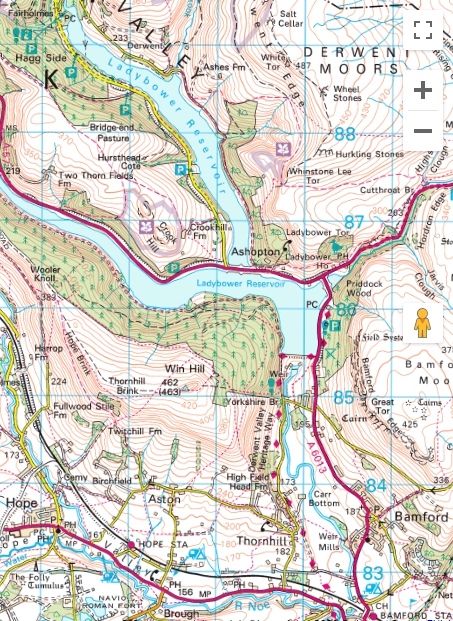 On Sundays it double-runs via Bamford Station (bottom right) then Derwent Fairholmes Plantation (top left) adding ten minutes to the through running time.

This will give a poke in the nose to T M Travel's equivalent Sundays only tendered 273 ... 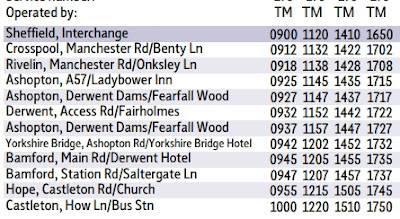 ... unless there is some clever deal to give Hulley's a bag of tender pennies (much nicer than the hard metal ones?) instead of TM Travel?

On Mondays to Saturdays, Hulleys current route via the A57 and Bamford ...

... is renumbered 257 to "match" the X57 and thus gives an hourly combined service as far as the Ladybower Inn ... 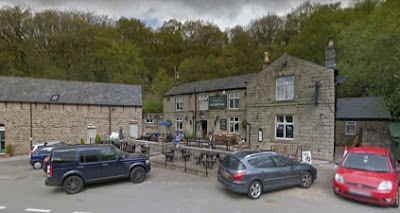 ... before turning off the A57 to whizz southbound to Bamford etc. 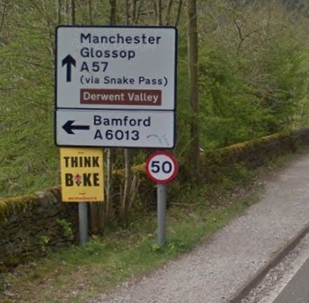 This group of services is truly innovative.

This group of services is extremely courageous.

This group of services really needs a visit from fbb.

But Roger French may well get there first!

Tomorrow we had better take a look at fares; and examine the Glossop to Manchester train service in a little more detail.