Despite these "unprecedented times" positive things are happening on our National Rail network AND positive thinking is being thunked by various groups of influence.

Scotrail's Spreading Schemes
As usual the folks north of the border are well ahead of the game. Their main line aim is shown on this map. 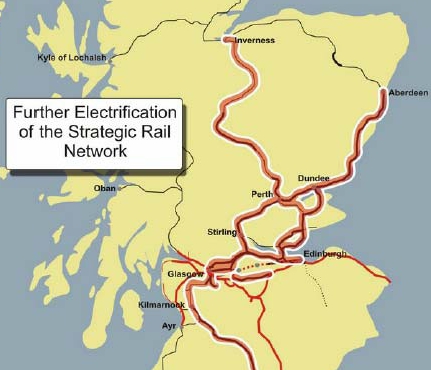 Electric string to Inverness and Aberdeen, and via Dumfries to Carlisle. Add to this a wires up plan for the remaining Glasgow suburban limes to East Kilbride and Maryhill and you will only be left with a few diesel hauled bits "ripe for the new technologies".

There is even talk of electrifying the Borders line from Edinburgh to Tweedbank and extending the wires from Ayr to Girvan.

Neither fbb, nor (more to the point, as a wee lassie from Glagow) Mrs fbb are great fans of Scotland's current political regime ... 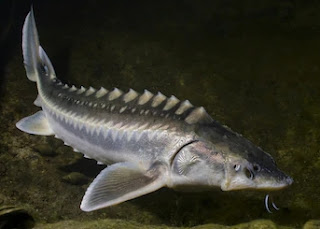 ... but somebody somewhere knows what's best for the northern nation's railways.

Scotland has led the field in electrification for some years and put England and Wales to shame. Surely Kettering to Sheffield should be a top priority plus Plymouth/Exeter to Doncaster. Unfortunately we have got all these shiny new bi-modes to use as an excuse for not spending the money.

But there is a growing feeling that electrification should not be as ludicrously over priced and over engineered as the Great Western! If a political option is to "spend ourselves out of recession", then rail projects should be right at the top of the agenda. 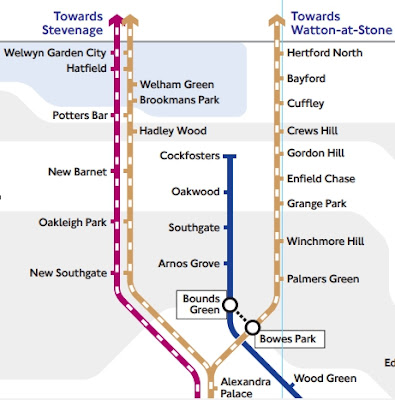 Lines north from Kings Cross include the Piccadilly Line of the Underground (BLUE), services via the "Thameslink" tunnels (PURPLE) and all stops suburban trains to Moorgate (MUD BROWN).

Most folk can cope with trains via Stevenage on the "East Coast" main line, but may be baffled by Watton-at-Stone. 'Tis a village in Hertfordshire with an intriguing name. Watton probably signifies a river ford and Stone comes (again probably) from the little known Roman Road of Stone Street that crosses (crossed) the River Beane in Watton High Street.

A look at the map shows that the railway line continues to Stevenage. 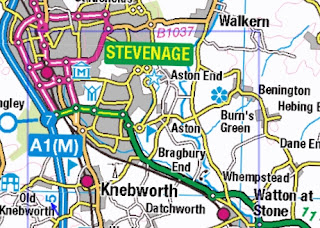 The line approaches Stevenage via a burrowing junction ... 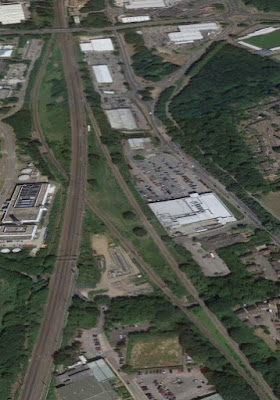 ... but the trains from the "Hertford Loop" (via Watton-at-Stone), running every 20 minutes in happier times, were getting in the way of all the other stuff that was stopping or passing through Stevenage's four platforms. 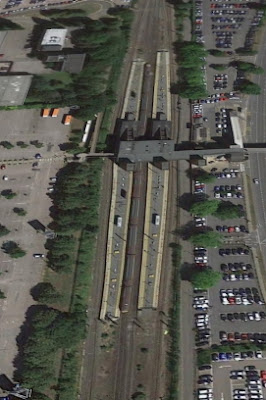 So build a platform 5 on the western edge where that strip of greenery is. While it was a-building, trains terminated at Watton-at-Stone with a bus link. The through service has now been restored. 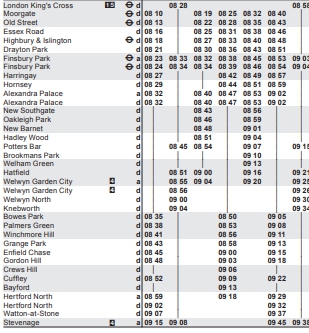 The shiny new Platform 5 is now open, seen here looking back towards the south. 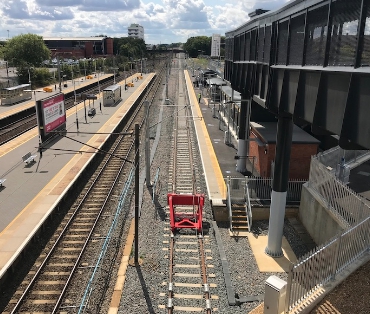 .Not only has it opened but there was a lavish opening ceremony. 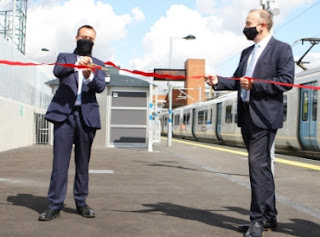 Happy Horden Happening
Again, some readers may not be 100% certain where Horden is. 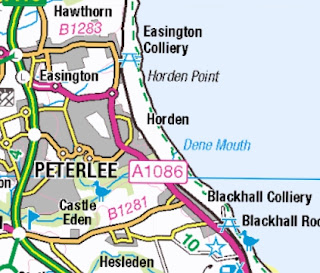 Effectively it is a suburb of Peterlee, a new town not served by train as such, but near the line between Middlesbrough, Sunderland and Newcastle upon Tyne. 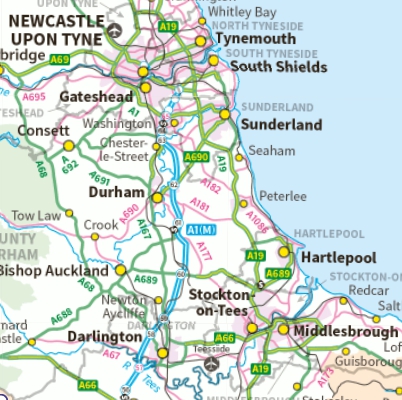 The new Horden has a modest hourly service ... 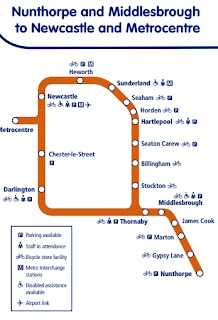 ... running all the way from Middlesbrough's suburbs, through Newcastle to the massive Metrocentre shopping paradise. The leaflet diagram is very, sort of, diagrammatic but the timetable is simple. 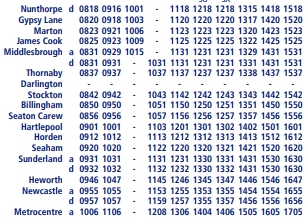 The station is basic ... 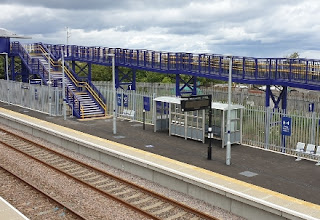 ... yet to reveal itself in all its glory on Google Streetview. 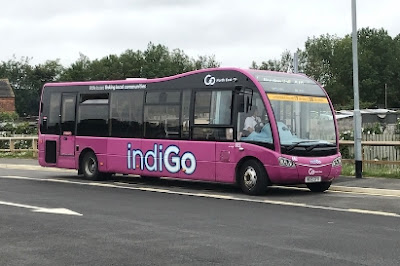 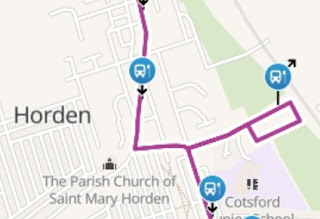 ... and Roger French (who has been there of course) explains.

Soon you are whisked into the delights of central Peterlee ... 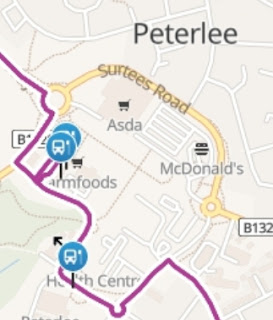 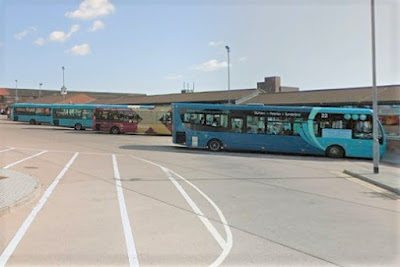 ... before taking in the retail experience at all the same shops you can visit anywhere else in the country. 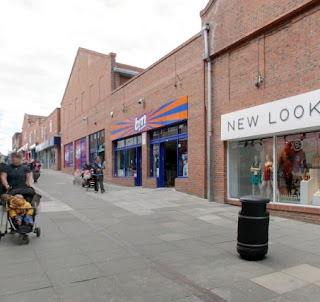 And There's Much More To Come
Florence and Cicelia Revealed in All Their Finery
Tunneling for HS2 starts soon in the Chilterns and the tunneling machines have been introduced to an eager world.
Soon there will be a real hole here as HS2 begins its northbound burrow, first under the M25, and then below the Chiltern hills.


Werrington Dive Under
This project allows trains towards Cambridge to dive under the main line. It should improve capacity by removing delays where trains currently have to cross the main lines "at grade".

fbb thinks that the video will work, and the text can be read if you click the far right hand icon to enlarge to full screen.

It is impressive stuff. 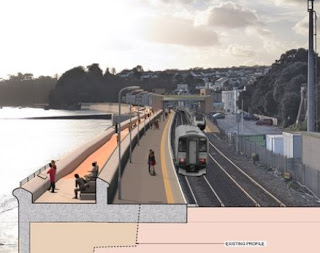 Phase 2 of the sea wall rebuild will also include a new platform on th seaward side of the station. The current platform and fences are made of wood, and can suffer nasties when the wind blows and the waves roll over the present sea wall.

The station also gets a new footbridge with lifts.

None of the above represent new news, but it is encouraging to see that work is being done despite "these unprecedented times"; the railway is being improved; good things are happening.

All we need now is a new and sensible fares structure. Hey Ho, back to "normality".

Next Variety blog : Saturday 5th September
Posted by fatbusbloke at 02:00