Swallow Follow-Up
Where did the swallow fly off to? Great credit goes to today's LNER for this carriage door label on a significant train from Edinburgh on Friday, last. 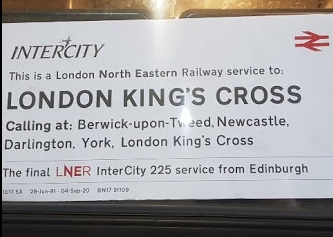 And here (via Twitter) is the actual train travelling north "near York". The setting is at what used to be the fabulous railway-themed Sidings restaurant, all located in railway carriages, including overnight accommodation. 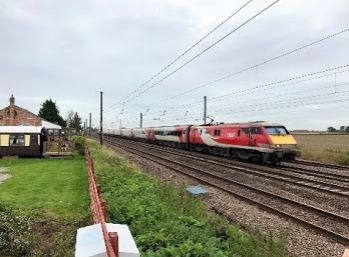 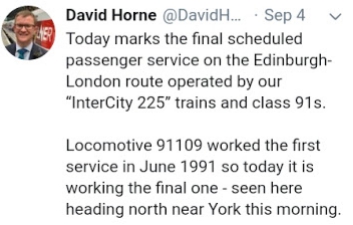 After a brief and downgraded period as an Italian nosh house ... 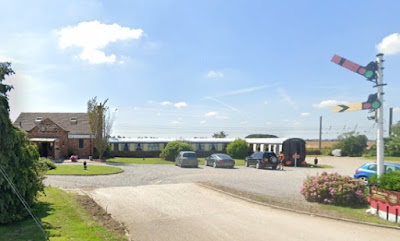 ... The Sidings appears to have regained its ferroequinological glory. 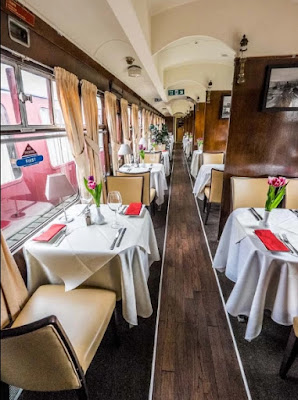 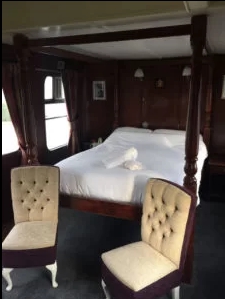 If it were any closer to the East Coast Main Line, it would be on the tracks! 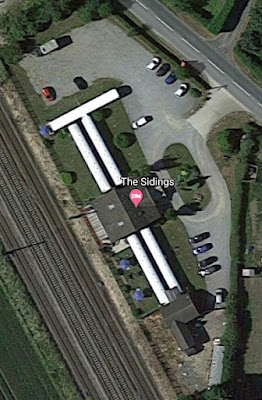 Coach Follow-Up
Yep, the stand-in coaches for GoAhead's X9/X10 from Newcastle to Middlesbrough ... 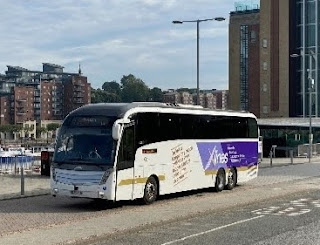 ... are indeed National Express hand-me-downs. fbb cannot quite decipher the registration number on the above, but the vehicle below is from the same batch. 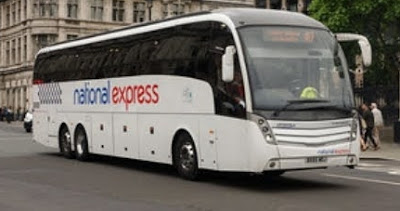 Scooters Used To Be For Kids, But ...
Alan writes:-
Both here in Northampton and in Milton Keynes ... 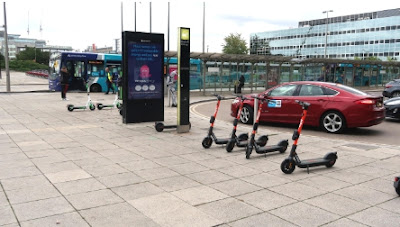 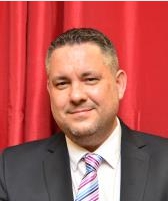 Naturally there is an app, but alas no picture of quotable Councillor Smithers in helmet and hi-vis whizzing down Bridge Street on a scooter. (But see below - fbb!) Note that at Northampton railway station the scooters ... 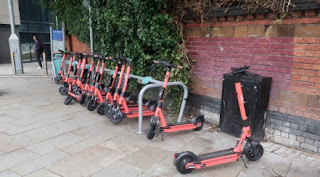 ... are parked in the space formerly occupied by Northampton’s version of the Boris bike. 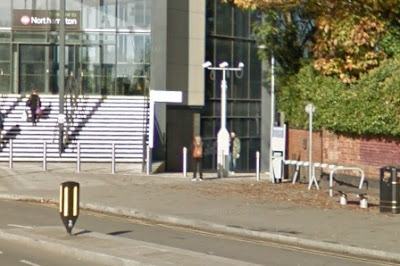 All of these now seem to be missing. 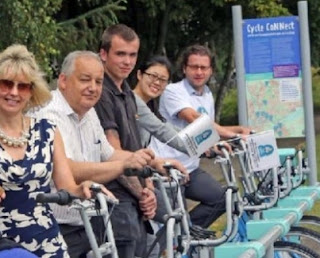 Is there any evidence that the scooters will be more successful than the bikes? 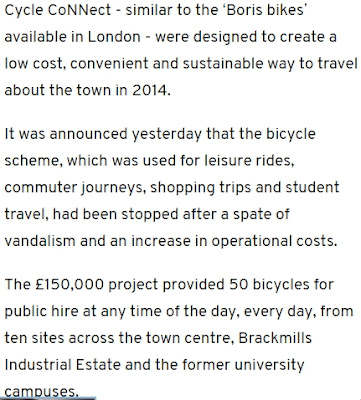 A 12-month electric scooter trial to encourage a new mode of transport that reduces the town’s carbon footprint began in Northampton today (September 3).

Voi, the company that operates the e-scooters, had team members in Market Square along with representatives from Northamptonshire County Council, to launch the new initiative, which members of the public can now take full advantage of.

To start the trial, 300 e-scooters, which are paid for by the minute via an app, have been dotted around the town at places such as the train station, bus station and the university campus, in a bid to encourage taxi or car users to jump on a scooter instead; and, of course to further discourage bus usage.

“You have to have at least a provisional driving licence to ride one, as they are not a toy. They need to be driven on the road so users need to know the rules of the road. Users have to put all their details into the app and then the QR code is scanned on the scooter, which is then ready to go.”

And a correction from Alan. A later picture of Councillor Smithers (right) ready to scoot, but in Fetter Street, not Bridge Street. 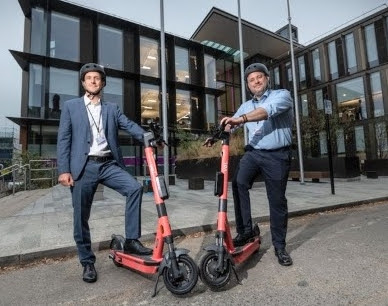 Not a bad guess Alan, Fetter Street is one along from Bridge Street ... 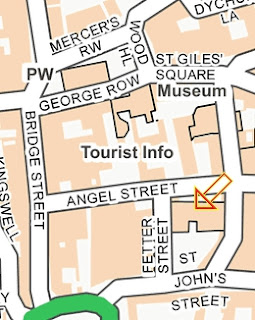 ... and, surprise surprise, just outside the posh new Council offices. So the good Councillor probably did not scoot anywhere!

Learning The Trade
Glad to see that Roger French, a relative newcomer to this blogging lark, is learning the delights of "tease" headlines. 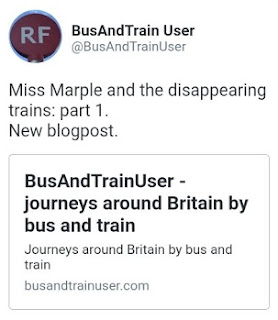 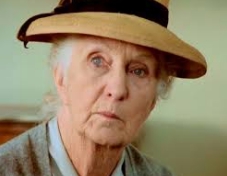 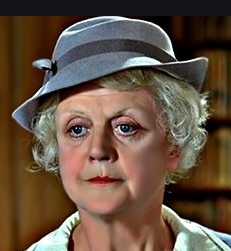 Of course, Roger is a-blogging about the half-witted and unnecessary withdrawal of the hourly trains on the line between Manchester and Rose Hill, Marple. (Rose Hill, surely a suitable name for a suspect in one of Agatha Crusty's stories?). 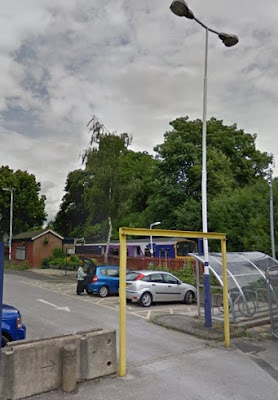 Above: a train at the lavishly appointed Rose Hill station.

The attitude of the nationalised Northern Trains is redolent of that of Marie Antoinette. When told the people "had no bread", i.e. were starving, she is reputed to have replied "let them eat cake."

Faced with the ire of Rose Hill line commuters with no service at their stations, Northern simply suggests, "Let them walk to another station!"

And Last But, By No Means Least ...
A picture popped into the fbb in-box of a really delightful leaflet. 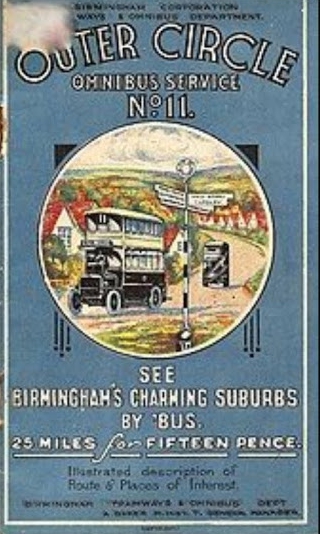 The 11 is still there today and is now one of the few really genuine circular services in the country. Most routes that get the name "circular" are usually lollipop in shape.

A full circuit can take up to three hours to complete, with the service carrying 50,000 passengers each day. There are 266 bus stops on the route. The route serves 233 schools, colleges or universities, 69 leisure and community facilities, 40 pubs, 19 retail centres, six hospitals, and one prison. It also links some 15 commercial centres, and passes Cadbury's in Bournville, one of the world's largest chocolate factories.

The illustration is the cover of a booklet describing the route through Birmingham's "Charming Suburbs". Whether present day Brummies would describe all of the route 11 as "charming" is doubtful - but much of it was charming in the late 20s when the booklet was produced.

How many of today's UK bus routes are promoted as a "good ride" in themselves rather than for commuters or shoppers are as a means to get to some place of interest?

Which routes would be worth promoting in their own right?