Feedback From Our Readers

I always thought the Snake refers to the Cavendish family symbol, and Wikipedia agrees. 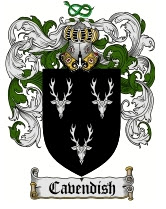 The name of the road matches its winding route, but actually derives from the emblem of the Snake Inn, one of the few buildings on the high stretch of road. In turn, the pub's name and sign were derived from the serpent on the Cavendish arms of William Cavendish, 6th Duke of Devonshire. In the early 21st century, the inn was renamed the Snake Pass Inn, such that the inn now refers to the road that referred to itself.

The Inn is sadly permanently closed (since Oct 2019) and is now a private residence, though the adjoining coach house is available on Airbnb for self-catering stays.

The X57 will have to negotiate Mottram traffic lights, which - pre-Covid at least - had monstrous traffic jams throughout the day, sometimes as far back as Hollingworth. 40 mins from Glossop to Manchester therefore looks very optimistic.

There are two sets of lights at Mottram, the first where the GREEN road bifurcates to the right ... 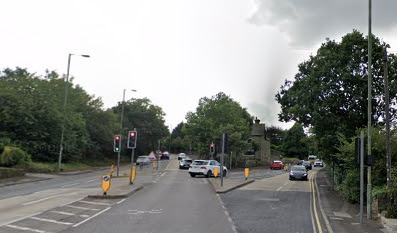 ... and the second at the LIGHT BROWN road junction in Mottram town centre. 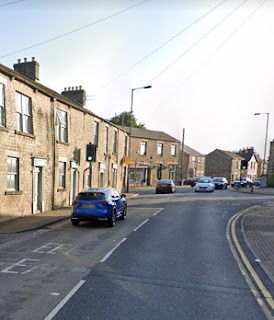 Congestion is specifically quoted as a reason for the decline of the 6/236/237 in Martin Arthur's 'The Long Reach' ... 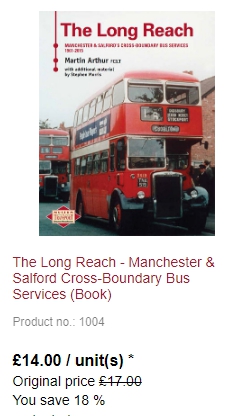 ... a study of Manchester's Cross-Boundary services- still available from GMTS's online shop and, for my money, one of the most intelligent and interesting bus books ever written (and I don't even come from Manchester).

fbb has ordered the book from Manchester Transport Museum on-line shop; reduced price AND free postage, so how could he refuse?

Whoops fbb Forgot
Although obvious (?) from the map ... 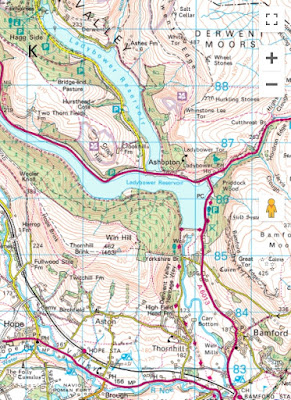 ... fbb should have stressed that the Sunday X57 serves Bamford Station and thus MIGHT provides a possible service from Manchester via Hope Valley trains to The Derwent Visitor Centre at Fairholmes. But you will have nearly 40 minutes to wait on train journeys from Manchester and, even better (!) you will just miss the train  back.

When the Woodhead Line between Manchester and Sheffield was opened, no line was planned to Glossop. A station named "Glossop" was opened near the present Dinting but the Earl of Howard (big toff) paid his own money (he had plenty) to have the short spur to Glossop built. He had a small country cottage at Glossop ... 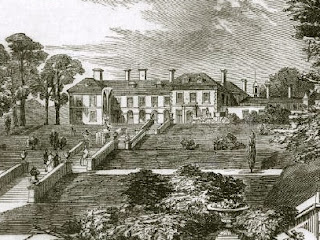 ... owned land and had various business interests in the area. 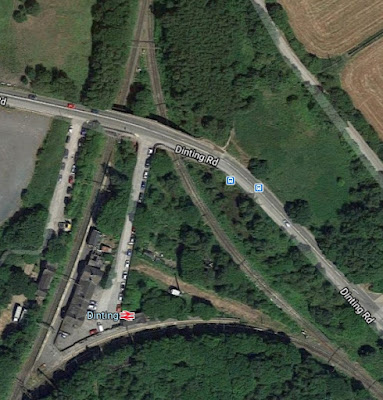 The triangular junction at Dinting allow trains to run:-

The station and its two remaining platforms are in the apex of the triangle at the Manchester end. 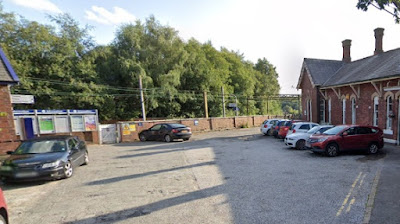 In the late 1930s electrification of the Woodhead route was instigated by the London and North Easter Railway (LNER) but work was suspended for the duration of WW2, so electric trains did not run until 1954. 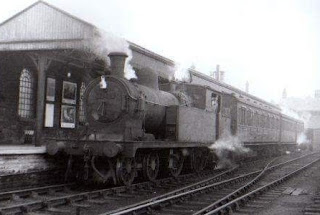 ... LNER ordered some 3-car elelctric trains for the "commuter" line, later classified as 506 by British Railways. These were firstly green ... 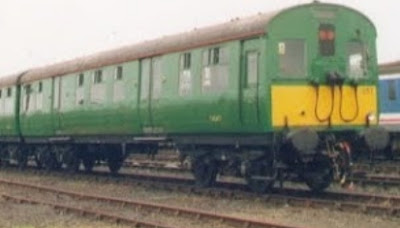 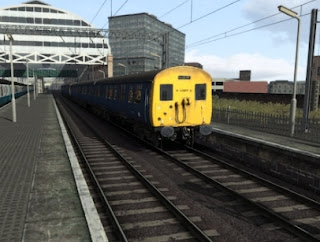 ... and finally blue and grey. 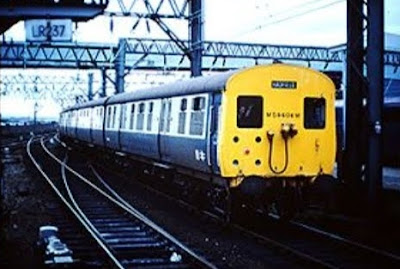 When these were pensioned off in 1984, some hand-me-downs filled the gap until the present class 323s started work. 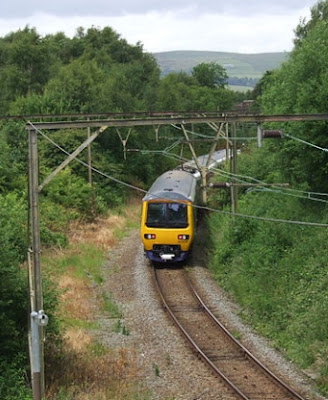 So the question of the moment is, "Will Hulleys X57 tempt Manchester commuters and shoppers away from the train?" 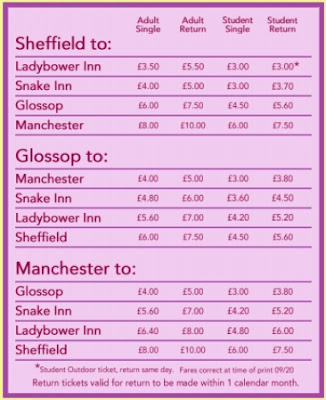 So the basis for comparison is £4 single and £5 return on the bus.

So there is a saving, but at the cost of a queue at Mottram traffic lights (see above!). Additionaly there is a plethora of reduced price tickets for regular travellers assembled by Transport for Greater Manchester.

Whilst at Glossop, a quick look at the station may be in order.

Originally with two platforms, a shorter parcels bay and a well-used goods yard ... 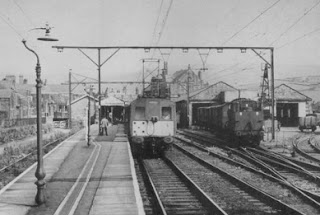 ... there is now only a single track serving the leftmost platform face, overgrown and disused in the above picture but brought back into glorious beauty to allow development of the rest of the site.

Where local folk came to collect and deliver their goods ... 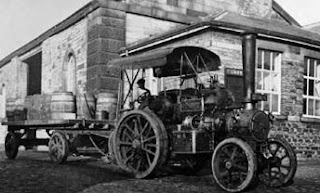 ... is now bricked in and converted tastefully to a Co-op supermarket ... 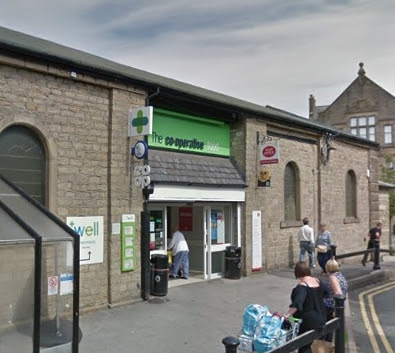 ... with goods yard itself as the inevitable car park. 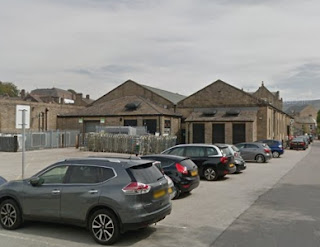 The remaining but limited station facilities are on the northern (platform) side. 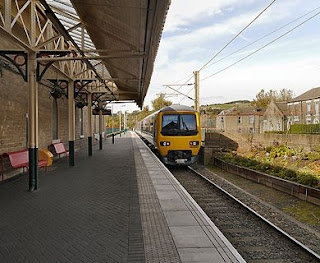 One pleasing feature is the retention of the old varnished wood booking window. 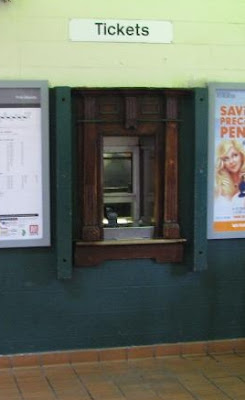 And, pedantically, where does the X57 stop in Glossop? Yes, just outside the station on Henry Street. 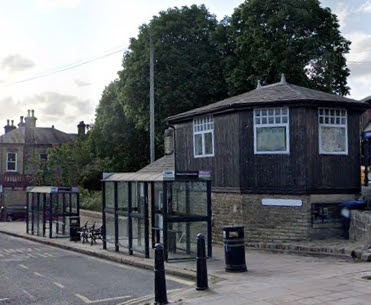 But look! The Street Signs have been painted out! 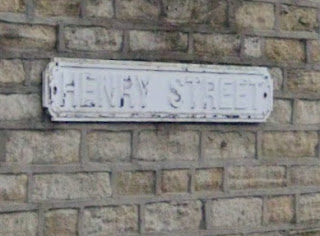 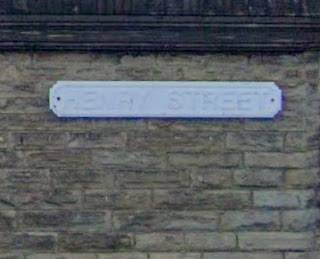 ... and Streetview now names it as Norfolk Square. 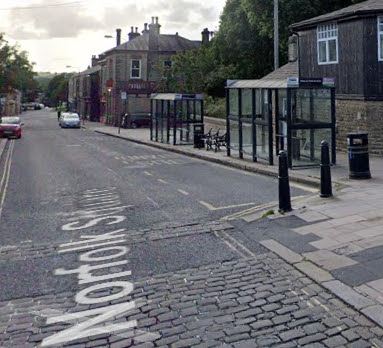 So it is Glossop Norfolk Square and Former Snake Pass Inn. No doubt in about 20 years, the bus industry will have caught up with reality - but, hey! No rush chaps!

The conclusion remains unchanged; namely that reintroducing a service which has not run for 52 years is ... well ...

No doubt one of your author's many correspondents will be ready to take a potter over the Pennines one day soon after 25th October. Or maybe Mrs fbb would like a few days' break in Sheffield?

Oddly, as of yesterday, there was no mention of the X57 on Hulley's web site! Apparently all their customers are only bookers of the face - or twits!