You Get Your Kicks on Route 66

As the late, great, Nat King Cole didn't quite sing ...


If you're in York, and go to Uni,
Don't consider car; that would be loony.
Get your kicks on Route sixty-six.

It winds from Heslington into York,
More than half an hour to sit and talk.
Get your kicks on Route sixty-six.

Won't you get hip to this timely tip:
When you make that University trip
Get your kicks on Route sixty-six.

... with Your Bus in Nottingham. This Your Bus is First's Your Bus having beaten incumbent Transdev to the exclusive deal accessing the private estate roads of York Unuversity. The vacation service (every 15 minutes) between City and Uni started on August 2nd and, according to First's recent press release, has done very well so far.


The new 'Your bus 66' service has got off to a flying start attracting over 35,000 customers since launch on 2 August. Customers have welcomed the high-quality bus service and free Wi-Fi with integrated ticketing giving staff, students and visitors access to the whole of the York network through First's great value fares.  Students can now also take advantage of a new 20-trip £17 smartcard ticket available on the 'Yorkey Card' ... 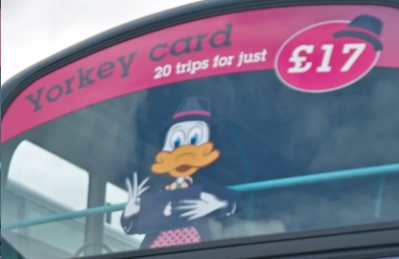 ... from the Student Union shop or on the bus from the driver.

The full term time 66 service starts on 28th September with 9 buses an hour running Monday to Friday with a slightly reduced service on other days, every 20 minutes in the evenings and hourly night buses. (click on the timetable for a larger view) 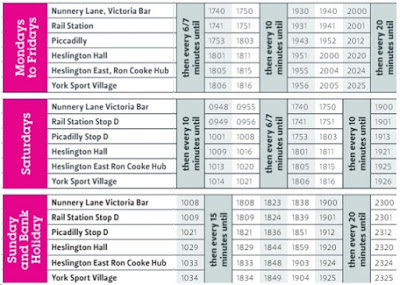 On the same date the University's free shuttle bus ub1 will start running every 30 minutes using a state-of-the art electric vehicle (ditto clicko); the lightning bold refers to a half hour break when Mr First plugs the bus into a convenient socket, slips 50p into the meter and charges up the batteries. 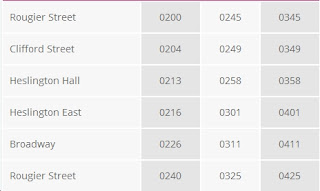 ... and an early morning University to Hospital service.

These are pretty much direct duplicates of services run under a smilar contract by Transdev. 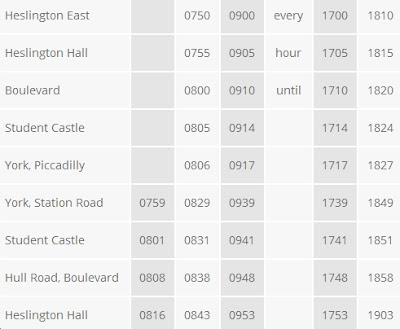 ... will be launched to complement the 'Your bus 66'. It will serve the University, Student Castle and Kings Manor providing a city centre loop including Sainsburys, the station and capturing all of the main bus hubs before returning to the University. 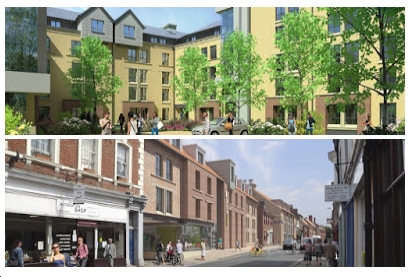 And in case you wondered, Student Castle is a private development in the centre of York providing student accommodation. It is a "brand" ...

... with similar posh flats (?) in Bristol, Manchester, Newcastle, London, Cardiff. As a bonus, in York, you get free travel to the uni of the new 56. 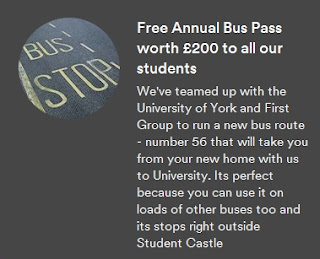 And the Kings Manor?

As the city-centre premises of the University of York, the King's Manor has a sure place in the future. The staff of Archaeology, Medieval Studies and Eighteenth Century Studies have built up unparalleled reputations through innovative teaching and world-leading research, characteristics which have become the hallmark of the University.

Obviously the ub1, cb1, hb1 and 56 operate on days and at times specifically for Uni students and staff. All bus travel is FREE withing the University campus area. (again click o enlarge)

This blog was prompted by a "new livery launch" with the usual clutch of important people obscuring a good view of the buses and the livery. 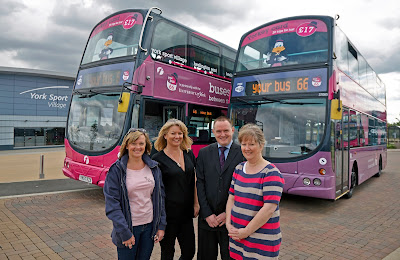 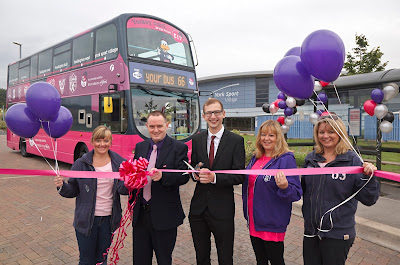 ... cutting the tape for the new routes which don't start until the end of this month! And there is a third livery variant illustrated on the University web site.

Perhaps they will have all made up their minds in a month or so.

In a direct "swap round", Transdev is currently running a route similar to First's vacation-time 4 of old.

The company promised "vigorous competition" with First, despite not now being allowed on the Uni's private campus roads. There is, so far, no sign on the Transdev web site of any increased frequency from the start of term. But the timetable is dated until 19th September ...

... so what happens next? Good old Traveline gives us a clue. Transdev ups their frequency to every ten minutes. (click to enlarge the extract below)


Next rail blog : Friday 4th September
Posted by fatbusbloke at 02:00