A Frustrating Time in Bus-bereft Lyme [3]

As per yesterday's blog (read again) fbb has joined the Axe Valley Mini Travel [AVT] 899 to Lyme Regis (not to be confused with the AVT 899 to Axmouth, OR the AVT 899 to Sidmouth OR EVEN the AVT 899 to Exmouth). Two return trips plus revised positioning journeys on schooldays and operation of these trips on non schooldays (but nothing on Saturdays) replace a two hourly X53.

Loadings were not heavy on this first "new" trip. Apart from fbb who was there from a sense of duty, there was one "senior" from Seaton (confused) ... 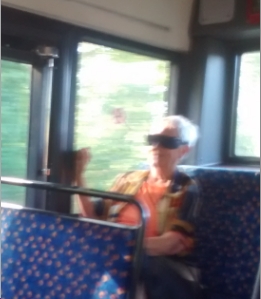 ... one slightly less senior from Sidmouth (not confused) ... 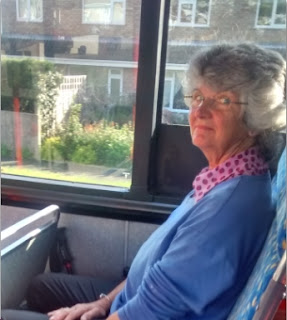 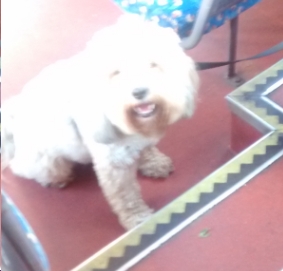 The dog proffered no opinion on the matter in hand.

This No 2 lady was not confused because she had read the East Devon timetable book. She was doing another bit of the Jurassic Coast path, walking back from Lyme to Seaton. Had she come a week earlier, she might well have been confused because the timetable book is dated 20th September, but the X53/899 changes took place on 27th thereof with nothing to indicate this in the book. fbb (you will remember) had asked the driver where he might be terminated (omnibologically, not by assassination).

"I can only get to Coram Tower" he had replied.

"Will you go round the loop?" counter-queried fbb.

"What loop?" can the swift response. fbb was able to direct the driver to the clearly unmarked Langmoor Gardens ... 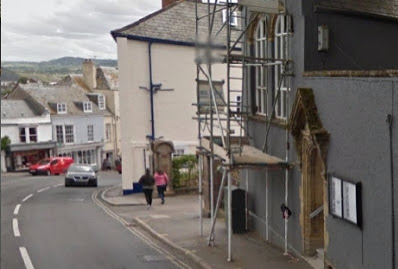 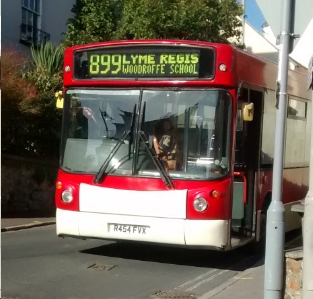 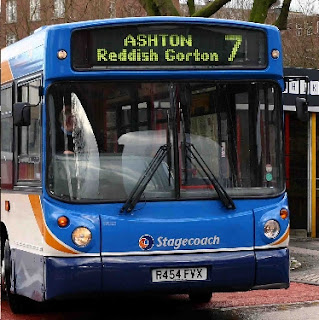 But back to the business in hand. If Shuttle Service X53 or even Shuttle Service X54 really existed, it was timed to depart from the secret Lyme Regis terminus stop at 1120. So how was fbb to fill his time? Of course, breakfast!

Just up from the abandoned Co-op stop was the delightful Penny Black caff ... 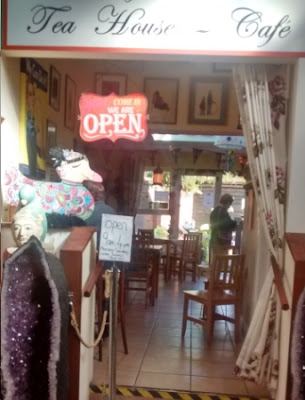 ... deriving its name from being linked internally to the Post Office. fbb enjoyed a sausage sarnie and a mugga ... 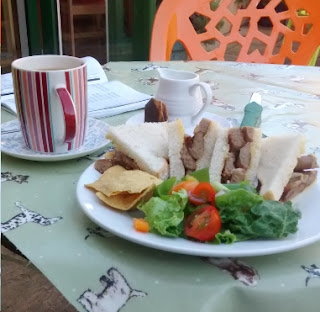 ... in the alfresco courtyard at the rear. At £5.50 a bit pricey for fbb's normal miserly budget, but convenient for part two of his journey.

At 1105 your well-refreshed author repaired to Langmoor Gardens to be greeted by two gentlemen clutching X51/X53 leaflets (un)helpfully supplied by First Bus. TOTALLY USELESS. Surely whoever distributed these should have added a photocopied warning? The shambles lasts for 5 weeks!

One gent was adamant that when Lyme Regis was "closed" First "always" ran the 31 (or X31, or X51) to and from Lyme Regis via Hunters Lodge and why wasn't that happening this time.

With a bus every half hour between Bridport, Charmouth, NOT Lyme Regis and Axminster it would have been simple to cobble together an emergency timetable. Why was this not done?

The evidence suggests that First Bus had a corporate sulk ... 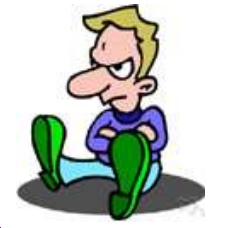 ... and decided that, as Dorest had given them no notice of the road closure, they weren't going to make any (expletive deleted) effort at sorting it out. Dorset would have to pay for the shuttle bus! Or people could walk to Hunters Lodge. So there! Ha! 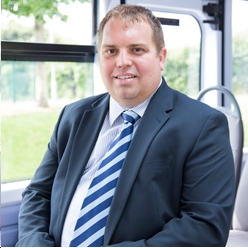 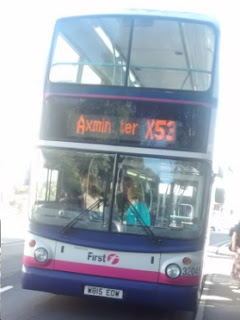 Were they expecting an X54? Who knows? Who cares?

The other 50% were expecting the 1116 to Bridport and were thus utterly disappointed. fbb was kepy busy doing First's job for them. One party of three were aiming for Weymouth for the day and were equally disconsolate when fbb told them they could get there but upon arrival would have missed the last bus back!

They decided to go by car.

It was an appalling example of GROSS MISMANAGEMENT by First Bus; as an absolute minimum, with no bus top signs and contradictory information all over the place First should have provided staff at Lyme Regis to explain.

And changing at Hunters Lodge? Misses the connection by about 7 minutes. Changing at Axminster Station? The Shuttle arrives 5 minutes before the eastbound X51 or X53 departs. fbb's shuttle was early in ... 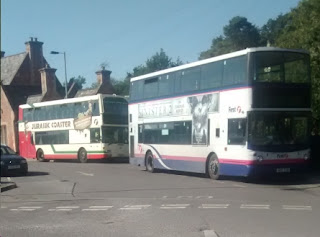 ... so let's hope everything always runs on time.

Unless, of course, you wanted the first X53 through from Exeter which was running 22 minutes late.

Exhausted and profoundly disappointed by what he observed, fbb caught the ever reliable AVT 885 back to Seaton; and an opportunity to check with the now open TiC.

"But it isn't right; buses are not running to Lyme Regis."

"But have you any information about the special arrangements?"

"We did have ONE COPY (fbb's capitals) of the shuttle timetable but it's gone."

So no printed timetables from First Bus in Seaton. It's no wonder the service "wasn't performing well" if the company doesn't bother with publicity! DISGRACEFUL. And no information about the Lyme Regis blockade ANYWHERE in fbb's little town. .


Next bus blog : Thursday 1st October
Posted by fatbusbloke at 02:00