A Frustrating Time in Bus-bereft Lyme [1]

Well now; fbb certainly felt a bit like Henry Higgins after two frustrating visits (by car!) to Lyme Regis to try and sort out what was happening "on the ground". Visit number one (brief) involved a drive down the hill to photograph the signs at the entrance to the narrow road-completely-closed bit. 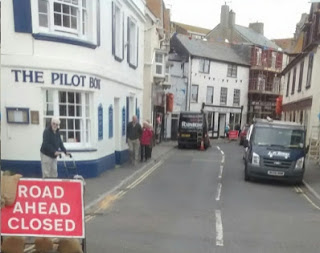 fbb also noted that the westbound bus stop had a couple of laminated notices attached and an occasional perplexed passenger on their knees in an attitude of prayer trying to read them.

Of course they (notices, not people) could have been put in the frame ... but why bother with all that Allen key business when you have a roll of string and some scissors!

The erect chappie above was reading the timetable, silly fool! The eastbound stops are up the hill (gasp gasp, gurgle gurgle) outside the Co-op. 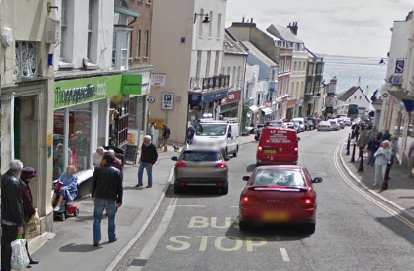 Neither of these main stops are served during the road closure. A more visionary "partnership" might have decided to close the little car park near the sea ... 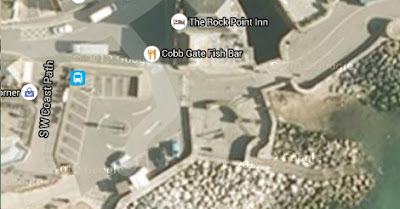 ... and use that as a temporary bus turn-round. Then all existing stops on the western side of the blockage, the busy town centre ones, could have been served. But that would be sensible and helpful to passengers.

Instead, these oft-maltreated and ever-suffering contributors to bus company profits have to find Langmoor Gardens.

And, of course, the "authorities" include in the temporary notice a simple map showing the neglected few where that is don't they?

No. "Tough luck; sort it out for yourselves." 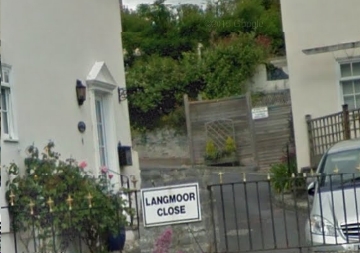 ... a gated cul-de-sac which, even in this incompetence, was unlikely to have a bus stop hidden therein. 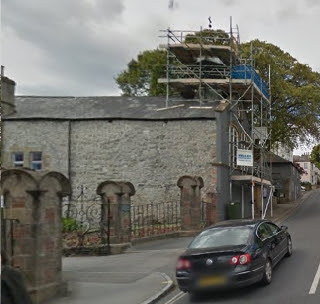 But what is this entrance gateway opposite? Was this Langmoor Gardens?

Yes it was! But where was the bus stop "flag" and timetable frame?

There ain't none. "Tough luck; sort it out for yourselves." To be fair (why?) First Bus notices did clearly state "Langmoore Garden" but they could have added "on Pound Street" ... 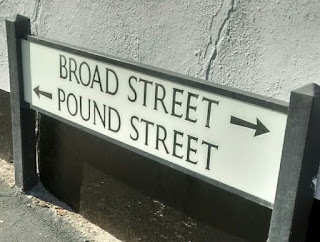 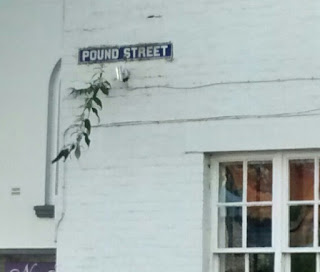 But there, at the non existent bus stop, outside the nearly-hidden Langmoor Gardens was a significant cluster of people for the X53 westwards to Seaton, Beer etc. 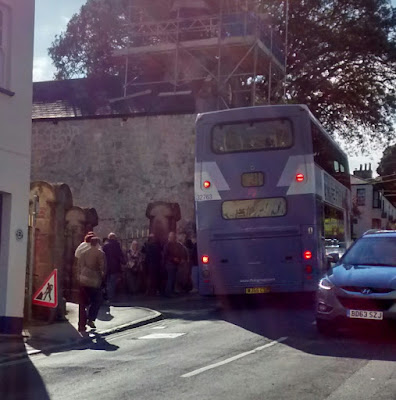 And within about 15 minutes was an even larger cluster awaiting the X53 to Charmouth, Bridport and points east. 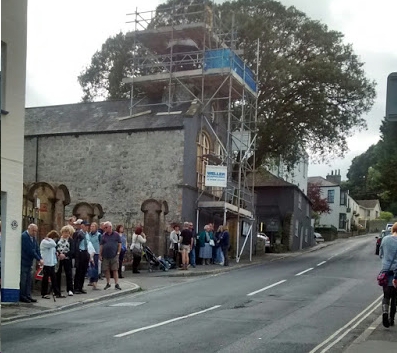 Joining the larger queue were a lady and gent accompanied by magnificent black dogs (thus not the Churchill kind) who wanted to get to Seaton. They had been utterly confused, missed the correct bus and were obliged to seek solace in Langmoor Gardens for nearly another two hours. 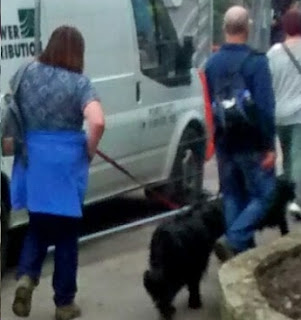 "Tough luck; sort it out for youselves."

Now, patient readers, please remember that during the first phase of the road works, the only buses venturing down the hill from Hunters Lodge to Lyme Regis are the two hourly X53s. 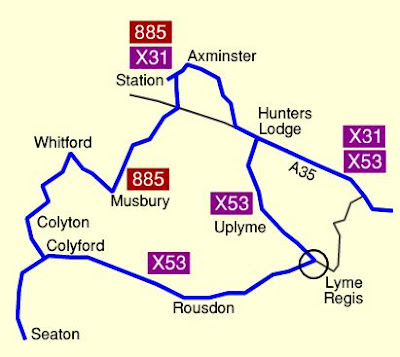 Were you foolish enough to want to go from Lyme to Axminster, you would need to change at Hunters Lodge as per yesterday's blog (read again). So on Monday (next) fbb will look at the excellent (ha, snigger, ha) bus stop facilties at Raymonds Hill, where sits the pub and restaurant that has refreshed weary travellers since the 16th Century. 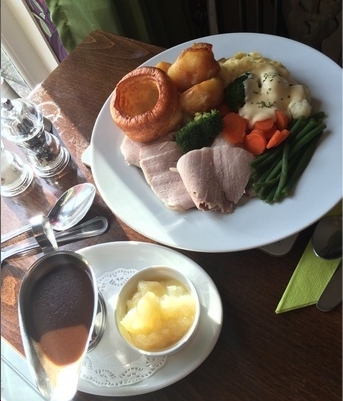 Memo to self : must book a table one Sunday.

Also on Monday, fbb will be paying a THIRD visit to Lyme (this time by bus) to check the new timetable which has stupidly been introduced bang in the middle of the road closure. It should, at the very least, have been postponed for four weeks.

So by Tuesday, your eager investigator might understand phase two of the grand grotty plan for Lyme Regis.