Railway modellers have been thrilled by the availability of a superb scale model of one of London Underground's latest and sophisticated trains. The real thing is a continuous tube ... 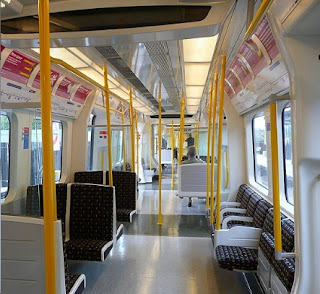 ... with "bellows" type connection between carriages but the models are less well endowed in this area because model rail corners are much sharper than the real thing. No doubt some keen modeller will create a better bellows! 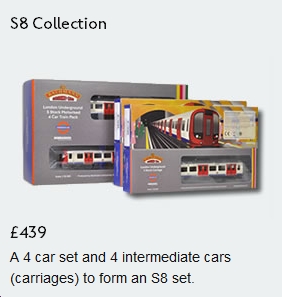 It would cost a modest £439, but it was, as many reviews announced, the first ready-to-run Underground Train ever manufactured. 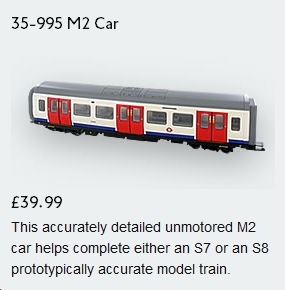 Or was it? Most collectors know of the EFE unmotored two car models that have been available for some time.

A company called Radley Models will fit a motor bogey for you. See their web site (here).

Then, if you were willing to accept something a little less realistic, you could buy "Victoria", or other character trains (Bakerloo, Circle, Jubilee and the twins, Hammersmith & City) from the Underground Ernie TV series. 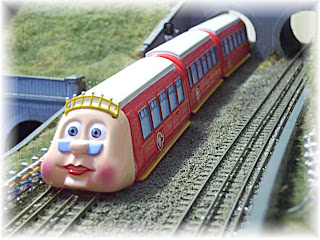 OK, maybe not a "proper model". The range is now discontinues but some sellers MAY have second-hand stocks available. ebay has a few.

But fbb wants to take you back a lot further; over sixty years in fact. fbb used to live here ... 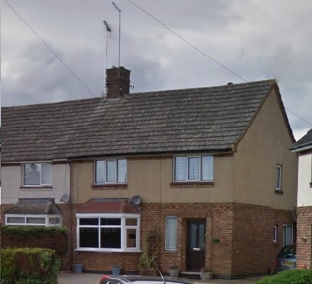 ... 15 Valley Crescent, Little Billing, Northampton. A few doors away, in one of the so-called Norwegian houses, lived Keith Bonham. 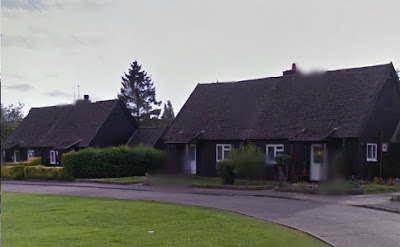 fbb's mother, a bit of a snob, did not encourage the friendship as Keith was a "rough village boy"; but Keith had a model railway and every other boy in the village was venomously jealous. One joyous day, Keith invited a little not-yet-f-bb (aged 8 or 9) to come and see.

The first "image" fbb remembers is that there was a station, Hornby "O" gauge timplate, possibly dating from pre-WW2.

Running past it was an oval of three-rail track made of bakelite (?) and zooming at great speed round the "oval" was a weird red train.

The London Underground trains were electric, and the lack of competing "underground" model trains represented a gap in the market which didn't necessarily put Ever Ready at such an obvious disadvantage when it came to their lack of trackside accessories. The model was based on the 1930s Southern Railway Waterloo & City tube stock being finished in the red LT livery of the time with Bakerloo Line 'Stanmore' destinations.

fbb was not impressed. It didn't even look like a proper underground train.

But it does look very much like the former stock from the Waterloo and City line ... 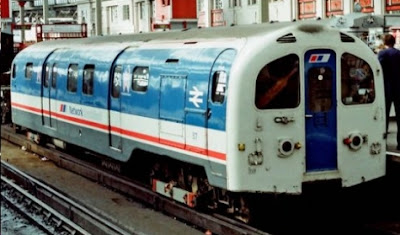 ... so not a "proper" underground train at all. The real ones were never red.

Later research revealed an on-line picture of a box priced at 66/9. That is £3 6s 9d in real money and would inflate to a price in 2015 of about £80. So a lot cheaper than Bachmann's S stock even if you limited your purchase to an unprototypical three cars.. The set included a controller ... 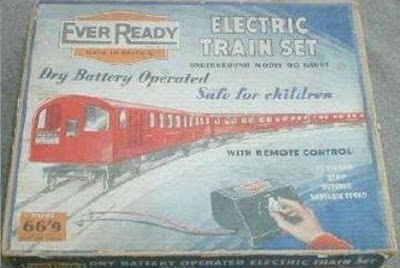 ... but batteries were extra. 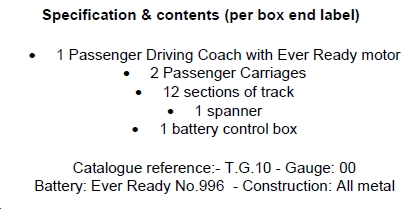 Occasionally these sets do appear on the collectors market and the sell for a lot more than £80! 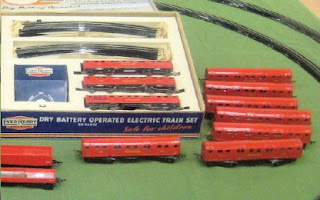 Indeed a chum at the model railway club now frequented by fbb had recently sold one complete and one part set to a dealer as part of a clear-out of a friend's loft. A renowned Underground model (Abbey Road) occasionally runs an Ever Ready three car unit as "an honoured guest" 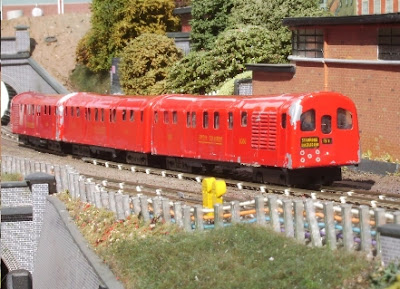 Sadly not running when this little chunk of video was videoed (videod?).
So the effusive welcome of Bachmann's new "S" unit models as "the first ready-to-run" underground model train in the UK is, pedantically, incorrect. They were "pipped at the post" by over 60 years!

If you are desperate enough (and wealthy enough) to rush out and attempt to buy an 8 car unit, please note that the models are produced exclusively for the London Transport Museum whose "shop" web site is available (here).

Next "secret" blog :Sunday 20th September
Posted by fatbusbloke at 02:00