... And a Sought-out Supplier of Same.

So the old man started thinking. "Where was it that I went as a young lad to look enviously at too-expensive-for-me Hornby Dublo stuff every Christmas?" Watts (a furniture shop) sold Triang, Coldhams and Pooles both sold toys; but there was one special emporium which became a Yuletide mecca for miniature ferroequinologists. But fbb couldn't remember.

Trying to remember the name of the shop in Abington Street ... 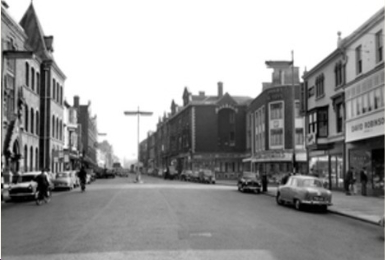 ... (NOT Watts) that had a huge toy display (Dublo, Dinky, Meccano etc) in a shed "right through at the back".

Can your brain help?

Reason for this query. I have just bought some second-hand signals for the model railway. Although they were advertised as "Hornby", they are actually from the Hornby Dublo range originally introduced in 1938.

But even he couldn't remember.

There was an even better toy department in the basement of a store near the public library in Abington Street, but I've forgotten the name. Johnson's?

Then in desperation fbb typed "Model Railway Shops Northampton" into the dreaded search engine. Up popped an article from the Cogenhoe (promounced Cook-No) and Whiston (pronounced Wish-ton) Heritage Society newsletter for 2012. 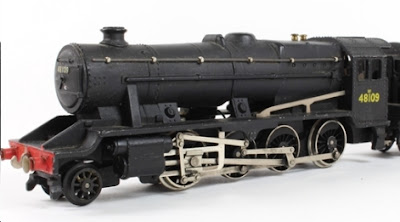 ... and about five wagons and brake van with a small circle of track and controller. WH Johnson, 82 Abington Street were Hornby dealers and I was a frequent visitor there especially after I started at the Grammar School and was in town every day! 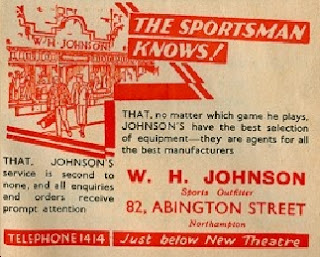 W H Johnson was a wonderful shop. It sold all sorts of things, described in Kellys Directory 1960, as ironmongers, but also model railways. I think it used to have a little  railway running round in the shop window.

In the run up to Christmas it was a real Aladdin’s Cave, as they opened up a huge store room at the back, down some stairs, to display a whole range of toys and model railways.

Christmas. Sigh! There was a Hornby Dublo model railway which looked a bit like this retro exhibition set-up. 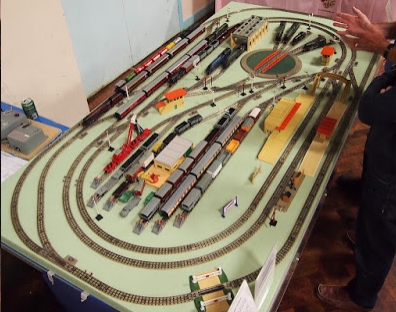 There were displays of all the current Dinky Toys like this one from the Brighton Toy Museum. 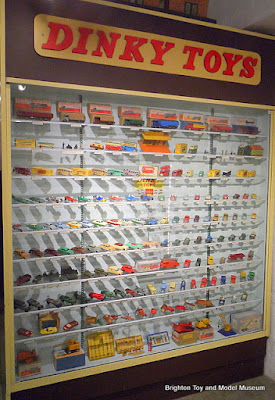 But the Christmas highlight was always the huge Meccano model. fbb remembers the Blackpool Tower with working lifts and internal and external lighting. Unattainable for the lad, of course, but such an open-mouthed wonder.

fbb remembers going to Johnsons with his father for nuts and bolts for his own Meccano set; and insisting on brass because the nuts of un-brass kind would split if you tightened them too much. Boohoo, snivel snivel!

One of the highlights of one particular Christmas (1957) was the brand new Castle class loco. 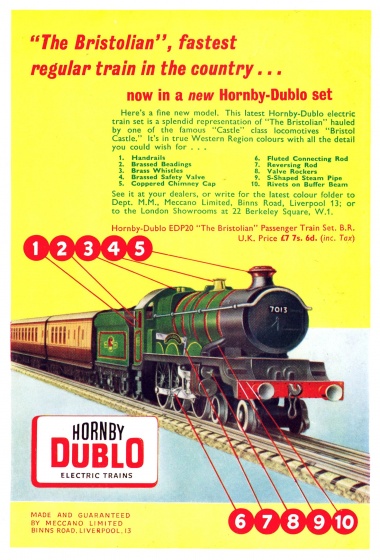 For its day, this loco was even better than sliced bread. You could buy it as a set with GWR chocolate and cream coaches with "Bristolian" destination boards on the coaches. The picture below is NOT the set as originally advertised, but illustrates how super-smashing and special this package was. 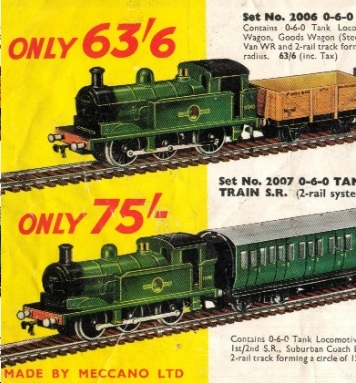 fbb thinks (unreliably) that W H Johnson closed down about then; he can't remember two-rail displays.

But it does explain the boxes. 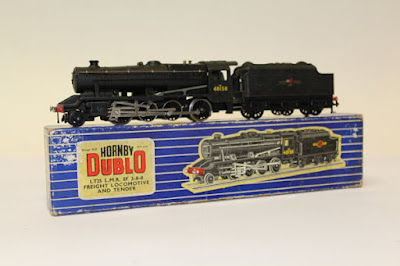 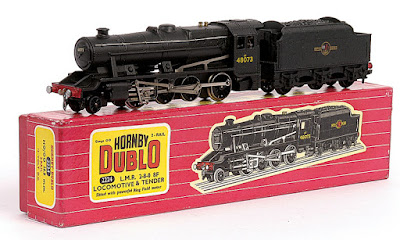 ... the same loco in two rail was in a red box. Stuff that could be used on both was also in red. 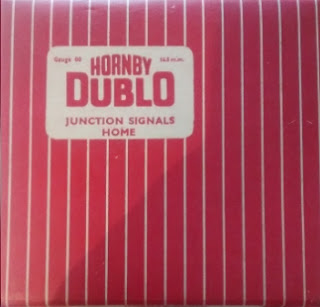 Now if you want new signals today, you can get super swish kits from Ratio (part of Peco) ... 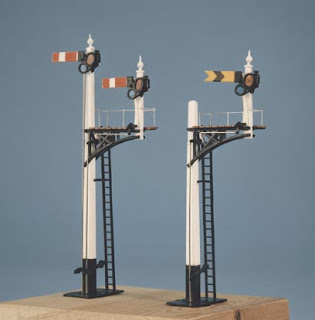 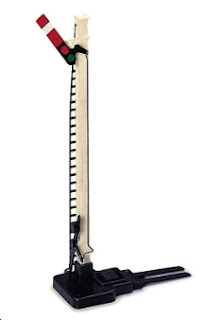 ... from about £10. Or, if you are wealthy, you can get Dapol's beauties with electrical control to sink deep in your baseboard.

One of those will set you back about £23. It makes fbb's Hornby second-hand jobbies at about £4.50 each seem good value!

Fortunately, very few models need a gantry such as this! 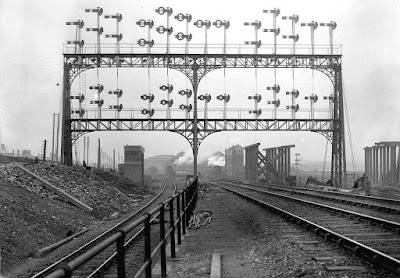 You would need all your "knowledge of the road" to figure this out as you approached rugby with a non-stop Glasgow express.

Hence Dave's pictures. Google knows when and where they were snapped but not by whom. Although the Crete visit was in May 2014, the upload thingey has only just done so. It, poor demented program that it is, has tagged these snaps as "recent" arrivals.

Hence the offer (declined) of a Hersonissos slide show.

It's all very simple really????