First Bus had six experimental gas buses in operation in Northampton in the early 2000s. 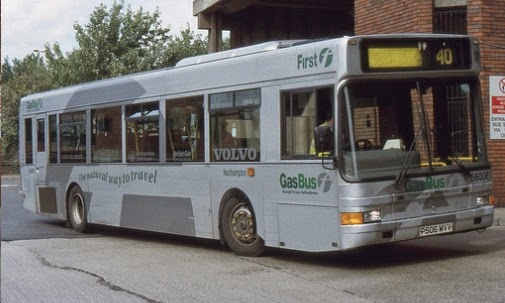 They were not very successful and the experiment fizzled out sooner than the promoters had hoped. But Reading has gone gasbag big time. The fbb's bus to Coley Park Baptish Church was gas powered and branded Bronze Line. 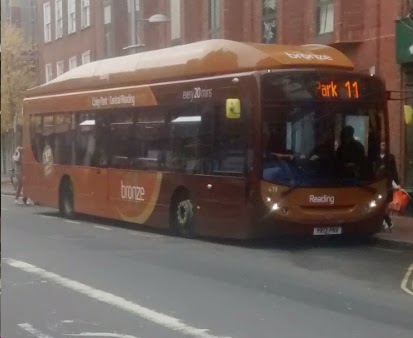 For keen vehicle watchers, the bus is a Scania K270UB with Alexander Dennis B40F body.

Like the promo video at the head of this blog, the bus duly announced itself and the fbb's duly boarded. But, whilst waiting, a check of the shelter revealed the now-usual lack of timetables. 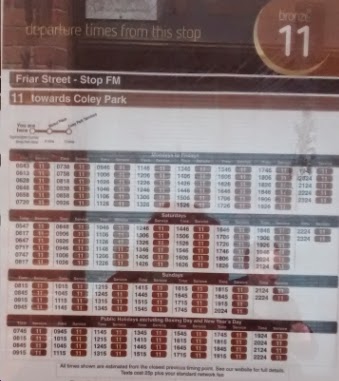 The route is short, so there is an argument that here, maybe, a timetable is less necessary, but there were none displayed anywhere in central Reading. Also lacking were maps. fbb did not spot a network map anywhere and there was no route map on stop FM. But fares were displayed - good! 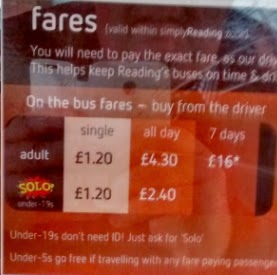 But once inside the bus, there was a well stocked rack of Bronze Line leaflets. These did contain proper timetables, fares and two maps, one of line of route and one detailing stops in the centre of town.

The bus was clean, warm and very smart. The next stop display was nice and big for a short time before each stop ... 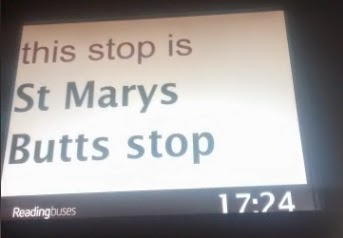 ... but most of the time it was cluttered with promtional material with the next stop wording less than legible from seats towards the back. Pity. Fortunately the spoken announcements worked well. The fbb's wanted to alight at a stop called "Roundhead" and peered expectantly out of the window for the pub, just in case they missed it in a pitch of frenzied excitement. 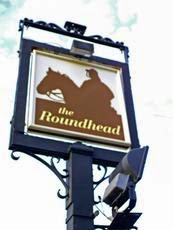 Sadly the pub is no more; its empty sign pictured on the return journey. 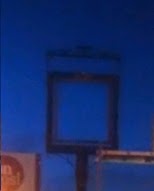 It has been demolished and replaced with a block of "bijou" maisonettes. It once looked quite hospitable! 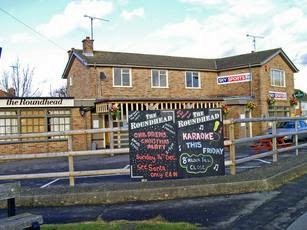 Alas, the Friday Karaoke failed to stem the decline in customers.


There were niggles but Reading Buses services are (usually) easy to find and easy to use. On-line the company is first class. There was, however, one final disappointment. The council tax payers of Reading have an excellent bus company, cheap fares, frequent and comfortable modern buses, so ... 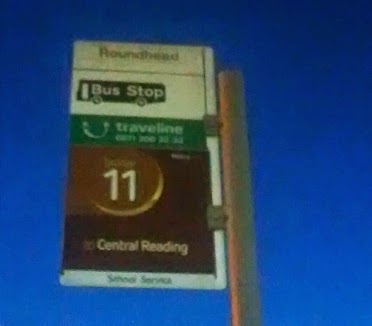 ... why, oh why, make your customers pay a high price to obtain information from a remote call centre? Absolutely daft and potentially counter-productive.

The birthday party was entirely for the children (a bouncy castle, eschewed by fbb, afraid of instant deflation) with limited nibbles ... 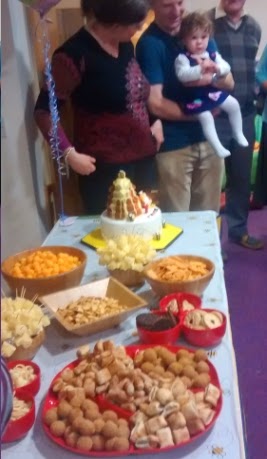 ... which didn't seem to excite the star of the show. One of the adults had to point out to fbb that the cake(top centre in photo above) was not an erupting volcano, but a beehive. For some reason, bees were the theme of the afternoon. 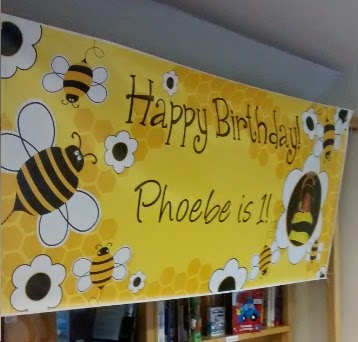 And so to the return rail journey and another example of why timetables are so necessary and journey planners less than helpful.

This is what National Rail told fbb for a journey after 1730 (approx arrival time of  bus/walk from Coley Park) ...

... and arrived home a whole hour earlier. Of course, the 4 minute connection was risky; of course the fbb's might have spent a whole hour at Basingstoke station with no refreshment room open. But it was worth the risk. On numerous occasions your elderly hero has warned people of the less than ideal connections available from Reading to the Axminster line but in every case the one advised has taken the risk and made the officially unmakeable connection.

An impersonal journey planner cannot communicate that "fuzzy logic". A real local person can. Would the folk answering the phones at National Rail Enquiries (08457 484950) have the local nous to offer a choice of risk or easy? fbb tried.

No they haven't. That's why we need local telephone enquiry offices. To save fbb an hour in the cold!

fbb also tried the recorded service with the same result; although it did offer a later departure via Exeter which would have been unnecessarily more expensive. The female dalek who replied also played an "engineering warning" for the journey via Basingstoke. It told fbb, irrelevantly, there was a 20 minute delay between Reeding (sic!) and Westbury due to engineering works.

A small group of the less savoury members of society, "gentlemen of the road", have been given the nighttime job of guarding a farmer's flock of rare-breed sheep in the face of growing rural crime. In return for a few packets of Woodbines and a bottle or two of IPA they are to ensure the overnight seasonal safety of the ovine rarities. 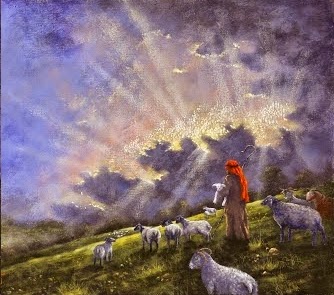 They are stunned by loud noises and bright lights in the sky which they believe are telling them to go and see a baby, a home birth, in a back room of a low grade boarding house in the nearby village.

Not only are thy daft enough to respond, leaving their charges and risking substantial opproprium from the farmer, BUT off they go and tell everyone what they have done! Thus reports Luke in his gospel. (Chapter 2 verse 19 is emphasised below)

Shepherds were about the lowest rung in society back then, banned from the Temple because hey had to deal with dead bodies and about the least like group to have a "religious experience". But over the centuries we have misunderstood their report.

The angelic message was NOT, absolutely NOT:- 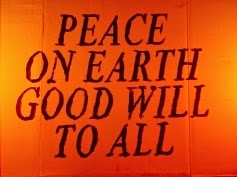 Hang on, our readers are saying, we all know that's what they said.

The peace of God comes from pleasing him; and we start to please God when we accept the forgiveness of Jesus, made possible by his sacrificial and substitutionary** death on the cross.

And it all kicks off with Christmas.