The Search for the Holy Grail Service 9

Last Thursday, fbb mentioned service 9 from Crewkerne as being a bit of a mystery. The above table was copied from Traveline, and there was a photocopied copy thereof available in the TiC. The opertator was listed as "Somerset County Council" but fbb was unable to corroborate this.

Somerset's contribution to bus publicity is a thorough and committed as your blogger's determination to prepare for the next London marathon; so no hope there! Comment writers proffered some further thoughts ...

... which prompted a nagging doubt to begin to nag. The nagging grew when fbb checked the timetable in the frame ... 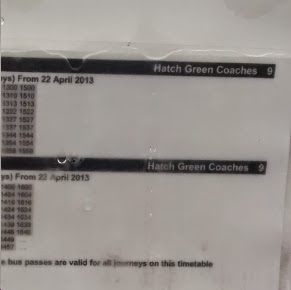 ... Hatch Green Coaches as operator. Does the 9 still exist? With no operator to check, and no chance of anything much from the county, there was only one option; to return to Crewkerne, lurk menacingly on a street corner and see what turned up. Domestic negotiation revealed that the Christmas Gift Buying Department (aka Mrs fbb) would quite like a visit to M and Co to source jumper for No 3 son. So on Friday the search for both led back to Crewkerne.

At 1030, fbb parked his bulk on a bench outside The George to await developments. The next departure was scheduled to be service 9 at  1045 to Donyatt and nothing else was due for a while.

Look, a little knot of four. Were they waiting? 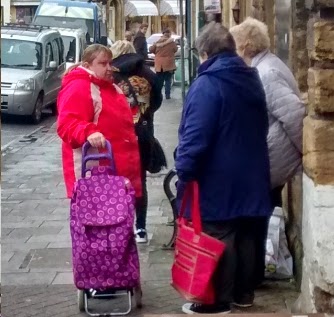 After a brief interlocutory interlude, blue and pink shuffled off. But grey (light) and Grey (dark) were joined by others soon after. 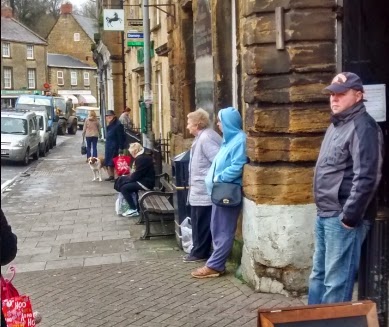 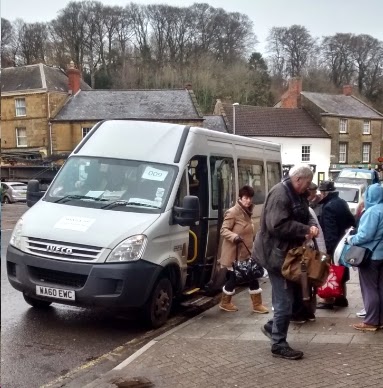 WA60 EWC pulled in at 1048 and disgorged six passengers! The four attendees (plus dog) sprang into action and boarded white bus man's Iveco. 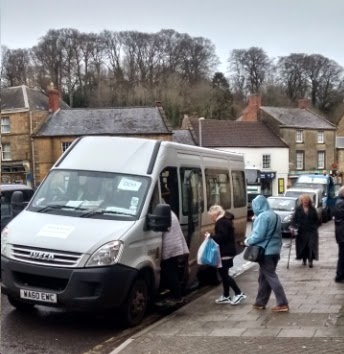 It had no destination blind ... 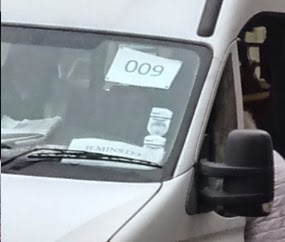 ... and the other windscreen label was illegible beneath he windscreen wiper. It had a fare table plus a stern warning about the carriage of dogs being "at the driver's discretion" ... 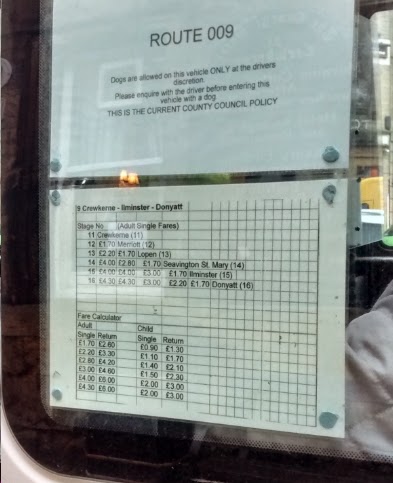 ... but no legal lettering claiming ownership. (Doesn't that make the whole operation illegal?) Stuck on the side was a tatty notice also proclaiming route 009 and the tattiness suggested that it (and the vehicle) had been through numerous mechanical washing contrivances.

The minibus was equipped with a rear loading wheelchair lift and the registration was WA, allocated to the West of England. There was no record of the vehicle or its owner on line.

But we now know that there is still a service 9 from Crewkerne!

Undaunted by the failure of Mrs fbb to find a suitable Crewkernely gift for No 3 son, the gruesome twosome, showing no fear for their personal safety, pressed on to Taunton via the ludicrously cheap Park and Ride. 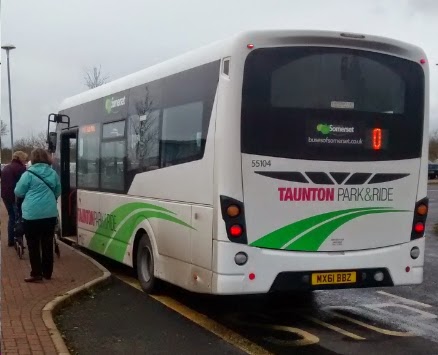 Whilst his good lady successfully completed the festive gift purchases, fbb paid an inspectorial visit to the bus station. The (un)dramatic transmogrification of First Bus into Buses of Taunton and/or Somerset showed signs of moving forward at its customary low speed. But, there were more buses (60% in the 45 minutes of chilly observation, 75% if you count the non-standard Park and Ride) in green and less in dented off-white, pink and purple.

But, in a speedy move taking only 9 months, the enquiry office-cum-waiting room is now complete in all its sumptuous luxury. We now have slime green armchairs (very cumfy) ... 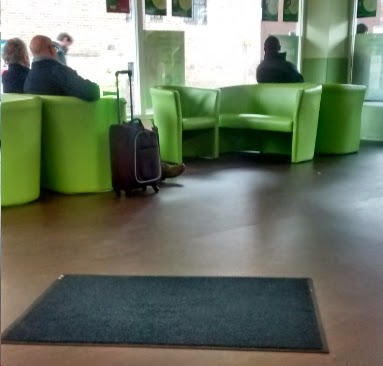 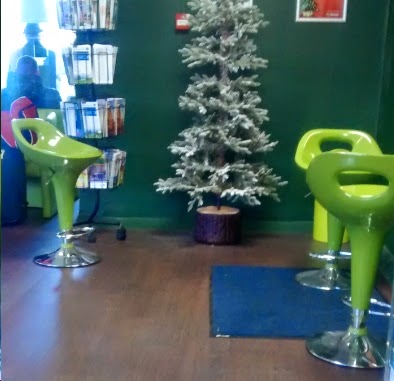 ... and a token plastic white-with-fake-frost-effect tree.

So, slowly but unsteadily, Buses of Somerset is taking shape.

Maybe it will all be finished just in time for a complete change of brand or image? 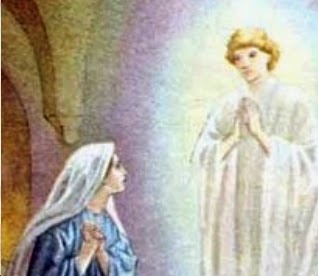 In many churches today (the 3rd Sunday of Advent; Christmas hasn't started yet, ecclesiastically!) the Bible reading will be Mary's song of praise at the news that she was to bear the Holy Child.


My heart praises the Lord;
my soul is glad because of God my Saviour,
for he has remembered me, his lowly servant!
From now on all people will call me happy,
because of the great things the Mighty God has done for me.
His name is holy.
From one generation to another
he shows mercy to those who honor him.
He has stretched out his mighty arm.
Many people struggle with angels (which are described as male in the Bible; and never with wings or a tinsel halo except when in heaven); many people reject the idea of a virgin birth as scientifically impossible (too true, buster) or the work of Joseph (socially about 99.99999% impossible).

An omnipotent God who is outside of our space and time, whose abilities transcend the so-called "laws" of physics, can do anything he wants. Making a baby is "seemples" compared with creating a universe!

It is the central miracle of Christmas that makes it worth celebrating.