A Protracted Perusal of the Potteries [4] 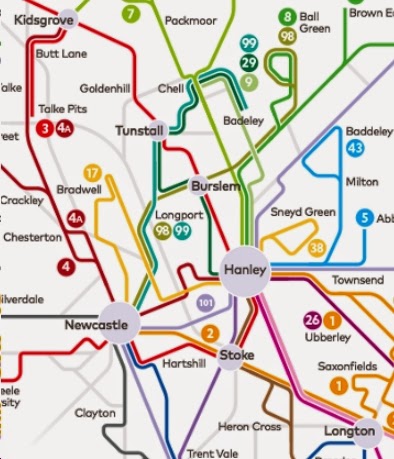 Newcastle and Kidsgrove were not (and are not) part of Stoke-on-Trent. That leaves Bennett's Stoke, Hanley, Longton, Burslem and Tunstall. First Bus (like Bennett) ignores Fenton which is where the roads from Longton to Stoke and Hanley diverge. The above map may help folk who, like fbb, have never visited the Potteries.
----------------------------------------------
THE RETURN OF THE FRUIT
(unsuitable for persons of nervous disposition)
Attempt One

Tangerine 1 and 2
These two have been jiggled as follows:- 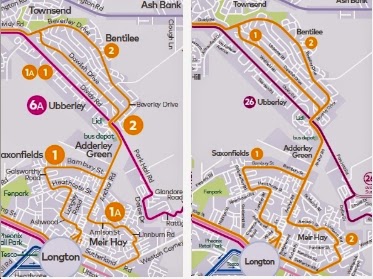 Service 2 is extended via Meir Hay, replacing 1A and is continued back along the main road to Newcastle replacing 1. Frequencies are largely unchanged.

In an earlier life, these routes were branded and promoted (with special fares offers) ... 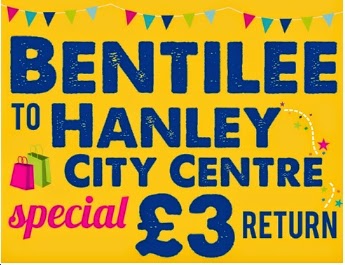 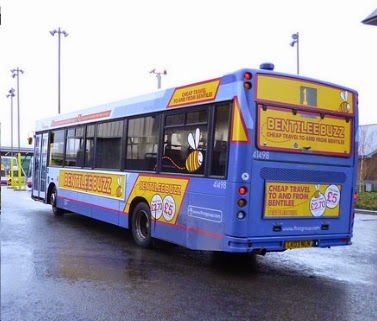 Cherry 3 and 4
Apart from the extension to Madeley mentioned in an earlier blog (read again), the main change is to deal with Iris' petition. 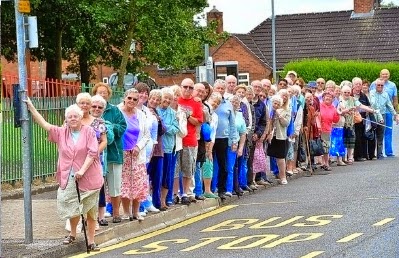 The pre-July route used to wiggle a bit at Talke ...

... and, as the (totally unstaged, of course) press picture shows, this upset Iris (with stick at the front of the queue). Journeys via this wiggle have been re-instated once an hour. 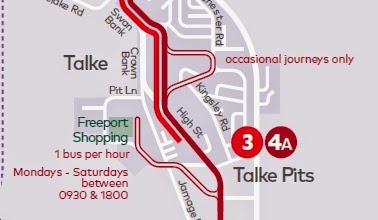 People Power rules OK! These hourly journeys call there between 1000 and 1500 approx and are shown as note "C" on the 4/4A table. 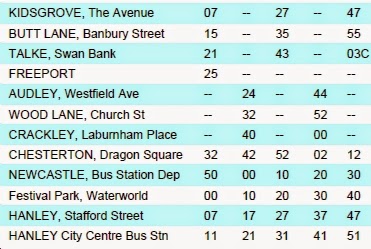 They do not appear at all on the 3 table despite the fact that 3s become 4As and vice versa  at Talke and the timetables overlap. This means that, if Iris looks for a 3 from, say, Tunstall, which will take her via Chester Road ...

... she will find nothing, nowt, zilch to help her. Putting the two tables together, masterminds who read fbb's blog can see that she wants the xx32 from Tunstall. It is all so easy if you spend most of your waking hours studying bus timetables. Note "C" on the 3 table, please, Mr First.

Aqua 5
This is an odd one. Formerly running via Abbey Hulton with part of the service extended to Baddeley Green ... 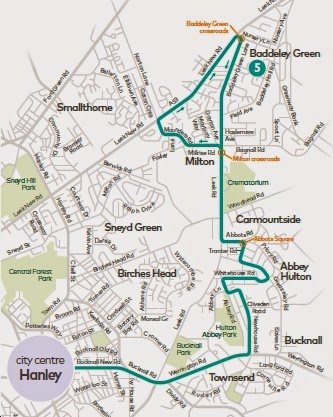 ... his has undergone two changes. The service has been split as shown in the map below. Apparently the good burghers of Baddeley Green didn't like going via Abbey Hulton and wanted their direct route via Leek Road back. This had been merged with the Abbey Hulton service in the July upheaval. 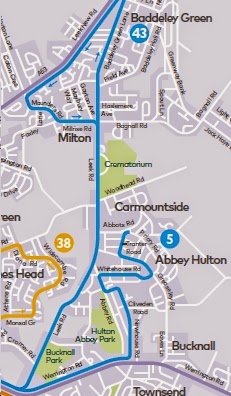 People Power rules OK!  Additionally, local information suggests that the linked routes did not work time-wise; with late running and thus unreliability. But, more mysteriously, it is no longer "Aqua" and has been rebranded and recoloured "Sky". 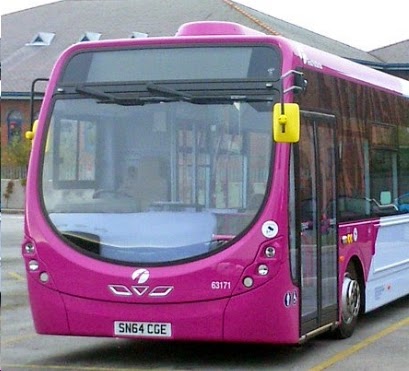 Things were confusing at Hanley. 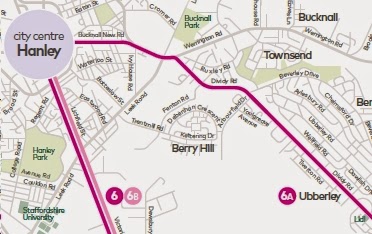 6 and 6B ran via Longton whilst the 6A ran via Dividy Road and Ubberley; lubberly jubberly (?). This seemed workable but didn't go down well with Hanley folk. So the 6A has reverted to its former number, namely 26. 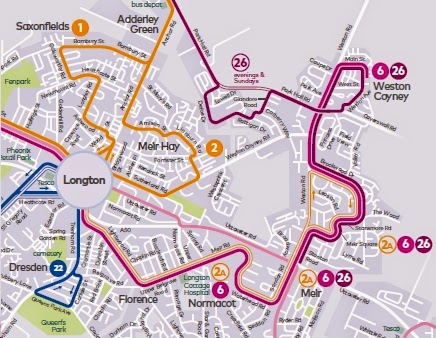 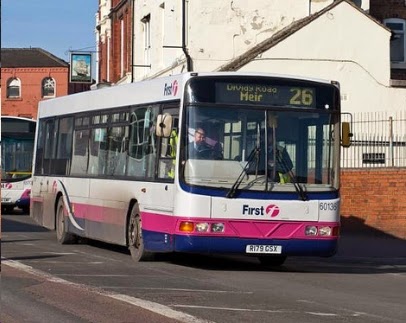 And, talking of service 6B (which we weren't) reminds fbb of another news item he spotted during his extensive researches. It concerns a bus stop near the slip road at Meir Park that led from the fast and furious A50 o the old A50 via Blythe Bridge, now the A521. This is Google Streetview's view of the street in 2011. 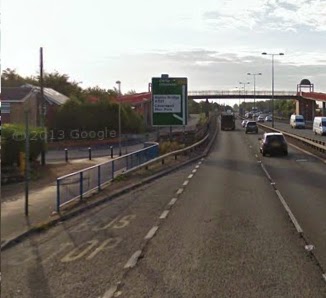 And this is the shiny new "BUS STOP" painted as part of the resurfacing work in 2012. 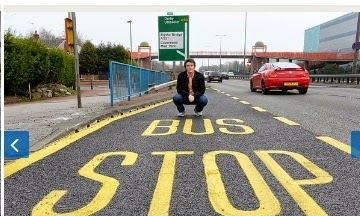 Sadly buses stopped stopping there ten years previously. The stop was deemed to be too dangerous. Indeed the notice to that effect was still in the frame when the pic above was taken. Well done chaps!

now we come to the 7s, 8s and 9s. Too much for one day; we'll have another go tomorrow!

Mrs fbb occasionally shops at the Co-op, ailing in Seaton as in many other localities. She was pleased to pick up a pack of frozen fish for a tasty evening meal. 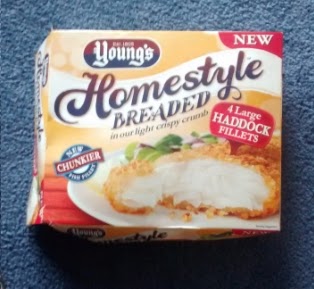 What made the purchase even more pertinent was a reduction from £4.59 ... 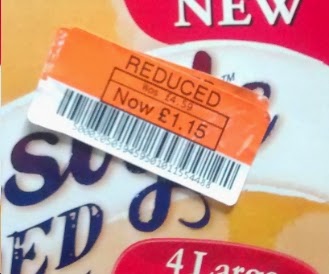 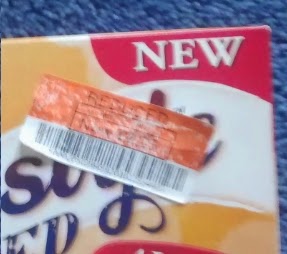 So what was; what is; what might be; the price of fish? Do we need an OFPoF?

The fish plus rosti and peas served with a home-made cheese sauce made a delightful evening meal. Cheap as chips fish!
------------------------------------------
Advent
Calendar
08
a song
However weak the science of the Old Testament, writers had no doubt that mankind's survival depended on a right relationship with God. Three times a year, Jews were required, if at all possible, to attend the Temple in Jerusalem. This would have been an utterly mind-blowing experience. The temple dominated Jerusalem and was approached by a long flight of steps. It was dressed in white stone and decorated with gold leaf. It was designed to evoke the magnificence of an Almighty God. 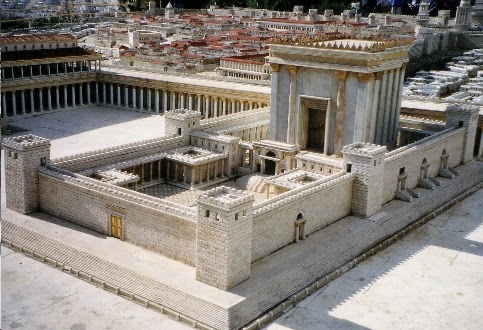 En route the pilgrims would sing songs; effectively the pop music of ancient Israel. Ancient Greek called these songs "psalmos", meaning "songs sung to a harp". Often they recongnised God's supremacy and mankind's inate inferiority. These words are from Psalm 8.

When I look at the sky, which you have made,
at the moon and the stars, which you set in their place;
what are human beings, that you think of them;
mere mortals, that you care for them?

But yet, says the song writer, humans are very special in the eyes of God.

Yet you made them a little lower only to yourself;
you crowned them with glory and honour.
You appointed them rulers over everything you made.

Right at the very back of the temple was a small perfectly square room. In it was the Ark (box) of the Covenant (ten commandments), a searched for by some cinematographic Raiders. 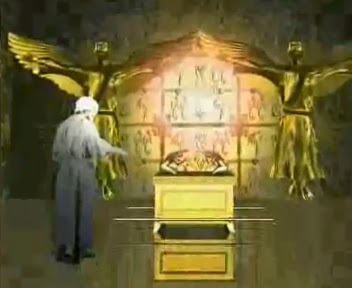 Only the top man, the big cheese, the High Priest, was allowed in, and only on one day each year. His mission was to talk to God direct and plead for the forgiveness of peoples' sins. (The three letter word again.)

You would need forgiveness, wouldn't you, to have a meaningful relationship with an utterly good God. God could never permit anything, or anyone, to enter into his perfect world unless they were completely clean.

Thanks to Christmas it may be possible.

Next bus blog : Tuesday 9th December
Posted by fatbusbloke at 02:00