Visiting churches is a passion for many explorers but not usually for fbb. So often these once-thriving beacons of community life are promoted as museum pieces. Frankly that's what the fbb's expected at Cullompton. But they were wrong. 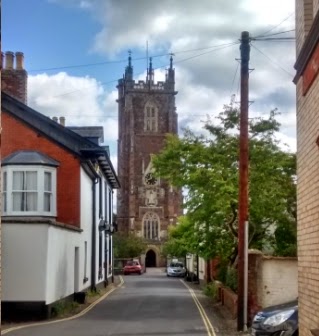 Oh, there was History; a gorgeous carved ceiling ... 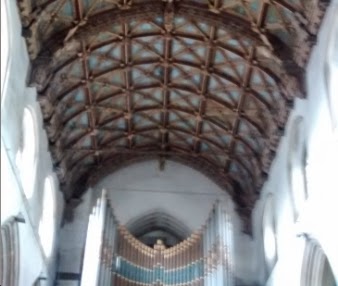 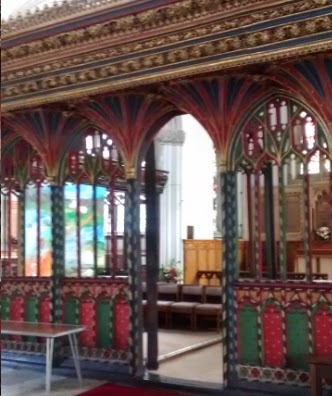 ... and an extremely rare "golgotha".

Cullompton Church is unique throughout England, and possibly throughout Christendom, in possessing to the present day the original carved wooden base of the medieval rood screen. It is sometimes called the "Golgotha" because it is carved with skulls and rocks and crossbones. During the Middle Ages, it was a common practice to erect a carved representation of the crucifixion scene at Golgotha above the stone or wooden screen, which divided the chancel from the nave in most ancient churches. As the congregation passed through the screen to take communion, this visual aid would remind then of the sacrificial death of Jesus, a life offered to the forgiveness of their sins and commemorated in the bread and wine. 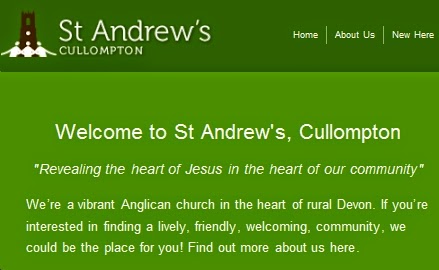 But st Andrews is thriving with three services on Sundays. 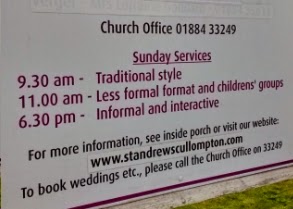 It all looked like a wonderful and heartening mix of "ancient and modern"! 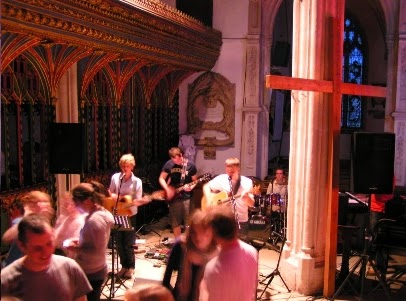 But back to the earthly from the spiritual. Stagecoach buses trundled by every 20 minutes in each direction ... 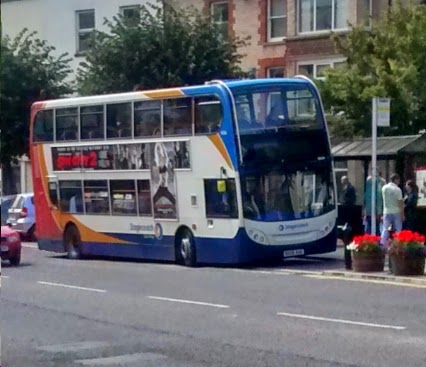 ... with a mixture of newer and older deckers. 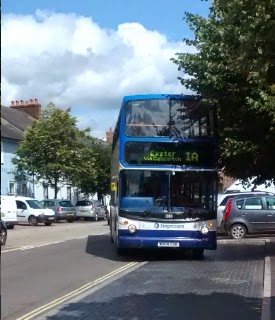 Devon County's bus stop infromation was in the form of proper timetable extracts, not the more usual and less useful departure lists. 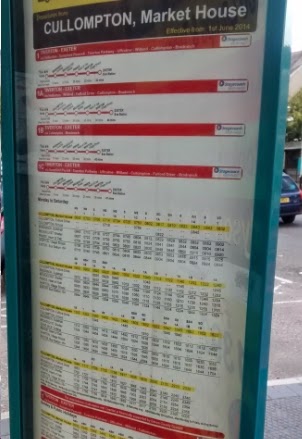 It would have been even more useful to have a route map, especially in view of the multiple northbound destinations. Also passing by was the town service, operated on Devon County tender by Dartline. 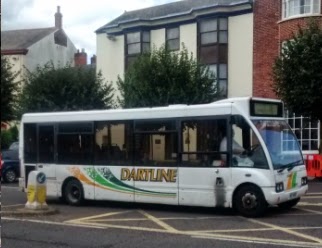 This service 350 offers seven journeys Monday to Friday and three on Saturday mornings ... 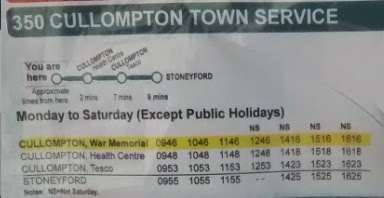 ... linking most of the town with the inevitable Tesco store (red dot, centre right). 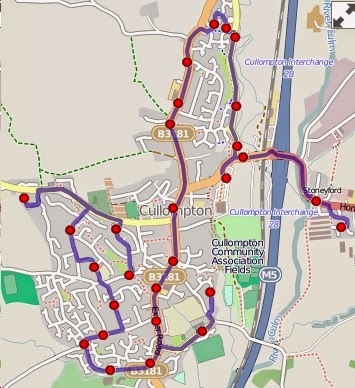 The journeys fbb observed did not seem to be replete with eager shoppers! 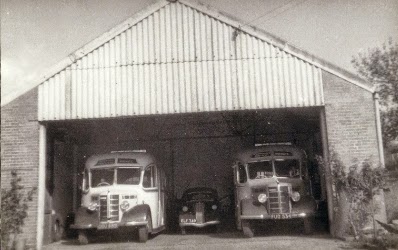 Redwoods Travel runs a wiggly round-the villages Thursdays only bus into Exeter (675) and Dartline (again) provide the Honiton circular (694). This is a delightful tour of picturesque and quaint Devon communities with one trip each way round the "circle" Mondays to Saturdays. 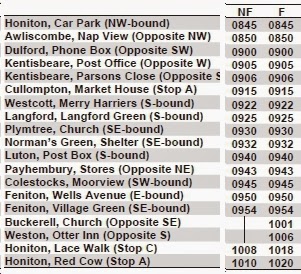 Cullompton even has a National Express service! The 0505 from Totnes via Torbay and Exeter creeps off the M5 at 0650 seven days a week, calling at The Weary Traveller (pick up ONLY) ... 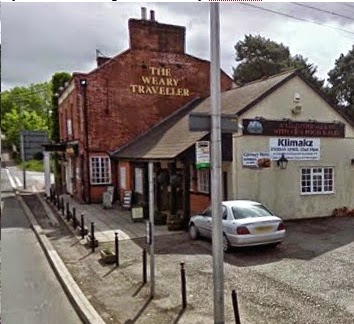 ... near the site of the former railway station, before nipping back smartly on to the M5 to serve Heathrow (1000) and London (1030). The return journey deposits you likewise at 2240 (set down ONLY).

On the whole a good selection of public transport, by today's declining standards, for a town with a population of  a little over 8,500. 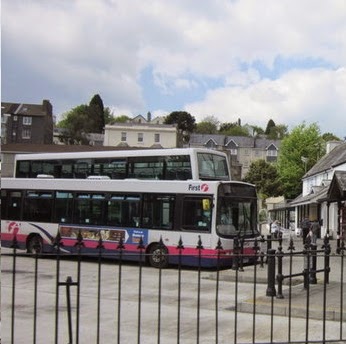 The Battle for Tavistock
Hard Times All-round?
First Bus, successors to Western National, have run the bus service between Plymouth and Tavistock with only a brief spurt of cpmpetition in the late 80s. Then along comes a more aggressive (more go-ahead?) Plymouth Citybus and starts Blue Flash 12 in direct competition. 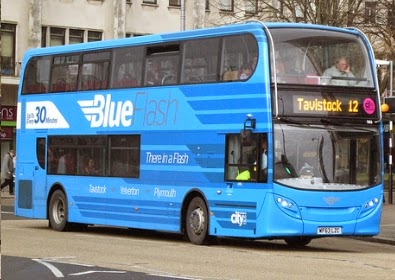 First has responded in various ways, but, until today, both companies were offering a 30 minute frequency. You must assume that neither company was making any money; as the old adage goes, "there's a living for one and a loss for two."

So from today the Blue Flash gets a bit less flashy. The Tavistock service is merged with the existing route 42 between Plymouth, Derriford Hospital and Tamerton Foliat ... 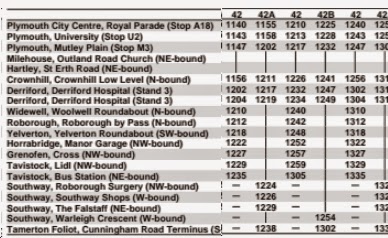 ... and theres a goodly bit of renumbering to confuse the passengers! 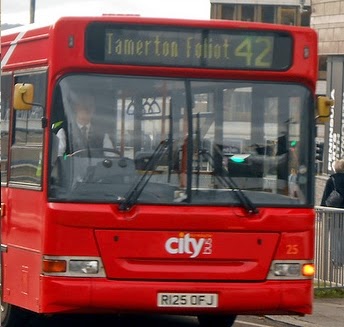 The Tavistock journeys on Mondays to Fridays are thus extensions of the buses that formed the short workings to the Hospital. A map might make it clearer ... 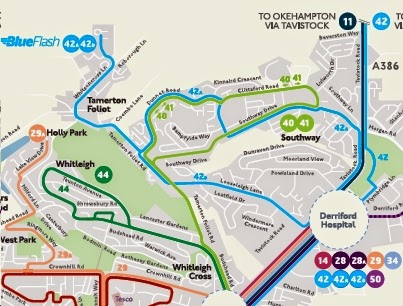 Diverted and slower buses, complex route numbers and different shaped buses? A good idea? Not really. An attempt to save a bit of cash on a route that's losing money? That's more like it!

No prizes for fbb's opinion.