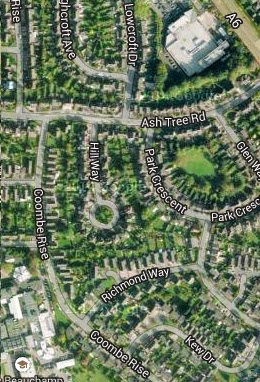 ... to the stop for the 31A, the "other half" of Arriva's disappointing Sapphire route to Oadby. 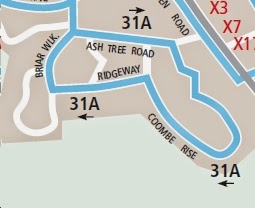 The stop is almost at the start of the loop, and a badly photographed departure list suggested that a bus was due at 1811.

But at least the stop confirmed that buses were going to Leicester; except, of course, the 1825 which would be terminating at Coombe Rise.


Always ready to reap the benefits of modern technology, your IT-wise reporter also asked his mobile phone. The clever phone reminded fbb that this call would cost money, yet another example of the bus industry charging people to find out what they sell. Crazy! But (steps back in amazement) back came the answer in a few fleeting seconds.

Now we have no buses at all to Leicester and the expected departure from fbb's stop has now changed from 1811 (bus top non-timetable) to 1818. Good thing it wasn't raining as there was no seat and no shelter. 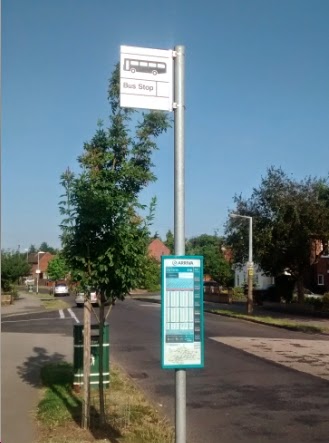 There were shelters further round the loop indicating that those in charge of such things assume that, as this stop is just before "the terminus", no-one will be boarding. Maybe so, maybe not; but at least a bench would have been nice on a hot day.

But good news for the bus drivers. What looks like a second stop on a streetlamp pole (beyond the cars in the above picture) is a route direction indicator, presumably put up when the route started. 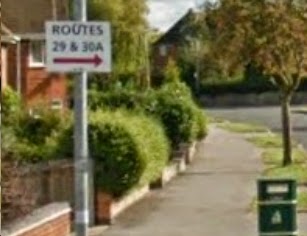 Of course you realised; this is Leicestershire and services 29 and 30A simply don't exist! (Well, not at Oadby. fbb will use the 29 to Coalville, NOT via Oadby, later.) And there was fbb, thinking that a further outbreak of competition had occurred?

Just to complete the information survey, fbb checked with the on-line timetable.

His bus was the 1820 from the Coombe Rise terminus (half way round the loop) and 1811 (printed time on the stop) was sensible, allowing for early arrival in the loop. 1818 (mobile) was wholly inaccurate as fbb guesses that the vast majority of 31As would have left the Turner Rise stop much earlier that 2 minutes before their scheduled terminus departure. Memo; don't expect buses to turn up at the times given on the Mobile.

Of course it's Traveline data again as confirmed by the departure lists on Transport Defunct researched later. They, too, take you no further that Oadby, K, now revealed as ... 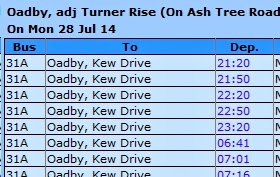 ... "Kew Drive" a location which does not appear on any printed map, printed timetable or bus stop publicity. How very helpful. Loopy loops data yet again.

As might be expected at 1820 on a Wednesday, inward loadings were sparse. Arrival was at "Charles Street", which turned out to be the Haymarket bus station. But as the stop was on the road outside, and literally hundreds of yards feet from the stands (see picture below!) ... 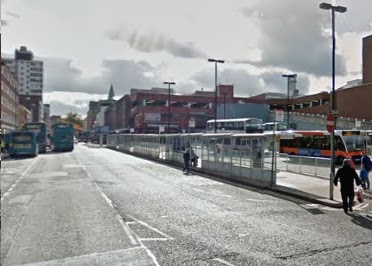 ... "the system" has to give it a different name. Unhelpful. Departures from Leicester (also Charles Street, see buses above on the left) might better be labelled as "Opp Haymarket bus station", then uneducated visitors like fbb will be able to plan their interchanges without panic or confusion.

It's all a bit "casual" for a route that "sparkles". Sadly, from fbb's experience, Leicester's Sapphire didn't.

There are plans for a new Haymarket bus station but, since an announcement to that effect a year or so ago, there has been a thunderous silence; although the Council approved the plans back in January.
There was little time to enjoy the delights of the old Haymarket as fbb tottered sweatily to St Margarets for his next journey. An out-of-town Travelodge was to be where the old man would rest his weary head for the night (of which more in tomorrow's blog.) 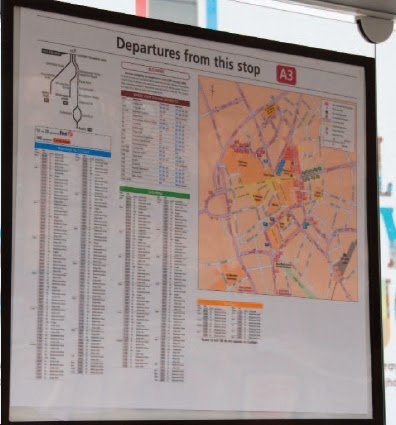 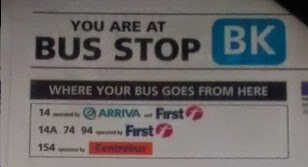 ... to remind himself of information in the city centre. Doug Rose of FWT has written (Buses Magazine) effusively of the revamp of all central Leicester bus stop labels undertaken not that long ago. Stops were all lettered, departure lists (of course, no timetables!) were provided and, at busy locations, a full index of what leaves from where plus map. All very impressive. 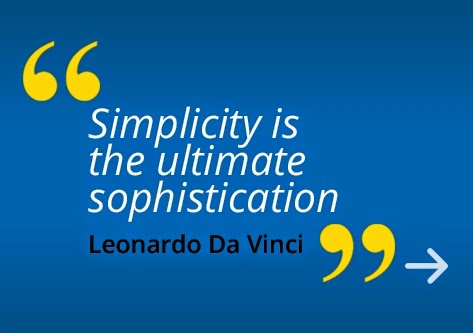 Doug is fascinated by human reasoning of graphic information in all its manifestations: forms, maps, signs, instructions, book layouts – all of them. He is just as interested in the logic (or commonly the lack of it) of the designers who create this sort of material, that is everywhere in our lives, as he is in the way users then try to make sense of it.

Doug is one of the good guys, but fbb does wonder how helpful his "simplification" might be. Here is the "route diagram" from stop BK. 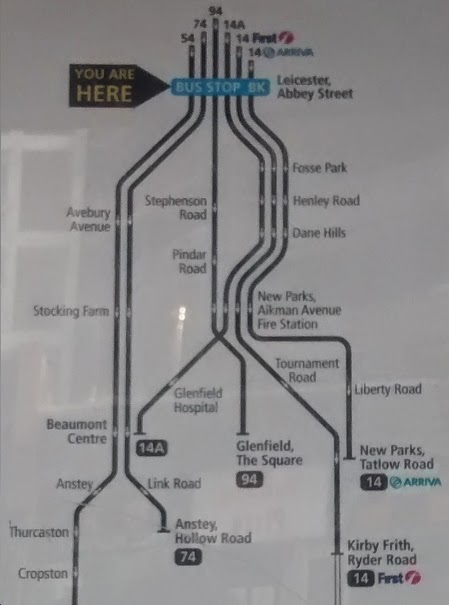 The line bottom left is zooming off to Loughborough. Compare this with reality. Here are 14s and 94 via New Parks ... 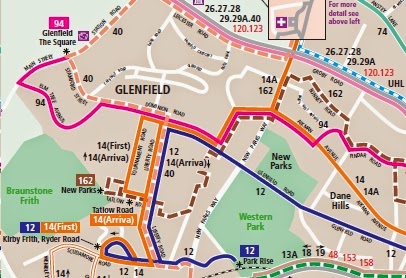 ... and the exceedingly keen amongst our readers will discern that the squiggles do not quite capture the intricacies of First's 14 versus that of Arriva.

And here the full selection via Beaumont Leys. 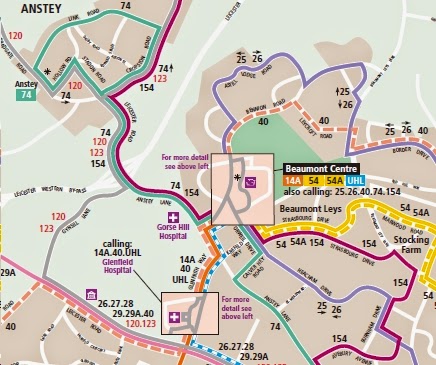 Is FWT's simplification a step too far? Would it be better for all (not just regular passengers) if the maps showed all routes in the destination area with those from a particular stop highlighted? Would "simplified geographical" be more helpful than a highly stylised but totally non-geographical collection of intersecting squiggles? And monochrome squiggles, to boot.

fbb cannot resist concluding this blog with a bit of nostalgia. The 94 (top map), now a First Bus route, was operated until 2005 by the much missed Hylton and Dawson. 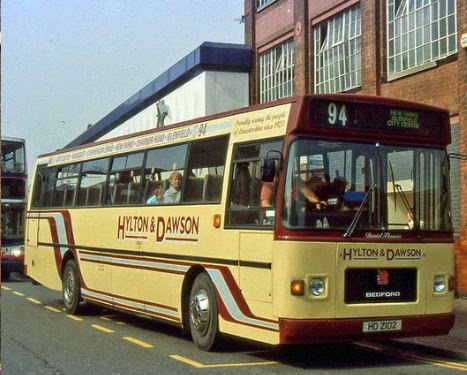 
Next bus blog : Saturday 2nd August
Posted by fatbusbloke at 02:00