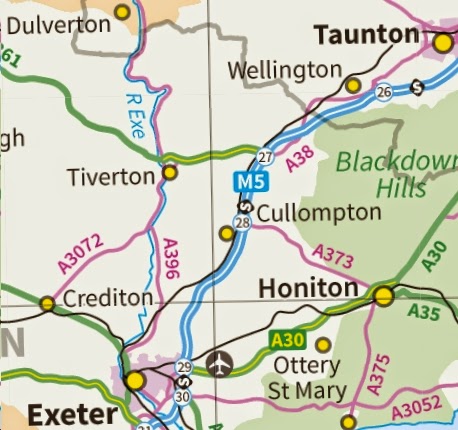 Cullompton (promounced Clumpton) is a town and civil parish in the district of Mid Devon and the county of Devon, England, locally known as Cully. It is 13 miles miles north-north-east off Exeter and lies on the River Culm.

The earliest evidence of occupation is from the Roman period; there was a fort on the hill above the town and occupation in the current town centre. Columtune was mentioned in Alfred the Great's will. In the past the town's economy had a large component of wool and cloth manufacture, then later leather working and paper manufacture.

A large proportion of town's inhabitants are commuters but there is still some local manufacturing, including flour and paper mills. It has a monthly farmers' market held on the second Saturday of every month which is the oldest event of its kind in the South West. It is home to two grade I listed buildings: the fifteenth-century St Andrew's parish church (of which more later) and the seventeenth-century house known as The Walronds. 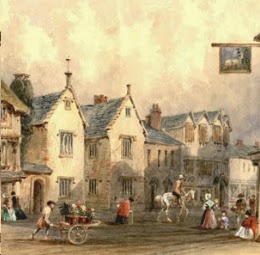 This superb building has been recently refurbished and returned to its original cream stucco finish. 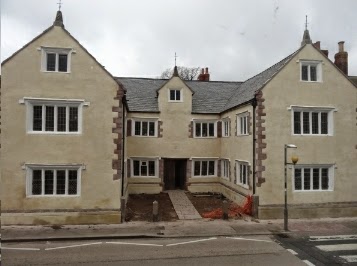 All that now remains to be done is to return to pedestrian crossing to its 17th century heritage style complete with Dickensian crossing sweeper! 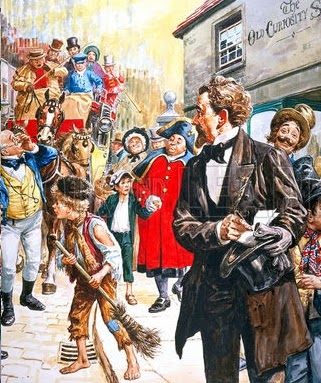 In all there are seven grade II* listed buildings and ninety grade II listed buildings in the parish. Like so many former bustling market towns, Cullompton suffers from the disease of commuter-land with several scruffy shops and a good number of closed establishments. fbb and Mrs visited on a Friday and, as usual, the passing traffic was busy but there was plenty of room in the town's car park and tables a-plenty in the cafes.

Traditionally buses have been provided by Devon General ... 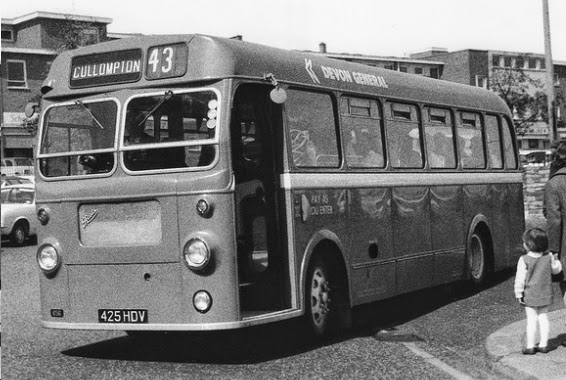 ... and or Western/Southern National. Successors to the former, Stagecoach, have plied the main road from Exeter since privatisation. In Great Britain Bus Timetable days the 54 ... 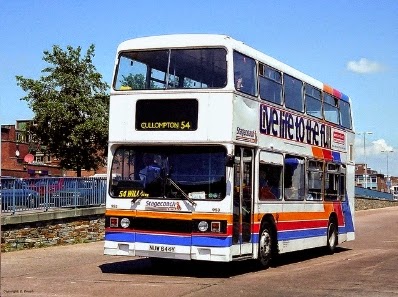 ... ran from Exeter to Cullompton and DevonBus (tendered) 373 formed the link via Willand and Uffculme to Tiverton. 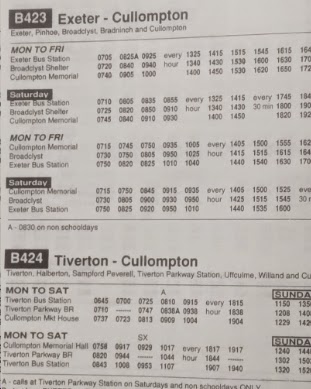 Over the last few years the Exeter company has improved andre-organised groups of routes into min-networks, one of which was initially branded as Culm Valley Connect and numbered 1 (etc). 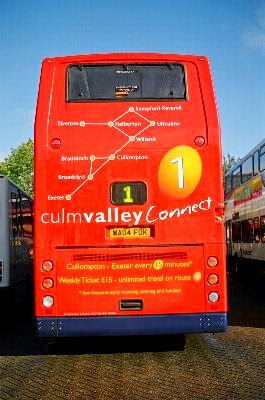 A later development (in 2012) caused some ire (and a feeble petition) when Stagecoach routed all buses via Bradninch.

We the undersigned passengers of the Culm Valley connect bus service (1, 1A, 1B) buses deplore the changes and cuts to the service to be implemented on 2nd April 2012 and ask Stagecoach South West to reconsider them. This particularly affects people commuting to work and students going to school/college.

• the loss of the direct service to Exeter with all buses going via Bradninch;

• the extra time added to journey times between Exeter and Cullompton,

• the six double decker buses an hour trying to go through the narrow and steep roads of Bradninch which neither us or the residents of Bradninch want; 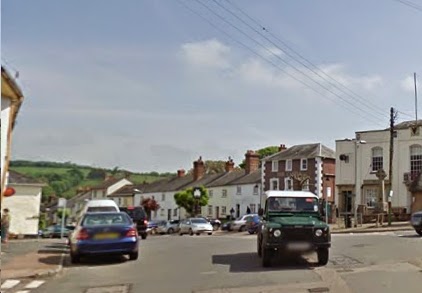 • the loss of the service running down Langlands road in Cullompton.

To be as fair as possible, a stretch of the High Street (behind the Streetview noddy car as above) is narrow, but hardly dangerously so. The on-line petition attracted 17 signatures (!) and the only change was that buses continued to run via Langland Road every hour. But soon the branding began do disappear from the buses ... 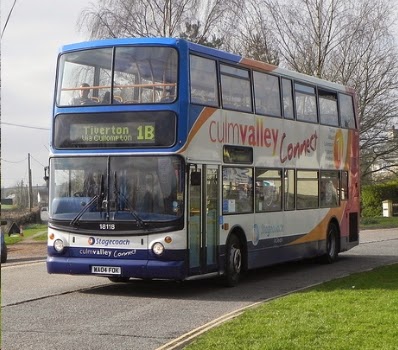 ... and there is now little to show that this particular brand ever existed. fbb spotted one solitary bus stop on the outskirts of Willand which still carried the route's logo. Unable to stop and snap, the best  picture is hyper-fuzzy from Streetview! 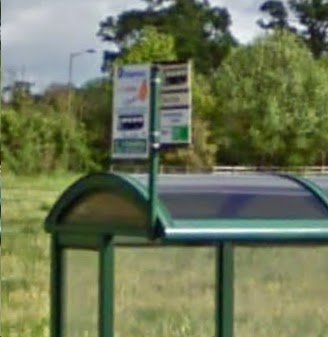 The core service is every 20 minutes to Willand with two buses continuing, via different routes, to Tiverton. 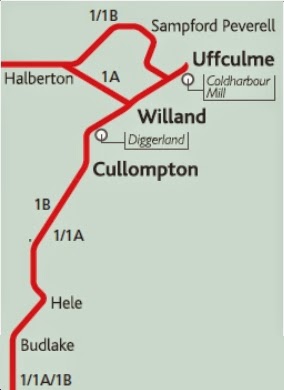 The timetable is potentially straight forward ... 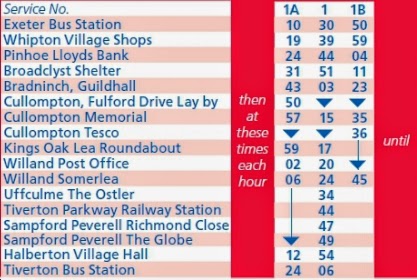 ... on Saturdays and during the middle part of the day Mondays to Fridays, but at school times ... 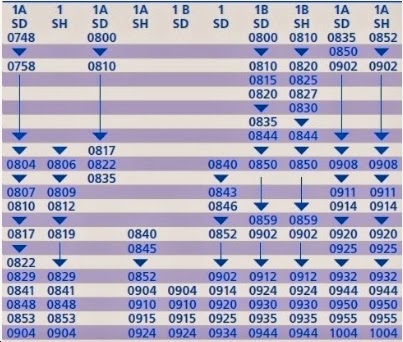 One other fuzzy bus stop photo is somewhat out-of-date. Again in Willand, look closely, screw your eyes up and use a little imagination. 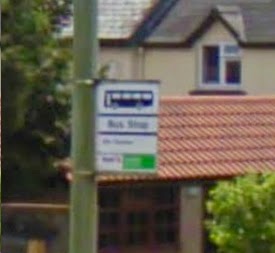 On the bottom of this flag, next to the "DevonBus" logo in green, is the operator's logo. It is First Bus whose through service between Taunton, Tiverton and Exeter was withdrawn in February 2012. 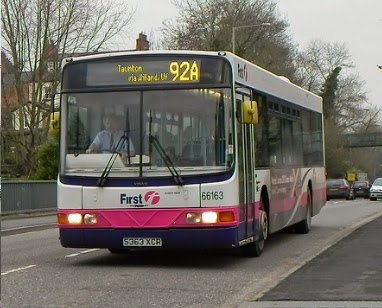 The 92 was first cut back to Tiverton only, then reduced from a hourly service to just 3 or 4 journeys Monday to Saturday and integrated with the Taunton to Wellington service 22. 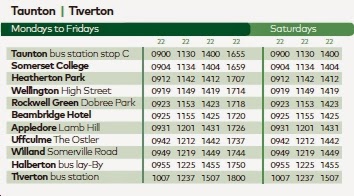 Merely a pale shadow of its former self. The present operator prefers to keep its First Bus credentials hidden under the Buses of Somerset cunning disguise. So the stop is misleading, especially if the approaching bus is green, not barbie in hue. 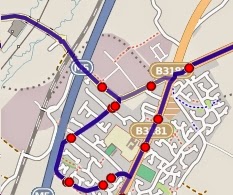 Buses of Somerset loops via Willand

Most of the other stops in Willand were anonymous! 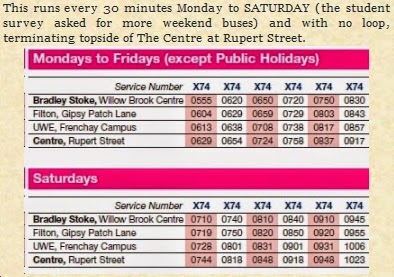 ... and will, from this weekend, be running direct from UWE via the M32. This was once subsidised Wessex Red 13 (the Bradley Stoke bit) ... 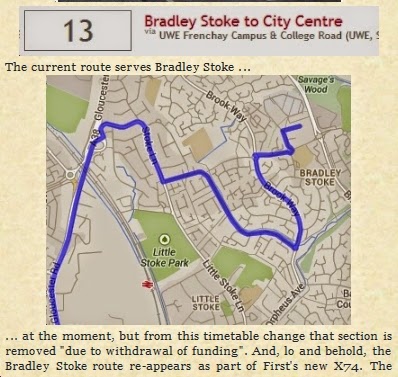 ... and it looks as if First are providing it commercially.

So they are having a cut price introductory sale offer:- 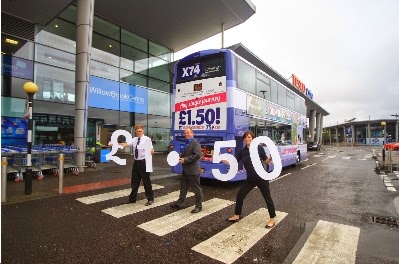