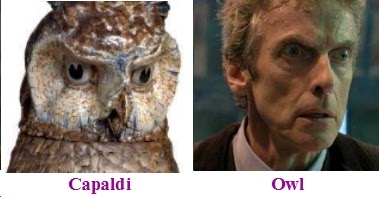 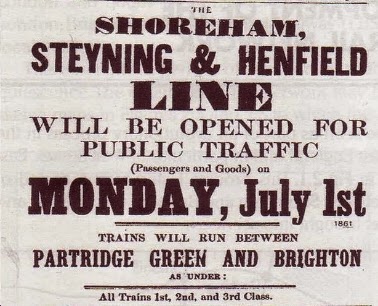 What became the South Eastern and Chatham Railway [Idiot! See comment and apology below!] had reached Shoreham-by-Sea in 1840 and was pressing onwards westwards to an eventual terminus at Portsmouth. The line north via Steyning had a very long and convoluted gestation, too complex to cover in a simple blog. As we see from the poster above, the line opened initially to Partridge Green ...

... and was later extended to Horsham. The initial service was three trains each way, seven days a week. 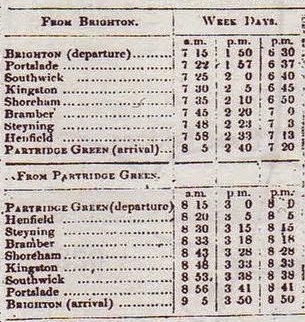 There was much celebration as usual, plus effusive reports in the local press. 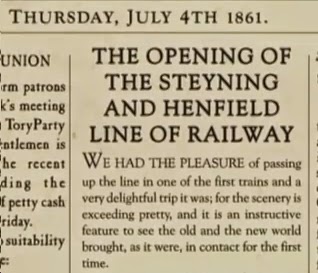 The line soon settled down to its bucolic obscurity but it never achieved "main line" status as originally intended and only carried passengers to and from these local stations. We can "survey" the line and see what remains. Fortunately most of its length is now "The Downs Link", a long distance cycle route and footpath. 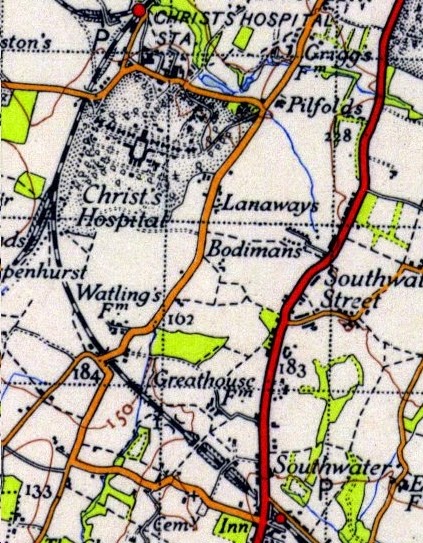 The first stop south was Southwater where the modern A27 (red road on old map above) now by-passes the village; but the bridge over the former line is still there. 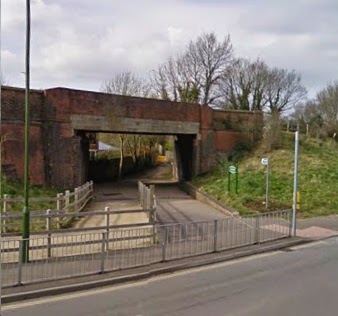 There is no sign of the station on the opposite side of what was the A27 ... 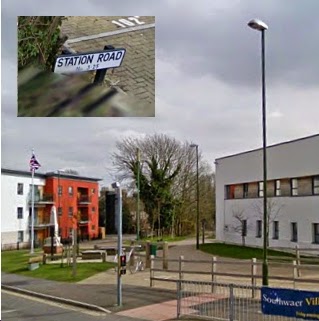 ... although, round the back of the Medical Centre (right) there is still a Station Road. 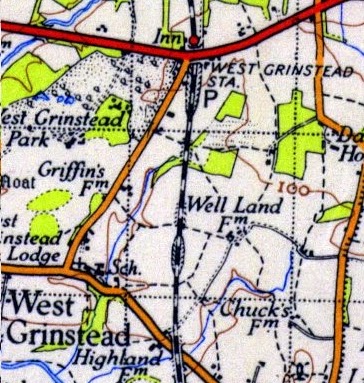 ... was West Grinstead, located as we come to expect, some distance from the village. But the station still exists, just, in that a railway carriage parked in the fromer goods yard serves as an information centre for the footpath. 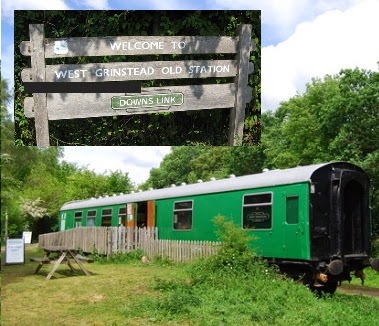 The platforms are in place and obvious. 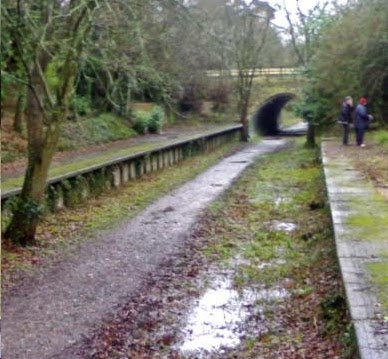 The main road has been re-aligned and the underbridge has been replaced by a less authentic structure. 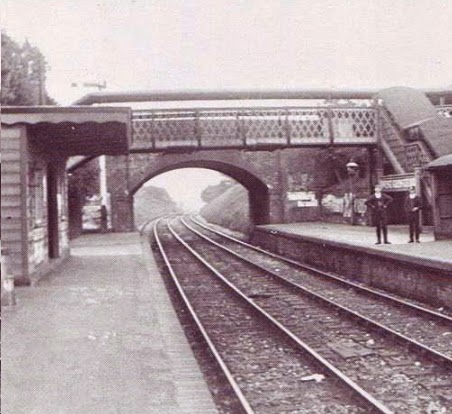 Nevertheless a happy reminder of olden, quieter and, for the railway itself, profoundly uneconomic times!

The splendid overbridge south west of the village still stands and carries the Downs Link footpath over the B2135. 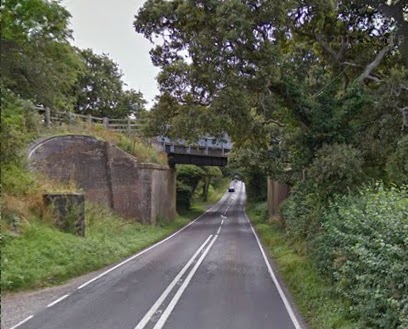 We continue southbound to Partridge Green, the line's terminus in July 1861. 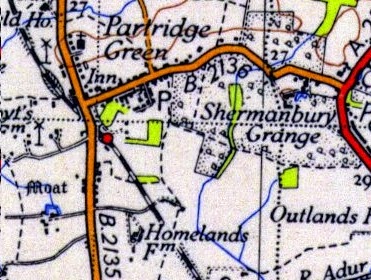 Here a small industrial estate has obliterated the station, once typical of hundreds of branch line stops throughout the UK. 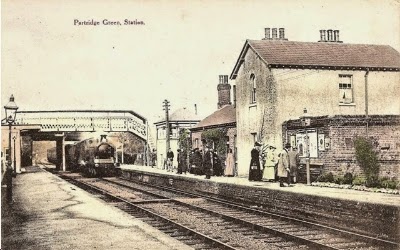 In 1978 the local paper snapped a fair held around the closed station building ... 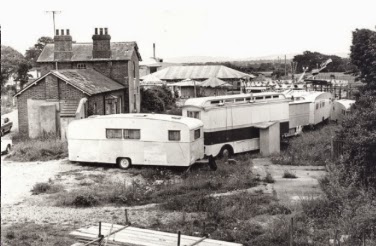 ... but all Streetview reveals today is a long wall which formed the parapet of the railway under-bridge, again on the B2135. 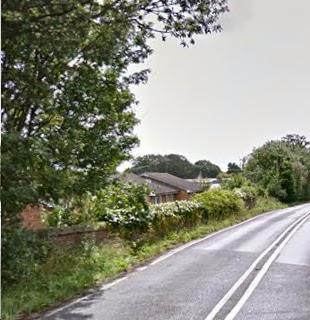 We will continue our historic rail journey tomorrow but, in the meantime, we have a quick glimpse at today's bus services. Southwater is much enlarged and a busy almost-suburb of Horsham. Metrobus runs local service 98 every 15 minutes ... 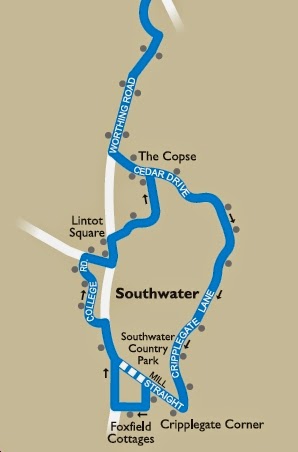 ... and provdes a link to Horsham and Crawley northbound ... 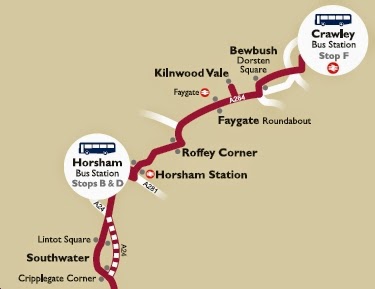 ... and Worthing southbound every hour by route 23. 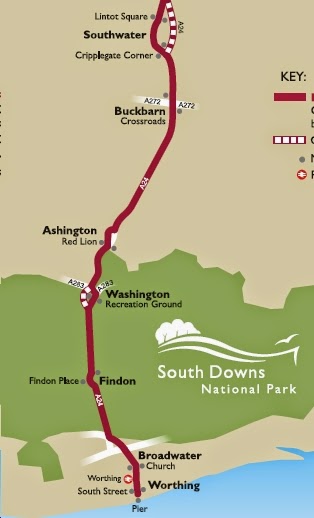 Even little Partridge Green has an hourly service to Brighton and Horsham! 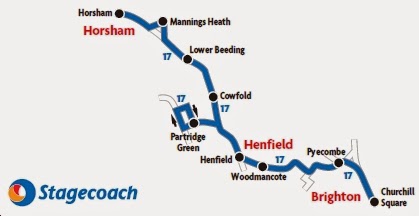 Which leaves the even-littler West Grinstead. Sadly this community only has a Wednesday "market day" bus (106) ... 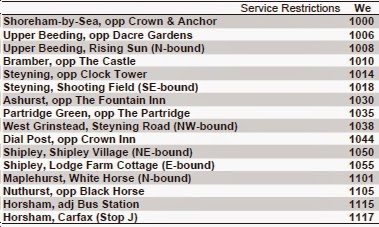 ... but it does call at both the village and the site of the station; the dotted line is the former railway, now the footpath. 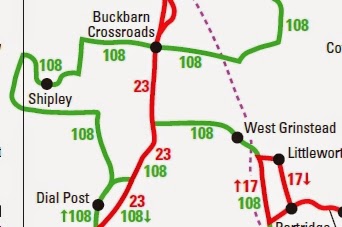 Nostalgia leads us to mourn the passing of the typical UK branch line; and some may argue that, with the increased population at most of the communities along the line of the Adur Valley branch, there may be an argument for re-instatement. As we shall see, such an idea is now impossible because of the roads and buildings that encroach, nay obscure completely, the former trackbed. And would a revived railway be able to provide the level of service that is available today, albeit on the humble bus?


Next bus/rail bog : Monday 25th August
Posted by fatbusbloke at 02:00