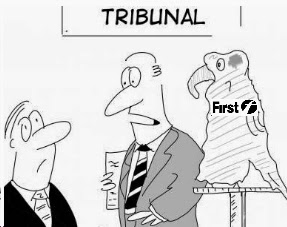 Contrary to popular opinion,
my client is in very good health! 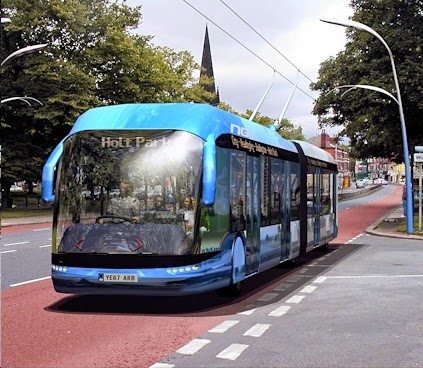 West Yorkshire PTE and/or Leeds City Council wanted a lovely shiny tram network like that in neighbouring Sheffield. Of course they wanted the Government to pay for it! But the Govrnment piggy pank was empty so the project was cancelled. The Leeds people had a sulk and said, "If we can't have shiny new trams, then we'll have shiny new trolleybi instead."

But not everyone was happy. Least happy was First Bus who are challenging the whole caboodle at a Public Enquiry. In essence the company says that it could improve many more of the bus routes in Leeds for less than the trolleybus would cost. First also opines that the emphasis given to the trolleybus route will be detrimental to its Leeds network, leading to the withdrawal of several marginal services. Better bus is better value for the populace (and better business for First!). 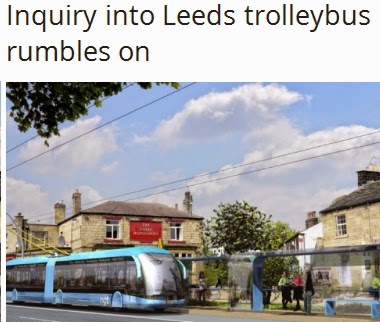 The public inquiry into the controversial £250m trolleybus scheme has been extended due to the resolve of those opposing it. Paul Robinson reports in the Yorkshire Evening Post.

Head down Wellington Street from Leeds city centre and take a left just before the Crowne Plaza hotel. 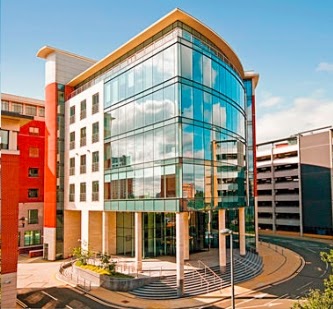 Follow the road round and when you reach the office building at 2 Wellington Place, it’s up 10 steps and into its smartly-furnished foyer. Make for the lift and hit the button for the fifth floor. Then left out of the lift, through the double doors - push, not pull - and on your right you’ll find a room. The room isn’t much to shout about. Bigger than your average classroom but far from cavernous, it’s the kind of unassuming meeting space familiar to office workers across Leeds.

But it is here, on the fifth floor of 2 Wellington Place, in a room without windows, where the future course of transport in the city is quietly being charted. The room is the venue for the public inquiry that will decide the fate of the hugely-controversial Leeds trolleybus scheme.

On one side are the £250m New Generation Transport (NGT) project’s co-promoters, Leeds City Council and the recently-formed West Yorkshire Combined Authority (WYCA), which includes what was Metro, the county’s passenger transport authority.

Lining up against them is a wide range of objectors, from transport giant and local bus operator First to community groups such as the Friends of Woodhouse Moor. 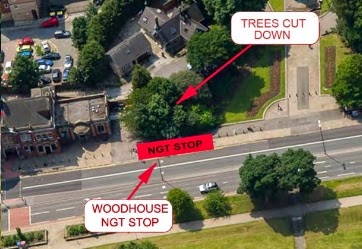 So today, the next salvo is fired in the Great Debate. Press release issued earlier this week.

First West Yorkshire, which serves over 100m customer journeys a year, is launching a consultation on its proposal for a ‘New Bus for West Yorkshire’, (NBfWY)

The three part proposal includes introducing the new bus, introducing smart card ticketing similar to the Oyster card used in London and working with our partners to unblock hold-ups by tackling congestion hot spots where changes to road layouts and traffic signals could reduce delays.

The combination of multi entry and exit points on the new bus and touch card ticketing would greatly speed up boarding and exiting so cutting journey times. The buses will have the most technologically advanced hybrid, fuel efficient engines which will reduce CO2 emissions by nearly half over standard diesel buses.

As First’s Head of Commercial, Paul Turner explains: We want to test the reaction of people across West Yorkshire to the package of measures we are proposing which we believe could radically transform public transport in West Yorkshire. Over the coming weeks we will be consulting with politicians, businesses and the public to gain their views.” 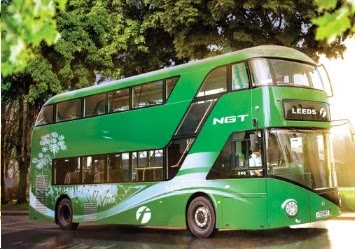 When this was mooted tentatively some time ago, a photoshop mock-up was provided. But now they have painted one of the real live Bulbous Boris Beasts in a mucky green colour! 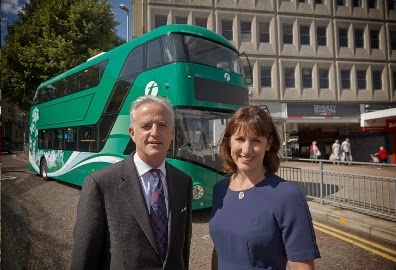 And the bloke on the left is Tim O'Toole, mega chief of the whole of First Group. Big Guns indeed. Slightly less big (or bigger, depending on your political point of view!) is the delectable Rachel. Rachel Jane Reeves (born 13 February 1979) is a British economist and a Labour Party politician. She has been the Member of Parliament for Leeds West since 2010. Reeves is also the Shadow Secretary of State for Work and Pensions, or was at the time of this Wikipedia sourced note .

Opinions on the Borismaster are divided, but the engineers, those who have to make them go each day, are reportedly all privately of the view that the bus us a disaster. They cost a small fortune to buy, nay a large fortune; they are less reliable that "normal" buses and they cost another small fortune to run. When London has finished with them, it looks as if no other bus operator will touch them with the proverbial barge pole. 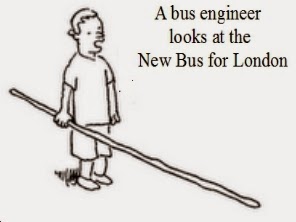 So we are in one huge political power game.

The seasoned view is that the trolley bus promoters are losing the PR battle at the tribunal; but that isn't always a measure of the ultimate result. One thing is for certain, First Leeds are shoving massive resources into getting their own way.

Interesting times ahead on the Headingley Road!

But if you are going to run these horrors in Leeds, First, at least paint them in a more appropriate livery! 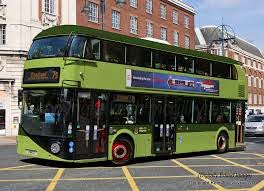 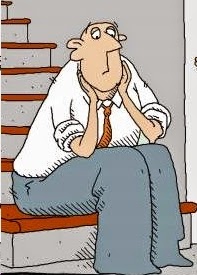 Of course our correspondent is right. 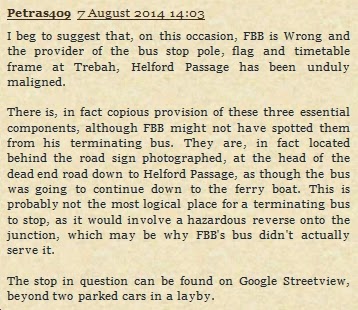 How could fbb have possibly missed it ...