Let's See What is Built on the Island of Sylt [2]

The nearest fbb has come to Sylt is a lesson at Carisbrooke High School, Newport, Isle of Wight! In the dying embers of a very non-illustrious career, the chubby one worked as a supply teacher. At Carisbrooke, due to a convoluted series of misunderstandings, fbb was accepted as a modern languages specialist! Joke! French was OK ("A" level grade B), German was last "done" for "O" level in 1959 (C grade pass), Italian was failed at "O" level in 1960 (One year course, too short). 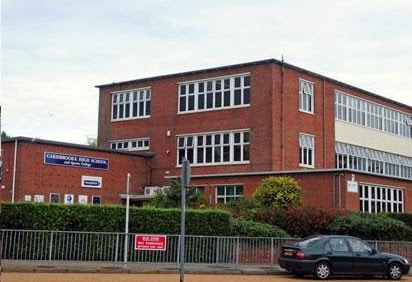 Cover for a year 9 Italian class involved (either by chance or, more likely, Divine intervention!) two lessons on bus routes in Malaga; success assured! GCSE German was a bit harder, but the set passage was about teenagers discussing their holiday plans; a holiday on the Island of Helgoland (English "Heligoland" as in Bight), not far from Sylt. A fond memory is reading (and explaining) to the year 10 class this juicy German sentence uttered by one of the teens outlining the progamme of the evening disco at the camp site. Klaus explained that he was not a great lover of "Das Heavy-Metal"

It turns you brain into (literally) wobble pudding, i.e. blancmange. Never, since "my postilion had been struck by lightning" has there been such a useful phrase to accompany the linguistically-challenged tourists as they travel to Sylt! 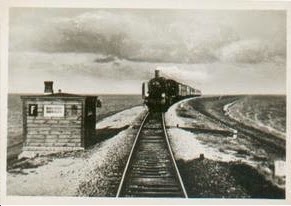 Some accounts suggest that the first 1927 line was only usable at low tides. There is (there always is!) a superb web site recording the building and opening of the causeway and its line linking mainland north Germany to the Island. But it's not in English. Bearing in mind fbb's confession of limited German language skills, what follows is offered as a noble attempt, rather than a fully worked translation. ... and a great deal of "sandspulung"; pumping sand and shingle from the shallows to make the embankment. 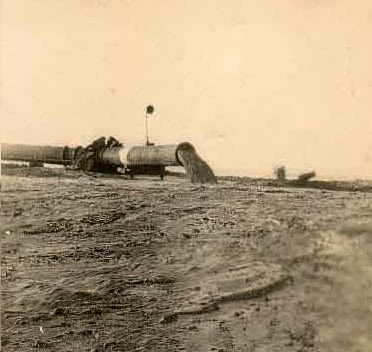 This shot shows a building worker beside the (substantial) bank and, in the distance, one of the (narrow gauge?) trains used during construction. 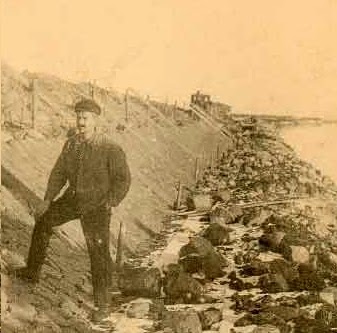 Eventually all was completed and the obligatory grand celebration was held; complete with historic parade, brass bands and universal jollity. 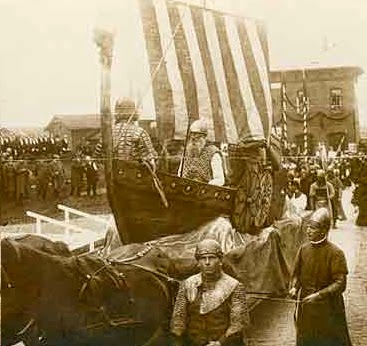 ... the President; known historically as a simple "Hindenburg" (thankfully)! Yet another fine example of Teutonic moustacherie.

Hindenburg retired for the second time in 1919, but returned to public life in 1925 to be elected as the second President of Germany He personally despised Hitler, condescendingly referring to him as that "Bohemian corporal", confusing (deliberately or not) Hitler's birthplace of Braunau, Austria, with Braunau in Bohemia. Hitler repeatedly and forcefully pressured Hindenburg to appoint him as Chancellor; Hindenburg repeatedly refused Hitler's demand. He dissolved the parliament twice in 1932 and finally appointed Hitler Chancellor in January 1933.

The rest, as they say, is history. He died on 2 August 1934 at the age of 87 and the causeway is named after him. Here he is on the opening day, looking right proper in his bright topper. 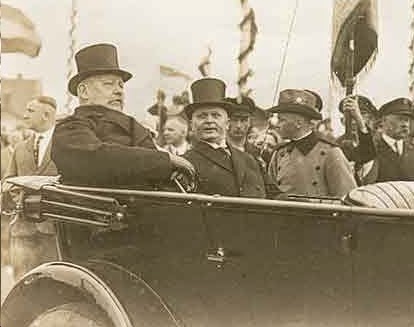 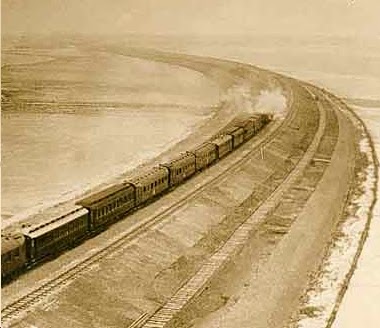 ... and the train service over the 11km (7 mile) causeway soon led to the rapid development of Westerland and the other resorts.

So what happens now. 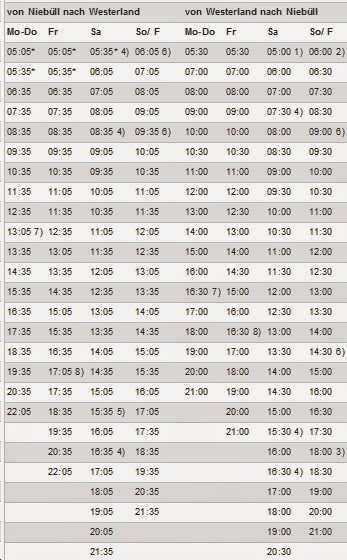 Car shuttles run every 30 minutes in Summer. The Niebüll terminal on the mainland has been modernised recently. 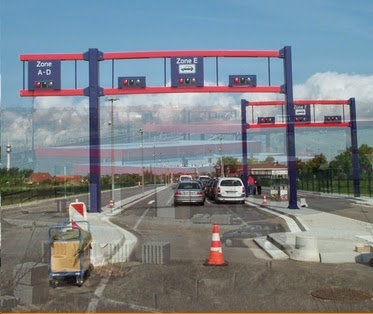 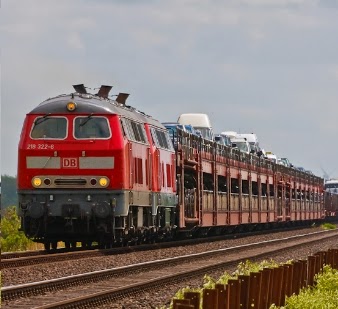 ... that are to be hauled by new Traxx locomotives.

But, in addition there's NOB.

That's Nord Ost-see Bahn which is a subsidiary of Veolia. Stopping trains run roughly hourly from Hamburg, supplemented by Inter-City expresses from as far afield as Dresden. 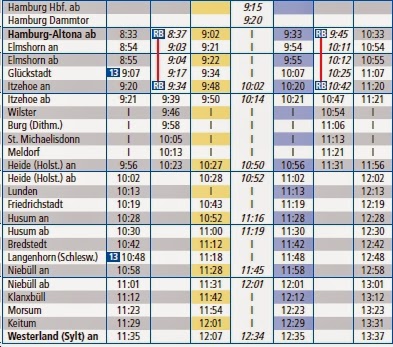 From Neibüll, the mainland "interchange", the journey takes just over 30 minutes ... 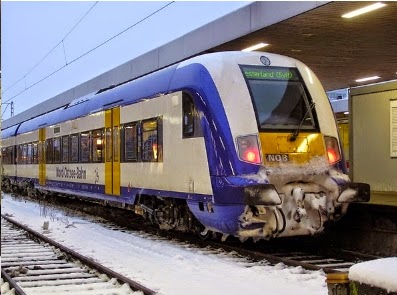 ... and soon the excited passenger arrives at Westerland station. 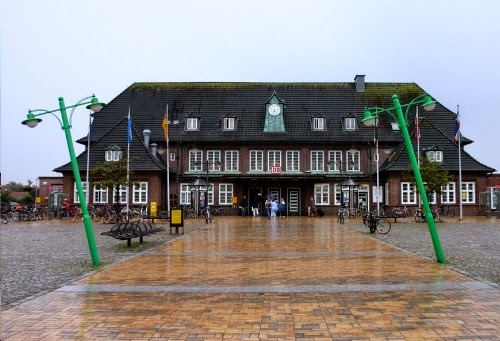 fbb thinks the leaning lampposts are a deliberate "decorative feature" but cannot be sure. They are green and lean at the same angle as the weird giant green sculptures. 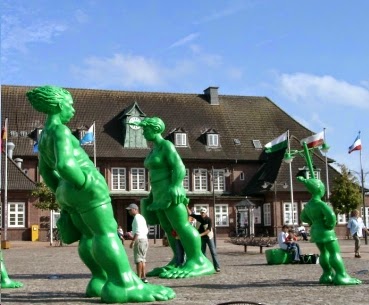 The station has been restored and upgraded to preserve the traditional and historic style of this beautiful building. 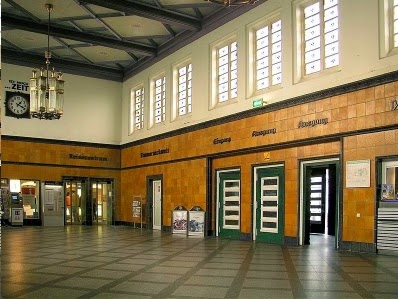 Choose your own German word to describe the magnificence of this island terminal.

And a heartfelt thanks to Google Translate for assisting fbb to overcome some of his linguistic limitations; possibly with limited accuracy!!

In case our readers wondered; there is no road link to Sylt. 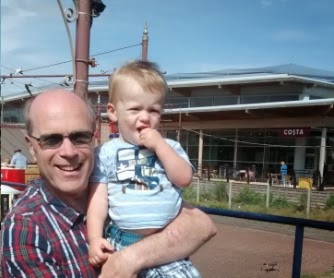