The story so far. 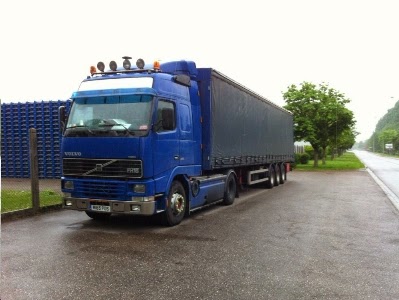 fbb's lorry-driving chum has been parked up on an industrial estate in Vesoul, Département de la Haute Saône, not far from the border with Switzerland (map, bottom right is the edge of Cuckoo Clock-land!). 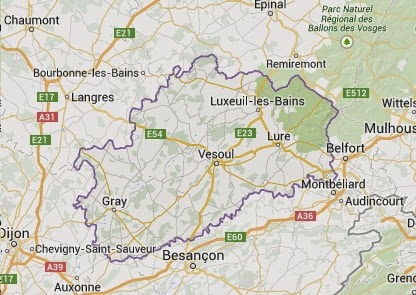 It is a bank holiday and nothing is running except a limited train service at the Pôle Multimodal. David's challenge to the chubby one is to find out about bus services  with nothing but a laptop and no safety net. Vesoul town services are easy ... 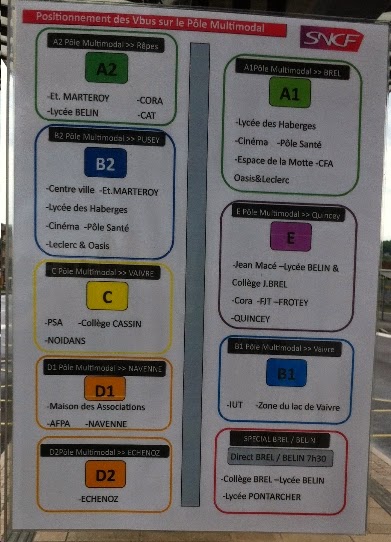 ... and well publicised. Rural and interurban routes are, unusually for France, difficult to sort out. There is a map of sorts ... 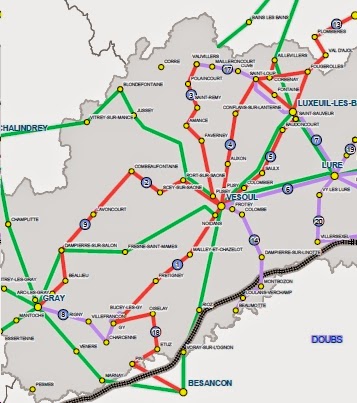 RED is uses for "Département" services, LILAC for school routes and GREEN, enigmatically, for "other" services. The TGV line is shown as a railway track in BLACK. The "red" routes are branded ... 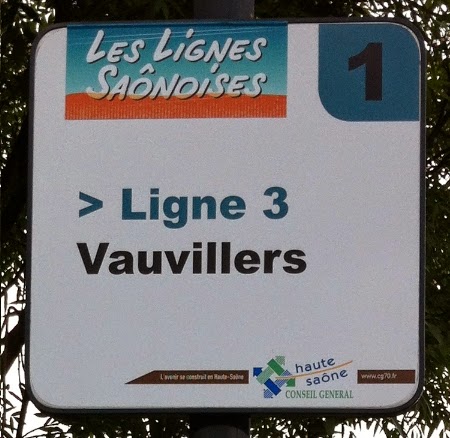 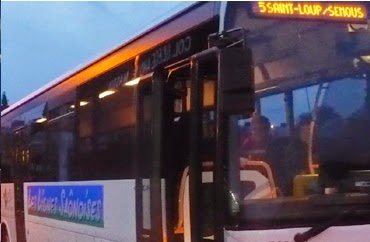 But it would appear that these services are individually tendered, not as a network as is usual elsewhere. There is a "Département" web site ... 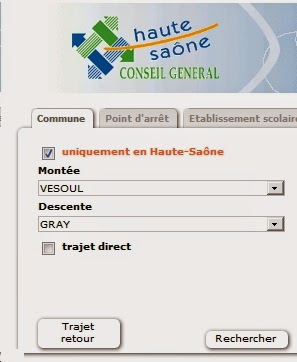 ... which is a mixture of journey planning and timetable information.

It delivers a selection of journey but fbb could not find any timetables. They do exist because this one ... 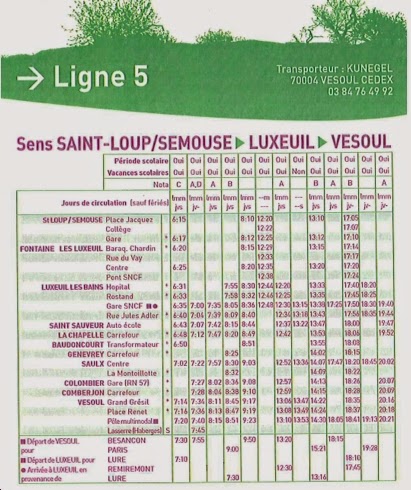 ... appears on a web site for a neighbouring town. So that's "red"; difficult, if not impossible, to unravel a complete timetable. We will ignore lilac, although access to the information is the same as above, and we will move on to the green routes.

It was through searching for pictures on Google Streetview that fbb came across his first clue. 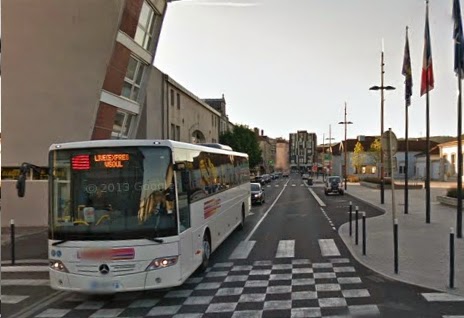 The operator is "Livéo" and there are on-line timreables for the four routes operated in the area, presumably commercially and thus not part of the Lignes Saônoises branding. This is the "Express" route to Besançon; this extract being the usual reduced school holiday service. 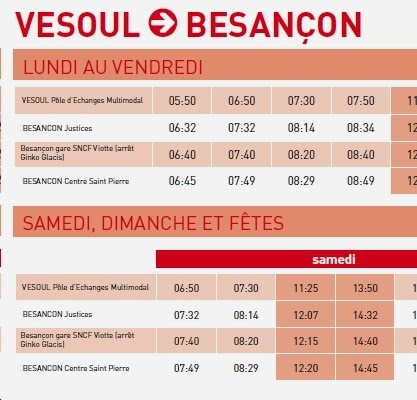 One more to go. On the web site that revealed the route 5 timetable page (above) was a coach service operated by SNCF; in other words a service that, possibly, replaced a rail route.

But we do have a timetable ... 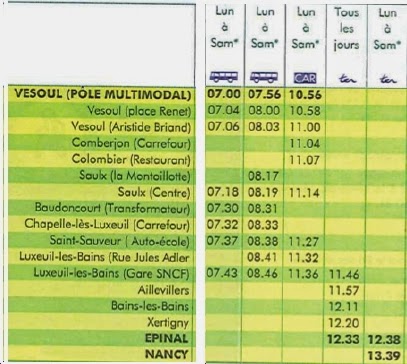 ... with bus (pictogram) and coach ("CAR") journeys included. Such bus/coach/train connections are shown on the railway map below in GREEN. Buses sponsored by the Département are in LIGHT BLUE. 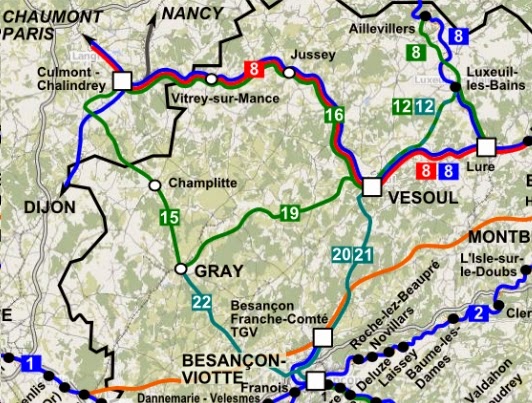 So bus service 5 and SNCF coach run to Luxeuil-les-Bains (top right) with a dashed LIGHT BLUE and GREEN line. "TER" (local) trains are BRIGHT BLUE, "intercity" services are RED and the TGV line is ORANGE.

Whereas fbb has enthused about ease of finding routes and timetable elsewhere in France, here in la Haute Saône things are confused, complicated and convoluted. Nowheere does there appear to be a complete picture. Which brings us back to Traveline. In most regions (but never in London where such trivial detail is secret) it is possible to search for timetables by locality and get a full set. In Vesoul it can't be done. 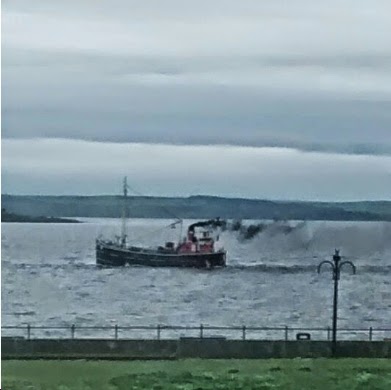 It was a toot from a Clyde "Puffer", a remnant of vast numbers of such vessels that carried goods of all sorts between the piers of the Clyde and its sea lochs. The Puffer was immortalised in Neil Munro's anti-hero skipper Para Handy and his disaster-ridden crew. 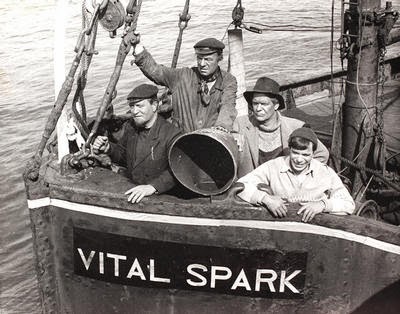 Two puffers remain in steam, and VIC32 is the vessel spotted by fbb passing Largs Pier. 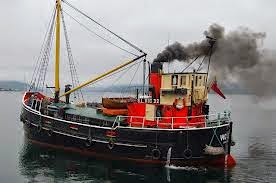