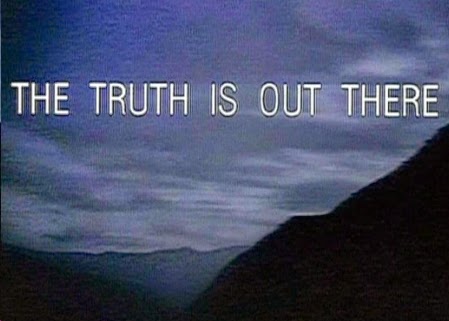 
A little less than two years ago, fbb was also in Largs and was bemoaning the paucity of public transport publicity. See "Languishing in Largs [Day 2]" (read again). The "Largs on Line" website has not changed since then ... 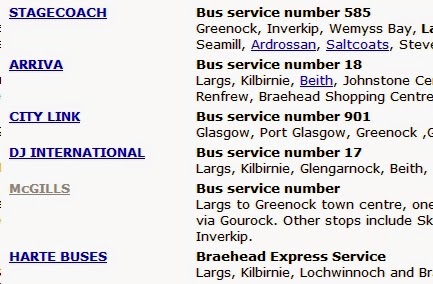 ... and is utterly wrong for everything except Stagecoach 585.

The Largs and Millport Tourist Information office is, apparently, more helpful with ... 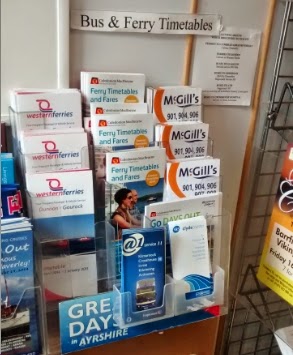 ... McGills booklets and Stagecoach 585 leaflets (the latter bottom right). Also there are current Caledonian MacBrayne booklets for the Largs to Cumbrae ferry. Stagecoach route A1 and Western Ferries do not serve Largs. fbb had pinched the last (photocopied) service 40 Largs Local "leaflet" before he took the piccy. So, possibly 8 out of 10.

Of the 576 Sunday evening service and the late-nite 578 there is no mention. 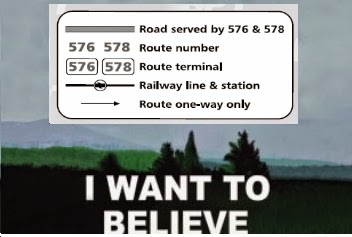 But, provided that the office is open, some information is available.

If the TiC isn't open the potential passenger, especially the internet-less of that ilk, is reliant on bus stop information or, as per yesterday's blog, accosting a passing and potentially knowledgeable "local"!

So back to that collection of panels snapped by fbb and blogged-upon yesterday. (read again) fbb has spent some considerable time in unravelling the "Truth" which is "Out There". 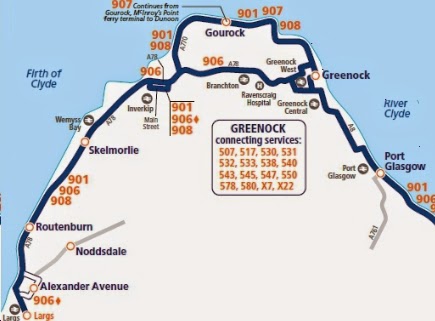 The half-hourly 906 runs from Largs to Inverkip, then inland via the A79 and the delightfully named Spango Valley to Greenock. 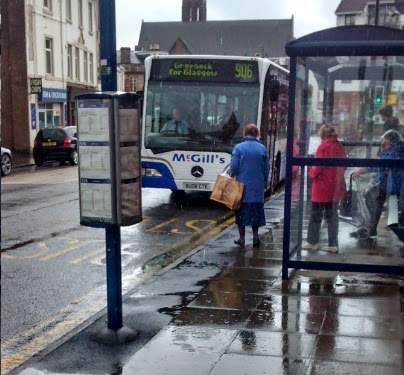 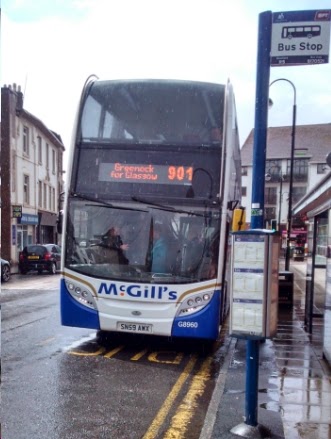 But a look at the McGills leaflet reveals two levels of wrong-ness for those confusing panels photographed yesterday. They are wrong in detail, probably out of date; fbb will look in detail at that erroneous detail in a later blog. But they are also immensely wrong in concept. 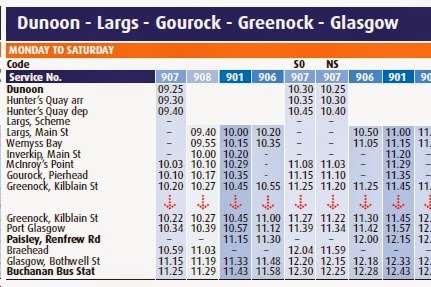 The dotty arrow refers to the dotty note ...

... invented by the dotty Department of Transport to cope with a dotty interpretation of a dotty EEC regulation all designed to send passengers either dotty or to their cars. But because there are two separate registrations and the computer is either thick or dotty (or programed by dotty techies?) the timetable panels come to a dotty end at Greenock leaving more (but not all) of the buses to run on to Glasgow in total secret.

Hence the dotty information given on the dotty electronic blinds.

Because of the DaFT "advised" split of the service, there is no apparent difference between a 901 and a 908 and, indeed, they are identical between Largs and Greenock. But the 908 runs via the Braehead shopping centre ... 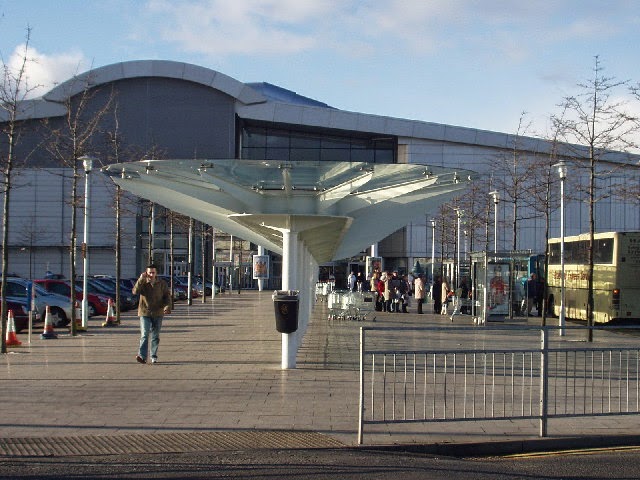 ... (deep joy!) instead of Paisley. McGills actually run hourly between Glasgow, Braehead and Gourock; the 908 continues to Largs whilst the alternate 907 extends to Dunoon - of which more in a later blog.

Any why, you may ask, are the routes numbered in the 900 series. Historically Scottish Citylink ran hourly 901s between Glasgow and Largs with a 906 variant and a 907 to Dunoon. 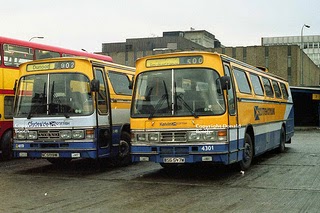 This baton eventually passed to McGills who kept the "traditional" numbers.

Compared with the above group, the 585 has had a decidedly uneventful life. Yonks ago the service was run by Clyde Coast of Saltcoats ... 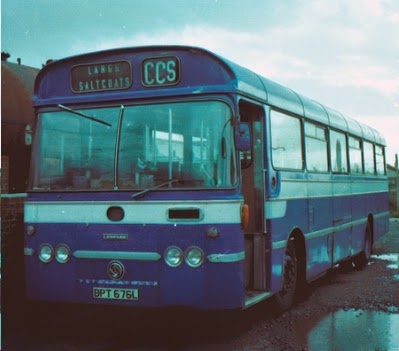 ... followed by a period pf loony competition. But it has settled down to a 30 minutes Stagecoach frequency between Ayr and Greenock using, mostly, branded buses. 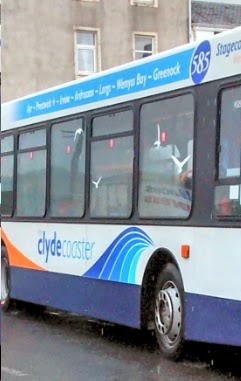 Between Largs and Greenock it follows the route of the 906 giving a generous four buses an hour over that section.

Most of that can be gleaned from printed material available locally. For the 576 and 578 you have to know the top secret password code "S : P : T". Strathclyde Passenger Transport is probably the worst of the former PTEs for bus leaflets; they only publish timetables for routes that receive subsidy through the tendering system. 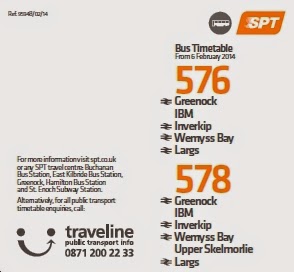 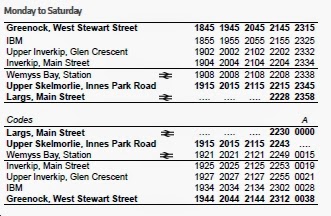 ... including the Largs "extensions" make no mention of the daytime frequent service run by McGills.

But, in a sense, that distinction matters not; as there are no SPT leaflets at Largs! But it might matter to Mr Barr as he wends his evening way back to his cottage.

There is one final 9xx from Largs. This is the hourly 904, successor to the traditional 17 ... 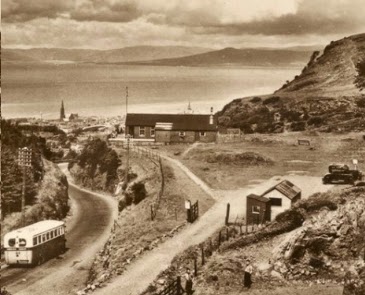 Haylie Brae looking back towards Largs

... and on to Paisley with a daytime Monday to Saturday hourly frequency. 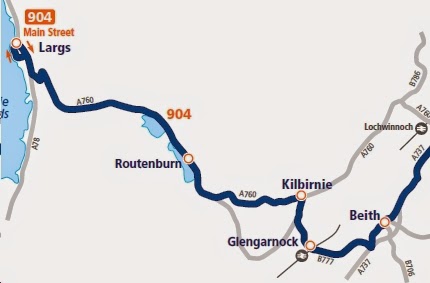 For the moment, at least, local route 40 remains a mystery!

Conclusion? You've heard it all before in fbb's blogs. Is this really the best we can do?

The out of date area area leaflets have gone. GOOD. 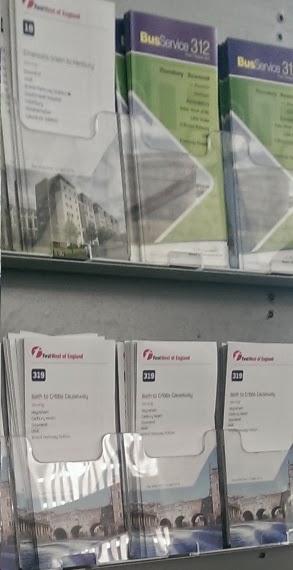 There are plenty of up-to-date 18s. GOOD.
They are joined by newcomers 319 a-plenty GOOD.
Non-First bus 312s appear GOOD 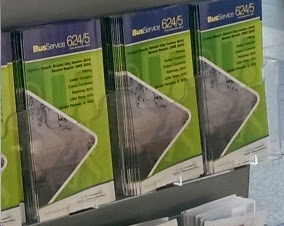 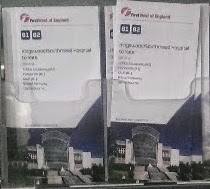