Dismal to Dunoon : Delightful or Depressing? [2]

The fbb's trip from Largs to Dunoon begins at the stop featured in last week's blogs. 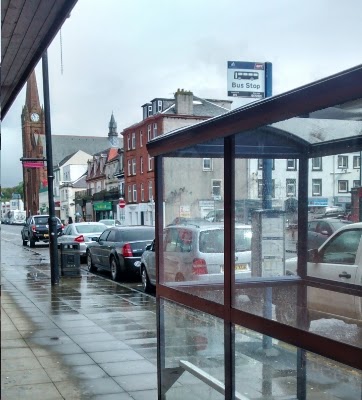 It is opposite the Viking chippy, promoted by a lifesize model of Brian Blessed ... 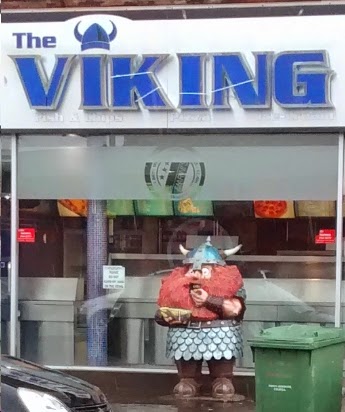 ... clearly designed to frighten children and those of nervous disposition. More-or-less on time the bus arrived. 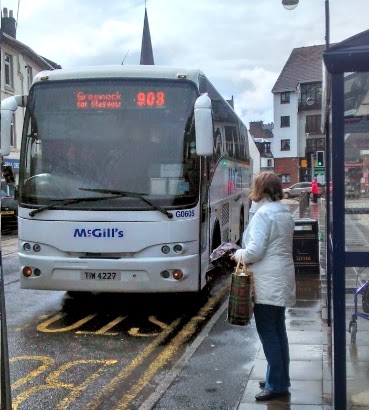 One thing that becomes obvious straight away is the huge benefit to we old crusties of free bus travel; and the shock of having to pay real money in Scotland. Return Largs to Gourock £8.20. OUCH. Each. OUCH. 66 minutes running time in total. It's only £6 return by train (with Senior discount) but, sadly, takes 1 hour and 34 minutes (change at Paisley, just off map centre right) for the single journey, nearly 3 times the length of the bus ride. 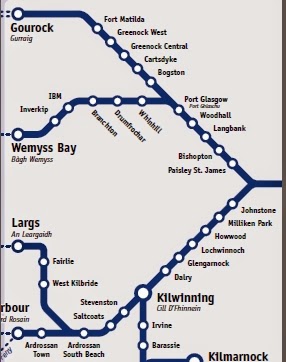 At Gourock here's a theoretical 10 minutes to make the connection between bus and boat; but what electronic systems don't tell you is that its a fair old trek from bus stop on the main road, across the station car park, through the booking hall and then along a long covered walkway ... 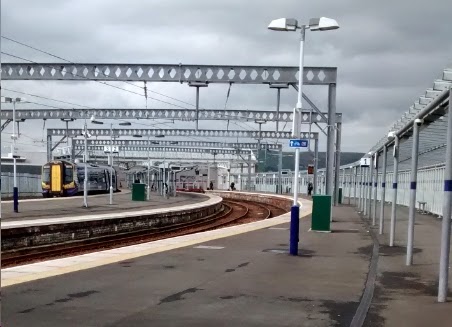 ... past the offices of Caledonian MacBrayne ... 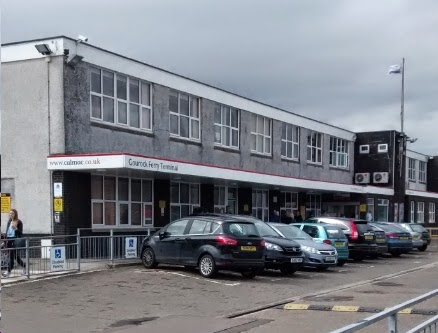 ... and along further to the old car ferry terminal. How the mighty are fallen. The Argyll Ferry boats embark and disembark via the car ferry linkspan. 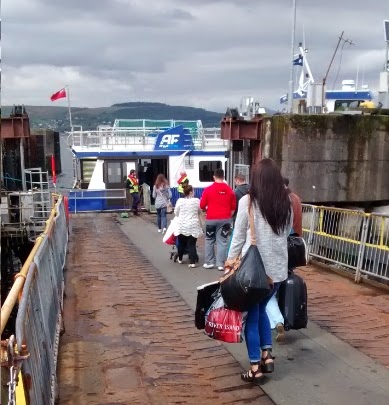 And off we go, saying our farewell to a Gourock terminal that isn't even a shadow of its former self. 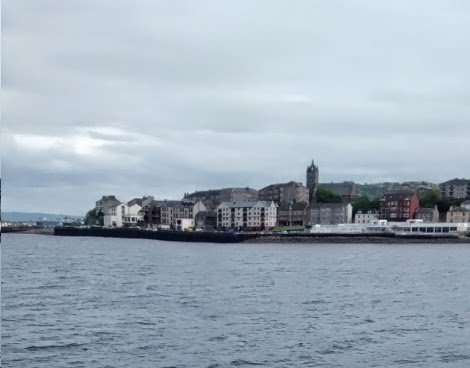 It is a sniggering joke by comparison; but such is progress. The boat is equipped with a hot drinks machine and a snack vending similar; and that summarises the facilities. 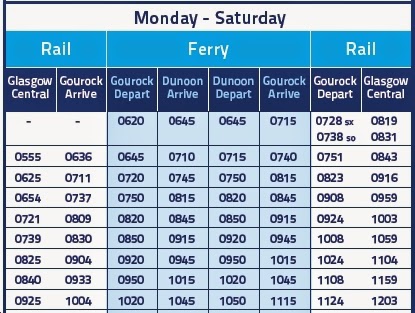 To add insult to injury, the timetable printed in the Calmac booklet is wrong. That's because one of the boats is having its annual MOT and refit, so the one boat runs hourly throughout the day. Normally, as we see above, the boats run half hourly morning and later afternoon and early evening but hourly during the middle of the day. By pure fluke the fbb's had scheduled their trip on the revised hourly service. 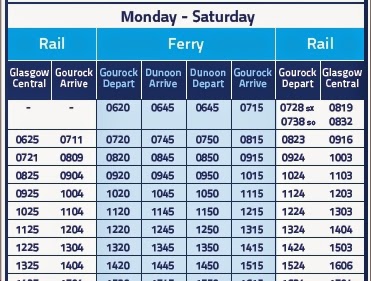 As we strike out for Dunoon, our route (is that the right word?) crosses that of the Western Ferries car carrying service. 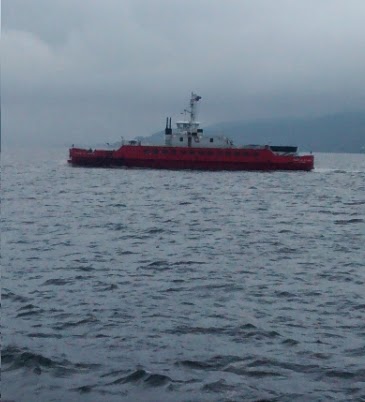 So before we dock at Dunoon let's enjoy a video of a crossing made the "real" way in 1982. Note that cars have been end loaded at Gourock, but will exit via a side loading ramp on to the original pier at Dunoon.
A linkspan was added at Dunoon in 2005 seeing barely six years service.

And if you were wondering why the little passenger boats don't sail from time to time, here are a few stills from a video of  travel on the present Western Ferries service to enjoy! 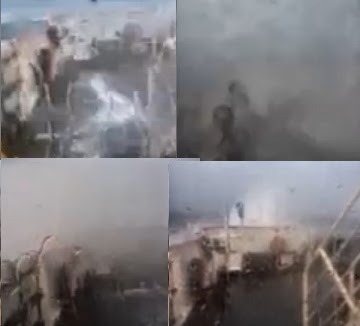 fbb did not embed the actual video because the language of the cameraman was a tad on the, er, florid side as the vessel was buffeted by the waves and wind. One phrase, however, was repeatable; "like a (expletives deleted) roller coaster!"

Fortunately fbb and Mrs had a calm crossing in damp drizzle. Upon arrival, Dunoon offered a pleasant welcome. 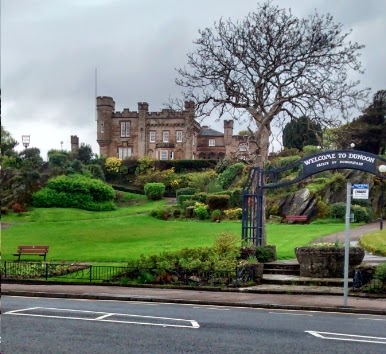 In the late 1960s, the town was the subject of a song entitled "Why Don't They Come Back to Dunoon?" by The Humblebums. This was a less-than-flattering ditty, mourning the declining tourist trade in the town. "There was a competition in a Glasgow newspaper," Billy Connolly once said, in a short interjection during a 1969 performance of the song. "The first prize was a week in Dunoon, and the second prize was a fortnight in Dunoon."

It would be fair to say that Dunoon has lost much of its former glory. This Streetview shot, dated 2010, shows at least three shops closed down. 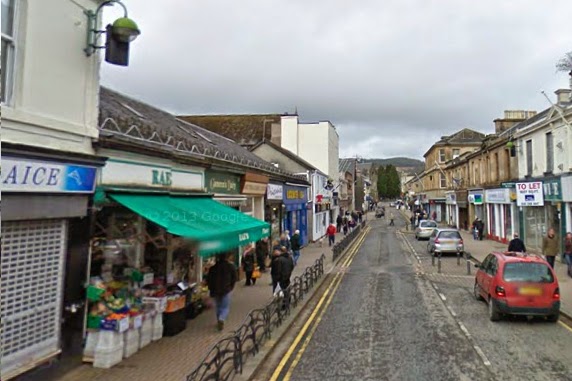 In 2014 there were many more abandoned businesses. So the fbb's satisfied their inner selves with a snack at the baker's ... 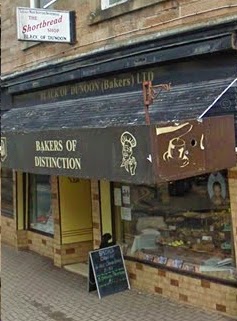 ... before trudging their weary and damp way back to Largs.

But there was time to check upon public transport information in the town; as will be explained on the morrow.

Next bus/ferry blog : Friday 23rd May
Posted by fatbusbloke at 02:00