Those who would follow fbb's blog with determination and dedication (don't they all?) will remember that the old fellow and his Mrs were having a week's holiday at Largs. Furthermore, on their first weekday, they had travelled by bus to Gourock, thence ferry to Dunoon and back, returning to Gourock at approx 1510. 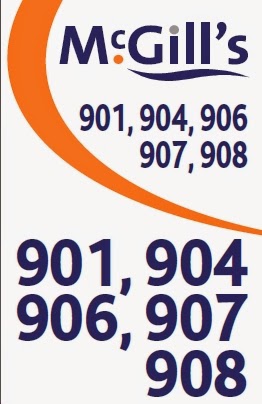 The McGill's leaflet, obtained from Largs Tourist Information Office earlier that day, revealed that the bus back was a service 901 at 1550. Plenty of time, thought fbb, to seek out public transport information, particularly bus timetables.

There was nothing at the railway ticket office ... 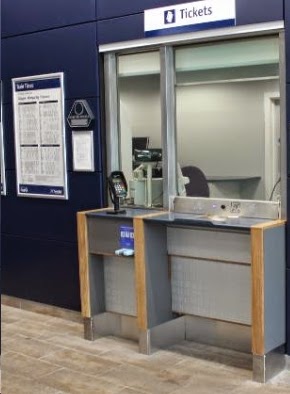 ... with a rather utilitarian waiting area round the corner ... 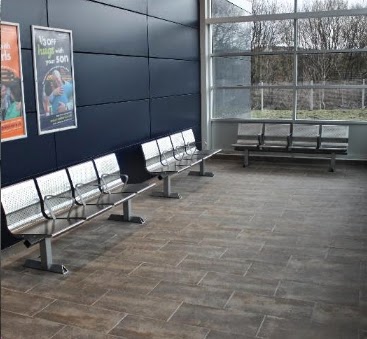 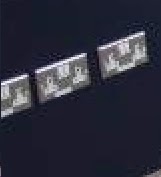 Cheekily, on the access road to the car park, McGills, the main bus operator, had parked a towed advertisement hoarding ... 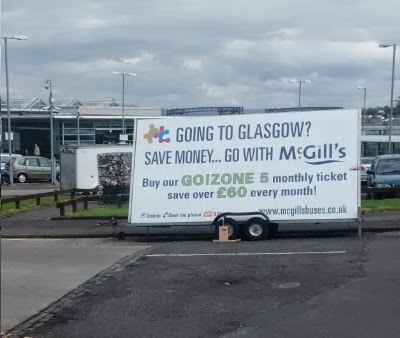 ... extolling the financial benefits of a season ticket. Despite there being no yellow lines, the trailer was clamped ... 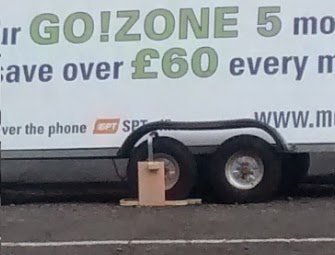 Dunno; but a house point to McGills for taking an opportunity to offer some competition to the every 15 minutes electric trains by guiding canny Scots folk to the express bus. Buses run only every half an hour during the day Monday to Saturday, but with extras at the peaks. Travel time is not very competitive, however, with trains taking 51 minutes (slow) and 39 minutes (fast) set against the bus at 1 hour and 15 minutes. You pays your money ...

But fbb seeks timetables; and what is this that we espy across the road? 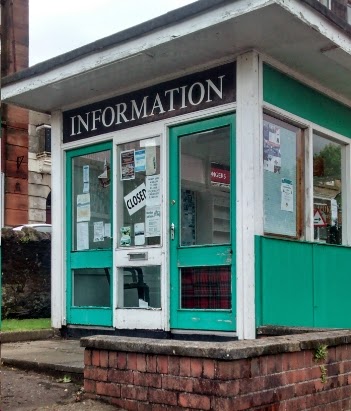 ... closed, of course. There was a notice on the door directing the vast crowds of enquirers to the local library, but no guide as to where that might be. In fact fbb noticed its imposing sign a few moments before the bus arrived, adjacent to the stop ... 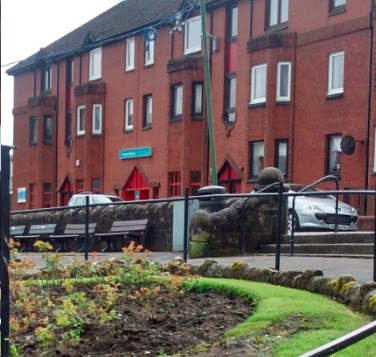 ... but too late to enter and enquire.

Now the leaflet said 1550 for the bus, but the departure list in the frame disagreed, offering 1600. 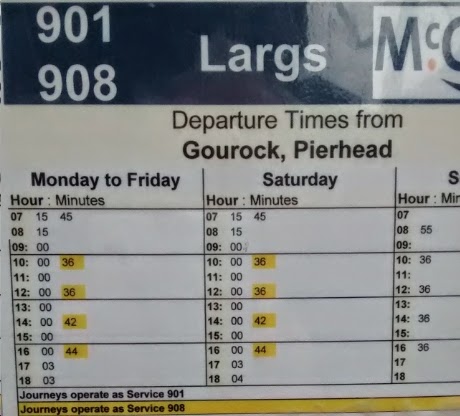 So which was right? The fbb's were at the stop at 1445 to cover all eventualities. When nothing had appeared by 1605, even their optimism was beginning to fade. fbb was just typing McGills enquiry number into his mobile phone (an 0800 number, please note; not a high priced 0870 jobby!) when the bus arrived at 1607. 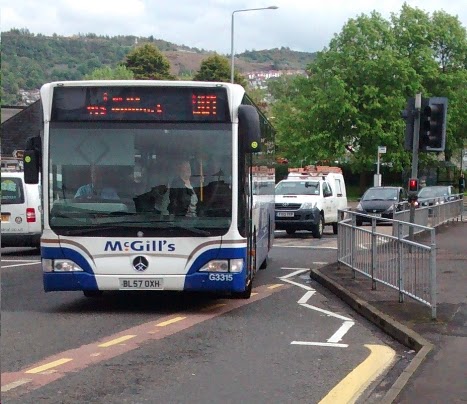 Was the bus 7 minutes late or 17? There were customers to alight at most of the stops in the town and a few to board, but once McInroys Point was passed ...

... it was "pedal to the metal" all the way. The Cloch lighthouse whizzed by in a blur ... 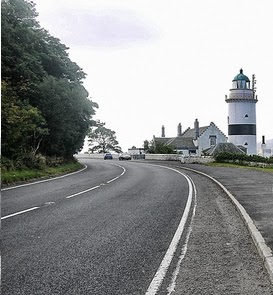 ... as the service 901 passengers enjoyed (?) a ride that would have graced Silverstone Circuit or Blackpool Pleasure Beach. It was fast (but safe) with every passenger holding on to everything and several keeping their eyes firmly closed. What a ride! But if the bus was 17 minutes late at Gourock, the driver may well have felt a desire to try to catch up time. 7 minutes is scheduled for the Largs turn-round with the bus and, presumably, its driver finishing their shift back in Greenock at 1715 via the direct 906 route.

The journey was so fast that fbb did not spot the massive Inverkip power station. 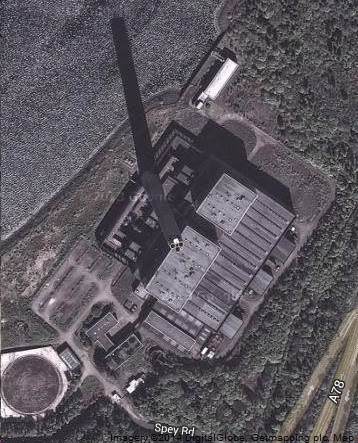 But there was a good reason for his observational failure.

Tomorrow we will explain all. 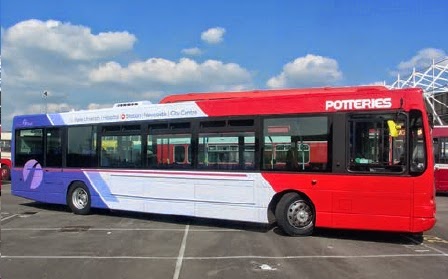 More in due course. (More about the livery and more liveries?)

Come back to  last Monday, 19th May ; fbb and Mrs are taking a stroll along the prom prom prom at Seaton and rest awhile at the service X53 stop for Lyme Regis, Weymouth and Poole. 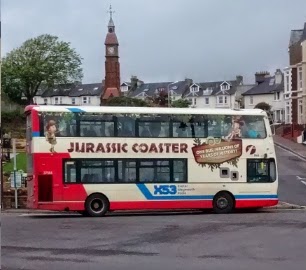 Thereat arrives a gentlemen and peruses the information on the pole. He looks confused. "Can we help you?" asks Mrs fbb.  "I want to catch the bus to Lyme Regis and I thought it was at 1611, but the sign says 1644." 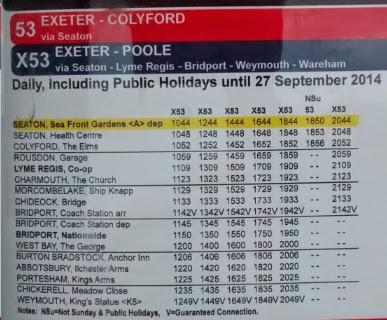 fbb proffers an explanation. "The timetable changes next week; have the idiots posted the new one a week early?" Yes they have, and with no start date to boot, and covering up the then-current one. But there is another timetable in another frame. 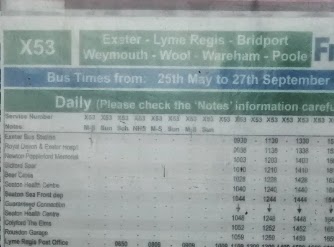 This is a full timetable, much better; but it's also for the revised times a week hence and it does have a start date ( Sunday 25th May ) and it, too, covers up the nearly, but not quite yet, out-of-date one. Fortunately, another potential customer arrives clutching a correct and then-current leaflet. The departure is 1611.

Now, there is plenty of space in the three frames at the stop. One contains blurb about the wonderful work of Devon County public transport department ... 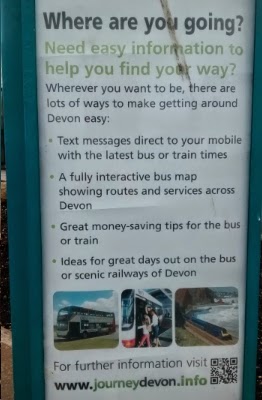 ... not mentioning the splendid policy of displaying the wrong timetable!