Arriva : The Jester from Leicester?

fbb and Mrs quite enjoy a bit of snooker. There is a calm excitement about many aspects of the game and the commentary can be fun, especially the mangling of grammar and syntax that emanates from an excitable former champion!

"He'll be kicking himself for that. A quick glance at the scoreboard. A wry smile. I can't believe he's done that. He's got tree centuries so far. It's the mid session interval." When else would you have an interval? And there's fbb's favourite, "this shot can gurrong." 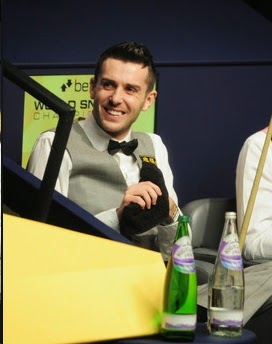 Mark Selby is known as "The Jester from Leicester" and, at the time of compiling this piece, is in the semi-finals of the World Championship. He is playing Neil Robertson (The Thunder from Down Under - he's Australian!) in a match scheduled to conclude this evening.

But his jesting role is somewhat eclipsed by the efforts of Arrivabus to obfiscate information delivery in "Ratae Corieltauvorum". Or perhaps it's not a joke.

It concerns this leaflet ...

The leaflet came into force in January this year. 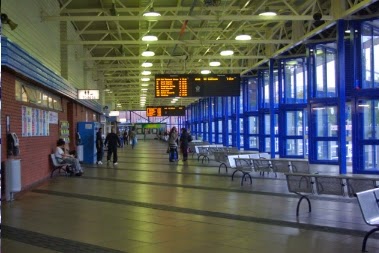 Now, fbb has commented before on publicity problems at this particular portal. See "Rings a Bell or Drops a Clanger" (read again). But we rush ahead of ourselves. David read the leaflet avidly, with passion and purpose and something didn't ring true. He ringed the untrue ringings! 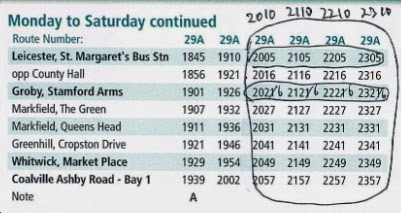 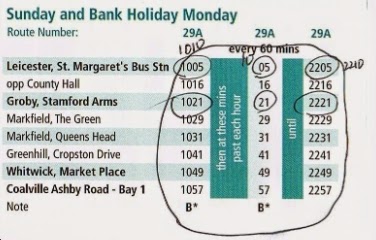 Neither did journeys in the opposite direction. Please bear in mind that David is a regular user of buses to and from his home in Groby, even evenings and Sundays.

"Have they changed again?" he muses. "I'll check on-line."

Indeed, David, the Leicester and Groby times are different and confirm your written amendment.  But, as there is no date on the on-line version, confusion may still have a portion of its reign to run. But the web site index shows ...

So we have three sources of information; the current interwebnet for October 2012, David's personal current experience and a January 2014 leaflet. It is worth reading fbb's earlier blog for a bit of "déja vu".

A look at Leicester city and county ...

... was fruitness as neither provide any useful timetable data but refer the enquirer to Traveline. So there we must go.

And there we have it; TWO OPTIONS for the 29A:- 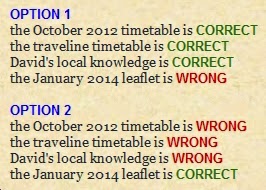 Of the four, fbb would trust David with his life - so Option 1 is correct and Arriva's January 2014 leaflet, distirbuted last week at St Margarets bus station, is wrong.

What chance does the average trusting member of the bus-travelling public have?

David did challenge the enquiry office lady. Her response, "buses don't always run to time because of heavy traffic." 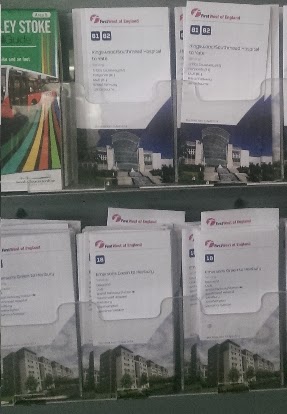 The current and correct leaflet for First service 18 has now appeared in the racks at Bristol Parkway Station. The hopelessly out of date local bus guide is still there (top left) to mislead and confuse prospective passengers. Leaflets for any other operator are conspicuous by their absence.