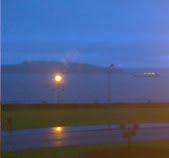 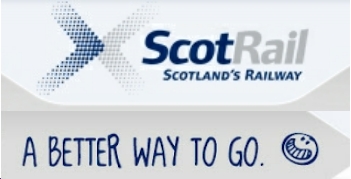 There is something impressive about the way the Scottish Government is handling its railway system. The simple idea that any company that wins the franchise must use the official livery and not its own ensures at a stroke that the railway will retain its identity despite the vagaries of privatisation. The policy of station improvement can be seen in all its magnificence at Wemyss Bay [pronounced Weemz]. 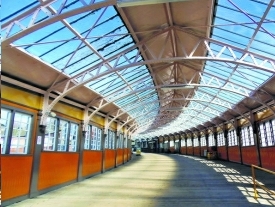 Here a long sloping walkway between train and ferry has been beautifully restored rather than demolished, and the spectacular circular booking hall is likewise returned to its opulent glory. 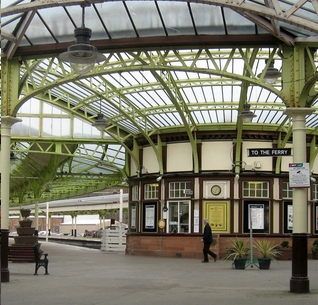 Whereas until recently in England and Wales, cutbacks were standard railway policy, expansion and improvement has been the watchword north of Hadrians Wall for many years. In the Glasgow area, fbb has observed and experienced the following:-
1979 Argyll Line via Glasgow Central re-opened
electrification to Motherwell, Hamilton and Lanark
1986 Ayr Coast line electrification begins
1990 Paisley Canal line re-opened
1993 Whifflet and Maryhill branches re-opened
???? Cumbernauld to Motherwell service introduced
2005 Larkhall branch re-opened
2011 Glasgow to Edinburgh via Airdrie and Bathgate re-opened
And there's more to come in the form of electrification of the fast Glasgow to Edinburgh (via Falkirk) group of routes. In the Edinburgh area there has been the re-opening of the line to Bathgate, the developent of the Fife Circle services, the start of Edinburgh Crossrail and, under construction, services to the borders towns via the long-closed "Waverley" route.
When it is finished, the re-vamped Edinburgh Waverley will return to something of its original splendour. In the meantime the agony of the 5 million rain-soaked steps up to Princes Street is replaced by ... 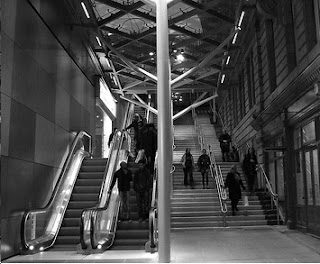 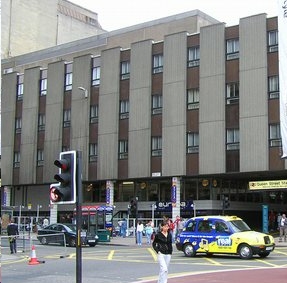 ... is to be replaced with something more befitting an efficient railway of the twentyfirst century.

By no means is everything is lovely in the State of Scotrail with, for example, delays and dithering over a link to Glasgow Airport; but the signs are universally positive and the fares offer astoundingly good value.
Take, for example fbb's off peak day return from Largs to Edinburgh ... 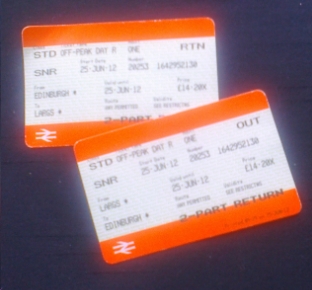 ... a trip taken on the Monday of his holiday. Note the fare, including fbb's old fogey discount,  £14.20  for a round trip of over 170 miles. The cheapest equivalent discount fare from Portsmouth Harbour to Waterloo is  £19.85  for a round trip of only 149 miles.
And then there's the refreshment trolleys on the 15 minute frequency "fast" route between Glasgow and Edinburgh, well stocked and politely staffed. 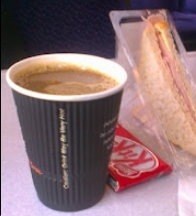 And, by today's standards, not exorbitantly priced; the above "lunch" was about £4.50 and the honey roast ham sandwich was "made in Scotland with passion"(?). fbb had eaten half the sandwich before taking the picture. Yummy! Although, to be brutally honest,  fbb couldn't taste the "passion".
Perhaps fbb should whisk Mrs fbb back to her homeland for a happy (and cheaper) retirement?

One final whimsy of the line from Largs to Glasgow. In planning their trip fbb noted that the cheapest fares are available after 0900. [fares quoted are with Senior Railward.] 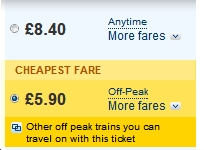 So fbb and Mrs arrived to pay their £8.40 fares for the 0828 to Glasgow and were surprised to be issued with two tickets at £5.90 each. Honest Joe (alias fbb) confessed his intention of travelling pre 0900 but the nice lady in the ticket offices assured him that £5.90 was correct. "It''s a special concession for people from Largs on the 0828 because the next train isn't until 0953," she advised.

What a sensible offer from Scotrail! Maybe someone should tell the National Rail web site? 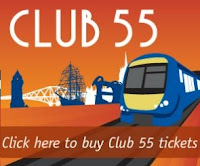 Those aged 55 and over can travel anywhere in Scotland (including from Carlisle or Berwick) for £19 return, £17 with a senior railcard or equivalent.