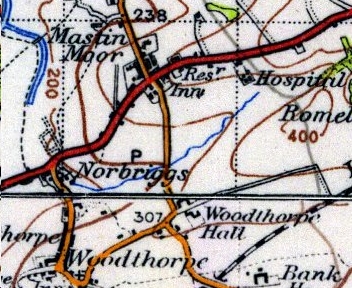 This 1940s map extract shows the hamlet of Mastin clustered round a crossroads. The "red" road is the A619 that links Chesterfield with Worksop, and the orange road is now the B6419 that links Bolsover with Renishaw 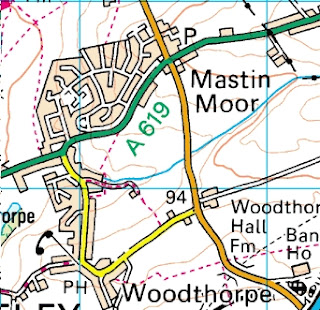 The hamlet of Norbriggs has been lost in the later expansion of Mastin Moor, effectively a 1950s estate of semi detached council houses now in private hands. Norbriggs is not lost totally, however, as a local school still carries that historic name. 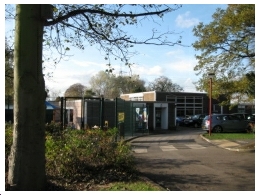 The fbb map explains what the buses do now - or, at least it tries to. 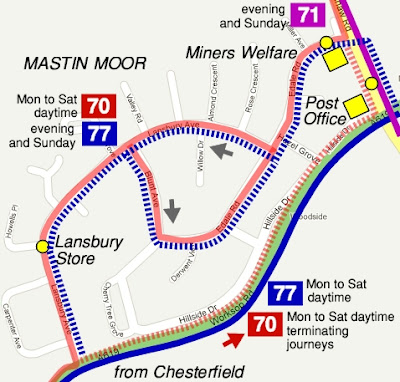 77  Monday to Saturday daytimes simply follows the A619 calling at stops just past the crossroads. Simple so far!
70  Monday to Saturday daytimes ought to be simple, as it runs via the housing estate, turns left at the Miners Welfare and continues to Renishaw, Eckington and Killamarsh. What made it confusing for the Famous Five was the route taken by buses terminating at Mastin Moor. These trips run via the Worksop Road to the crossroads, turn left at the lights, then left again at the Miners Welfare ... 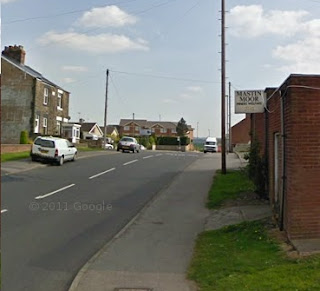 ... where they join the "normal" inwards route to Chesterfield. fbb suspects (but does not know for certain) that, once upon a time, buses terminating at Mastin moor used this odd little loop in the estate itself ... 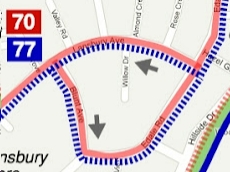 ... which adds a further and probably unnecessary complication. The "one way" roads are only "one way" for the bus services and are the same size as all the other "two way" roads used.

The outward timetable makes the present-day larger loop, via the "old" village crossroads, fairly clear but the inward panel shows no times at the post office (Renishaw Road) although these journey pass and stop there. 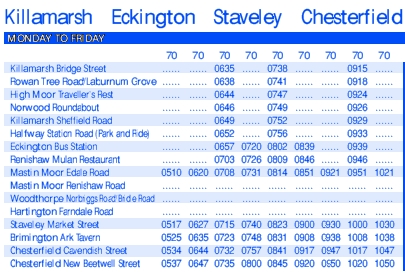 fbb thinks the inward timetable should be shown thus:- 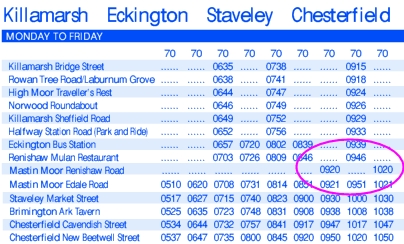 But why is there a big gap with lots of dotted lines in the top (original) timetable?
71  Evenings and Sundays. That's because the evening service 71 is shown as part of the 70 timetable. It would be better to show it separately. The 71 doesn't serve the Mastin Moor Estate but it does call at the Post Office crossroads. So, if you are still with us; Monday to Saturday daytime 77 goes straight along the main road, Monday to Saturday 70 serves the Estate, evening 71 doesn't serve either.
If you only look at the 70 and 71 combined timetable pages you would conclude that there are no evening buses to the Estate. But, of course, you would be quite wrong.
77  Evenings and Sundays runs via Mastin Moor Estate! In the Stagecoach mini-booklet there is no cross reference at all. There is no easy way to find it. There is no map! Nowhere near the 70/71 timetable is there any comment that there is an evening service. 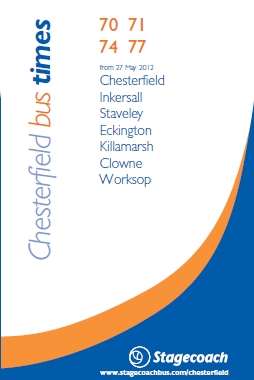 Obviously, locals will get to know; but incoming visitors will struggle. Stagecoach are not renowned for their publicity's ifnormative detail, rather being satisfied with keeping their "regulars" informed of routine timetable changes. So, for the benefit of the yesterday's Famous Five visit and in the interests of telling people where the buses actually go, how about a map and some explanation, Uncle Brian?

It would be a good idea, as well, to show a "time point" in Chesterfield at "Brewery Street for Station" for the obviously near-incredible concept of a passenger wanting to change from a Stagecoach bus to a Stagecoach (East Midlands) train. 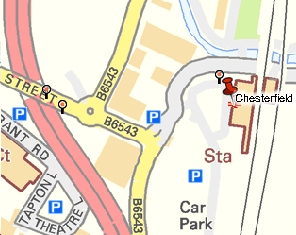 
Next Blog : Wednesday 6th June
Posted by fatbusbloke at 20:20