Has Anyone Here Seen Kelly?**

Chum Alan (or Northampton correspondent) has been on his hols to the Isle of Man. 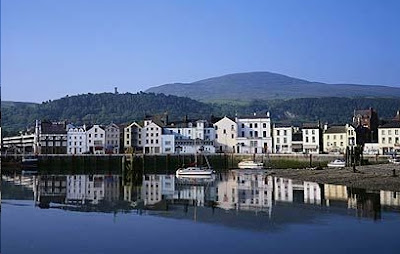 
His emails offer a tantalising taster for that haven of all that is fascinating in public transport.

Nice uneventful journey to and from the Isle of Man with London Midland to Birmingham New Street, Virgin to Lancaster then the one passenger train a day that navigates the branch to Heysham harbour for the boat to and from Douglas. 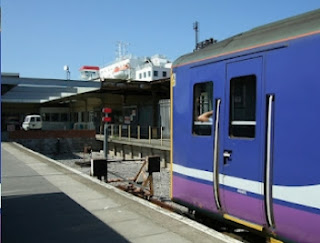 Journey completed by a trundle along the prom towing wheeled suitcase to the hotel.
.
This was our Island tour bus. 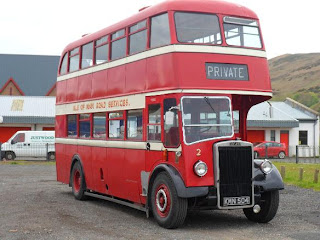 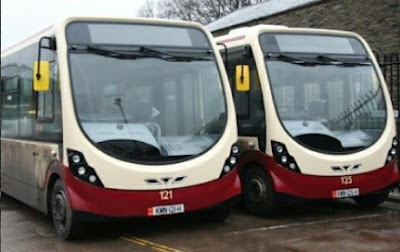 ... for quiter routes which is OK until a large group of persons of our vintage for whom bus travel is a novelty all decide to go on the same bus to the Folk Village. (aka Service 8/8A Port Erin - Craegneash - Calf Sound. see timetable extract below : fbb) 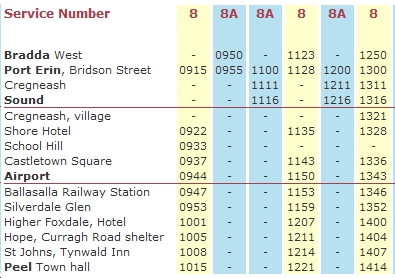 Believe it or not, last week I had two fifteen minute sessions of driving the vehicle illustrated. The design dates from 1894 but the the tram from 1994 as the original one caught fire. 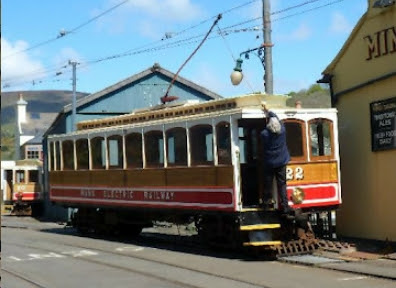 Apparently folks whose of idea of tram driving is trundling along about a mile of nice level track at Crich get a suprise when they do the Isle of Man. You are let loose on the real system between Laxey and Ramsey with gradients, dodgy track joints and bends, crossing roads and trying not to run over the local sheep and goats who have decided to take a walk along the track. Great fun. 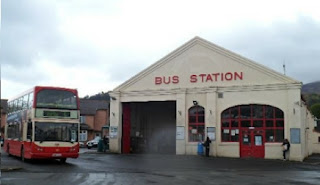 Skaledale or someone should make a 1:76 model of Ramsey Bus Station pictured. It combines garage, waiting room and bus station (well a sort of tarmaced area outside). Next week you will need to use the nearby footbridge ... 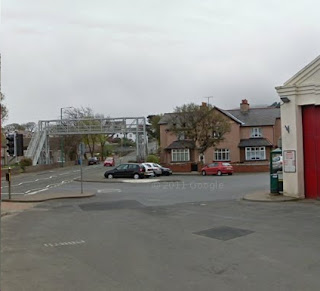 ... to cross the road to the town centre because chaps will be going by on motorbikes at approx 200 mph. 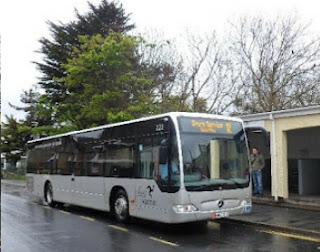 And Bus Vannin have started buying single decks painted John Major Grey (or is it silver) rather than the lovely rich red and cream. Shame!
But, the ever resourceful fat bus bloke can, in part, answer Alan's suggestion that someone should make a model of Ramsey bus depot/waiting room/garage. Somebody has!

"Kingsway" (complete with cat?) produces a whole range of card kits for bus garages, mainly for London but also for provincial locations, including Ramsey! 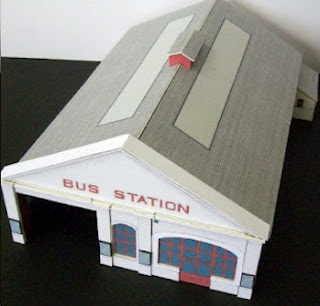 The kits are fairly basic and would benefit enormously from real glazing in place of printed windows, but they would offer a good start for a keen moddler and they do convey the essence of the real thing. Have a look at their web site (here).
** Has Anyone Here Seen Kelly?

"Has Anybody Here Seen Kelly?", music and lyrics by C.W. Murphy and Will Letters (1908), is a British music hall song, originally titled "Kelly From the Isle of Man". The song concerns an Irishwoman looking for her boyfriend.

Kelly and his sweetheart wore a very pleasant smile,
And sent upon a holiday they went from Mona's Isle,
They landed safe in London but alas it's sad to say,
For Kelly lost his little girl up Piccadilly way.
She searched for him in vain and then of course began to fret,
And this is the appeal she made to everyone she met:

When it started raining she exclaimed, "What shall I do?"
For Kelly had her ticket and her spending money too,
She wandered over London like a hound upon the scent,
At last she found herself outside the Houses of Parliament.
She got among the suffragettes who chained her to the grille,
And soon they heard her shouting in a voice both loud and shrill:
.
altogether now with the chorus ..... 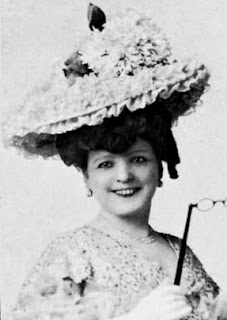 And, even better (?), a recording of Florrie Forde singing it (here).
.
Later next week, we take a look at one of the best timetable books available in the whole of the British Isles; and, Man, it is good!


Next Blog Sunday 3rd June
Posted by fatbusbloke at 05:44