WARNING
Yesterday fbb's laptop started behaving erratically for no
obvious reason. Blogs may fail or suffer from delay until
the problem can be resolved. Please return to check. Ta!

Saved from Scrap by a £2 Donation!! 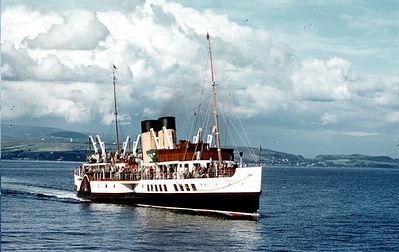 Any trip on the Waverley is memorable for Mrs fbb; as her father, a ferry enthusiast, took her on trips when she was very young, probably about 5 or nearly 63 years ago. This was when the vessel was just three years old. Dad made a significant contribution to the restoration fund (£2!). A visit to see the engines is as big a thrill today as it was then. 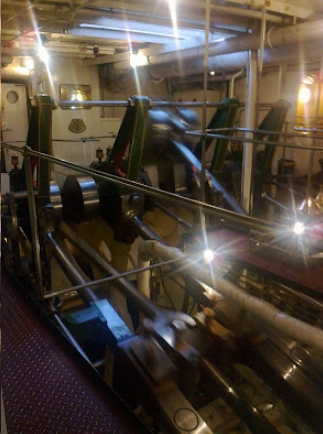 Tuesday's cruise was form Largs via Loch Long to Carrick Castle on Loch Goil, calling at Dunoon and Blairmore. Blairmore is on the western bank at the southern end of Loch Long. 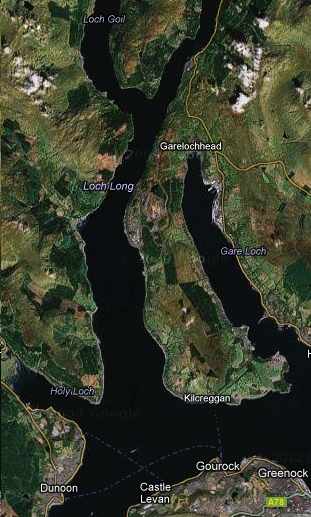 The weather forecast was grim and, indeed, heavy rain set in just before the vessel turned for its return run at the Castle (at the little "pimple" sticking out from the south west bank of the loch). Much has been written about the Waverley, and fbb can add little to the millions of words already penned.
The call at Blairmore was significant, however.

Before motoring became the norm and before roads became universally navigable, the various steamer services were the only public transport to the dozens of small lochside villages. Most of these "mini" piers have long since fallen into disuse and disrepair; the majority have simply disappeared for ever. This would have been the inevitable fate of Blairmore had it not been for the vision and generosity of a certain Mrs Agnes Harvey. 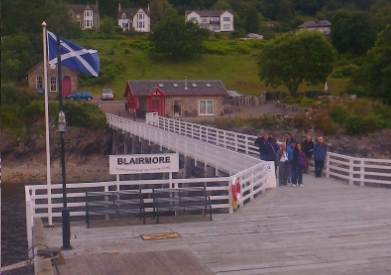 She bought the pier and established Blairmore Heritage Ltd in 2004. Subsequently the Friends of Blairmore Pier Trust was created. The Trust accessed grants which allowed for the restoration of the Pier. The Friends of Blairmore Pier Trust is a “not-for-profit” organisation generating income from berthing fees, merchandise and organised events and the Pier is now leased to the Trust for community use.
.
The former ticket office (red paint) is now a holiday cottage which retains the ticket window underneath the walkway on the left of the building. 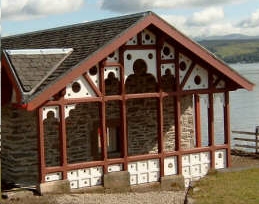 Half close the eyes, ignore the hard hats, the life jackets and the high-viz vests of the pier team and you can almost think yourself back in the early 1900s.

The spookiest part of the cruise was passing the nuclear submarine floating dry dock... 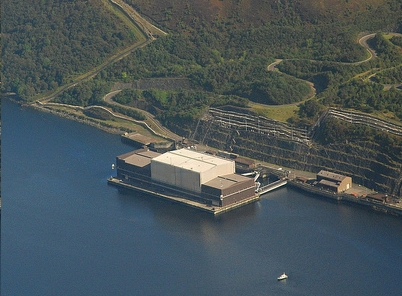 ... part of the massive Coulport base. According to our captain, 400 military police have the task of protecting the  site, which includes a perrmanently manned police launch and eight (or so) tall wathtowers up on the hills. 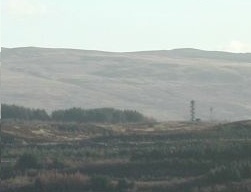 fbb may be incarcerated for publishing these pictures! 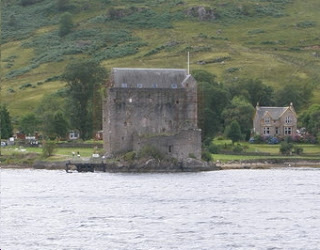 ... at which point overcast and drizzly conditions became a West Coast of Scotland Monsoon. The return run was "enjoyed" in one of the cabins, drinking tea and peering through the downpour. Occasional and brief forays into the open deck were all that was sensible; hence the blotchy shot of "Arygll Flyer" through the cabin window. 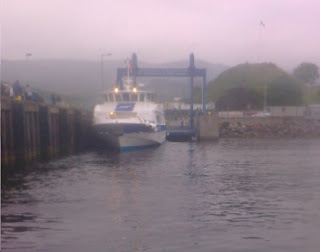 "Argyll Flyer" docked evocatively in front of the
linkspan of the withdrawn Dunoon to Gourock car ferry
A typically Scottish "High Tea" back at Largs ended a splendid afternoon as the rain pelted down and the Cumbrae and its ferries disappeared into the murk. 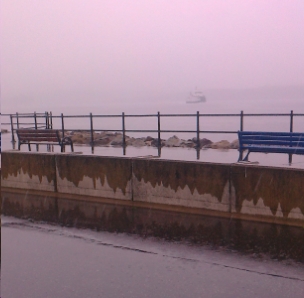 Meanwhile, a comment from "Man of Kent" on yesterday's blog reminded fbb that M V Keppel, the last passenger boat to the Island of Cumbrae, started life as a British Railways ferry plying its trade as "Rose" between Tilbury and Gravesend. Note the early "right handed" BR logo used intitially for Sealink vessels. 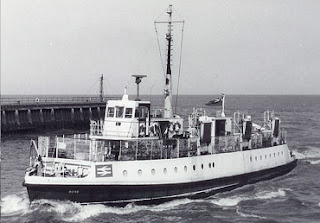 After departing from Scottish waters, Keppel worked (maybe still works?) in Malta. This picture is dated 2010.

"Hornblower", by the way, is the name of the cruise company. The vessel is still called "Keppel".

Today fbb and Mrs are travelling to Glasgow by train (again!) and hiring a car (shame) to visit an elderly lady, a former member of Mrs fbb's Women's Fellowship, who emigrated at the age of 91 from the Isle of Wight to join her daughter in Fintry, north of Glasgow. Public Transport is impossible! Yesterday's trip to the Isle of Cumbrae by ferry and bus produced more of interest than expected, so, technology permitting, tomorrow's blog will be a more substantial report than orignially intended.