Just over a year ago, First started a competitive service 22, branded with "two little ducks" (as in Bingo calls), running every 10 minutes Monday to Saturday daytime between Rotherham, Wath and Barnsley. Now, dedicated blog reader and transport observer, if you were starting a new competitive bus route, upping the "ante", you would want to shout it from the rooftops; especially if you were hoping to pinch a few passengers back from First.

On Sunday 29th April, less than 24 hours before the service starts, how is Stagecoach's delayed but  massive fight-back presented on their Yorkshire web site?

Hidden at the end of a long, long scroll-down list of changes is:-
.
Changes to bus routes and timetables from 30th April 2012
.
Service 22 MAGICBUS Rotherham – Manvers – Wath
.
New limited stop service running from Rotherham to Manvers and Wath. It will run every 20 minutes during the daytime on Mondays to Saturdays.
.
This service will be limited stop between Rotherham town centre and Swinton stopping at Parkgate Shops, Rawmarsh (Dale Road) and Swinton (Woodman roundabout). It will then serve all stops between Swinton (Woodman roundabout) and Wath.
.
Special fares will be introduced on this service including route specific magicbus fares.
.
Stagecoach has ordered some leaflets, but, again, a day before the start date, nothing had appeared in public. fbb e-mailed twice asking for a leaflet which, he was told, were "on order"; a copy would be posted "as soon as they arrive". Nothing so far. fbb's South Yorkshire spies had seen nothing as of Friday last, but no-one had yet ventured as far afield as Barnsley. There be dragons.

Meanwhile, back in Travel South Yorkshire [TSY] Towers, Director David Brown's team of accuracy enthusiasts have re-issued the First 22 leaflet with Magicbus journeys at the back. 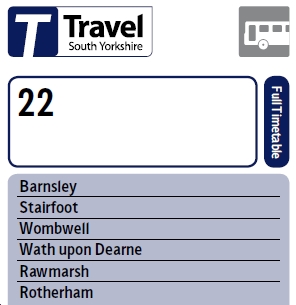 The front cover of the leaflet does show the Magic Bus name ... 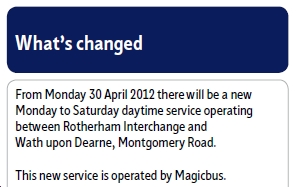 ... but nowhere does TSY tell people that Stagecoach's version misses out all but two stops between Rotherham and the Woodman Inn roundabout. 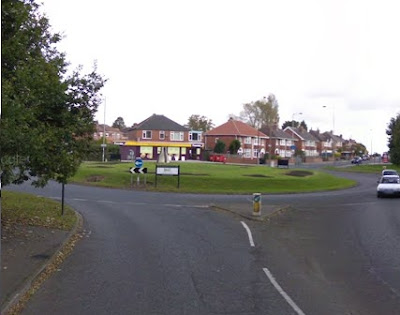 And a word of advice to Stagecoach publicists. Despite what your parlous advance publicity says, this roundabout is not, and never has been, at "Swinton". Actually the Woodman Inn isn't at the roundabout either, it's a couple of hundred yards up the road to the left, behind those trees. The "centre" of Swinton is at the Co-op "stooers**" and Library about a mile away. Both 22s turn off towards Manvers down Golden Smithies Lane, here ... 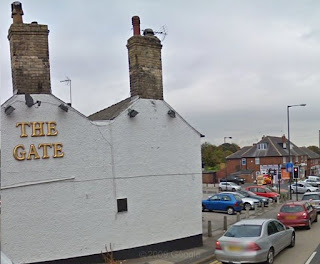 ... at "The Gate" traffic lights long before stopping adjacent to "t stooers". 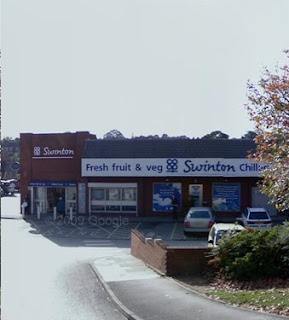 Warning! If you want to get to Swinton, make sure you miss the Magic Bus. 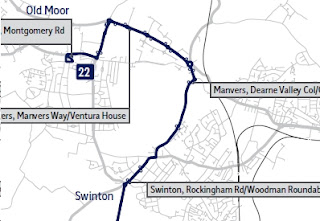 The main shopping centre is about halfway between the 22 route and the railway station, just above the "k" of Rockingham.

May 2011 First competes aggressively with Stagecoach on the Rotherham, Wath, West Melton and Barnsley corridor with a bus every 10 minutes serving all stops and numbered 22. Stagecoach does not respond.

Plenty of duck-branded of leaflets and timetables are distributed; most buses quoting their quacking quality from day 1.

April 2012 Stagecoach eventually responds with a Magicbus service omitting most stops over half the route, running every 20 minutes between Rotherham and Wath only. This is also numbered 22 and will, of course, sail past most people waiting between Parkgate and Woodman Inn roundabout. They will be so pleased to be excluded from cheap fares! 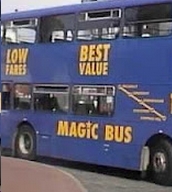 Fares Stagecoach promises "Special fares will be introduced on this service including route specific magicbus fares." but seems unwilling to tell anyone what this means. The leaflet is early awaited. 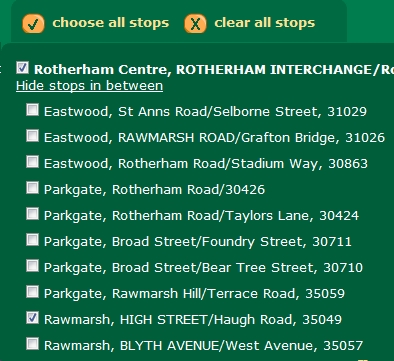 Magicbus only stops at Rotherham bus station and ONE of these before zooming quickly to Rawmarsh and Woodman Inn, NOT Swinton.
.
Buses magazine for April tells us that it is 22M (for Magicbus).
.
But 22 it is. We think! And it starts today. Probably. 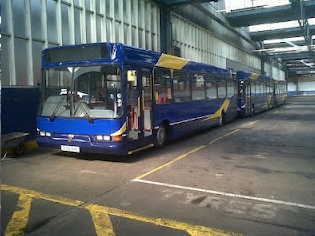 Thanks to "junesboy"
from South Yorkshire Transport Forum
These are the buses awaiting "Magicbus" logos.

From a bus war point of view, it's not much of a fightback. No doubt Stagecoach hopes to recover some of the business it has undoubtledly lost as a result of First's incursion; but this is more gun-boat diplomacy rather than a fully armed fight-back. Sooner or later one side will give in. There will be a "deal" struck. Of course such collusion is utterly illegal ...

If there is any more information, fbb will report later in the week. His correspondents in South Yorkshire are still on the case.

**stooers : folk in South Yorkshire have always used this (attempted) dialect version of "the stores" s a descriptor of "the co-op".

P.S. It's now 0824 on Monday 30th April and the timetable for the Magicbus 22 has not yet appeared on the Yorkshire bit of the Stagecoach web site. Other changes are in place.

Next blog : Tuesday 1st May
Posted by fatbusbloke at 06:34