... and on! All over the country thousands of perspiring personages are perpetually probing their laptop for the "best deal". fbb is preparing for his holiday (with Mrs) in Largs at the end of June.

Taking all things into account, fbb's choice narrowed down to standard class seats on any off peak train at £201.40 or a train specific first class extra discount at £260. 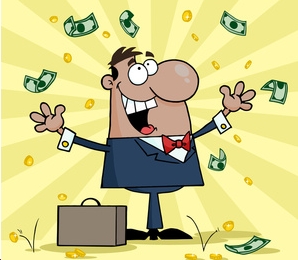 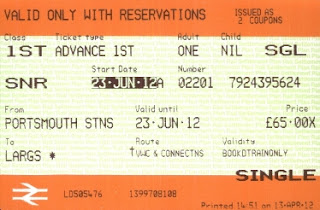 But, of course, that descision does not tell the whole story; well, it wouldn't be that simple would it? See "fbb's Foray into First Fares [1]" (read again). Here are ALL the "anytime" fares, that's on any train with no time restrictions, from Southampton to Glasgow. Note that there are now TWO different First Class fares. 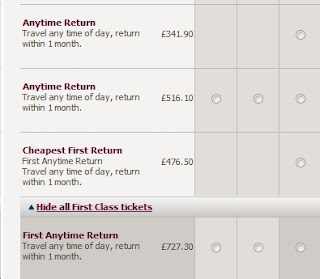 The cheaper ones are on Cross Country's services via Birmingham, i.e. NOT via London; but still nothing cheaper than £130 for the single. Note that the buttons in the third column do allow you to choose to pay either £727.30 or £476.50 for exactly the same first class "anytime" journey. Hmmm ... difficult decision. 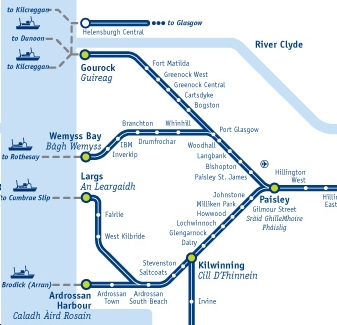 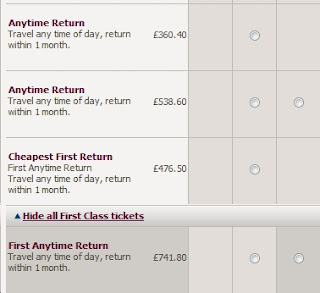 But there aren't any first class seats to Largs anyway; trains are all standard! So, you see, it's NOT First Class all the way.

And what would be the very best for Portsmouth to Largs, if you could travel whey THEY wanted you to? And all the offers fitted together.

Fares quoted  below  are for ONE senior with railcard discount

Portsmouth to London - £2.20; booked train only. Standard Class with Southern. 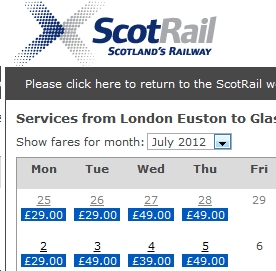 Glasgow to Largs any train single £4.75.

By comparison the anytime First fare is 71.5p per mile.

The chances of actually getting Portsmouth to Victoria and Euston to Glasgow mega-discounts on the same day and with suitably connecting trains are very remote, but it just might be possible.

Fares varying from 5p a mile to 71.5p a mile on similar trains and on the same routes, with the cheaper fare available for what used to be the top-rank premium sleeper service, must be crack-brained. Something is very very wrong somewhere.
.
fbb is just waiting for Barry Doe (Rail magazine's fares guru and fbb's chum) to phone with a scheme whereby the chubby one can take a slightly circuitous route via Norwich, Shrewsbury and Barrow in Furness and get there for ten bob ... 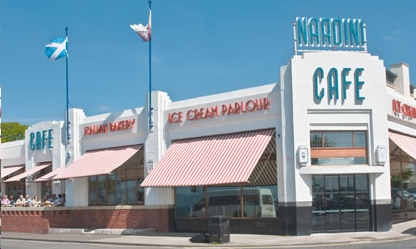 But coffee and a sticky bun in Nardini's is calling; and the skirl of the pipes and the snarl of the rutting haggis beckon the fbbs across Hardian's wall. They can't wait to gaze over to the Cumbrae ...


Next Blog : due Thursday April 19th
Posted by fatbusbloke at 04:48