Later to Laze at Lovely Largs. 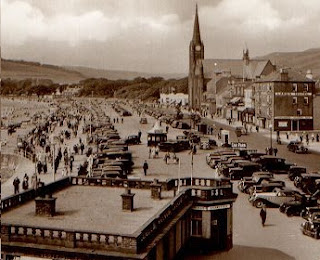 Largs, on the Clyde Coast has happy memories for Mrs fbb as she spent many happy childhood holidays there with her parents. In 39 years of marriage the fbb's aim to return to Mrs' Scottish heritage at least every two years. So it will be at the end of June that the chubby one and his long-suffering "good lady" spend a week in a holiday flat in Largs.

fbb has lost his youthful enthusiasm for long distance motoring and, as the gaff is literally just round the corner from Largs Station, a reasonable rail fare would be ideal.

And First Class fares are, of course, even more beyond the reach of normal mortals. Here is First Class anytime from Portsmouth to Largs via London ...

... which is over TWICE the flat rental cost. Ouch and ouch again! It was the same (£726) fare to Glasgow. Mega-Ouch!

Which begs the question. Who actually pays these monstrous fares? Presumably only the very wealthy or where someone else is footing the bill! Which begs another question. Are the train companies shooting themselves in the brake block by advertising these fares so "obviously"? Isn't it about time to promote the "off peak" offers as normality with a clear warning that some peak time journeys will carry a "We really don't want you to travel" preposterous penalty fare?

The standard off-peak offering is a little less terrifying and saves the cost of the flat compared with "Anytime". Of course, off-peak is becoming more and more restrictive as the train operators seek to maximise their revenue to replenish the Chancellor's coffers and enhance the shareholders income.

But can that be bettered? Now it starts getting confusing, frustrating, annoying and, to the humble outsider divorced from the thrills of yield management, just plain stupid; because now you have to start thinking about specifying a train, out and back. Try Southampton to Glasgow. 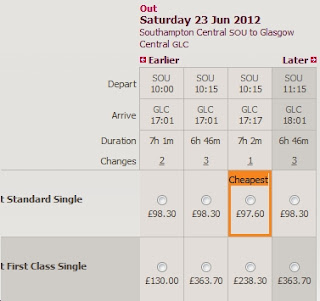 At £97.60 single for a shorter journey? Big saving, NOT! Southampton to Largs? 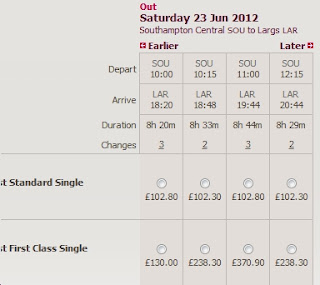 Now no saving at all, in fact two singles are a penny or two dearer than the off-peak return.

What about Portsmouth to Largs? 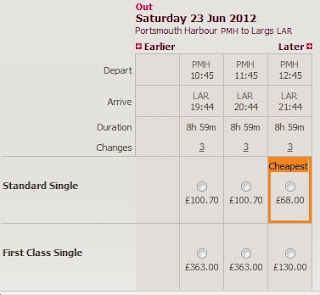 And by travelling a bit later, we can find a significantly better standard class price. BUT fbb and Mrs don't really want to arrive at their pentouse pad at nearly 10pm. Why, that's nearly their bed time poor things.

In fact when fbb first started this convoluted and challenging process there were times when a first class single was significantly cheaper than a standard class single. DAFTNESS in the extreme! But by the time fbb came to actually make a booking it had all changed and the cheaper first class fare for those particular journeys had vanished into the ether.

Maybe a week in Sandown would be less hassle. There's a bus every hour! But Largs is a very pleasant resort and Mrs fbb does get gloomy if she doesn't go "home" to Scotland at least every other year. Furthermore, there is a scheduled trip on the Waverley to enjoy as well ... 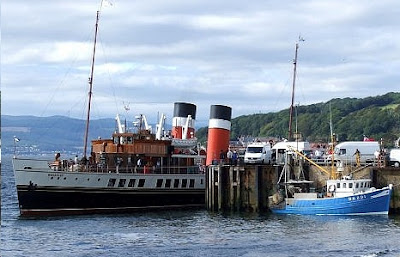 ... and the flat is in a very pleasant location with fine views.

Next Blog : due Wednesday April 18th
Posted by fatbusbloke at 22:42