How does travel on the "Eclipse" busway service match up to the promises on its website?


It’s not just queue-beating convenience that you can expect from Eclipse. The brand new, low-floor, low-emission buses, with their striking purple and gold livery, are amazing. With individual leather seats, wood-effect floors and under-seat lighting, the interiors are first class, while your travel experience is enhanced by audio and on-screen next stop announcements.


On Monday 23rd April (first weekday of operation) fbb and chum Alan travelled on four Eclipse buses. Only one had audio announcements.

As for the "on screen" next stop information ... 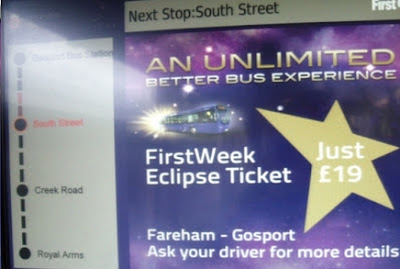 ... this is on small computer style video screens at the front of the bus, illegible from further away than a couple of rows of seats. Frankly of no use whatsoever to the majority of the passengers. With no audio it was very difficult to spot where you were in wet weather. On the busway, the stop names are either parallel to the road and quite small ...

... thus illegible until you were almost upon them; trendily designed to look good but too small to be of any help.

Comprehensive real-time travel information in shelters and on board.

No. There was no information about times on board at all. From time to time the screens on the bus did scroll to show the above message. So how was it at the stops?

There was a weather forecast ... 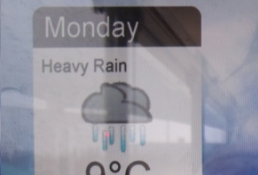 ... which told us that it was raining heavily; not too difficult to discern by (a) looking and (b) stepping outside the shelter! There was a timetable for the Gosport Ferry and a list of departures from Fareham or Portsmouth Harbour station depending on direction of travel. 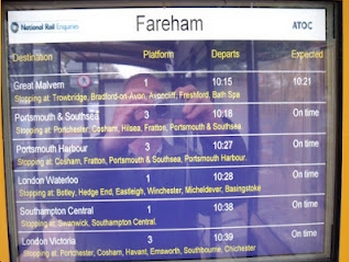 It is difficult to see what use the average passenger might make of this gimmick, especially as there was no guide as to what time you might arrive at the ferry or station. No bus timetables at the stop! Anyway, mostly you would arrive well after all of the departure times shown on the screen. 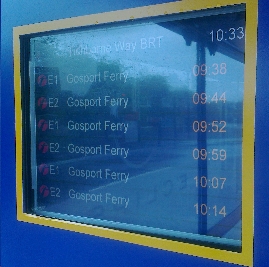 And what about these two journeys, two E2s together?

fbb thinks that the first E2 is the timetabled journey at 1044 and the second E2 is the same bus but with its real time generating thingey actually working and due in 13 minutes. This was a bus that fbb caught - and there weren't two of it! And only one of the six buses shown could accept a wheelchair? Really?

And, of course, all this trendy technology is only available on the busway itself (where relatively small numbers of passengers will be waiting). At the busy "in town" stops in Gosport there is just a fancy pole and a shelter, if you're lucky! 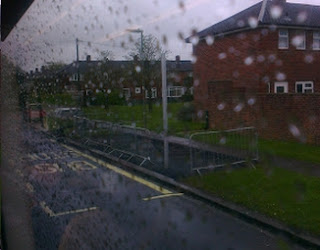 There were problems with technology. fbb's first driver was struggling with un-kneeling, door closing and reversing, whilst at one stop things were not going too well with one breakdown, one replacement bus and a First man-with-van all clogging the road and holding up other buses. 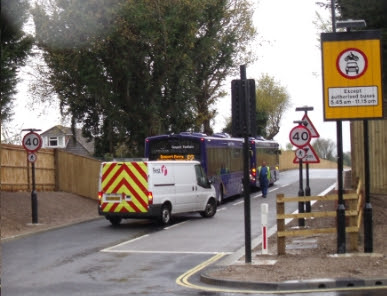 Interestingly, fbb counted more non-bus vehicles (12) on the busway than buses (8). Presumably they had a right to be there as they included a small van, emblazoned "security", busily checking that no-one had stolen a bus. 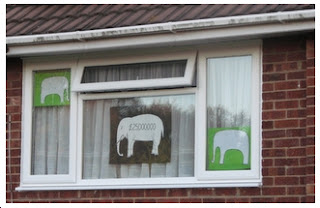 The "Omnibuses" blog reported on the Busway on Sunday (and Monday) and included this shot of a bedroom window display. Which begs the whole question. White elephant or huge success?

The journeys are mostly on conventional roads, mainly back-street and estate routes where progress was tediously slow and a very "normal" bus travel experience. The relatively short section of busway has been very expensive to build for the benefits it is intended to deliver. 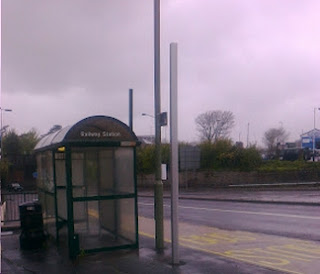 Interchange at Fareham station was poor. Inbound from Gosport the announcement was "the next stop is alighting only" with no reference to the station at all. The outbound stop (towards Gosport) was flag-less, unreal time-less and accessed via either the station approach road ... 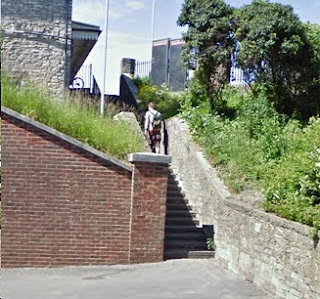 ... or some steep steps, followed by an uninviting underpass ... 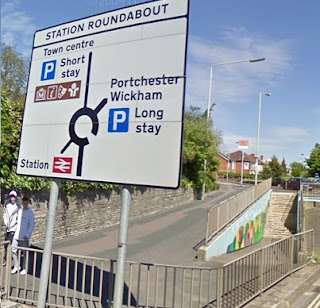 ... and not even a sign directing a potential passenger to "buses for Gosport"

fbb wonders whether there is a bus departure display in the station foyer? Thought not! Signs from the station to the stop? Not sure, but could guess! And, oddly, you can't catch Eclipse from the station into the centre of Fareham, 'cos the stop is "alighting only". Why?

But, of course, it is early days. Let's hope that the electronics can be made to work and that the computer geeks will deliver what the passenger needs; rather than trendy technology for technology's sake. Despite perceived inadequacies, the buses all appeared to be adequately loaded, although slower than the previous conventional routes. Perhaps the best comment was from chum Alan who opined:-

This looks like a typical political project, "Hey, we've got a bit of disused railway, we can't afford to re-open the line; so what else can we do with it?"
.