A change of plan? You bet!


In "Trains, Tite, Trams and Transit [a preview]" (read again) your eager and enthusiastic blogger annouced that he would be reviewing the new service 4/4A/X4 group of routes between Southampton, Gosport, Fareham and Portsmouth.

These services, starting on Sunday April 22nd, are part of a dramatic reworking of the whole of First's Southampton network. The big City change is on Sunday 29th April. Apparently the new 4 (etc.) was moved a week earlier to ensure that everything was new, hunky-dory and reliveried for the launch of the Eclipse busway network.

And the earlier date for that has something to do with popular Minster for Buses, Norman Baker ... 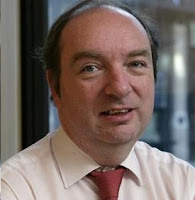 A full review, however, of the revised "4" routes has been undertaken in considerable detail by "The Southampton Bus Update" blog (read in full here).

No point in fbb doing all the work again. Suffice it to say that frequencies are generally improved (a recent first for First) and there is a through service to Portsmouth. Expect a further report after a travellers trial of the timetables on Monday 23rd April.

So now we look at the rest of the new and "revolutionary" Southampton network.

Via Portswood : no major route changes
The 7 (University) becomes the 5
with a route change at Bassett. 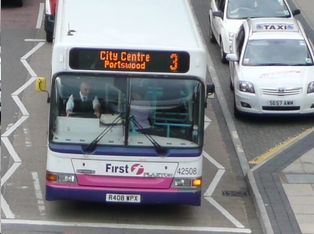 The 3 (Townhill Park) becomes the 7

For routes east of the river Itchen, here is the old network diagram:- 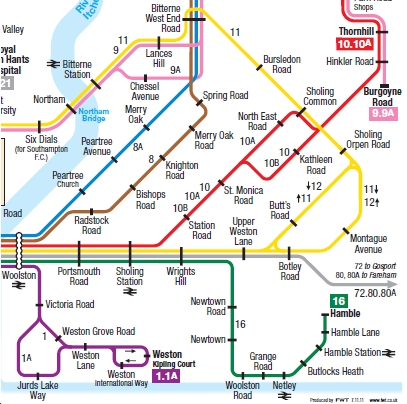 Via Northam Bridge : one change of ultimate destination
The 11 (Montague Avenue) becomes the 9
The 9/9A (Thornhill) becomes the 8 (Hedge End)

Via Peartree & Merry Oak : one change of ultimate destination
The 8A (Hedge End) becomes the 2A (Thornhill)
The 8 (Townhill Park) becomes the 2 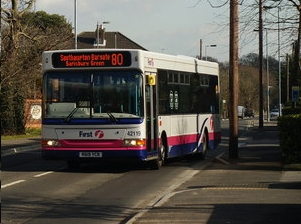 Weston
The 1 loses its 1A variation via Jurds Lake This produces the new network map: 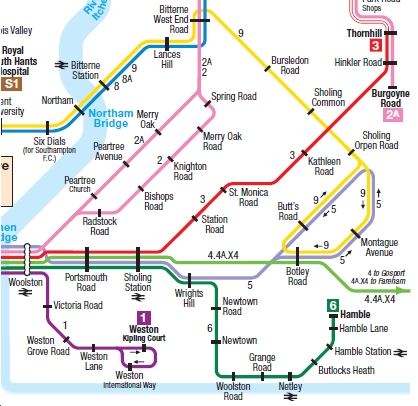 So, apart from a little jiggling of destinations and routes into the City everything (almost) that ran before is still running on the new timetable; the exceptions being the withdrawal of the 9A from Chessel Avenue,  the 10 from North East Road and the more significant abandonment of buses via Jurds Lake.

But, and aye, there's the rub, everyone's times have changed and everyone's route number has altered in some way or another.

And changes to the west of the City Centre are more dramatic as we shall see in due course.

We are thus left with an age-old an unresolvable debate. Do we congratulate First for an imaginative and somewhat simplified new network with re-instated cross-City links. OR will there be fury and frustration from folk from day one when they can't find "their" bus? Putting it another way, is it wise to "do a whole network change" at once or in more easily managed (and publicised) chunks.

The designers of this new network have "cleverly" arranged that route numbers follow a "logical" pattern, thus 1, 2, 3, 4, 5  and 6 all go via Woolston. On balance, would it not have been less confusing to leave unchanged routes with their traditional numbers? Does "clever" route numbering on its own (without route and vehicle branding) really create extra business? 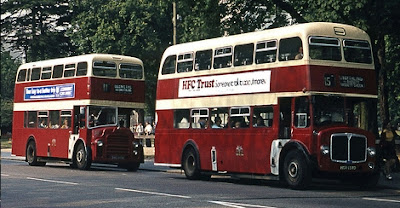 aaah! Those were real Southampton buses!

In due course, fbb will keep his eyes open, his ears pinned back, his nose to the grindstone, his back to the wheel and his best foot forward to bring you local reaction.

In addition there is further opinion from a recent "Omnibuses" blog. (read here)

And there is an impending fbb blog on things from City Centre "out west" due soon. And fbb's fellow blogger in Southampton (The Southampton Bus Update) has done a much deeper analysis of each route; he link given above will lead the dedicated detail delver onwards and upwards


Next Blog : due Thursday April 12th
Posted by fatbusbloke at 08:39