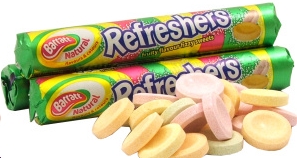 ... delectable though they be.

But a few passing thoughts on the "refreshed" new livery for First Bus. 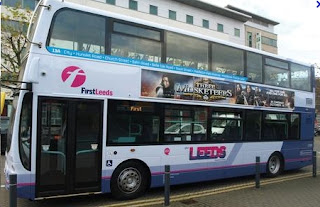 Reactions from all over the place have been less than enthusiastic, ranging from "a significant waste of effort" (substitute your own adjective of asperity) to the rather patronising "it looks better live than in photographs".
fbb has refrained from public comment, partly because of his 40 or more years of friendship with Giles Fearnley is far more important that getting cheap laughs from a blog.

We are promised a fully fettled fleet for the Fareham busway (and allied service changes), opening on Sunday April 22nd. And we are promised brand new purple people eaters** for the busway routes themselves. 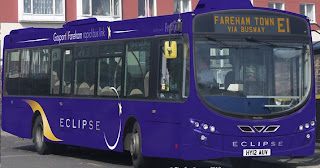 Incidentally, this "mock-up" still shows the First "Barbie" leaf motif in gold, now superseded by pale purple diagonals.
We are told that local management will have freedom to "adapt" the national livery to suit local marketing. This has happened recently in Stoke on Trent. 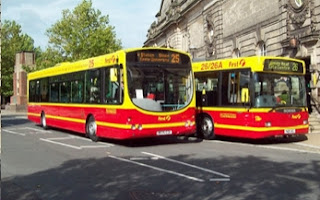 But an undercover fbb correspondent has been around snapping some other "retro" experimental liveries. There's a touch of SELNEC orange seen lurking in dismal northern weather near Bolton depot. 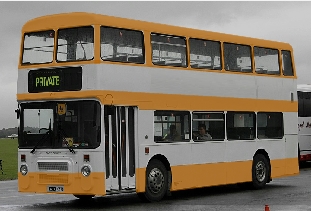 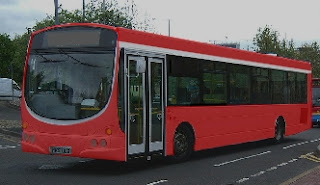 ... missing its town crest. Whilst undercover "at a depot not far from Glasgow" the Alexander's blue is revealed ...

... except that it's not quite the rich blue that it used to be. Put it down to poor lighting in the depot! Or cheapskate paint buying?

And we are still waiting to see how First's Olympic fleet will be presented.

fbb understands that all these "trial" liveries will be on the road today before 12 noon.

Special thanks to Ali Porlof who has tirelessly toured First's depots posing as a shapely but demure female bus spotter. As such a beast is very rare indeed (if not totally extinct!) she has been treated with consummate "politesse" rather than being offered the order of the boot! Thanks Alison.

** Purple People Eater (a creature that ate purple people, incidentally, not as in the busway, something purple that "eats" people) was an amusing little ditty sung by Sheb Wooley ... 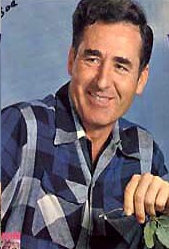 Not a lot of people know that. 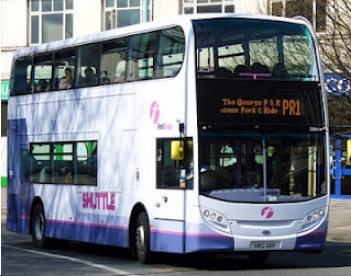 Refreshed on Plymouth park and ride?
Where is "Shuttle"?
Shottle is near Derby!
.

Next Blog : due Monday April 2nd