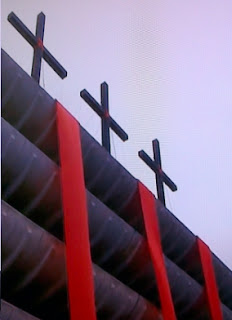 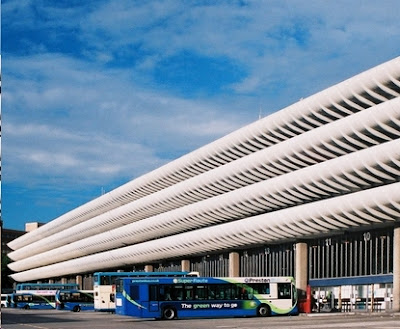 Built in the Brutalist architectural style between 1968 and 1969, designed by Keith Ingham and Charles Wilson of Building Design Partnership with E. H. Stazicker, it has 40 bus stands along each side of the building. Some claim that it is the second largest bus station in Western Europe. Pedestrian access to the Bus Station was through any of three subways, one of which links directly to the adjacent Guild Hall, while the design also incorporates a multi-storey car park of five floors with space for 1,100 cars. The distinctive curve of the car park balconies protect passengers from the worst of the weather by allowing buses to penetrate beneath the lower parking floor. 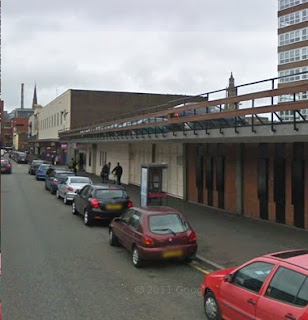 The building was threatened with demolition as part of the City Council's Tithebarn Street redevelopment project. Although the Tithebarn development has now collapsed, there are still proposals to demolish the bus station and replace it with a small interchange near the railway station.
.
The bus station is looking very tired. Only about half the 80 stands are used and signage is, at best, tatty. Note stand 6 (below) between 75 and 77. 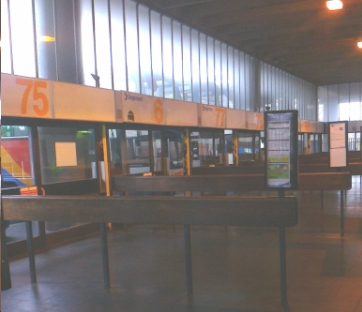 Information is plentiful but unhelpfully diffuse. The only guide to which bus leaves from where is on some small posters ... 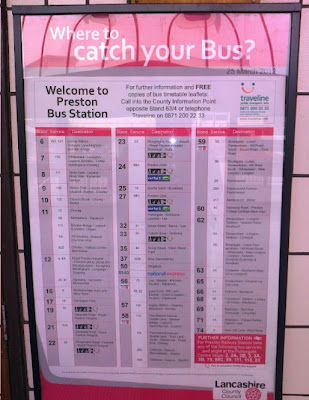 ... which list the information in stand number order, as in this extract:- 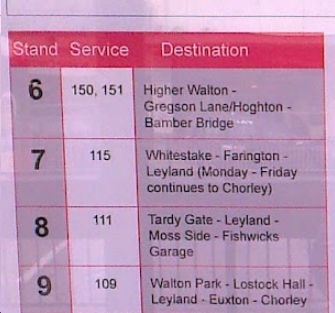 Surely an enquirer wants the data in bus route number order? fbb asked a helpful Stagecoach man who directed him swiftly to his required departure point. 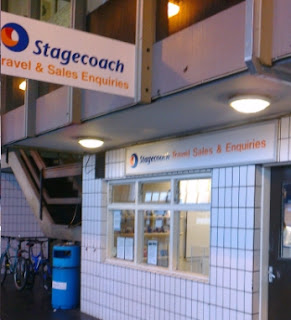 The Stagecoach offices appeared to have a full set of "their" leaflets, whilst the Lanacashire Council sort-of Tourist Information office had a selection of "theirs". 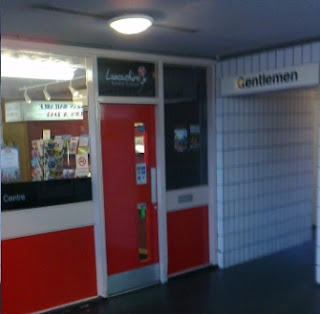 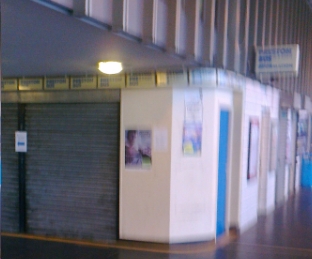 ... but there was a replacement round the corner which was depressingly open! 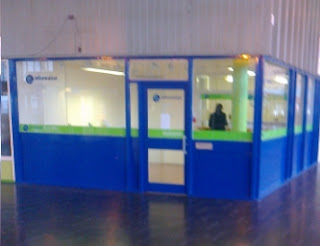 Inside was, well, not a lot. Two tiny racks of  leaflets covering just four out of their nineteen services. "The new ones are being printed. They should be here in two to three weeks." Perhaps Preston Bus might buy a photocopier? 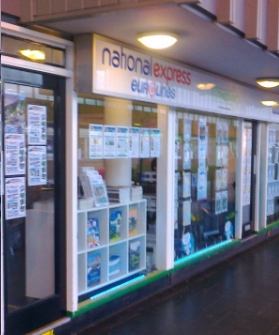 And the National Express outlet makes FOUR enquiry points in one bus station. Ever heard of a "one-stop" travel shop?

There is a good-sized cafe, un-sampled by fbb as his visit occurred soon after a "Full English" at the B&B. One joy, however, was indicative of Preston's people power. 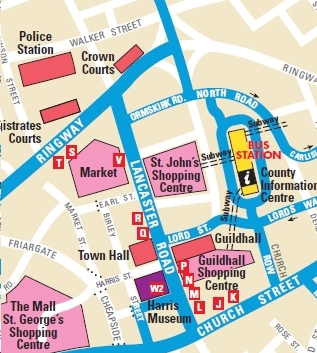 For years the "authorities" had struggled to "persuade" joe public to access the bus station via the dark, gloomy and smelly subways and for years Joseph et al had defied them by running suicidally in front of buses and road traffic in their desire for less a threatening ingress or egress. 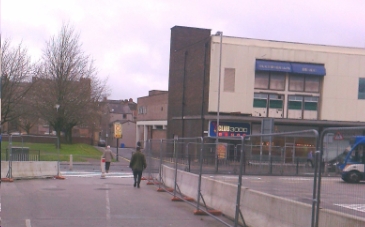 But a relatively recent development has been a couple of in-daylight walkways with pseudo pedestrian crossings over the bus access roads.

Power to the people, indeed! But more tatty barriers and fences.

Like Northampton's bus station, it would seem very sensible to upgrade the present facility with brighter lighting, better information and properly designed pedestrian routes (fill in the subways!). A fresh coat of paint would be nice. A single enquiry and sales office, more invitingly appointed than today's spartan tiled "public convenience" ambiance, might even encourage folk to travel by bus.

A few trees and flower beds dotted around outside and some potted plant filled planters inside would make a huge difference. 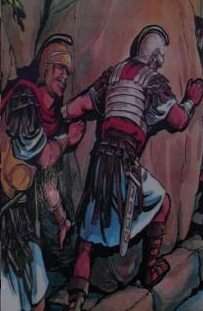 The burial was rushed and incomplete so that the Sabbath laws would not be compromised. And then, nothing happened for at least 24 hours.
Easter is the daftest possible name for the season. We owe its use to the 7th/8th century historian and monk, known as the Venomous Bede**, curiously named after a station on the Tyne and Wear Metro**. He wrote that "the pagan Saxons call this time of the year 'Eastor' after one of their Norse Goddesses".
But in all the varied literature of Norse-land, no such deity has even been identified.
How typical of we Brits, to name the most holy Christian season of the year after a non-existent pagan Norse God!
But on the Sabbath Saturday of the first so-called Easter weekend, nothing happened.
Until the women arrived at the tomb at dawn on the Sunday morning to finish the burial rituals.
** Notes:-
Venomous : not really, try "Venerable". "Venomous" was deliciously created by W C Sellar and R J Yateman in their excellent history book, "1066 and all that".
Tyne and Wear Metro : there is such a station, named after old Ven. 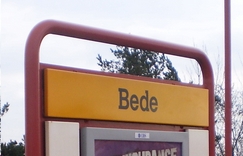 Easter Eggs and Easter Bunnies have their origins in Pagan rituals.
Many societies have a season name derived from Passover, i.e. Pâques (French), Pasqua (Italian) and Pascua (Spanish) : BUT Oster (German).
Easter Saturday is the Saturday after Easter Sunday; in 2012 it is 14th April, which happens to be fbb & Mrs fbb's 39th Wedding Anniversary. 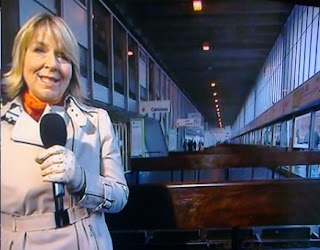