The news that First Bus was putting a brand new network in place in Southampton came as something of a shock. Traditionally First were always the harbinger of doom-laden cutbacks. Perhaps something of the Fearnley Factor may, at last, be foretelling a fruitful future for First.

At first sight, everything in Southampton changes on Sunday 29th April. From that auspicious date no First bus passenger will have the same times or route number. How will they cope, poor things? 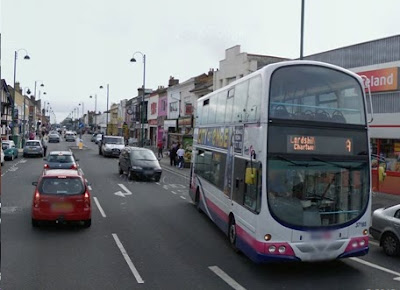 The majority of routes to the west of Southampton city centre leave via the railway station and trundle along Romsey Road, passing through the busy Shirley High Street. Then there are three major "traffic objectives". Huge post-war housing estates at Millbrook (so-called, but mostly in Redbridge and Maybush) and Lords Hill and the massive General Hospital ... 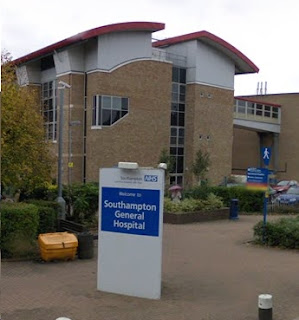 ... provide plenty of business for buses.

Here is the "old" network. 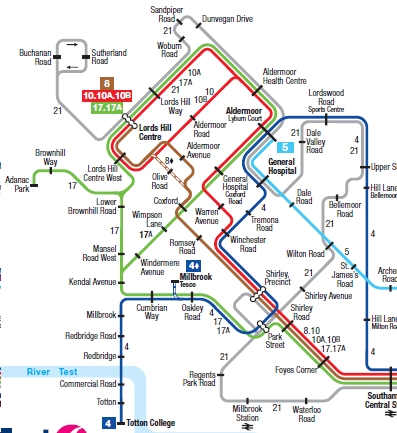 Upper Shirley routes
The 4 becomes the 10 with route change at the city end
The 5 becomes the 8 with several changes of route
The 21 becomes the S1 : no change of route

Millbrook Estate
The 17 and 17A become the 2 and 2A
with route changes in Lords Hill, no longer serving Adanac Park **
The big development is the X2, of which more below. 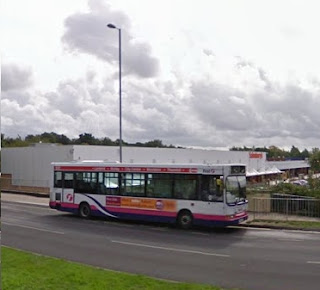 That, in summary, is the new network. Spot the difference? 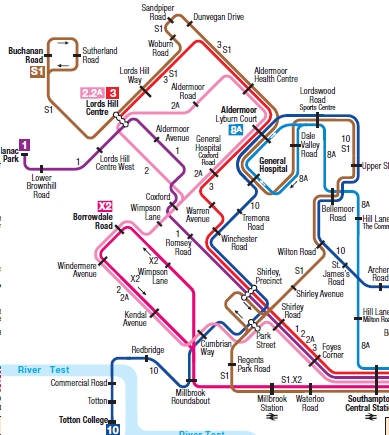 Which brings us back to the new X2. 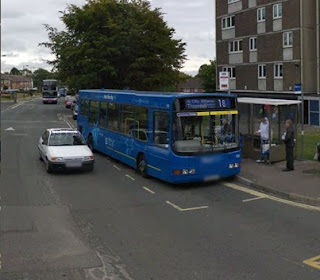 Under the current regime, the Millbrook Estate is served by the frequent 17 and 17A from First and the equally frequent 18 from Bluestar (formerly Solent Blueline, formerly Hampshire Bus, formerly Hants and Dorset, etc. etc.). The 17 and 17A become (roughly) the 2 and 2A and they are joined by a new route. It is named "The Millbrook Flyer" and time will tell whether the vehicles are so branded. 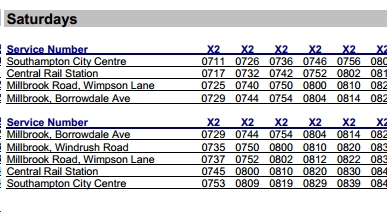 This runs via the Station and then via the fast (except when clogged at peak times!) and largely industrial Mountbatten Way and Millbrook Road ... 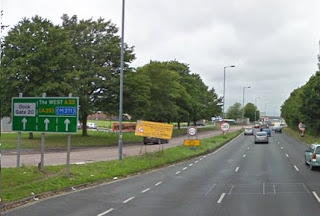 ... to provide an extra 6 buses an hour Monday to Saturday daytimes round the estate "loop", effectively doubling First's frequency and poking a speedy stick into the eye of Bluestar! There is no X2 in the evenings and only a token service for Sunday daytimes.
.
Will Bluestar respond elsewhere in the City?
.
Will Southampton residents be so confused that bicycle sales increase dramatically?
.
Will First get their printed publicity and roadside information right?

If First are to turn round their predicted poor performance nationally, their Hampshire team will need to get it right. This, apparently, is the first of many major First network revisions. It would appear to be a genuine and spirited effort to improve First's image; aimed, obviously, at generating new business. Transport observers and First's senior management will all hold their metaphorical breath and see what happens.
.
Once again, the intrepid and fearless fbb plans yet another outing to England on Monday 30th April to nosey around the new network. The excitement is almost unbearable!(?)

** Adanac Park:-
home of the Ordnance Survey which used to be at Maybush on the Romsey Road ... 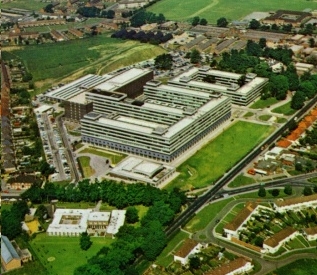 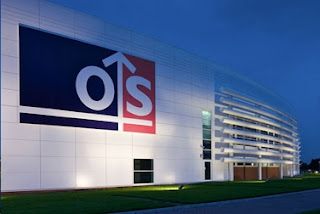 That's why the maps are so expensive!