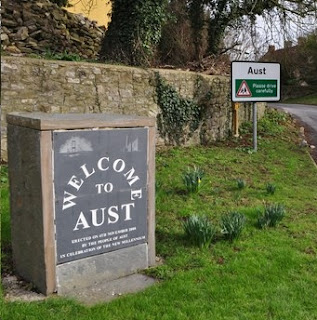 The pretty little village of Aust, formerly the name appended to the eastern slipway of the ferry across the Severn to Beachley and on to South Wales, orginally lay on the B4461, part of a road that ran from Severn Beach to Thornbury. But all that changed with the coming of the M4 and the Severn Road Bridge in 1966. 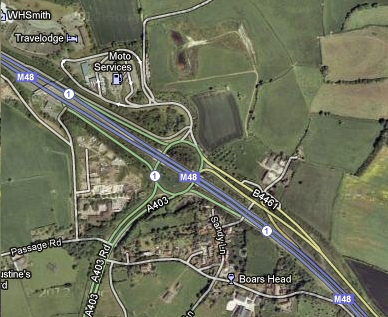 The original road through the village was blocked east of the Boar's Head pub ... 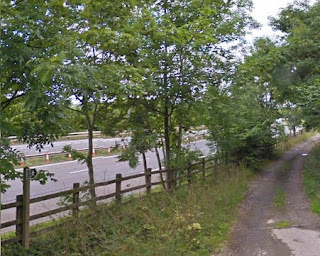 ... and a brand new bit of the B4461 was included in the complicated junction arrangements at the so called "Aust Interchange". From the south a (mostly) new road, the A403, was built to link Seven Beach (etc.) with the Motorway.

This left Aust as a "dead end" village signposted from the A403 on the approaches to the junction (Church tower in the background, behind the trees). 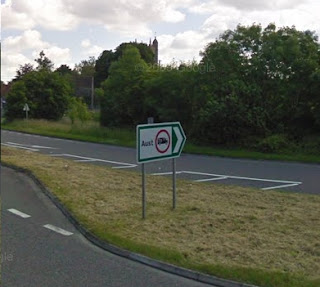 Perhaps a map extract will make it clearer? 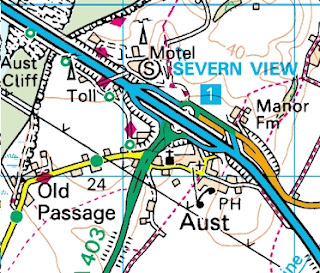 As an aside, this map shows the "yellow" road from the A403 into the village turning left at the Evangelical Church and disappearing under the junction. Does it, or doesn't it?

It does, but secretly! Here is that tunnel from the north side, running off the enhanced B4461 but not signposted and mysteriously shown as a no through road, which its isn't. 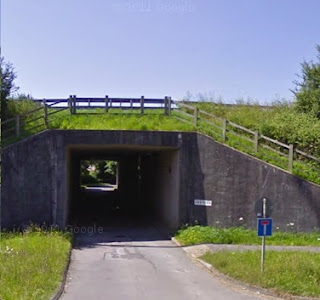 But back to the buses. With the introduction of the X14 group of routes (originally 300 and 301), Aust gained a superb almost hourly bus service which survives, untouched but for the loss of Sunday journeys, some 46 years later.

The timetable even offers a Monday to Friday commuter trip into Bristol, if you are happy to start work at 0800!

But where does it stop? Obviously it doesn't wiggle through the village like the Fridays only shoppers bus, route 614 between Severn Beach and Thornbury. 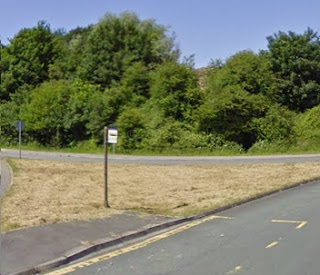 ... actually ON the roundabout. This is the stop on the south side of the junction for journeys to Chepstow and Newport, the "to Bristol" stop is accessed via a life-threatening perambulation of the junction round to the north side. 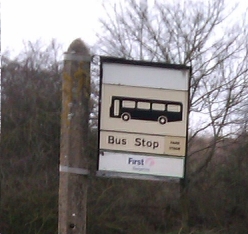 Note that there is no mention of Stagecoach, operators of half the service; there are no route numbers; there is no shelter; not even a bench on which to rest the weary limbs. So, if you know, if you are forced to go to Aust, if you live there and want to escape, carless, to the bright city lights; then you can do it every hour (roughly!).

Of course the stop is a legalistic halt to keep the service within the fuel tax rebate rules (now "bus operators' grant"), rather than a desire to improve the lot of the worthy residents of Aust. And the coaches do, indeed, drop down off the M48 (formerly M4) to drive past the stop ... 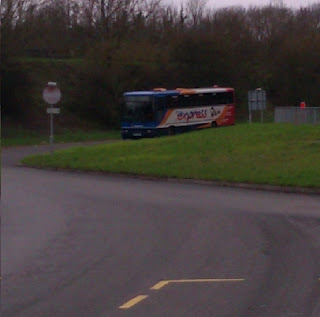 As a postcript, there are two intriguing signs at "Aust Interchange". Firstly ... 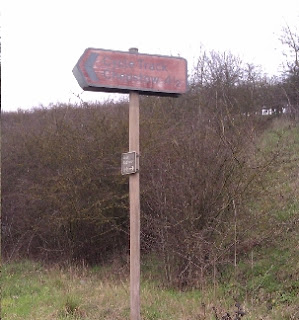 ... a clear direction to the footpath (?) and cycleway across the Severn Bridge. Then there is ... 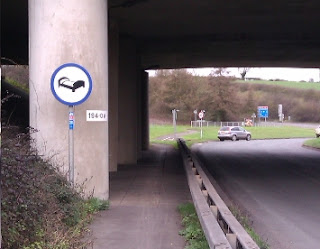 ... a place to doss down for the night, under the motorway; maybe not? More likely it is to guide the fearless footpath follower to Aust's hotel and shopping mall complex, namely ... 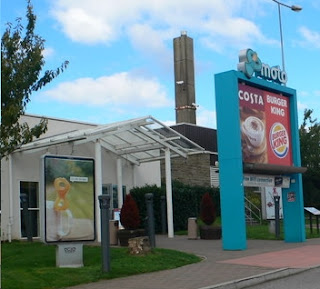 fbb is deeply indebted to blog reader and commentator, Paul Davies, who supplied much of the material for the "Pont Hafren" blogs and, showing no fears for life and liberty, actually took a ride on the X14 to Aust Interchange to collect the detailed photographs.

Such dedication brings a lump to your throat.

The ferry actually ran from the hamlet of "Old Passage", not Aust which is about one kilometre "inland". So was there a "New Passage"? Oh yes, indeedy. And more blogs to come!

Next Blog : due Monday April 16th
Posted by fatbusbloke at 06:49