That's the Wander at Westfield 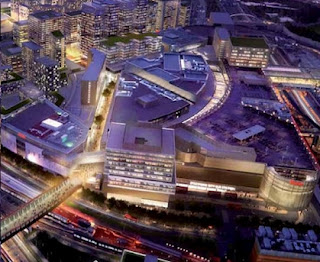 Good Morning Mr Phelps. Your mission, should you choose to accept it, is to find your way from Stratford bus station (just out of picture bottom left) to Stratford International Docklands Light Railway [DLR] Station which is ... erm ... somewhere else. 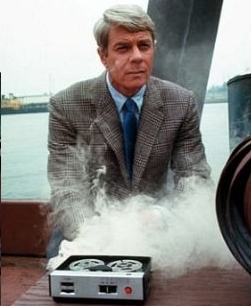 This tape will self destruct in five seconds.

Unfortunately neither Jim Phelps nor fbb (on a recent visit) had the benefit of either the aerial view or a map. So we start at the huge flight of steps that lead onto the new bridge over the railway line. 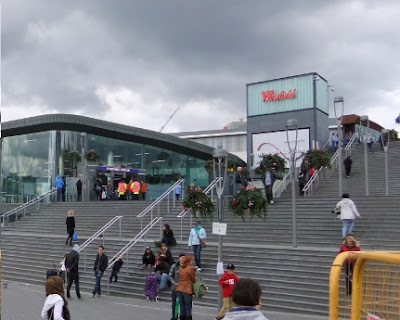 There are large glazed panels on the parapets which means that you have a good view of the whole station; a trainspotters paradise. 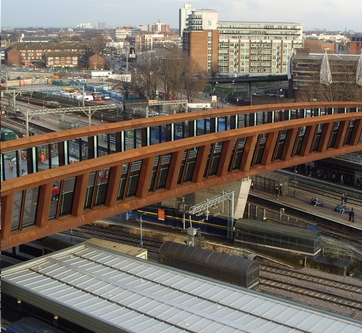 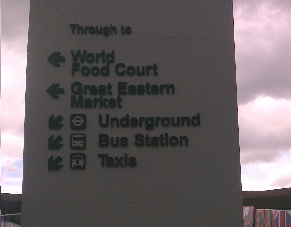 ... which takes you down, through the station subway and back to where you started. Failure!

But, there is hope; just a few yards further on is a very tall sign with very small print ... 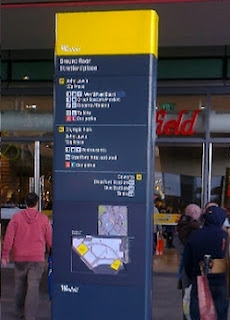 ... to Stratford International (sorry about the camera shake!); but still no actual mention of DLR. This seems to lead along "The Street" which is an unusual feature for an indoor shopping mall. It isn't indoors. 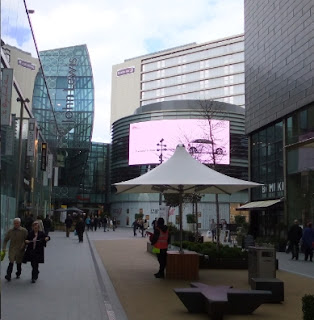 At the street junction, however, there was no sign to either DLR or Stratford International; but there was a man wearing large foam plastic "joke" hands ... 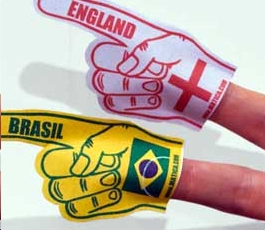 ... (something like these) directing people to something somewhere else. "Up there," he said, "and through the double doors." 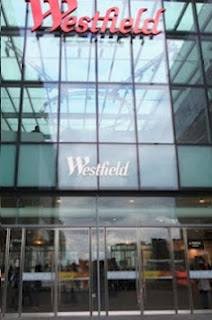 Now you were inside the inside bit of Westfield. Using "stab in the dark" technology fbb crossed the "mall" and immediately went outside again. There were no signs. And there, in all its spartan glory, down a huge flight of steps and across an open bit, was Stratford International station. 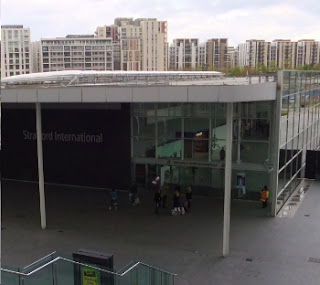 Now look carefully to the right of the right-hand tall pillar and the left of the orange jacket and what do you see? Not a lot! 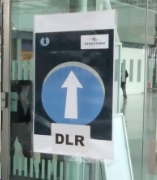 But there is an obvious and well designed paper poster (!) stuck on the glass which takes you into the International terminal building. And you keep going, gazing ever upwards, and you then espy ...

... in the gloom of the roof space a sign to "Way Out DLR"; and boy is it way out! So it is outside again and, at last, the holy grail is there; the crock of gold at the end of the rainbow; shargri-la.

Yes you have found the DLR International Station. 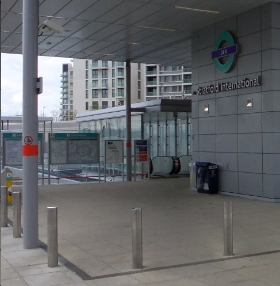 Now if this were France, or Germany or the Netherlands; all this would be part of one fully integrated public transport block; itself constructed as an integral part of the shopping centre. But, here in GB, everything is a separate company with rain-forest's worth of contractual paperwork and it's a wonder that Stratford International station isn't at Dagenham.

Before someone sends in a critical comment, fbb is fully aware that only a complete fruit cake would want to walk from Stratford (main) station all the way through Westfield shopping centre to catch a Docklands train that would pass back through Stratford (main) Station 2 minutes after departure. And yes, fbb is a bit of a fruit cake! 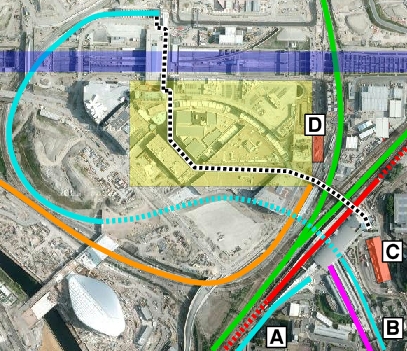 But, there only was one sign. What about folk who might want to catch the Javelin service to Kent? Or be thrilled with a high speed run into St Pancras? What about people who may want to enjoy the shopping experience and not walk all the way back before catching their train to West Ham?

Perhaps things were better in the "inside" mall? Of course, there did seem to be signs to the car parks.

It all makes fbb really, really glad that he lives on the Isle of Wight where the total number of escalators is ... 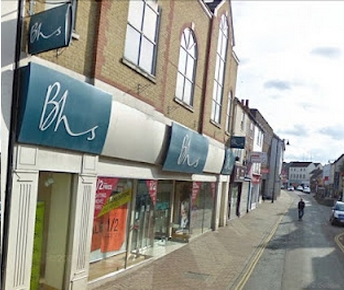 ... ONE: here at British Home Stores on the busy Newport High Street.

A look at the Stratford bus stations is postponed. Just the thought of Westfield is too exhausting. And thanks again to Alan, long suffering side-kick, for some more snaps.
.