We all refer to the London Underground "diagram" as "iconic" and it is true that Harry Beck's creation set the trend for many Metro systems worldwide. But, although the concept of the diagram has remained with us since Harry started it, the designer and designer has changed.

In 1958, Underground published what would turn our to be Beck's last version. He thought it was his best, but, apparently, LT and many users did not agree. (most of the following can be enlarged with a mouse click). 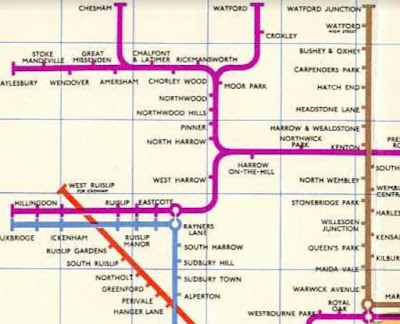 Very few diagonals remained (as here with the Central Line). But the sharp right angled corners at Rayners Lane (BLUE and PURPLE) and Paddington (bottom right, (BROWN and PURPLE) were ugly and stretched realism beyond breaking point!

Talking of diagonals, Becks has experimented with a 60 degree slope  ... 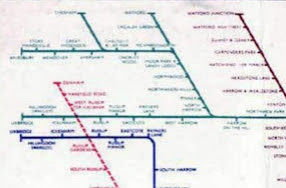 ... which, surprisingly, worked quite well but was never published. Beck was then sidelined by LTs publicity boss, Harold Hutrchinson who designed his own version. It had sharp angles everywhere ... 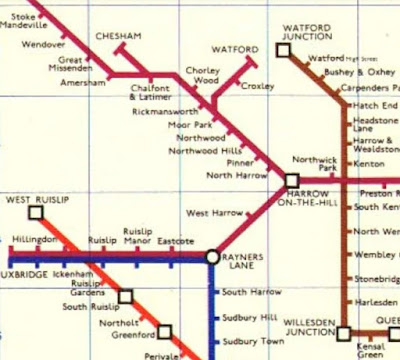 ... and looked ugly by comparison. The Metropolitan line has unnecessary zigs and zags, as did the District Line to the east of the metropolis. 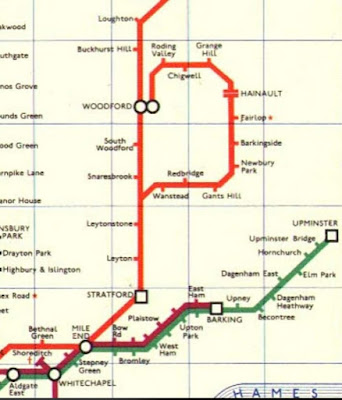 The area round Whitechapel (bottom left) was awful. One reason for this poor, but new, design was to make way for the soon-to-be-opened Victoria Line.

Beck submitted his suggestion which was such a magnificent and genius plan that it deserved to be adopted ... 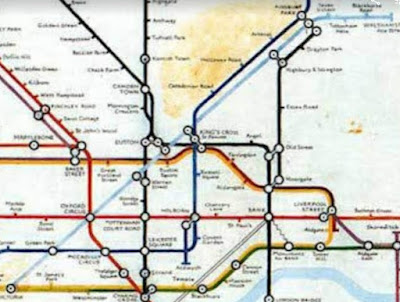 ... a dead straight diagonal from Finsbury Park to Victoria. Brilliant! O.K.,the doomed Aldwych branch is poor but that would have been adjusted in due course.

It was no surprise that Paul Garbutt replaced Hutchinson and then returned to a more Beckish design. 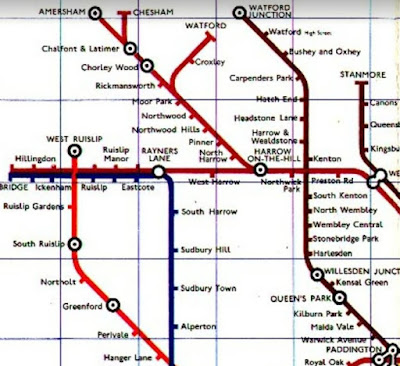 fbb has suggested that now is the time for a rethink with a possible answer to have a detailed central London plan surrounded by a more geographic representation of Underground, Overground and National Rail lines "outside the central box".

A comprehensive of line names and colours is badly needed to overcome the growing complexity of the Overground and please, please, please included the core Thameslink route across London.

Hengrove Depot P.S.
Is this the most uninspiring bus terminus in the UK? 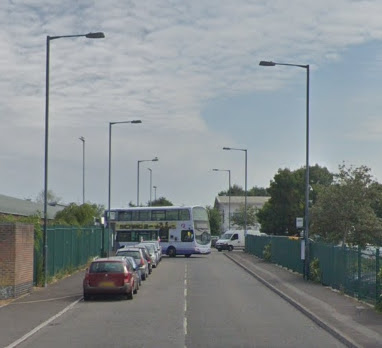 The bus is exiting Hengrove Depot in south Bristol. 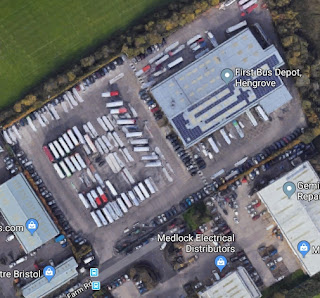 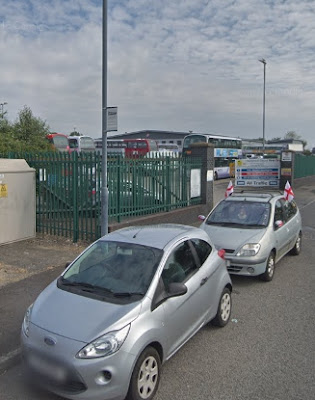 ... and on the right is the pick-up stop. It has departure lists for the services that use it. 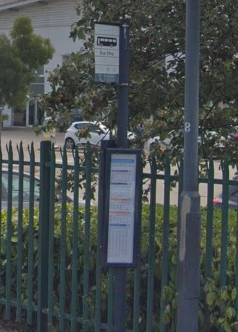 This unprepossessing facility is served by six routes... 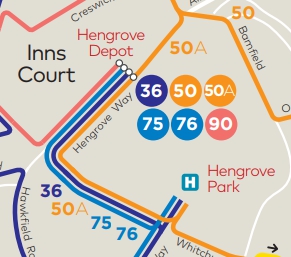 It would form an excellent place for First Bus bus spotting with 40 movements every hour (20 out and 20 in). When fbb question whether there wqould be huge passenger numbers here, he was criticised by an anonymous.

Of course,the buses go there for "operational reasons", staff change-overs etc. and NOT to serve up to 1200 passengers an hour. fbb guesses an average of less than 1 per bus!

But a fascinating place, no less. For the average bus nut, however, it does need a shelter and a bench. Adequate sustenance is available at the nearby Esso petrol station ... 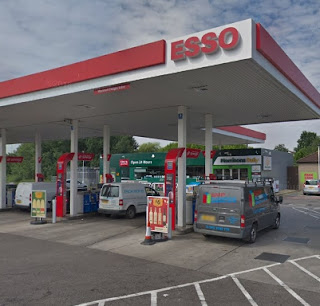 ... passed by all terminating vehicles, so you need not miss a thing!

Maybe a charger point for the lap top is also needed? Bus spotters no longer have notebooks. 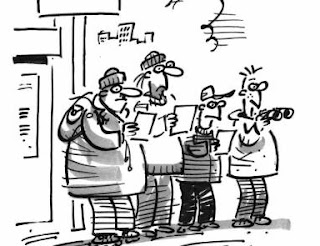 It is all about i-pads and the like!
-o-o-o-o-o-o-o-o-o-o-o-
ADVENT CALENDAR 24
What does modern man make of Angels? The visitation of the shepherds is well known. 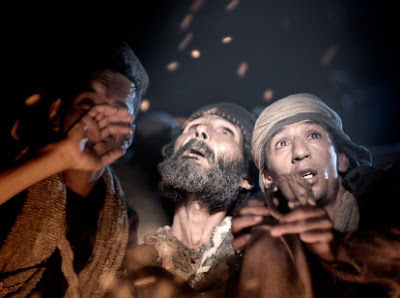 Unless we chicken out and suggest (with no good reason!) that the whole story is pure fabrication, you would have to admit that something very unusual must have happened to scare these harden men of the field.

But what was it? Who was it? 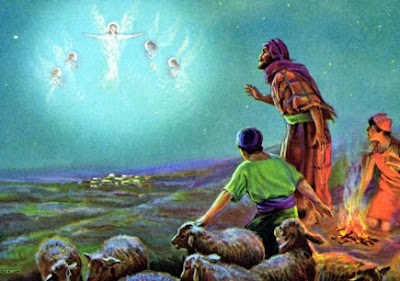 Floating diaphanous humanoids with wings? That would be scary!

Or a massive outpouring of supernatural power and light in a semi-human form? 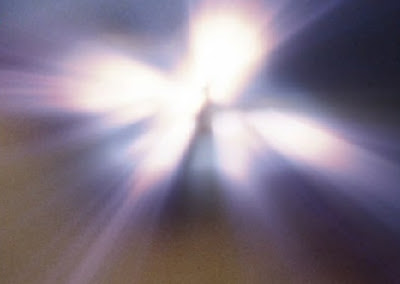 That would be even more scary! In the end we cannot double guess. Double guessing is a waste of time because if God exists (obviously your author has no doubts) he can do what he want with space, time, light and sound.

Whatever, "the glory of the Lord" shone all over them; power, light and sound.

But it's the result of the visitation that is most convincing.

“Don't be afraid!" said the angel, "I am here with good news for you, which will bring great joy to all the people. This very day in David's town your Saviour was born - Christ the Lord! And this is what will prove it to you: you will find a baby wrapped in cloths and lying in a manger.”

These hard men LEFT THEIR FLOCK and toddled off to visit a baby. Leaving their flocks would have likely lost them their job - for a baby? A baby who would be a Saviour?

It is the plain daftness of their response that makes the story convincing.

Whatever "an angel" was. 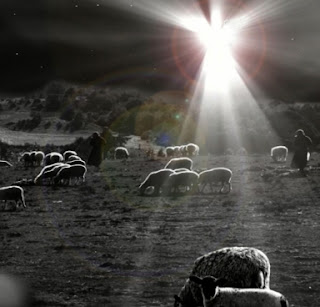