The weekend was based in the Premier Inn at Lake, Isle of Wight - very pleasant! 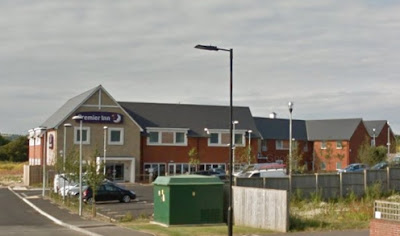 But what did fbb espy in a rack near the deception desk? 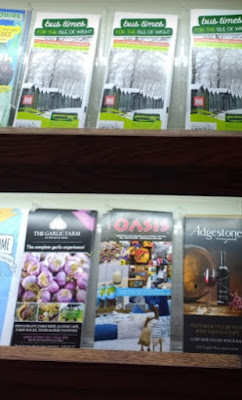 Did fbb's weary eyes deceive him? No they did not. Here were copies of the current Southern Vectis timetable book. 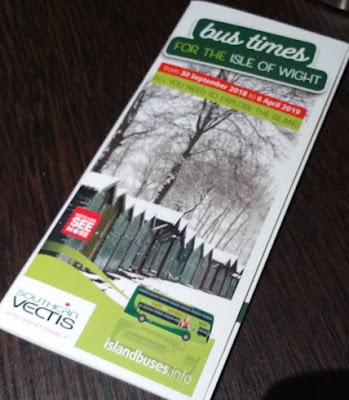 Now this is, indeed, something of a novelty - a bus company placing its key publicity in places where visitors might pick it up and use the buses.

Of course it is a lot easier if you publish a timetable book but where the area is too big to do that, a good map, fares information and a frequency guide is better than nothing.

What A Jolly Bad Idea (1)
What does this display tell you, the anxious passenger, planning to travel on Sunday 2nd December?

It tells fbb that you are in for a long bus ride from Ashford International to London Victoria because the latter is closed.

This Sunday, there will be no Southeastern trains from London Victoria.

Services will run from Blackfriars, Charing Cross or Cannon Street instead of Victoria.

You will be able to use your ticket at no extra cost on Underground services between Brixton, Victoria, Charing Cross, Cannon Street  Waterloo, Southwark, Elephant & Castle & Blackfriars.

Yep. Victoria was, indeed, closed but TRAINS were running to other London termini. Buses, however, WERE be running; but in the opposite direction, from Ashford to Canterbury West and Margate ... 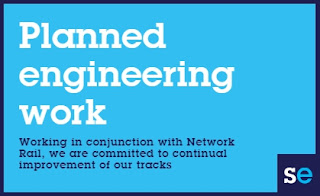 So committed are South Eastern that there were no timetables on line or in printed form. Yes, the Journey Planner would show you one particular journey at a time - but of only limited use if you want to consider other options.

Correspondent Dave offers his view as a local train user:- 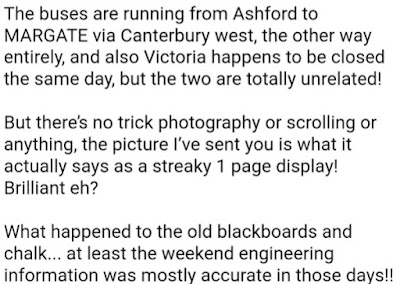 What A Jolly Bad Idea (2)
Noel Edmonds has stirred things up a bit in Bristol ... 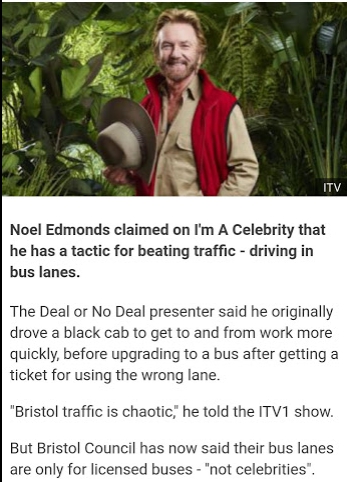 What is, or is not allowed in bus lanes varies nationally; a situation which is not at all helpful. It would appear that buses actually running on service (plus cycles and genuine taxis) are all that is allowed in Bristol. But in London ... 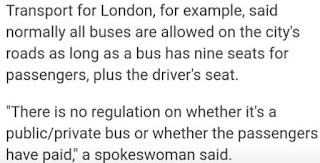 Bearing in mind the appalling congestion that is challenging First Bus in the city, it is hard to see how Noel at the wheel of a Routemaster is going to get anywhere very fast.

A bit of PR nonsense?

What A Jolly Good Idea (2)
James Freeman, boos of First Bristol, has announced what the company intends to do to try and compensate for the horrendous traffic in the city. As Christmas approaches it is reasonable to assume that more cars will clog the roads and more passengers will want to use the bus to do their Christmas shopping.

It is a double whammy! 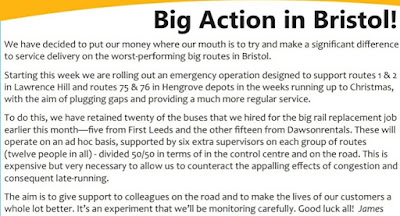 ... as announced in the Firsdt Bus staff newsletter. You can click on the graphic to enlarge it; but, if that proves impracticable, here is a summary.

Twenty extra buses (five from Leeds, 15 from Dawsonrentals)
Six extra supervisors EACH on 1/2 and 75/6 (12 in all)
divided between on-street and in the control centre

This is very expensive but very necessary to allow is to counteract the appalling effects of congestion.

So much better a response than the usual "there aint nuffin we can do mate."

What A Jolly Good Idea - Perhaps?
300 signs are going up all over London to warn folk of an impending restriction. 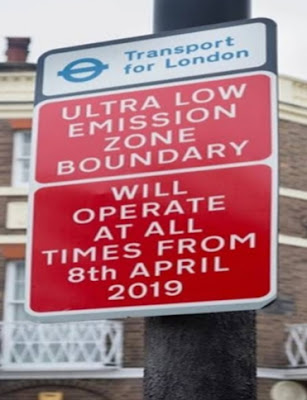 The ULEZ zone will start off by having similar area to the congestion charge. 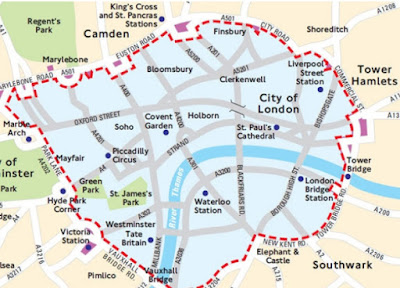 The scheme means that if your vehicle does NOT comply with the ULEZ emissions standards you will have to pay a fee. This is IN ADDITION to the congestion charge but will replace the present T-Charge (for emissions).

In 2021, the fee will apply to every vehicle within the North and South Circular roads.

As fbb drives a dreaded death-delivering diesel car, he had better keep very quiet indeed.
-o-o-o-o-o-o-o-o-o-o-o-
ADVENT CALENDAR 3
It doesn't take much knowledge of Church History to guess that this bod is a representation of Saint Nicholas. 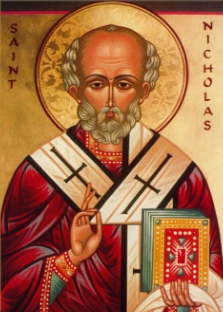 Very little is known about the historical Saint Nicholas. The earliest accounts of his life were written centuries after his death and contain many legendary elaborations. He is said to have been born in Patara, Lycia in Asia Minor to wealthy Christian parents. In one of the earliest attested and most famous incidents from his life, he is said to have rescued three girls from being forced into prostitution by dropping a sack of gold coins through the window of their house each night for three nights so their father could pay a dowry for each of them.

So not much about dropping down chimneys, swigging sherry, riding a sleigh and giving presents to all children!

What is even worse, his "Saints Day" is December 6th - so absolutely NOTHING to do with CHRISTmas.

Saint Nicholas was jazzed up as Sinterklaas in the Netherlands ... 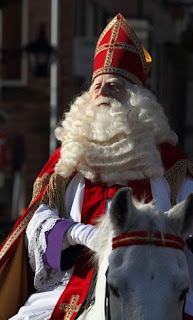 ... and made his way (virtually) to the USA with Dutch immigrants and sort-of emerged as Santa Claus. Sinterklaas rides on a horse, not a sleigh and has one or two assistants (NOT gnomes), one ominously called Black Pete.

Of course, there is one specific gift at the centre of CHRISTmas.

The Old Testament prophet Isaiah was quite clear about God's future gift to mankind.


A child is born to us!
A son is given to us!
And he will be our ruler.
He will be called,
"Wonderful,
Counsellor,
Mighty God,
Prince of Peace"