A Bus Ride For The Brave?

fbb can't wait for Monday 7th January when First's service changes happen in their sumptuous totality. In particular he would just love to ride on service U3. 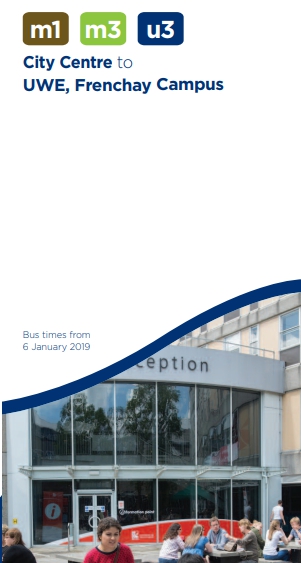 This provides an additional daytime service for the study-thirsty students and admin-weary staff at the University of the West of England (UWE).

In their blurb, First tells us that the U3 is not a Metrobus service so cannot use the buses only interchange road with the M32. Sadly, we are not told why, but whatever the reason, it is potty!

Anyway there is a useful map on the leaflet as illustrated above. The U3 whizzes up the M32 and takes the Filton "off ramp"... 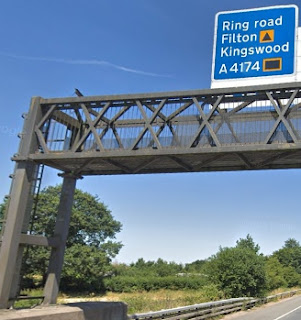 ... but before reaching the roundabout, it plunges into some undergrowth here on the left and down the side of the embankment. 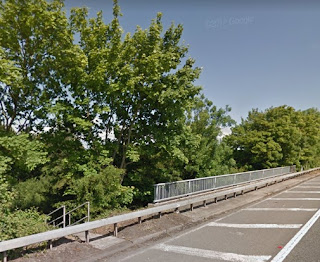 Bursting out from the trees on the right ... 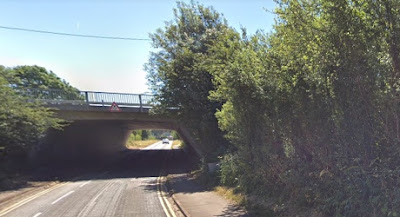 ... the route now follows the old Filton Road to UWE. 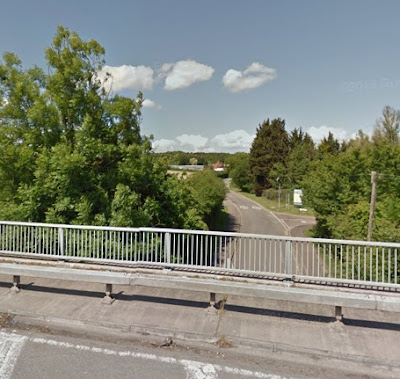 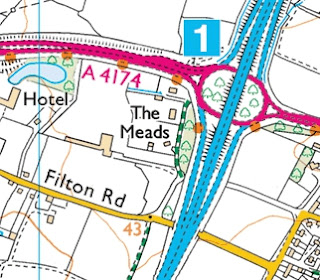 And great fun, surely compensating for the unnecessary extra journey time because it can't use the bus only junction! 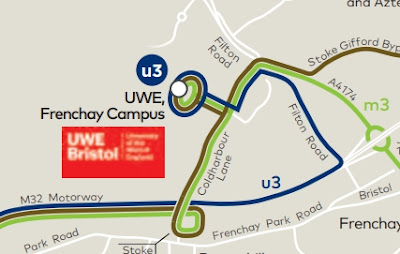 But, hey ho, it might just be a mistake. Boo, Hiss! Another map shows the U3 differently. 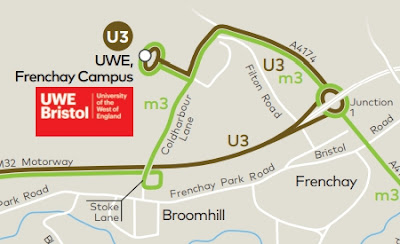 Perhaps not worth a hurriedly planned trip from Seaton to the far north, then?

Centralisation Success?
A rail operating centre (ROC) is a building that houses all signallers, signalling equipment, ancillaries and operators for a specific region or route on the United Kingdom's main rail network. The ROC supplants the work of several other signal boxes which have thus become redundant. Network Rail announced the creation of fourteen. 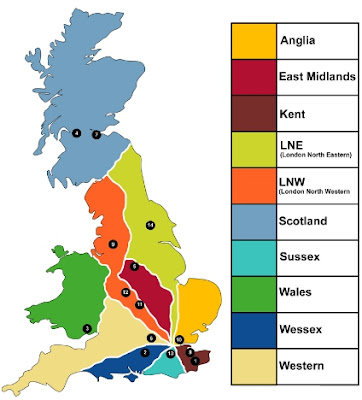 This number has since been reduced.

One in Kent is at Ashford. Out are rows and rows of signal levers and in are bods at terminals looking at computer screens. They never see the trains! 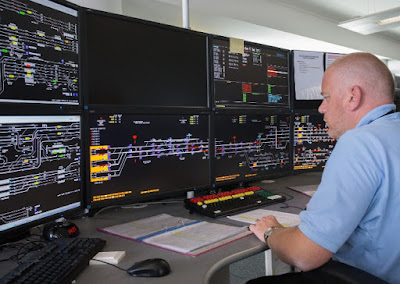 And they control lots of bits of railway over a very wide area.

Thus it was that on Thursday evening the Kent Fire Brigade was called to a conflagration in an electricity sub station near the Ashford signal box. 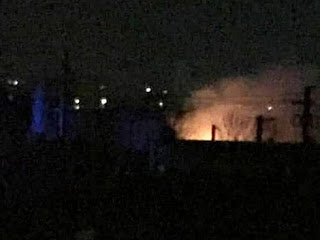 As a precaution, Ashford signalling centre was evacuated. The consequences were obvious. 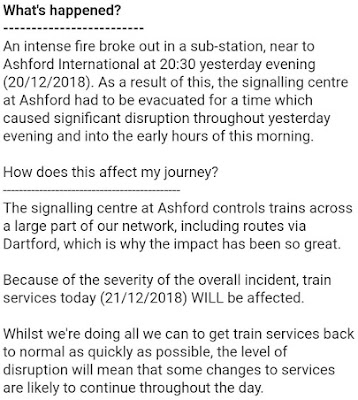 What a splendid idea; concentrate ALL your signalling in just one building, don't build in any back-up and then reap the consequences when that building goes down!

Something about baskets where all the eggs are stowed?

We Do It Differently Today
Remember fbb wallowing in nostalgia about the Triang Minic Motorway system ... 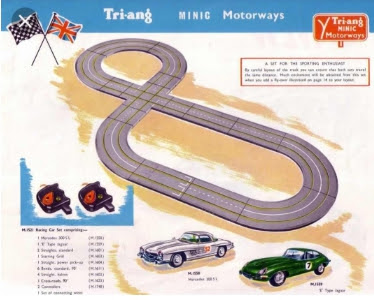 ... an OO version of slot car racing, but with ordinary road vehicles available? 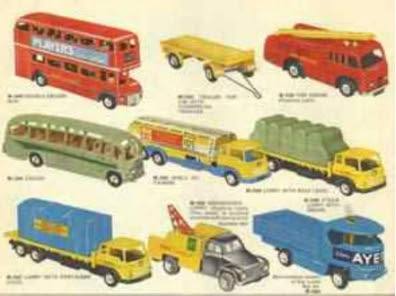 The modern version of this is produced by German company Faller. The vehicles have a battery on board and follow a wire embedded on the roadway. 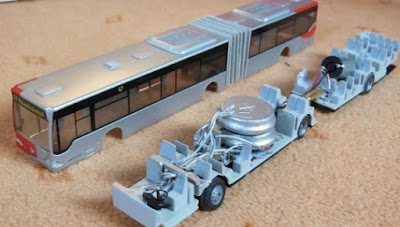 Impressive, clever and expensive. Now UK retailer Gaugemaster (based at Ford in Hampshire) is selling a UK-badged version as a starter set. 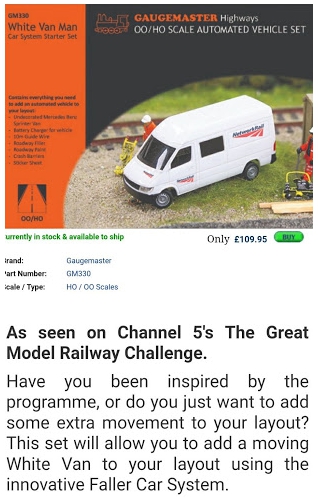 Is the Network Rail van crew any good at sorting out signalling centres?

And at that price, no, fbb isn't buying! It would never survive outdoors.

-o-o-o-o-o-o-o-o-o-o-o-
ADVENT CALENDAR 22
We all know the story. Mary (on the non-existent donkey) arrives with Joseph at the inn and there is no room - fully booked at Christmas! O.K. fully booked because of yet another bit of over zealous Roman bureaucracy.

So a very pregnant Mary and her devoted hubby (except they ain't wed, yet) are shoved unceremoniously into a smelly cattle shed, a stable or a cave - depending on your personal preference.

We all know the story.

Except that we don't. Here is what Gospel writer Luke actually says.

Joseph went from the town of Nazareth in Galilee to the town of Bethlehem in Judea, the birthplace of King David. Joseph went there because he was a descendant of David. He went to register with Mary, who was promised in marriage to him. She was pregnant, and while they were in Bethlehem, the time came for her to have her baby. 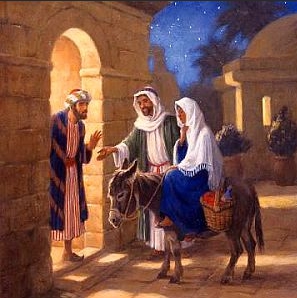 She gave birth to her first son, wrapped him in cloths and laid him in a manger - there was no room for them to stay in the inn.

This has puzzled many for for nearly two centuries. People in the East are genetically unable to be anything but welcoming to guests - it is compulsory! It is inconceivable that anyone would turn away a pregnant woman or offer low-grade accommodation.

The Eastern innkeeper would willingly sacrifice his own bed and sleep under the stars rather than see Mary in distress.

But what if it wasn't an inn at all? Modern archaeology reveals what a medium-sized house would look like back in those Biblical days. 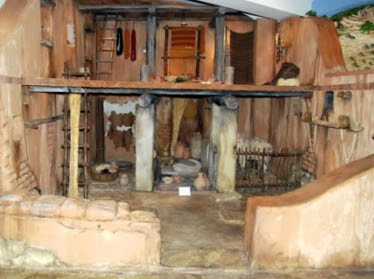 This model shows the front wall removed to reveal the interior. Stairs were only for the wealthy, for ordinary mortals a ladder was cheap and efficacious.

Upstairs; living and sleeping areas, downstairs laundry, storage and a pen for the animals. A one storey house would have similar facilities on one level.

The Greek word used here for "inn" does not, apparently, refer to a commercial property, more "a place for guests".

So Mary was not turfed out; the cow was pushed outside somewhere, and the "cattle shed" turned into a guest room, because the rest of the house was full and Mary would need a little privacy as her confinement came to its satisfactory conclusion.

It fits. It makes sense all round.

Of course, the detail is largely irrelevant; it's the fact of the Nativity that matters. Luke wasn't bothered by what for him would have been very obvious normality.

But, somehow, with this re-working, CHRISTmas then becomes realistic and believable, not ludicrous and fake! 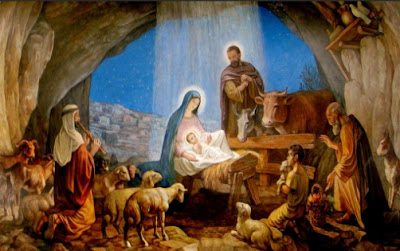 Welcome to Bethlehem's urban zoo complete with powerful floodlights and some form of force-field headgear! Musical entertainment as well!