Sunday January 6th seems to be the date of choice for bus service changes. The revised networks in Northamptonshire all start on that day (although due to the paucity of Sunday services most will happen on the following Monday). Stagecoach is "tweaking" (?) in Basingstoke but fbb is keeping an eye on Bristol. 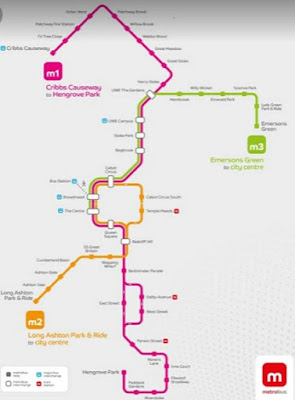 The final piece of the much maligned Metro is delivered. The services have appeared in reverse numerical order.

The First was M3 (GREEN), using the highly expensive buses only interchange on the M32 ... 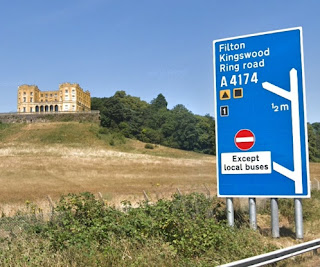 ... to serve the University of the West  of England then continuing through "green fields" to the developing Lyde Green area. The building on the hill is the Dower House.

The Dower House, Stoke Park is a building in Bristol, England. It is one Bristol's more prominent landmarks, set on Purdown, a hill above the M32 motorway on the main approach into the city, and painted yellow.

The house was built in 1553 by Sir Richard Berkeley. Rebuilt by Norborne Berkeley, 4th Baron Botetourt circa 1760, it eventually became used as a dower house by the Dukes of Beaufort at nearby Badminton House.

Its history in modern times has been diverse, but in 2004 is was converted into "highly desirable" apartments. The grounds are a public open space.

Next came the M2 (ORANGE), effectively a rerouting of the long-standing Long Ashton Park and Ride service. Huge amounts of money have been spent on a massive flyover ... 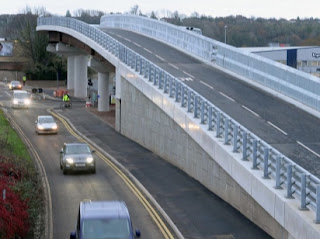 ... and a really crackpot busway.  This only has guide rails on the straight bits  ... 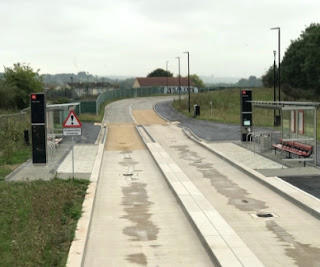 ... which means drivers have to slow down to leave the short guided bits, then slow down again to join the next chunk. Farcical.

The local press has just revealed yet another piece of almost laughable news about the M2 ... 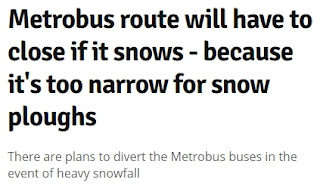 ...which, if it is true, begs the question; how do the other busways (Cambridge, Leigh in particular) manage?

In January (and running very late) M1 (PINK)  begins. It was featured in this week's First Bus staff newsletter with a picture ... 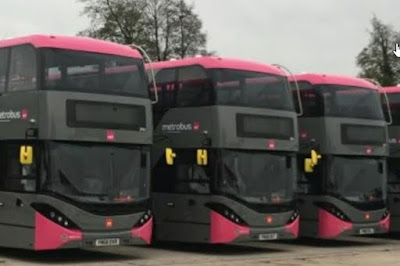 ... and a brief announcement. 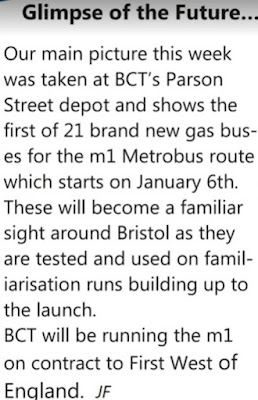 Bristol Community Transport is Bristol's largest community transport operator and a part of leading transport social enterprise HCT Group. From our depot in Parson Street, Bedminster we help our community to get out and about - providing mainstream bus services, minibuses for community groups, Dial-a-Ride, community bus services, community car services and more.

HCT Group? Hackney Community Transport which had rather a distinctive livery for its many London operations ... 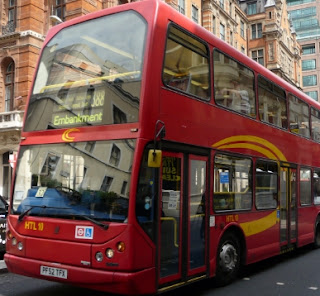 ... until Transport for London decreed that "red" meant "all read and no exceptions"- unless, of course, TfL want to make mega-bucks from all over advertising! 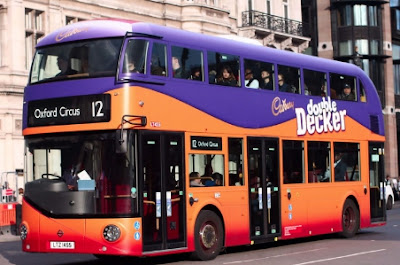 Here endeth the fbb grump of the day!

Its chief executive, Dai Powell, joined the social enterprise as a bus cleaner.

It is beyond the wit of an ordinary mortal like the chubby one to understand who gets what out of this deal. As far as the public is concerned M1 is a First Bus route; the buses are in First's livery (poor, but dictated by the Metrobus "bosses") with their logo, although the obvious "brand" is "metrobus". 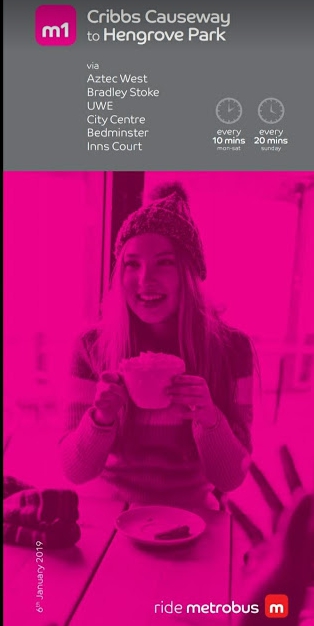 Whatever the practicalities and "politics" this is a First Bus route (as First won the contract to operate the whole network) but run for them by BCT.

Tomorrow we will look at the M1 (m1?) service itself and later, as information begins to dribble through to the bus-riding general public, at the implications for other routes in the M1 area. There are many consequent changes.

But, from January 6th you can ride "the long way round" from Hengrove Park to Cribbs Causeway for a modest £2.07 on your "contactless" bank card; £4 return on an all-day "rover"

But In Seaton ...
Also on Sunday January 6th, fbb and Mrs start a new project aimed at "older" people living in the various blocks of flats and warden assisted apartments along their local roads. It too has a distinctive brand! 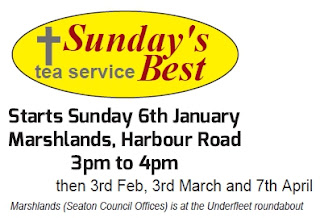 A mixture of a Christian meeting (call it a "service" if you wish) with afternoon tea. Which is another reason, combined with Christmas Services at Church and family commitments, why blogging efforts may be curtailed! The engines will not take it cap'n! 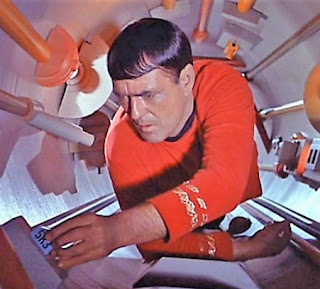 -o-o-o-o-o-o-o-o-o-o-o-
ADVENT CALENDAR 18
Inevitably, longing for light, the light and warmth of spring, was a big feature of the midwinter pagan festivals which were sort-of adopted and adapted by Christianity as a result of the arbitrary choice of date for the celebration.

The Bible begins with Light (Genesis Chapter 1), as did the "big bang" version of our distant origin. 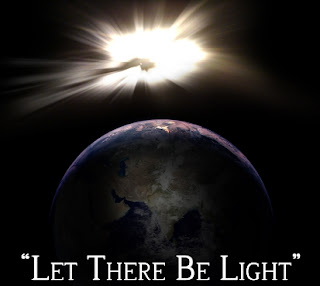 The Old Testament prophets "saw" the "light of God's Presence" occupy the Temple in Jerusalem ... 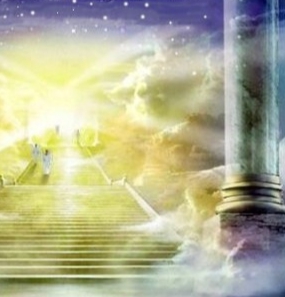 ... and "saw" His "glory" depart when the people failed to obey and repent of their wrong doing. Isaiah prophesied that God would send his light TO the world. (famous Christmas reading!).

The Magi followed "a star", the light of God guiding them to Bethlehem.

John's Gospel begins, not with the Nativity, but with the "light" that the darkness of the world will never extinguish. And, later:-

Jesus spoke to the Pharisees again. “I am the light of the world,” he said. “Whoever follows me will have the light of life and will never walk in darkness.” (John Chapter 8 verse 12). Hence Holman Hunt's picture ... 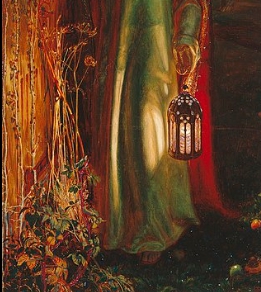 ... and the last book of the Bible reinforces the concept of God as eternal light.

The throne of God and of the Lamb (Jesus!) will be in the city, and his servants will worship him. They will see his face, and his name will be written on their foreheads. There shall be no more night, and they will not need lamps or sunlight, because the Lord God will be their light, and they will rule as kings forever and ever.

Whether factual or philosophical, it sounds a jolly good deal.

And it begins at CHRISTmas ...

... which is why the fbbs display a gurt big star on the front of their palatial residence! Light's pagan "origins" can happily be replaced, at least in the mind of the bill-payer, by something far more meaningful.

next Bristol blog : Wednesday 19th December
Posted by fatbusbloke at 02:00