Feeding The Body And The Mind

Yesterday, fbb and Mrs took a short drive into Tywyn (which we used to call Towyn when fbb were a lad) to replenish family comestibles whist the younger set was riding mountain bikes round a lethal course at Coed-y-Brenin Forest Park. 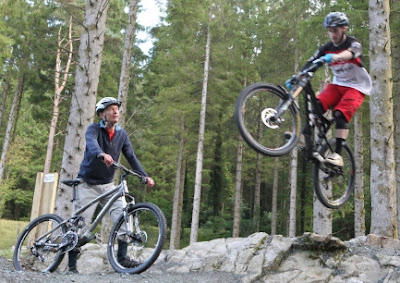 This hiatus in the seasonal jollity of patronising and amusing comments about old age and ineptitude at almost anything gave the oldies a chance to spy out the location for family Sunday lunch in a caff.

It is in the old Market Hall, the aged ones were told. From memory this didn't seem too attractive ... 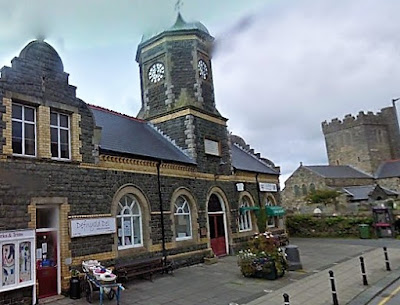 But Streetview was out-of-date and in reality things looked more promising.

There he found a Christmas gift (from fbb to fbb) for a modest £2. 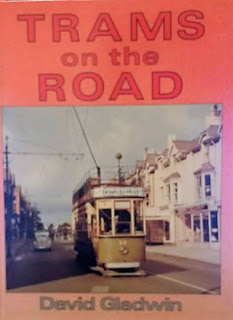 Published in 1990 it includes a reasonable but general introduction to trans and their UK history. Mr Gladwin has then published a wide selection of pictures offering a delicious pot-pourri of reminiscences from systems throughout the British Isles.

What enhances the "mixed bag" content are pictures of service vehicles which do not always figure in modern tram "albums". The illustration of a Manchester parcels van was new to fbb. 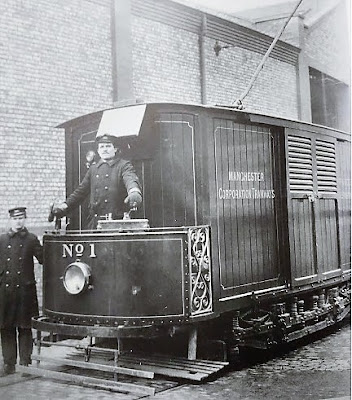 But it was a picture on the back cover that persuaded fbb to part with a whole £2. 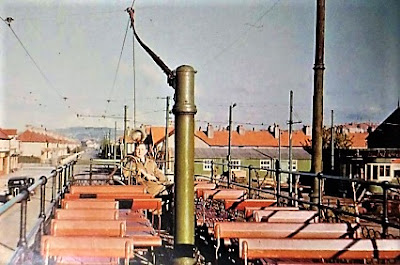 Your author's first ever tram ride was from Colwyn Bay to Llandudno as above but on a grey and miserable evening enjoyed on a family holiday. fbb was 3! And the tram pole came off the electric string, prompting an athletic conductor to shim up the trolley and, using astounding physical skill, wiggle himself and the pole back into pole position.

But back to the book. One enjoyable activity is to try to find the present day location of some ancient pictures. Fitzalan Square in Sheffield was easy ... 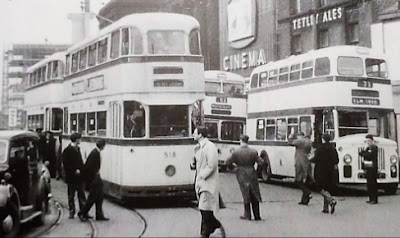 ... but only the Tetley's pub frontage is recognisable today. 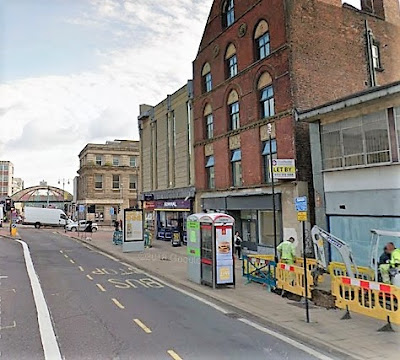 Butts Island in Rochdale was a popular meeting place ... 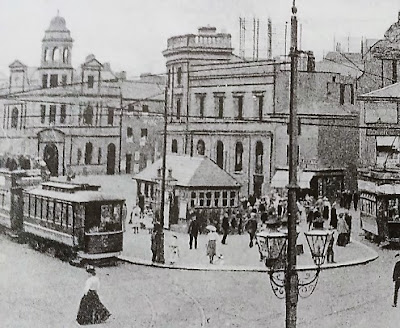 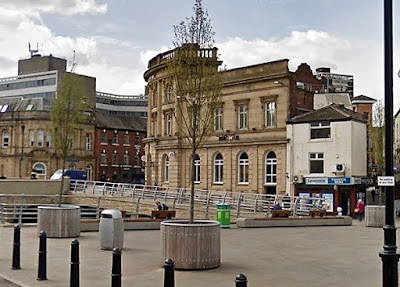 The building on the far left has lost some of its upper embellishments but the terrace next door still exists. 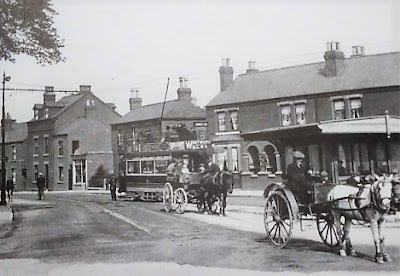 The main road linking with the A1M passes this way now ... 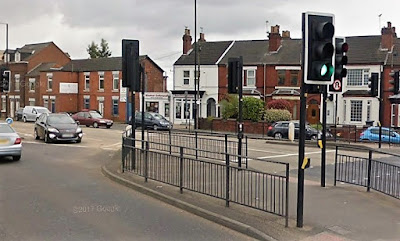 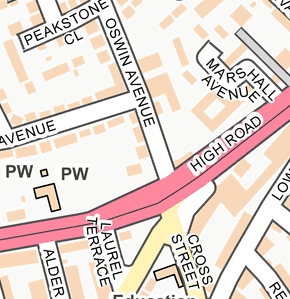 On the other side of town we see a party of the great and good about to cross North Bridge after its rebuilding. 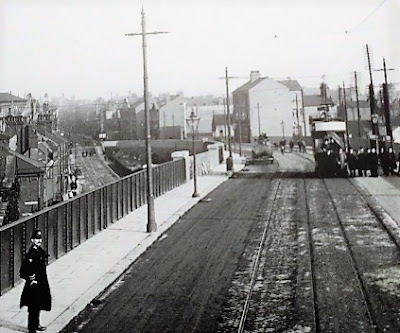 Behind the policeman were steps down to the "old" road (now Marsh Gate) where a small bus station for West Riding services was located. 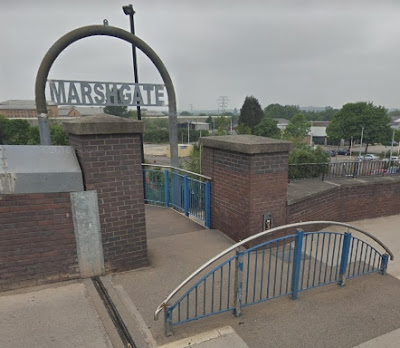 The bridge (over the East Coast main line) was rebuilt yet again ... 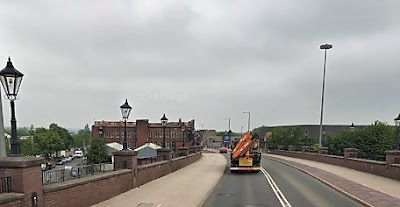 ... and is now superseded by a mega flyover to the right of the above shot. 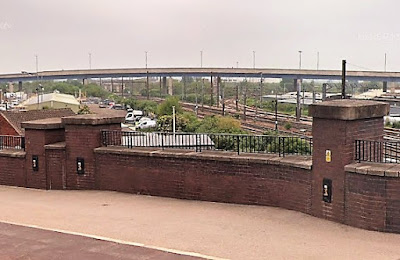 And finally to Torquay. Facing the eastern end of The Strand ... 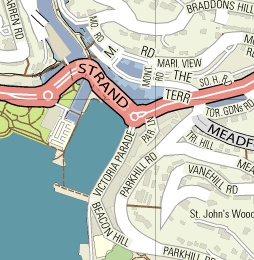 ... the old picture shows the installation of a tram junction, left into Babbacomme Road and right along Victoria Parade. 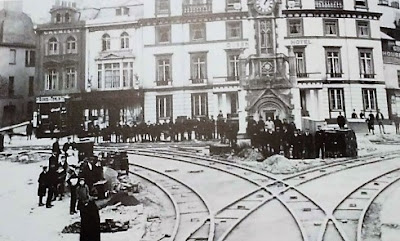 The building behind the clock tower has long since been replaced ... 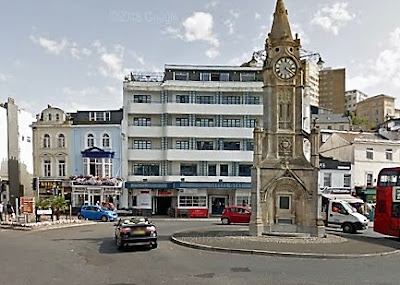 ... but the two shops on the left are relatively unscathed.

-o-o-o-o-o-o-o-o-o-o-o-
ADVENT CALENDAR 29
Of all the bits of the "traditional" Christmas narrative, the story of "the Magi" is the most corrupted and falsified.

Jesus was born in the town of Bethlehem in Judea, during the time when Herod was king. Soon afterward, some men who studied the stars came from the East to Jerusalem.

We are not told:-
how many there were.
what they were (definitely not kings)
how they travelled -  no mention of camels

And they didn't wear silly hats ... 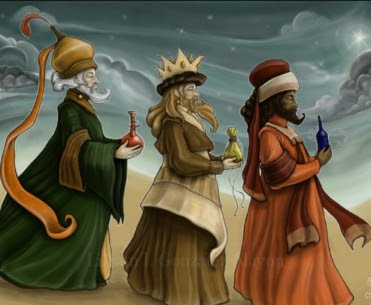 ... a really daft idea for a long, tiring and risk journey! fbb doesn't think they had curly beards either. Even if they were well groomed when they left "The East", they would have been pretty disreputable by the time they got to Bethlehem, even after a quick de-coke at the Palace.

After putting the fear of God (literally!) into King Herod, they continued to Bethlehem.

No one has any idea where their names (Gaspar, Melchior, Balthazar) came from or why they are depicted as being from different races. These names appear in about 650 AD - from nowhere!

... and when they saw the child with his mother Mary, they knelt down and worshipped him. They brought out their gifts of gold, frankincense, and myrrh, and presented them to him.

And when did they arrive? If Herod "at Bethl'em in his fury" ... 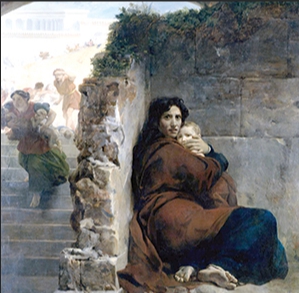 ... killed the boys aged 2 and under, we may assume that their arrival was up to two years after the birth.

So Jesus was a toddler, not a baby; a child of approx 2 years of age. 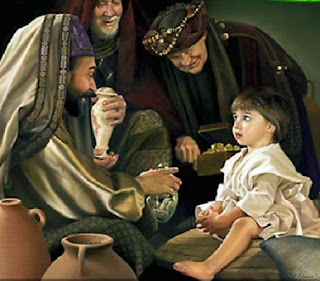 What seems very clear is that they gave Jesus some incredibly useless, even laughable gifts.

But Matthew was anxious to explain the whole truth about CHRISTmas. Hence the three weird (but VERY expensive) visual aids. 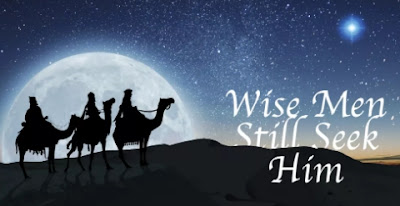