fbb Gets It Wrong Again!!

Your assuming author though that correspondent Roy did not travel from Sheffield to Lincoln on the Saturday of the Christmas Market due to a passenger pleasing day of (in) action by the lads and lasses at Northern Trains. But Roy is made of sterner stuff. His schedule for the Saturday was as follows.


Without the reduced service on strike days, Roy might have left Sheffield at 0735 and arrived in Lincoln at much the same time. 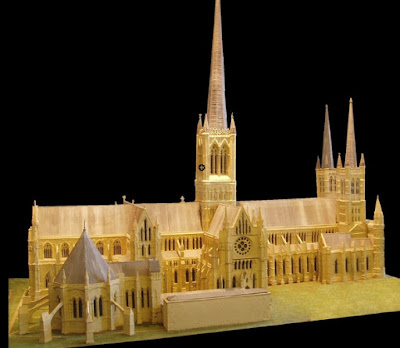 At one time equipped with three spires, the Cathedral was for many years one of the tallest buildings in the world and definitely the tallest by far in the UK but it lost that place when the central spire collapsed! 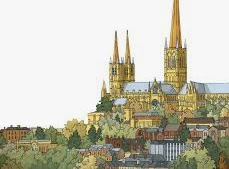 The other two spires were also subsequently removed, but there seems to have been some disagreement amongst artists as to how tall they actually were. 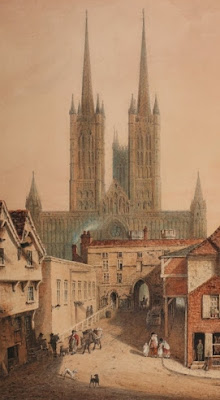 Even spire-less, the building is truly magnificent and forms a glorious backdrop to the annual Christmas Market. 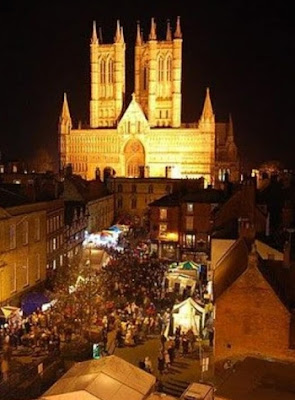 Stagecoach is the main operator of buses for the car-less market site. Cleverly, their normal service to the area (routes 7 and 8) ... 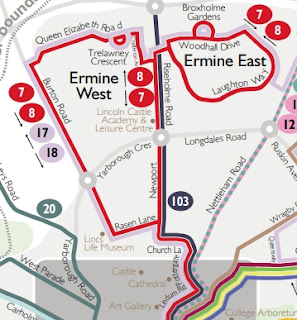 ... pass close to the cathedral with a stop at the medieval Bar 67. 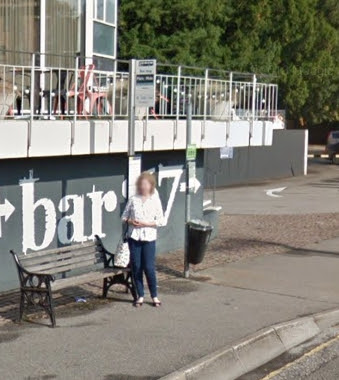 This stop is at the city end of Nettleham Road. These two routes offer a bus every 10 minutes from the bus station which is close to the Railway station. Stagecoach produced a special leaflet for the Market period ... 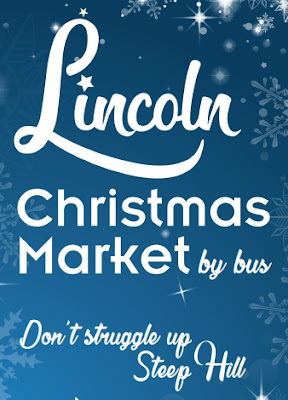 The Market service is much enhanced compared with the normal schedule to Ermine estates, especially in the evenings and notably on Sundays ... 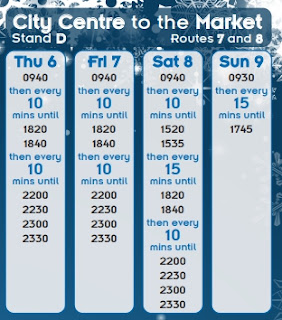 ... when normality is a half hourly 17/18 portmanteau circular. 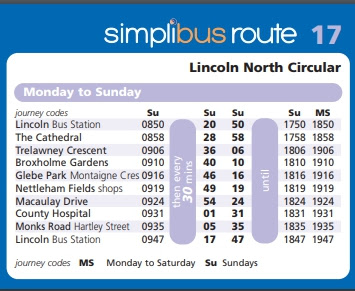 Clearly, on Sundays, the Market shuttle is additional to the "simplibus" offering.

Timings on Mondays to Saturdays are the same, but it appears that double decks are provided ... 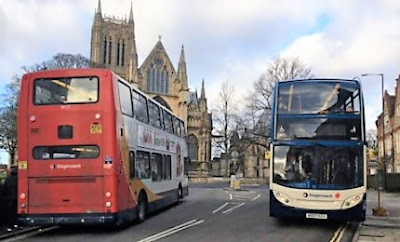 ... in place of the more usual vehicles. 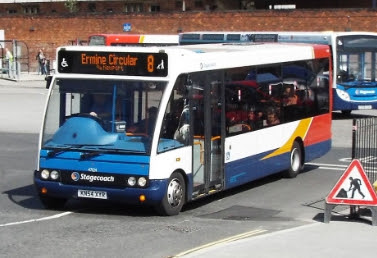 Roy did not reveal whether these "shuttle" buses were always extra to the scheduled 7/8 service, but the existence of a "dolly" stop in the double deck picture above suggests that many trips were duplicates. 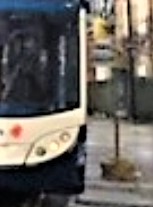 Buses could turn round at the roundabout? 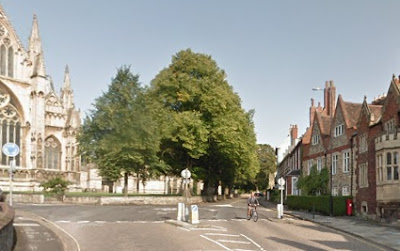 In addition to their service buses, Stagecoach also operated a Park and Ride from the Lincolnshire Showground somewhat further north of the Cathedral on the old A1, now the A15. 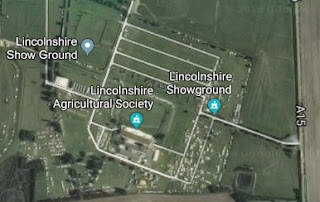 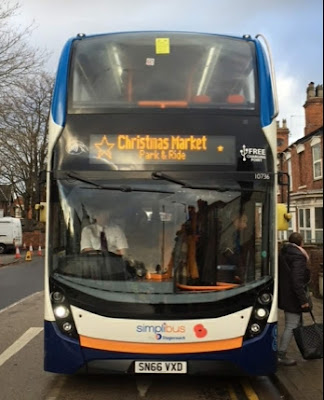 ... ran every 15 minutes. One vehicle had its very festive driver. 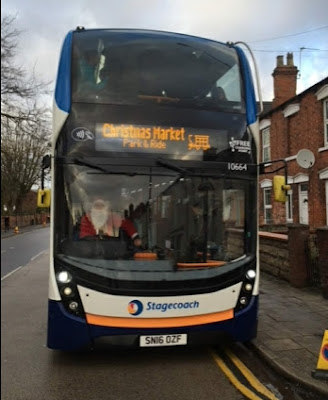 There was one other bus in use at the Market ... 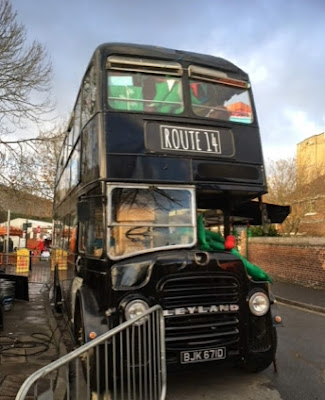 ... selling beer and other alcoholic beverages. The bus is ex Eastbourne ... 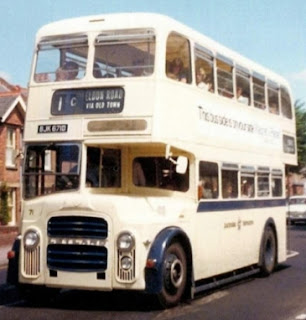 ... where, latterly, it wore an "all cream" livery - much nicer than the beer bus' black.

As far as fbb can tell, remotely, the Market was, once again, well attended and successful. Despite the efforts of Northern Trains' staff to mess it up on the Saturday, public transport did a jolly good job. As Young Mr Grace was wont to say ... 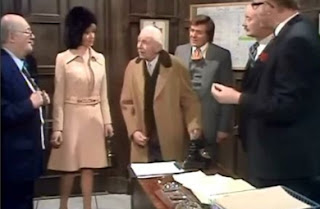 ... "You've all done very well!".
-o-o-o-o-o-o-o-o-o-o-o-
ADVENT CALENDAR 15
It is amazing how "tradition" has been promoted to something approaching fake news applied to every aspect of the traditional Nativity narrative. There is nothing wrong with a little artistic licence, particularly if it helps us understand what went on,

But so much of the so-called "Christmas Story" misleads and gets in the way of our understanding.

From a Biblical point of view the event was never headline news. Mark and John ignore the birth of Jesus completely because it was of only minor importance to the last three years of his life.

Matthew was writing for fellow Jews and sought to convince them that the baby was, indeed, the expected and promised Messiah.

Luke (the Doctor) was writing for non-Jews and always focuses on the way in which The Christ changes the lives or ordinary folk. Hence a focus on Mary and her relative Elizabeth and the visit of the low life (shepherds) to see the baby. 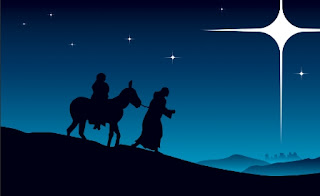 So, where did the donkey come from? And they didn't follow the star! And she wouldn't have word blue. Blue cloth and donkey hire (or ownership) were both expensive. It is most likely that they both walked 90 miles. 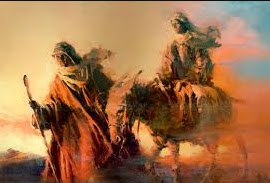 Heat during the day would have been a problem so travelling would have been in the evening and at dawn. The nights would have been cold and the risks from robbery considerable. Historians suggest that Joseph and Mary both walked and that the journey might have taken well over a week at best, probably longer in view of Mary's condition.

It was not a "pretty" journey at all. It was a real pain in the neck - and in a lot of other places too!

And that is all that Luke tells us about the journey. NO DONKEY.

All the rest of the clutter may be "nice", but it is not CHRISTmas.

Even when they get to Bethlehem, the fake news continues to obfuscate the simple but remarkable entry of an infinite God's "Son" (Immanuel - God with us) into the restrictive bounds of human experience.

There is just one piece of ancient monochrome on-line which attempts to get it right. In an extract via Getty images, the puppets are shown as walking to Bethlehem. 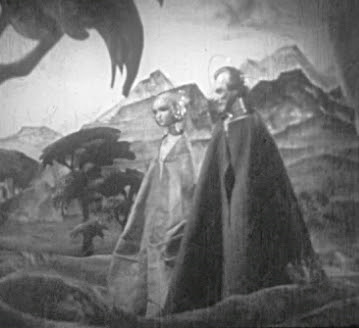 to include the quiz answers from a week ago
Posted by fatbusbloke at 02:00