When Mrs fbb's father was looking for a job (in 1913), he wanted to start work in a cinema but his parents advised against it as "it would never catch on".

Are we in a similar position with driverless cars which, to make then sound less frightening, we are now encouraged to call "autonomous vehicles"? Recent experiments have usually been on some sort of "reserved track" or short distance runs on a very supervised road.

Autonomous buses (on public roads) have not yet been evident but news broke a short while ago about Stagecoach's participation in the first UK trial for real. 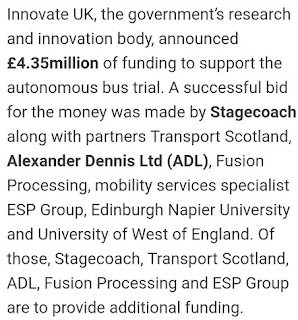 So what is being planned? 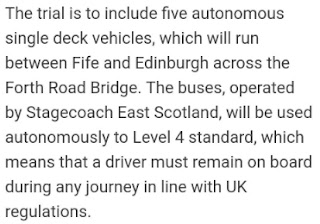 In order to put this into context, we need to remember what has happened at the Forth Bridge. 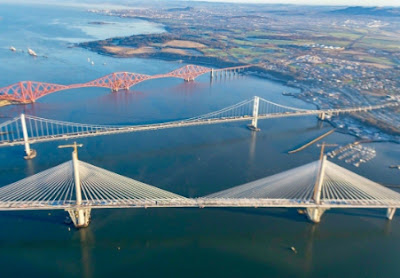 The original road bridge (in the centre above) was opened in 1964 and replaced the Queensferry ferry. This venerable service could not cope with growing numbers of cars ... 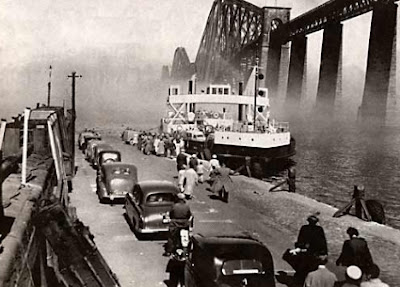 ... and a bridge became absolutely necessary. But the much celebrated and equally venerable old lady itself was showing signs of old age ... 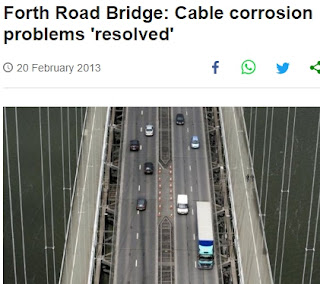 ... and a second bridge was built. Called the "Queensferry Crossing" this is now part of the M90 and has left the old structure ready for partial retirement. Scotland's transport gurus came up with an innovative plan too use the old bridge for buses and taxis only, effectively one long an beautiful bus lane over the oft-turbulent waters of the Forth

The three screenshots below show the system. From Ferrytoll Park and Ride (ORANGE LINES) 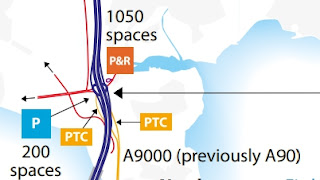 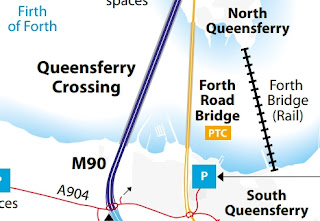 It is on these roads that the experimental autonomous buses will run ... 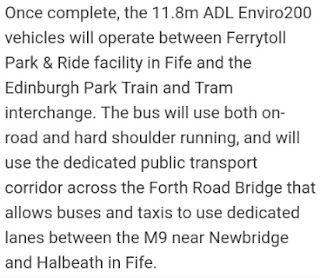 ... but, as mentioned above, WITH a driver. That's "level 4". fbb has simplified these categories to save space (and tedious reading) - full information is available on-line.

Level 0: What we do now. Normal driving.

Level 1: This driver-assistance level means that most functions are still controlled by the driver, but a specific function (like steering or accelerating) can be done automatically by the car.

Level 2: In level 2, at least one driver assistance system of "both steering and acceleration/ deceleration using information about the driving environment" is automated, like cruise control and lane-centring. It means that the "driver can hands off the steering wheel AND foot off pedal at the same time." The driver must still always be ready to take control of the vehicle, however.

Level 3: Drivers are still necessary in level 3 cars, but are able to completely shift "safety-critical functions" to the vehicle, under certain traffic or environmental conditions. It means that the driver is still present and will intervene if necessary, but is not required to monitor the situation in the same way it does for the previous levels. The driver is NOT expected to intervene in an emergency!

Level 4: This is what is meant by "fully autonomous." Level 4 vehicles are "designed to perform all safety-critical driving functions and monitor roadway conditions for an entire trip."  In the UK a driver is required to be present to perform certain functions not covered by the technology. (Access to "normal" bus stops? Turning manoeuvres at a terminus? Parking the bus?)

You are right. The difference between level 3 and level 4 is not very clear as explained above. But technically there IS a significant difference. (?)

Level 5: This refers to a fully-autonomous system that expects the vehicle's performance to equal that of a human driver, in every driving scenario - including extreme environments like dirt roads that are unlikely to be navigated by driverless vehicles in the near future.

Tomorrow, fbb will take a closer look at the propose route. In the meantime have a smile at the picture of the five new buses that the press carried as an illustration to this news. 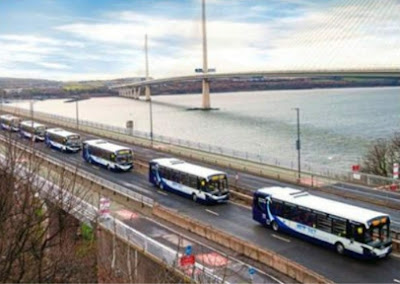 -o-o-o-o-o-o-o-o-o-o-o-
ADVENT CALENDAR 5
Isn't our noble author being a bit "bah humbug" here? Surely there is plenty of justification for CHRISTmas presents?

Biblically (which is the only written evidence available) the cattle shed was empty. Of course it was; the animals were outside. The nights may have been chilly for humans, but no ox, ass or camel was present.

So they hurried off and found Mary and Joseph and saw the baby lying in the manger. When the shepherds saw him, they told them what the angels had said about the child.

That's all there is - no gift of a lamb!

Aha, some will cry, "the wise men brought gifts."

Absolutely, but not to the baby Jesus and not to the cattle shed. And NOT on camels!

Gift giving has always been part of various celebrations; Christmas, Easter, Birthdays, Other Anniversaries, Weddings, Engagement, A New Baby etc. etc. but CHRISTmas adopted the idea for other pagan and social sources.

Christine Rossetti got one thing right however, "Yet what I can, I give Him - Give my heart."

Next autonomous blog : Thursday 6th December
Posted by fatbusbloke at 02:00