A Midland Region rail timetable for the early pre-Beeching sixties shows the rail service via the so-called Port Road from Carlisle to Stranraer. 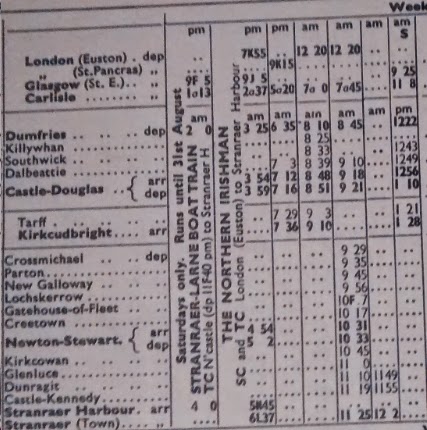 It shows a Saturdays only "boat train" from Newcastle, three all stations stopping trains, a few timings (from Dunragit) on the Glasgow and South Western Line, trains to Kirkcudbright** and (not included in the above extract) the sleeping car train from London Euston. 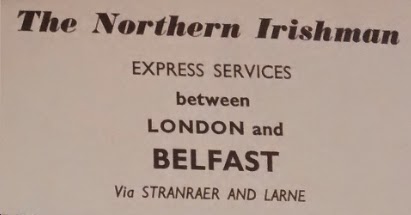 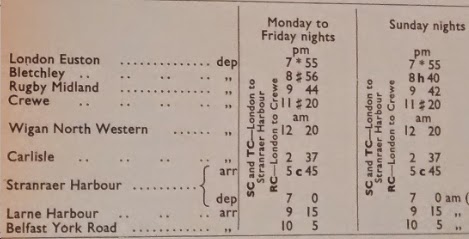 ... taking a smidgen less than ten hours to get to Stranraer for the 0700 ferry and a short crossing to Larne. The return sleeper ...

... was twenty minutes slower. The picture below is of a "black 5" hauling the up working over the Big Water of Fleet viaduct. 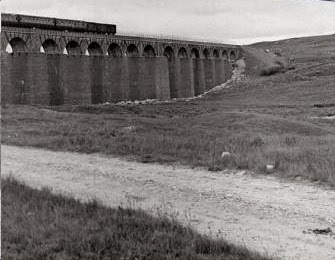 In remote countryside to the north of Gatehouse, the route spanned Big Water of Fleet by means of a 300-yard viaduct. In 1935, it reputedly starred in Alfred Hitchcock's film version of John Buchan's thriller 'The 39 Steps'. It also made an appearance in 'Five Red Herrings', a 1975 TV outing for Lord Peter Wimsey. It is hoped that it will eventually play host to an official footpath.

One of the other oddities of the line was the halt at Loch Skerrow between New Galloway and Gatehouse. It was literally in the middle of nowhere ... 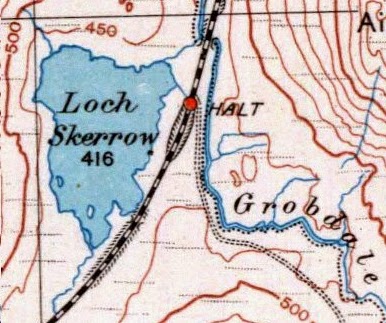 ... but trains would stop on request in the Summer only, presumably for the convenience (?) of walkers. 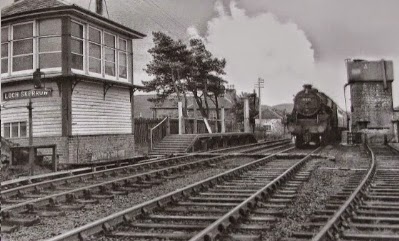 The stop existed originally as a source of water for locomotives on this steeply graded line; the tank (right) being replenished from the nearby loch.

The "Port Road" closed in 1965. The overnight sleeping car "boat train" continued to run via Kilmarnock until 1991.

A link from Carlisle remained in the timetable as a through daytime service from Newcastle, but it also ran via Kilmarnock. This service was withdrawn from the December 2009 timetable.

Today's much longer journey from London involves changing in Glasgow and sometimes additionally in Ayr and takes between seven and eight hours. 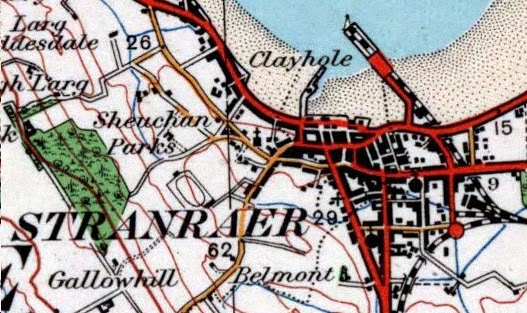 Notice, by the way, that the stopping trains from Carlisle ran to Stranraer Town; only the specific boat trains ran to the Harbour. The line continued southbound to Portpatrick; proposals to re-open the Town station and close down the line to the harbour have been debated for some time. Unfortunately the old station site is not much closer to the town centre than the present harbour terminus.

But, until relatively recently, you could still get off your train and walk swiftly up the gangplank and on to your ferry to Larne. 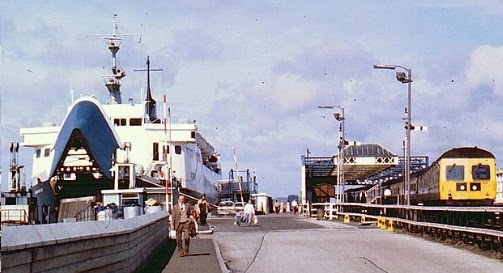 But, alas, no longer. How, then might an intrepid rail passenger make the short sea crossing in 2015.

We will continue to explore this transport challenge tomorrow.

** pronounced (for our overseas readers) Curr-coo-brie. The name actually derived from "The Church of St Cuthbert" i.e. Kirk Cuthbert!

Kirkcudbright has had a long association with the Glasgow art movement, which started when a colony of artists, including the Glasgow Boys and the famed Scottish Colourists, such as Samuel Peploe and Francis Cadell, based themselves in the area over a 30-year period from 1880 to 1910.

Many of them moved to the town from Glasgow, including E A Hornel, George Henry, and Jessie M. King, and their presence led to Kirkcudbright becoming known as "the artists' town", although town residents see the town as a "fishing town": as the town has a harbour, this soubriquet may have originated more from tourist-board publicity rather than local usage.

Landscape and figure painter William Hanna Clarke lived in Kirkcudbright and many of his works featured Kirkcudbright. 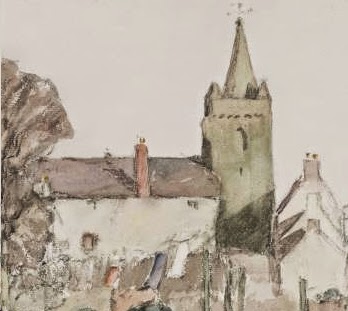 
Next rail/ferry blog : Friday 27th February
Posted by fatbusbloke at 02:00